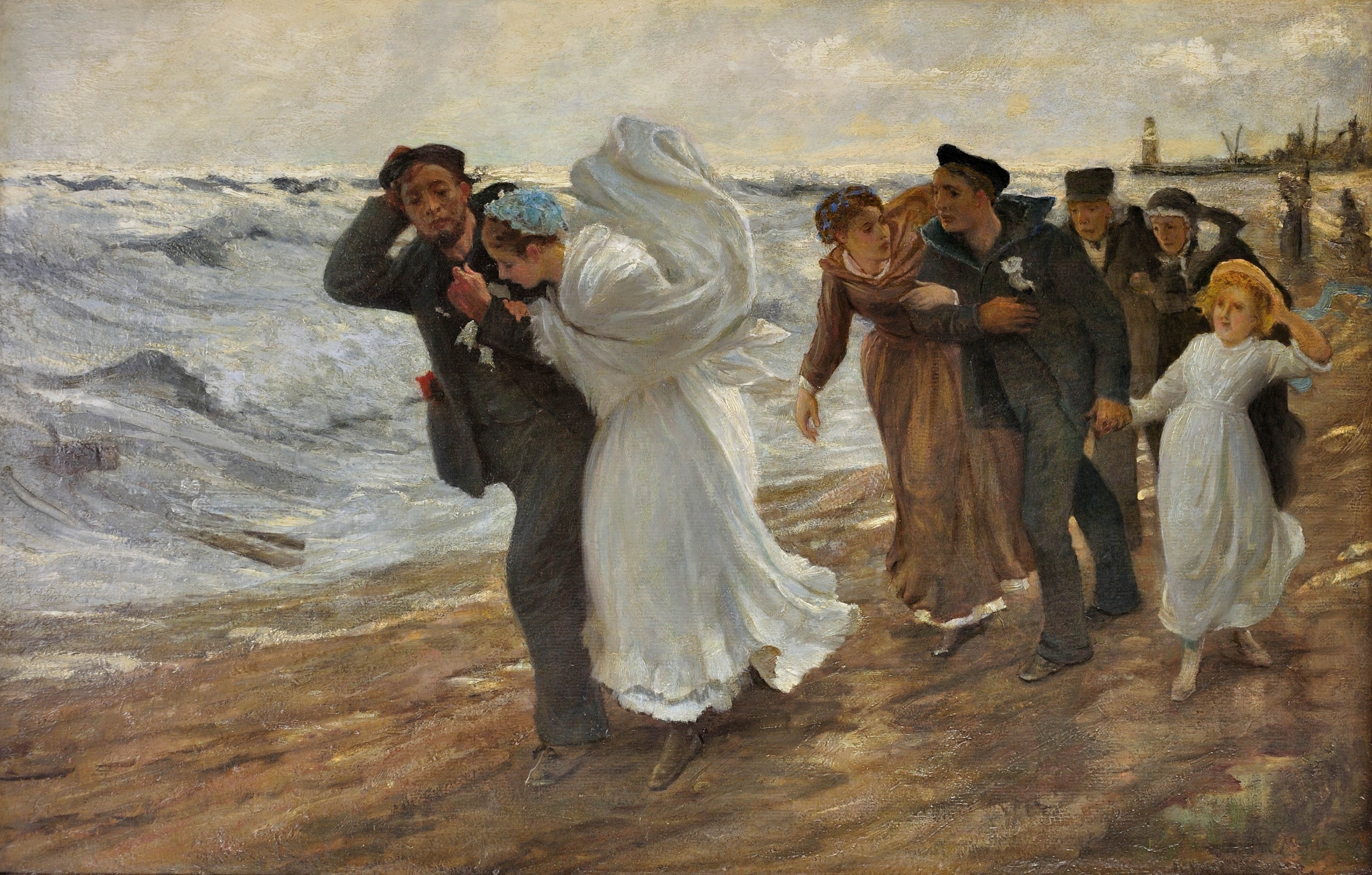 Available for sale from Big Sky Fine Art; this original oil painting by Philip Richard Morris dating from 1876.
The painting is presented and supplied in its original substantial ornate frame (which is shown in these photographs). The painted surfaces, the canvas and the frame have benefitted from cleaning and conservation, which took place in 2022 on our instructions.
This antique painting is in very good condition, commensurate with its age. It wants for nothing and is supplied ready to hang and display.
The painting is signed lower right.

Philip Richard Morris was a successful British Victorian painter of genre and marine subjects. His works in oil from the 1860s -1870s, including the piece offered here, are considered his finest.

Philip Morris was born on 4th December 1836 at Devonport, Plymouth, Devon. He was the youngest of five sons of John Summons Morris and his wife, Anne Saunders. His father was an engineer and iron founder, and it was expected that Philip would enter the family business. When he was aged 14 his father took him to London where he was apprenticed accordingly. However, Philip began to be fascinated by the plates he saw in periodicals and became more and more interested in art. For five years he practised art in his spare time whilst doing manual work during the days. His talent was recognised though, and when William Holman Hunt intervened on his behalf his father eventually agreed that he should study art. Philip Morris then started drawing at the British Museum, and was admitted to the Royal Academy Schools in 1855. He was something of a star pupil there, winning silver medals for drawing, painting and portraiture. In 1858 he won a gold medal and travelling studentship for his painting “The Good Samaritan”. He used this to visit Italy and France, where he stayed until 1864.

In 1858 Morris submitted two paintings to the Royal Academy exhibition and, with only a few breaks, he continued to exhibit there until 1901. He also exhibited regularly at the Society of British Artists and, between 1877-1888, at the Grosvenor Gallery.

For his earliest works Philip Morris chose his subjects from the drama of the sea and the sailor’s life. It was his instinct for dramatic effectiveness and sentiment that made his art popular, both on the walls of exhibitions and in the form of engraved plates. The height of Morris’ success was in the 1860s and 1870s. Of Morris’ early paintings the best known are his seashore subjects, namely “Voices from the Sea” (1860), based on verses by Tennyson, “Drift Wreck from the Armada” (1867) and “The Sailor’s Wedding” (1876); the painting offered here is accordingly a recognised example of his superb work during this period.

Morris’s most popular work of all was “Sons of the Brave” (1880), which showed the orphaned boys of soldiers of the Chelsea Hospital, emerging into the street as a musical band, a painting noted by a contemporary critic to be full of character and ability. This was one of his last great works, his later career being dominated by portraiture work but affected by his declining health and lack of confidence.

In 1878 Morris married a widow, Mrs Sargeantson, and they went on to have two sons and three daughters. Morris died on 22nd April 1902 at his home 92 Clifton Hill, Maida Vale, London and was buried at Kensal Green cemetery.

This original oil on canvas is a piece of exceptional quality and impact. It depicts the wedding of a sailor in a small coastal community, no doubt based on his early life in Devon. The sailor leads his bride along the shore, with the rest of the wedding party following, walking on the wet sand of the beach with the waves of the ocean roaring only a few feet away. On the shoreline in the distance, we see some commercial buildings, including a lighthouse; perhaps a beacon to show the way. We can tell that the weather is challenging, with a sharp breeze and frothy, rolling waves on the sea. The sky above them is full of white clouds and shafts of sunlight. The sailor is wearing the simple clothing of his trade, namely dark trousers and jacket with a sailor’s cap, which he clutches to his head. He has a red handkerchief in his pocket and a white rosette on his jacket to mark the importance of the occasion. His bride is wearing a simple long white dress, and a white shawl that is dramatically swept up behind her by the wind, reflecting the arcs of the crashing waves. She has a simple blue headdress with flowers sewn in. She clings to her groom’s left arm and holds herself close against him. Behind the sailor and his bride are the guests of the wedding party; another young couple, perhaps a brother with his wife and child, a girl of around ten years of age. She is wearing a long white dress and a straw hat with a pale blue ribbon round it. We imagine that she is a bridesmaid and very excited to be part of the proceedings. Behind them is an older couple, no doubt the parents of one of the happy couple. The party walks in an informal procession, and we may surmise that as the bride and groom are walking together, they are returning from the local church where they have just been married. Overall, this is a touching and beautiful scene. It reminds us that a wedding can be a simple meaningful event, devoid of the trappings of excess and frivolity. The fact that the couple are clearly battling the elements together during this first married journey reflects the many challenges that they will face in their new life. As they lean in towards each other, and are supported by their friends and family, we have good reason to be optimistic for them. This is a magnificent painting, full of beauty, honest values and hope. 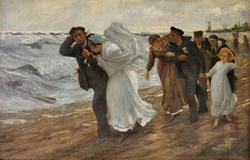