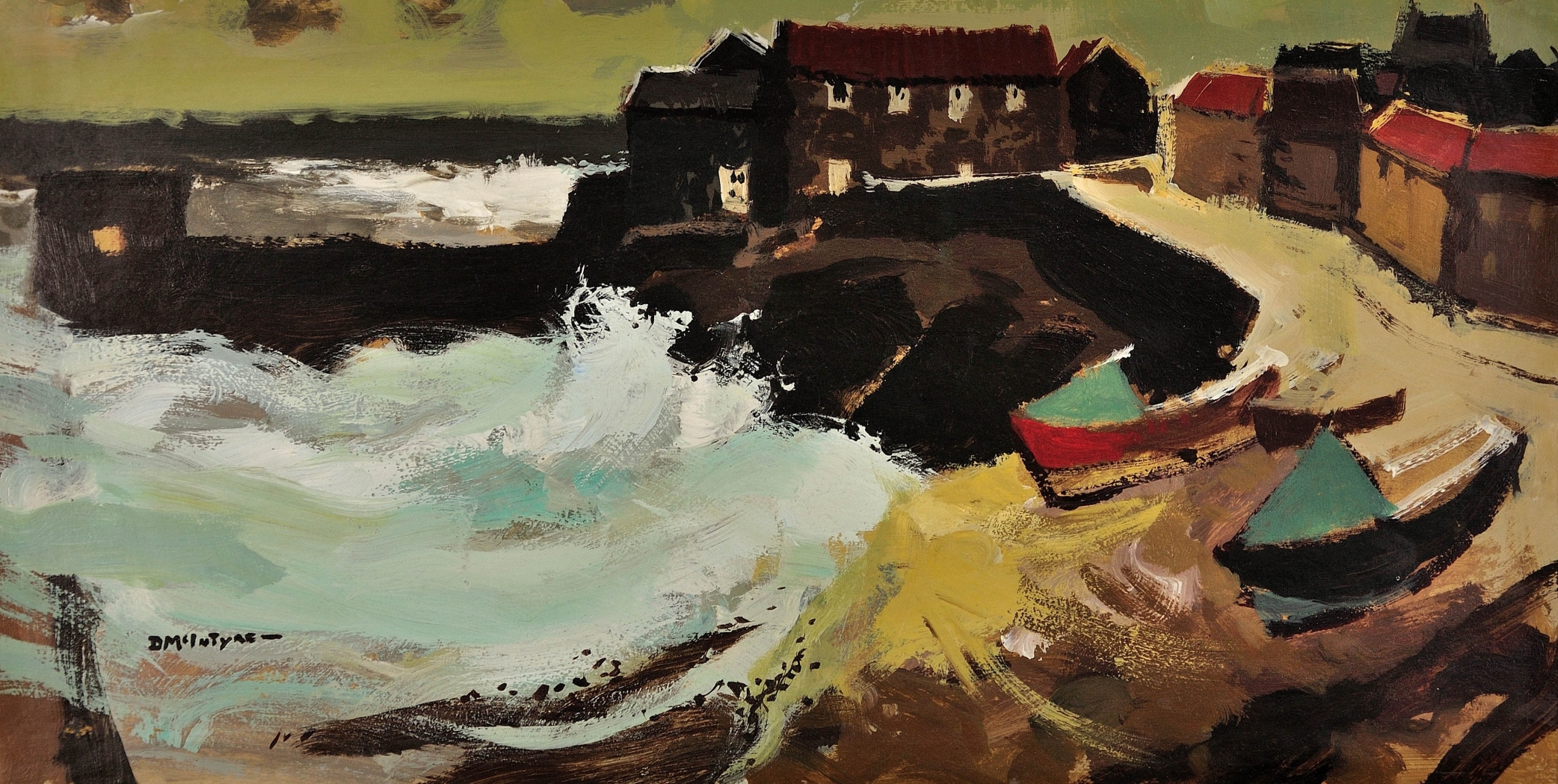 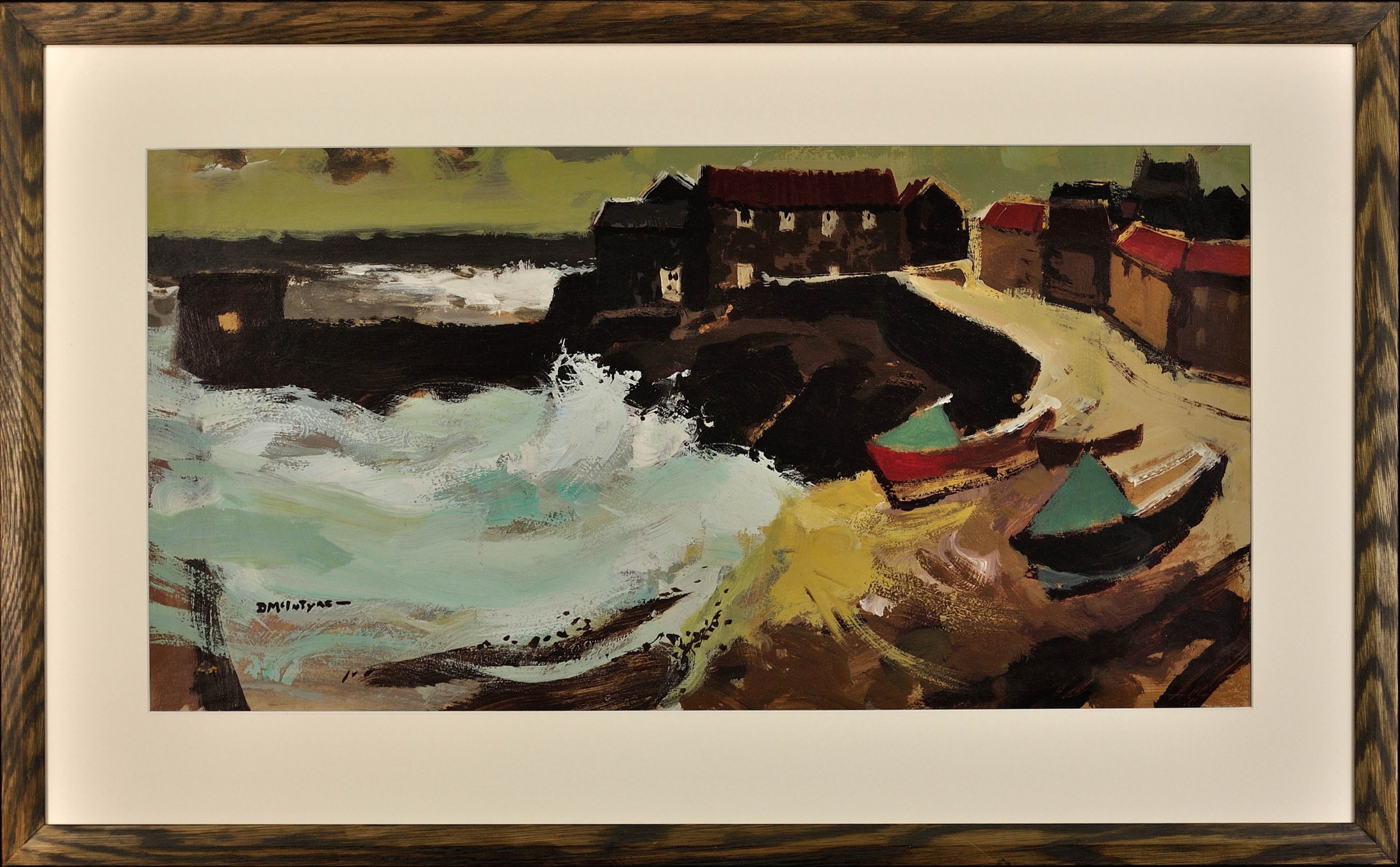 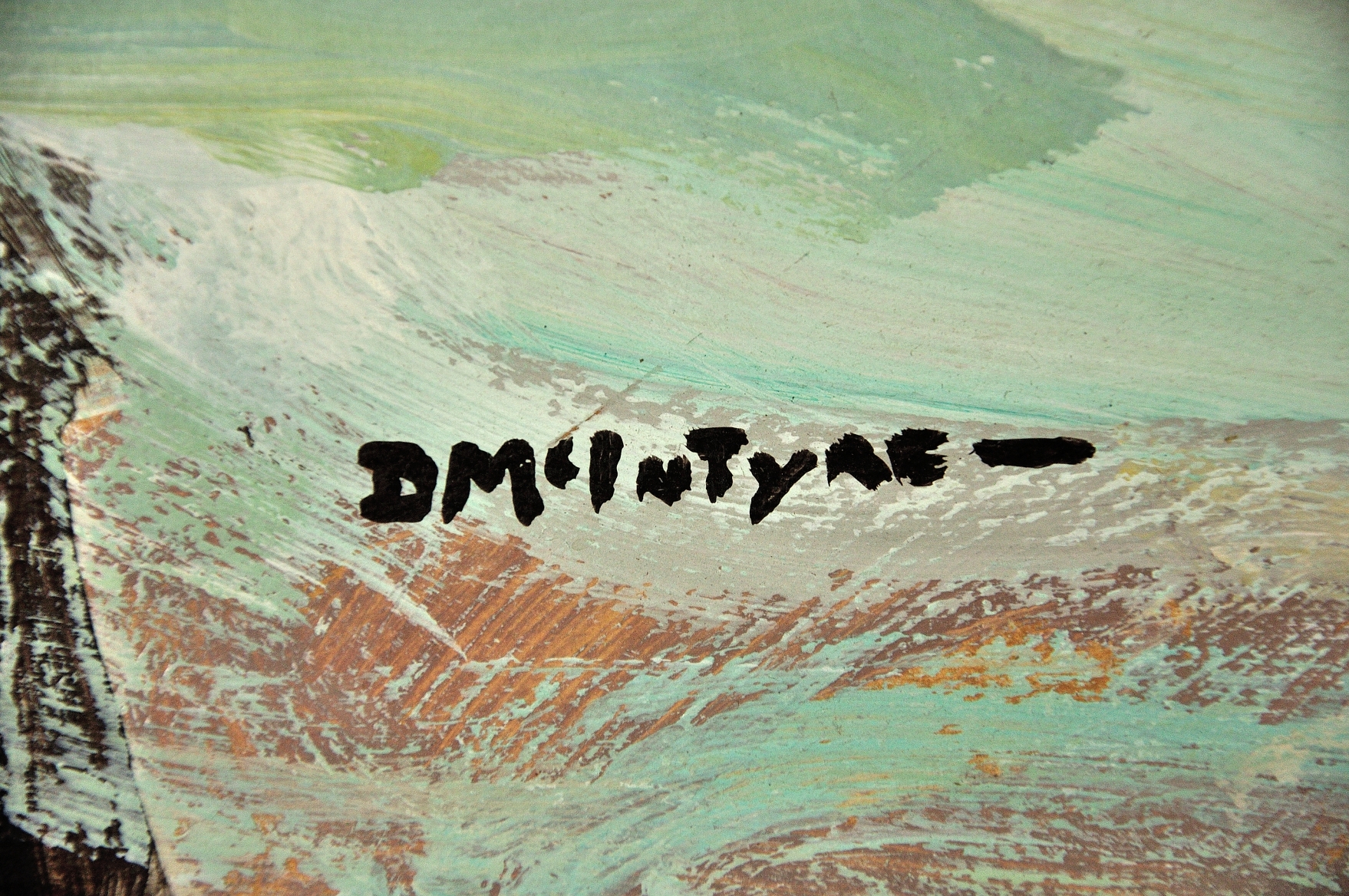 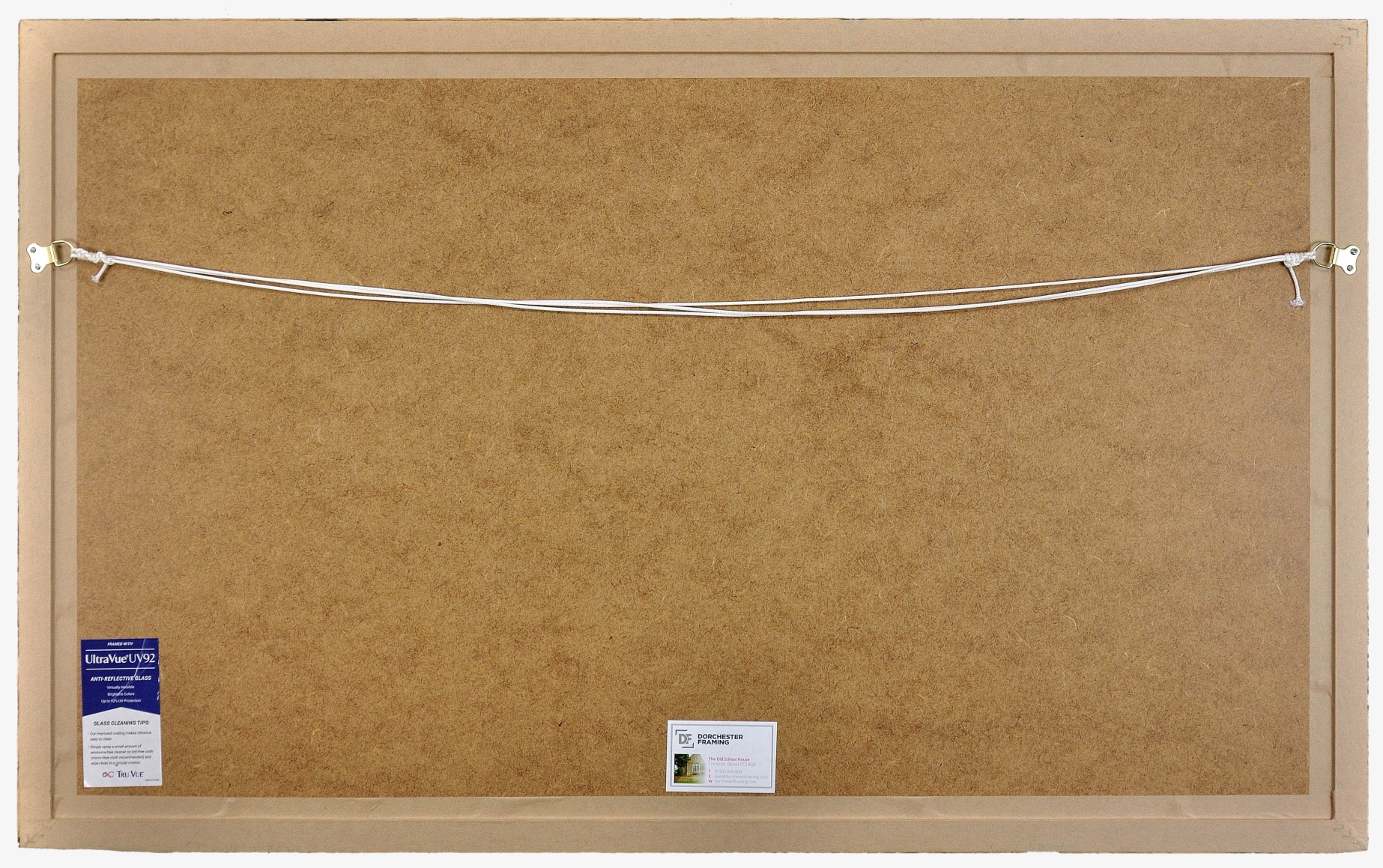 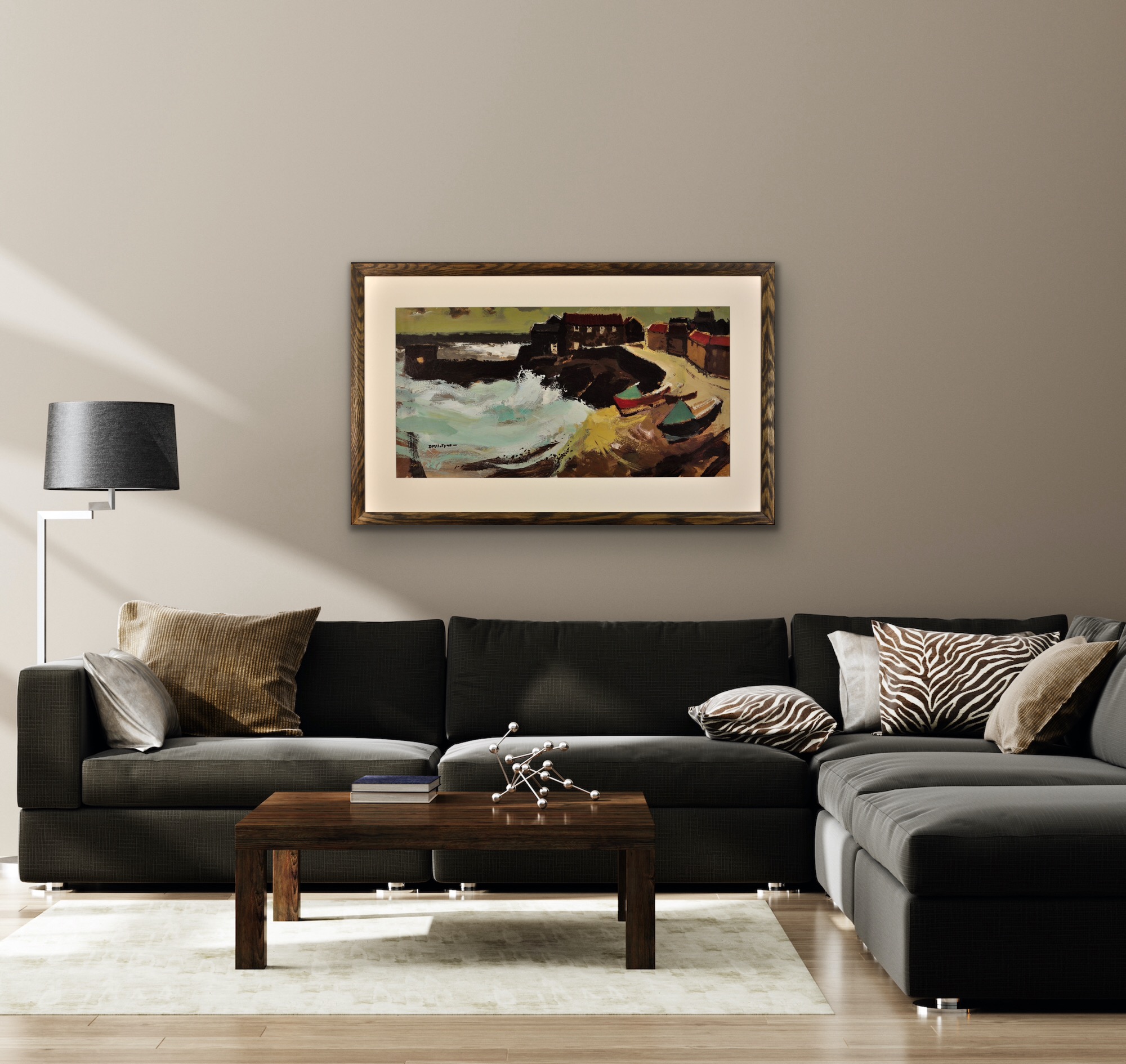 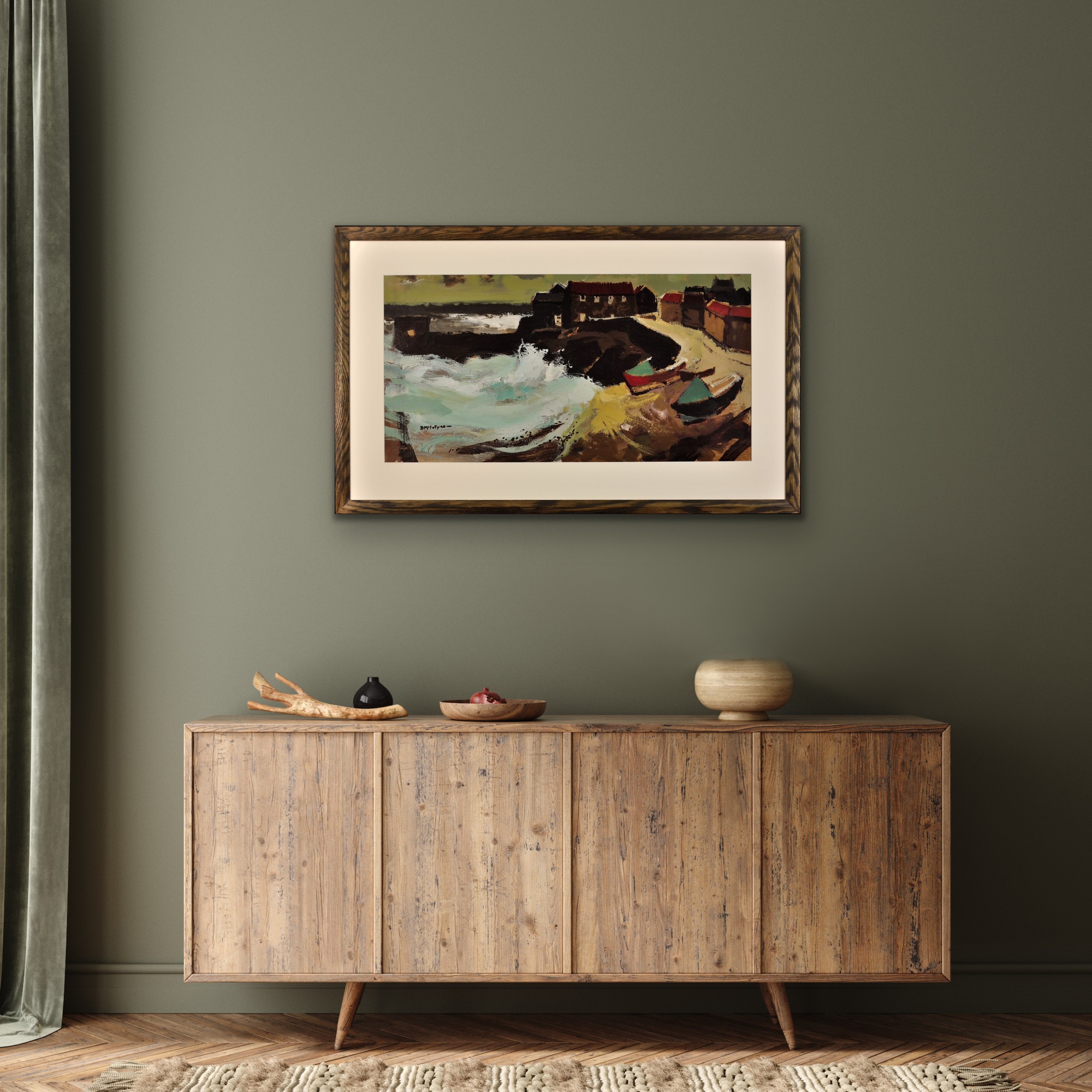 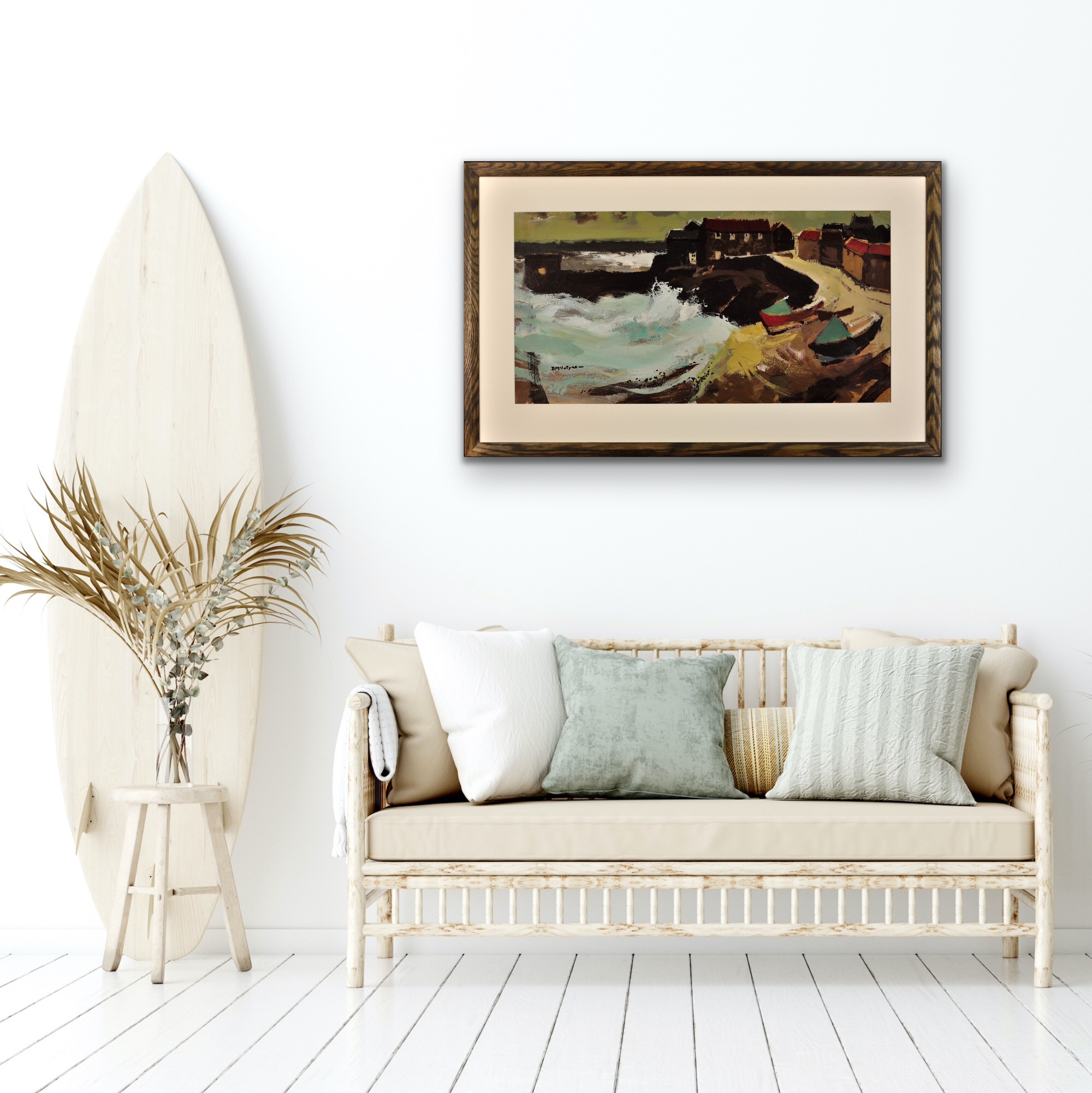 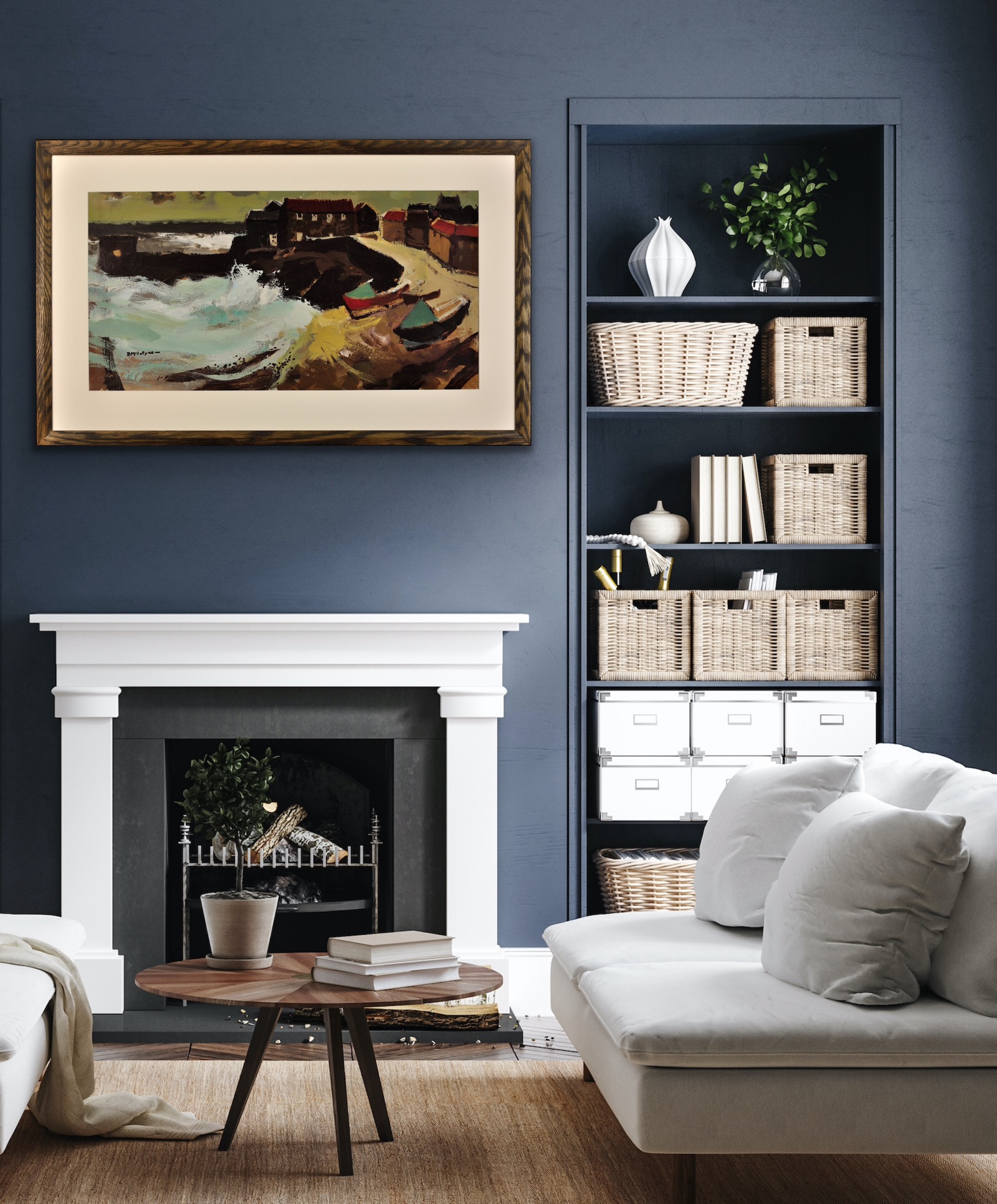 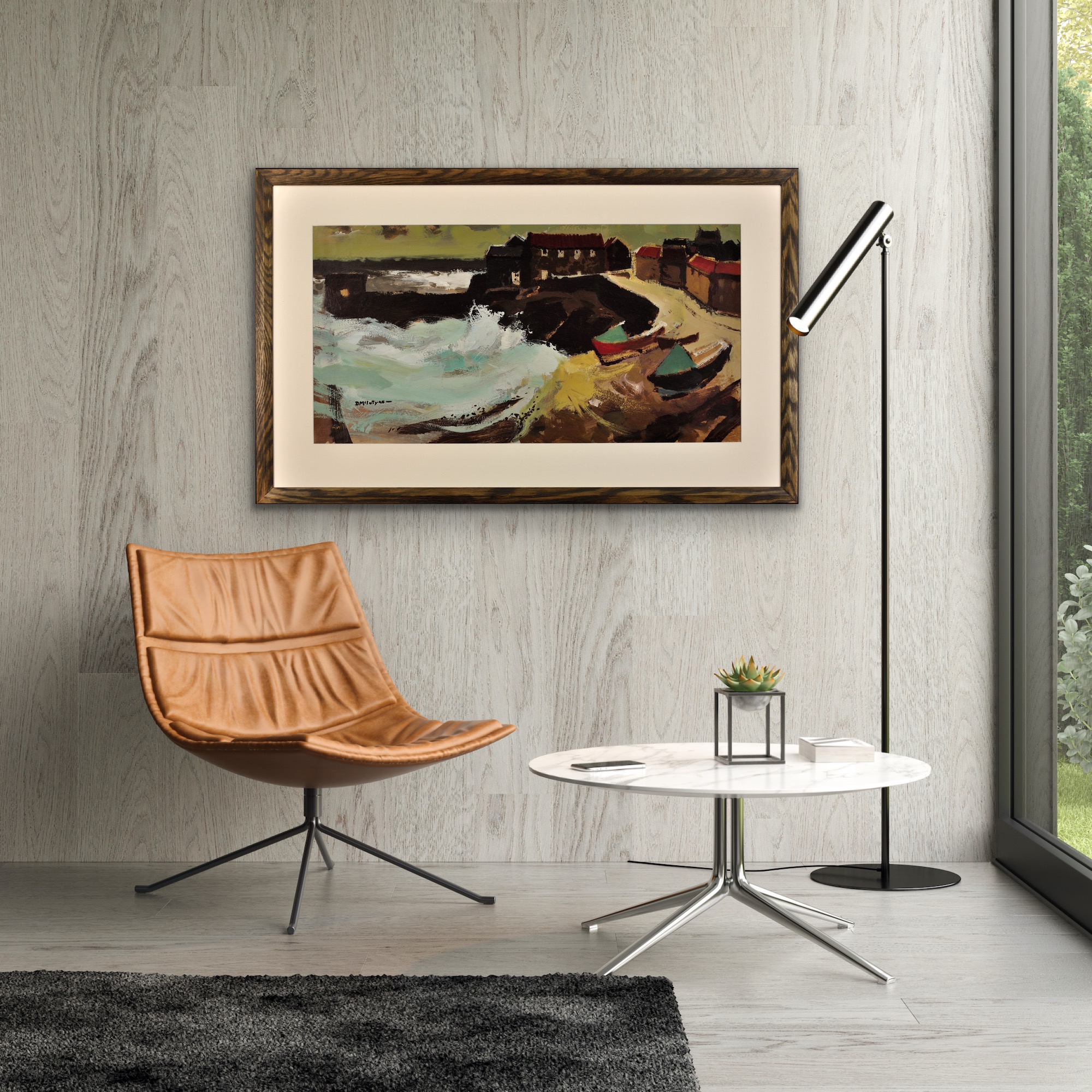 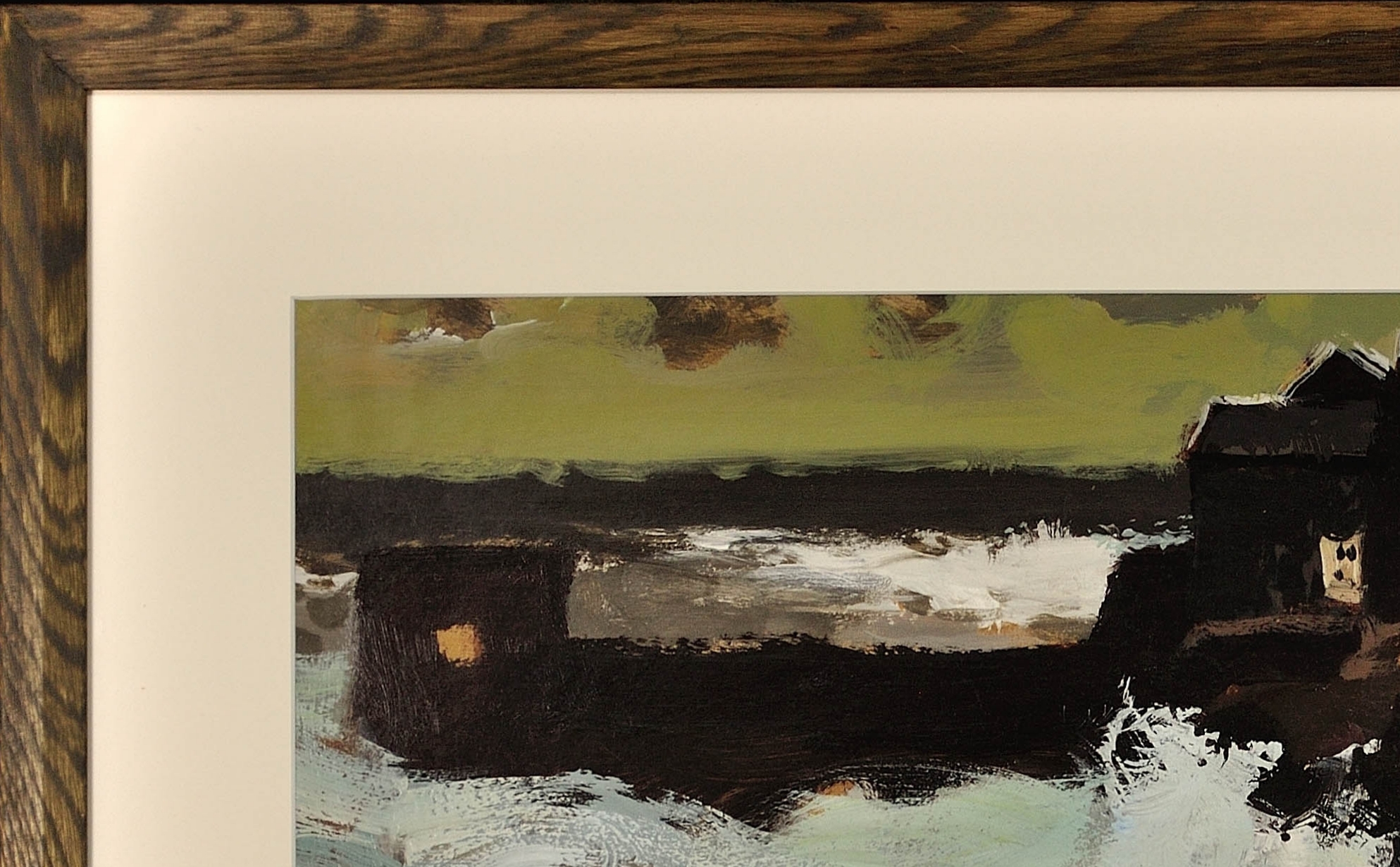 Available for sale from Big Sky Fine Art; this original oil painting by Donald McIntyre dating from around 1970.
The painting is presented and supplied in a sympathetic contemporary replacement frame (which is shown in these photographs), and behind premium anti-reflective glass with UV Protection greater than 92% Tru Vue UltraVue® UV92 glass.
This vintage painting is in very good condition, commensurate with its age. It wants for nothing and is supplied ready to hang and display.
The painting is signed lower left.
The painting is titled in the artist’s hand and signed on the reverse of the board on a piece of tape that is customary and usual for McIntyre. A photo is available upon application to view for any prospective buyer.

Donald McIntyre was one of the great British landscape and coastal artists of the twentieth century. His work demonstrates a strong post-impressionist style, often in his signature palette, and continues to command a strong following.

Although often thought of as a Welsh artist McIntyre was actually born in Leeds, Yorkshire in 1923. His parents were Scottish, and they returned to live in Scotland when Donald was very young, so he was brought up among the mountains, the sky and the sea of north-west Scotland. It was here that, perhaps unknowingly, his sense of colour was formed. It is this palette which later distinguished him from the other artists of Wales, where he lived and painted for most of his adult life. The best of his work contains his signature colours, layers of mauve, hues of bright turquoise, flashes of burnt orange. His paintings have a light and a life about them that make them joyful, uplifting and modern.

As a young man McIntyre attended Scarborough College and Skipton Grammar School. He did not intend to earn his living as an artist and so trained to become a dentist. He was however always a natural draftsman and whilst he was training at the Glasgow Dental Hospital, he was also taking evening classes at the nearby Glasgow School of Art, studying under James Wright RSW at Garelochhead. Having qualified as a dentist, McIntyre went on to serve in the army and later became an Educational Health Officer. In 1960 he moved with his family to Tregarth, a small village in the hills above Bangor in north Wales. For some years he visited remote schools as a Health Officer and painting only in his spare time. However, he continued to study, and received instruction from the Canadian Impressionist Gyrth Russell. Then, at the age of forty, he committed himself to art as his full-time occupation and his career began to take off. He worked very hard and brought to his painting the exuberant spirit of his Scottish upbringing and a sound appreciation of European art.

The late Sir Kyffin Williams RA said of McIntyre; ‘It is easy to see why he has succeeded for the spontaneous charm of his pictures and their unworried clarity make them eminently desirable. Mentally as well as professionally, Donald McIntyre is a true artist.’

Although he has painted a variety of subject McIntyre always returned to coastal scenes of the British Isles, particularly of Scotland and Wales. For many years he would travel the coast in his campervan, with his wife Lauren in support, and would make numerous sketches ‘en plein air’, which would become the basis of paintings to be completed back in his studio at home. He spent many summers painting on the island of Iona, where the light and colours perfectly suited his palette and style.

Donald McIntyre died in January 2009 after a period of ill health, during which he remained devoted to his painting.

Today he has a reputation as an upholder of the Scottish Colourist tradition which has made his work collectable well beyond Wales, or indeed Scotland. His work is represented in several public collections, including the National Library of Wales, the Welsh Contemporary Art Society, the Welsh Arts Council, the University of St. Andrews, Atkinson Art Gallery, Southport, Newport Art Gallery and the collection of Birkenhead Art Gallery. His works are also part of many distinguished private collections including that of London University, the US Embassy in London and the late HRH the Duke of Edinburgh.

This original oil painting by Donald McIntyre in entitled ‘Stormy Day, Craster, Northumberland’. It depicts the small village, about eight miles from Alnwick, on the east coast of Northumberland, with the waves crashing into the harbour. At the end of the harbour wall, we see the remains of a tower that was once a much taller building which was part of the overhead equipment used to convey the local stone from where it was quarried to boats in the harbour. The end of the harbour wall stands almost silhouetted against the bright flashed of the rough sea. There are two or three simple wooden fishing vessels pulled up onto the shore, leaving no boats in the water. This storm was perhaps anticipated. The modest houses on the shoreline seem to huddle together in the path of the elements. The palette here is typical McIntyre, with sharp signature notes of aquamarine and yellow, contrasting against the earthy tones of the shoreline. This is a piece with both gravitas, flair and spontaneity. 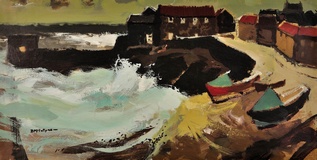