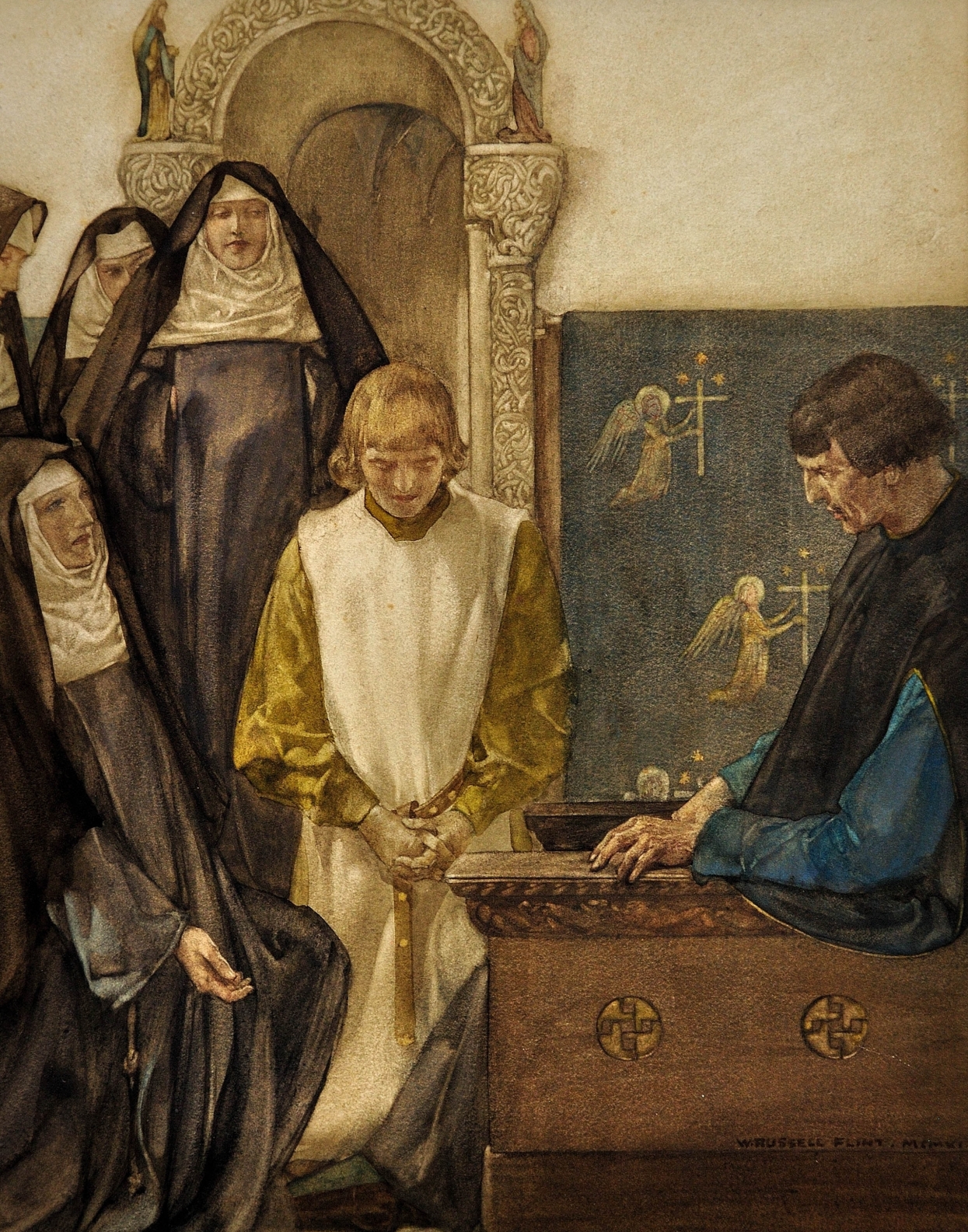 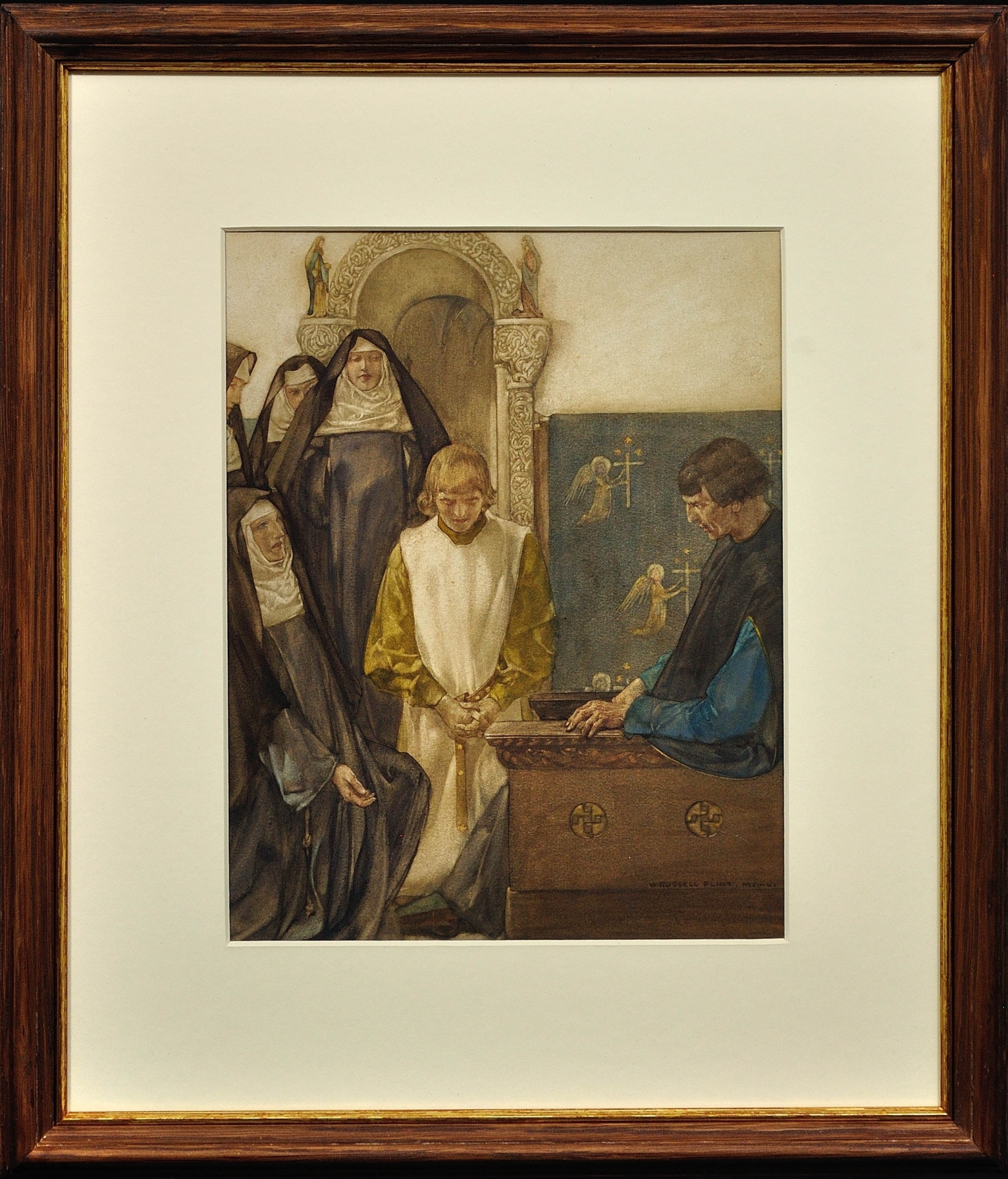 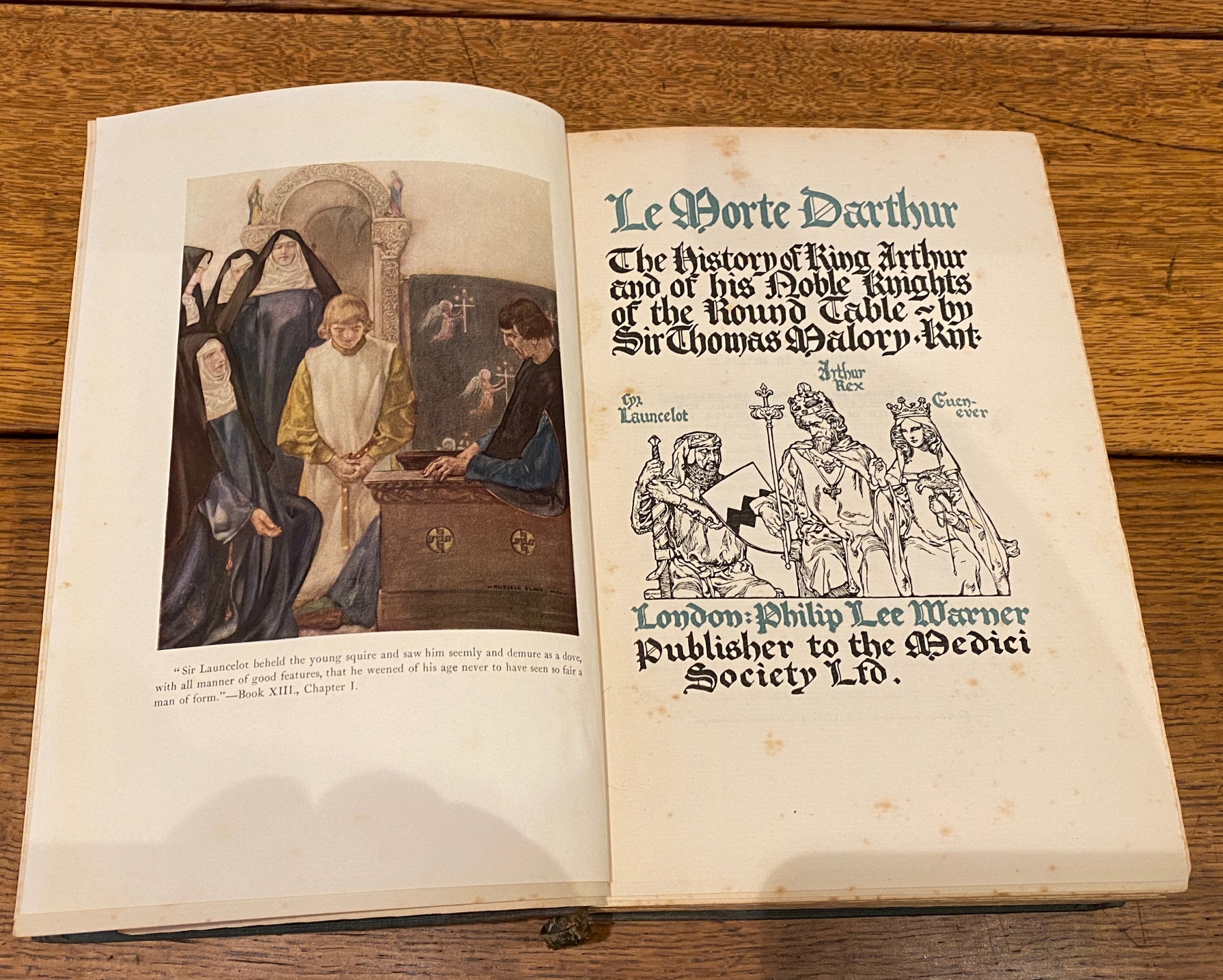 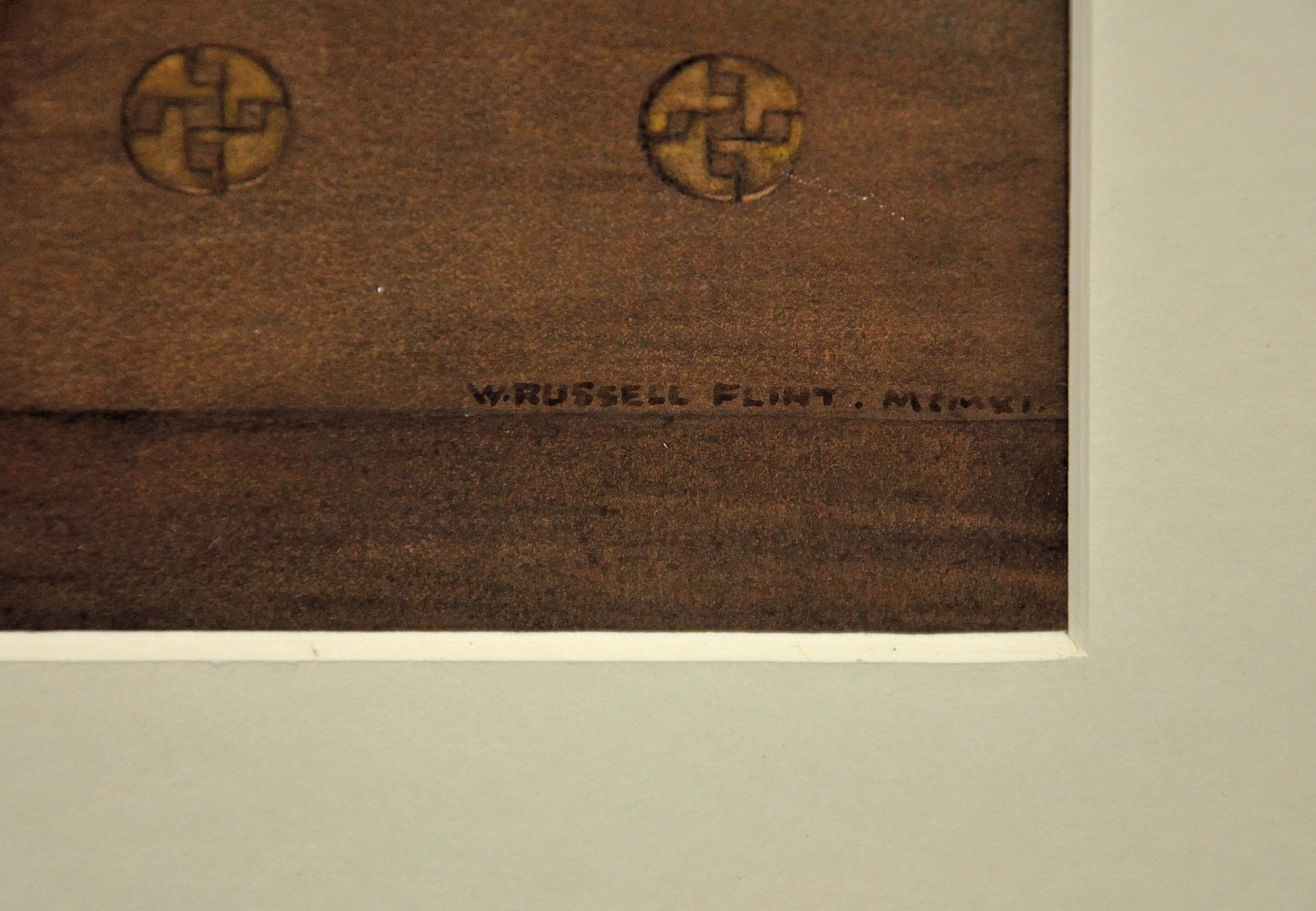 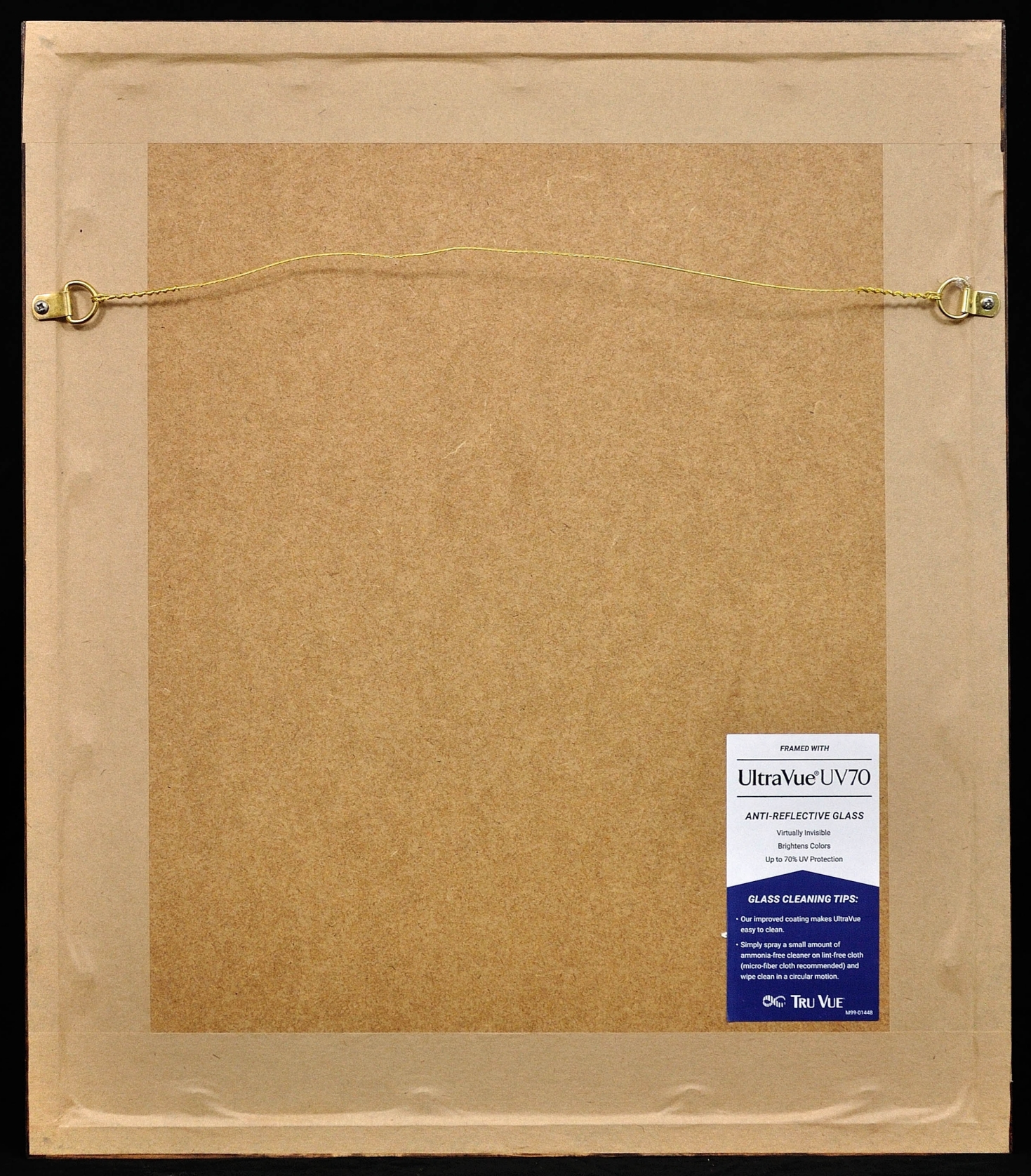 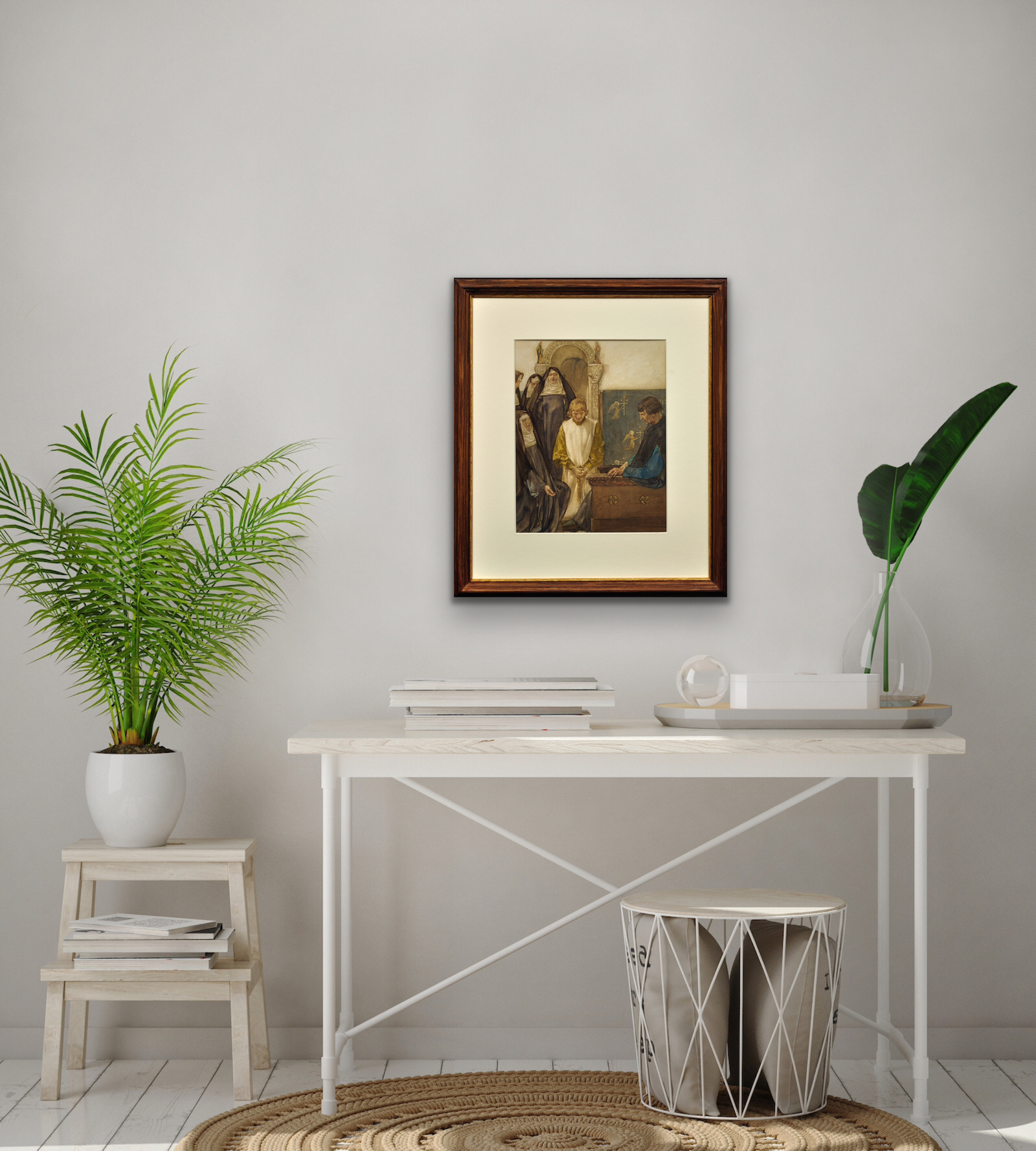 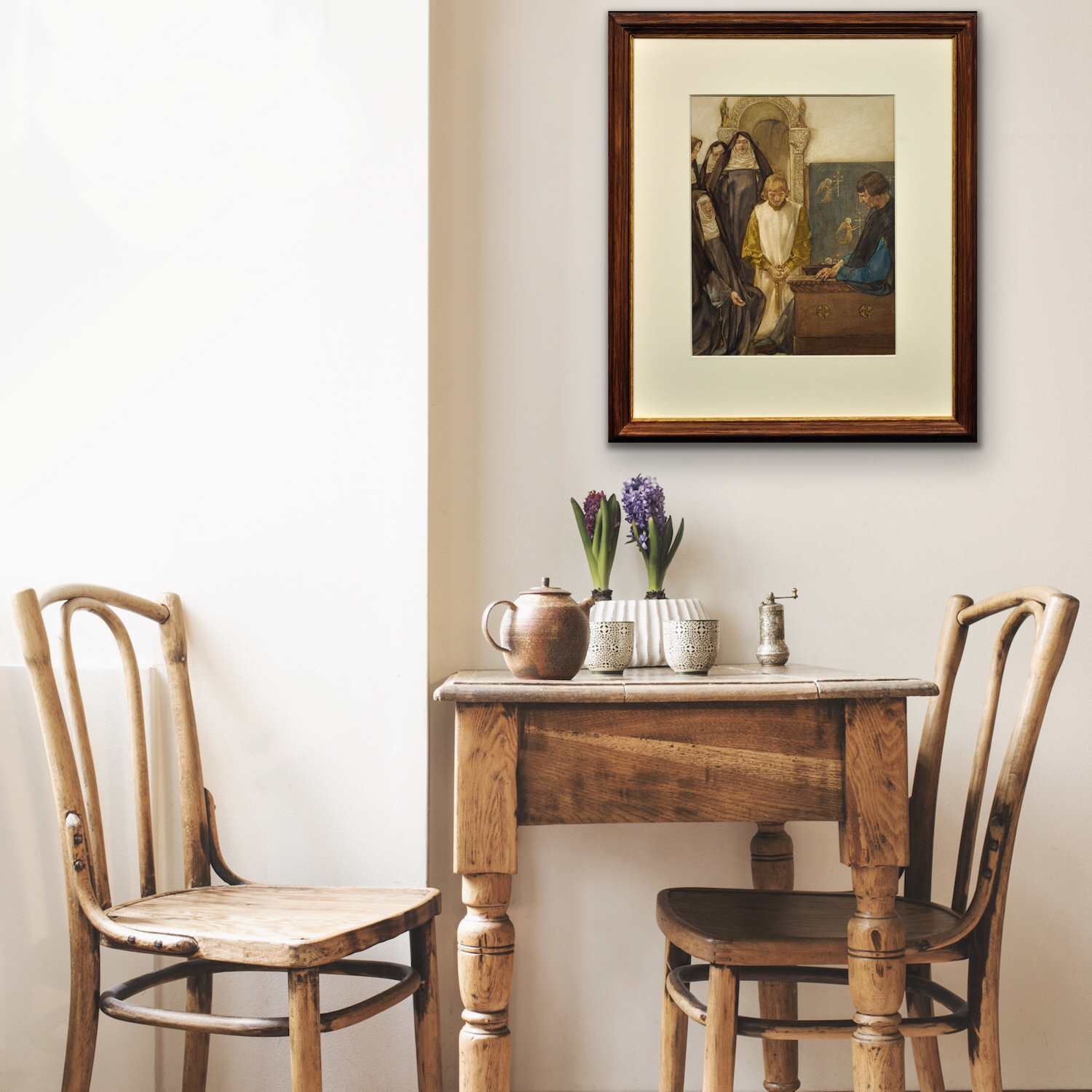 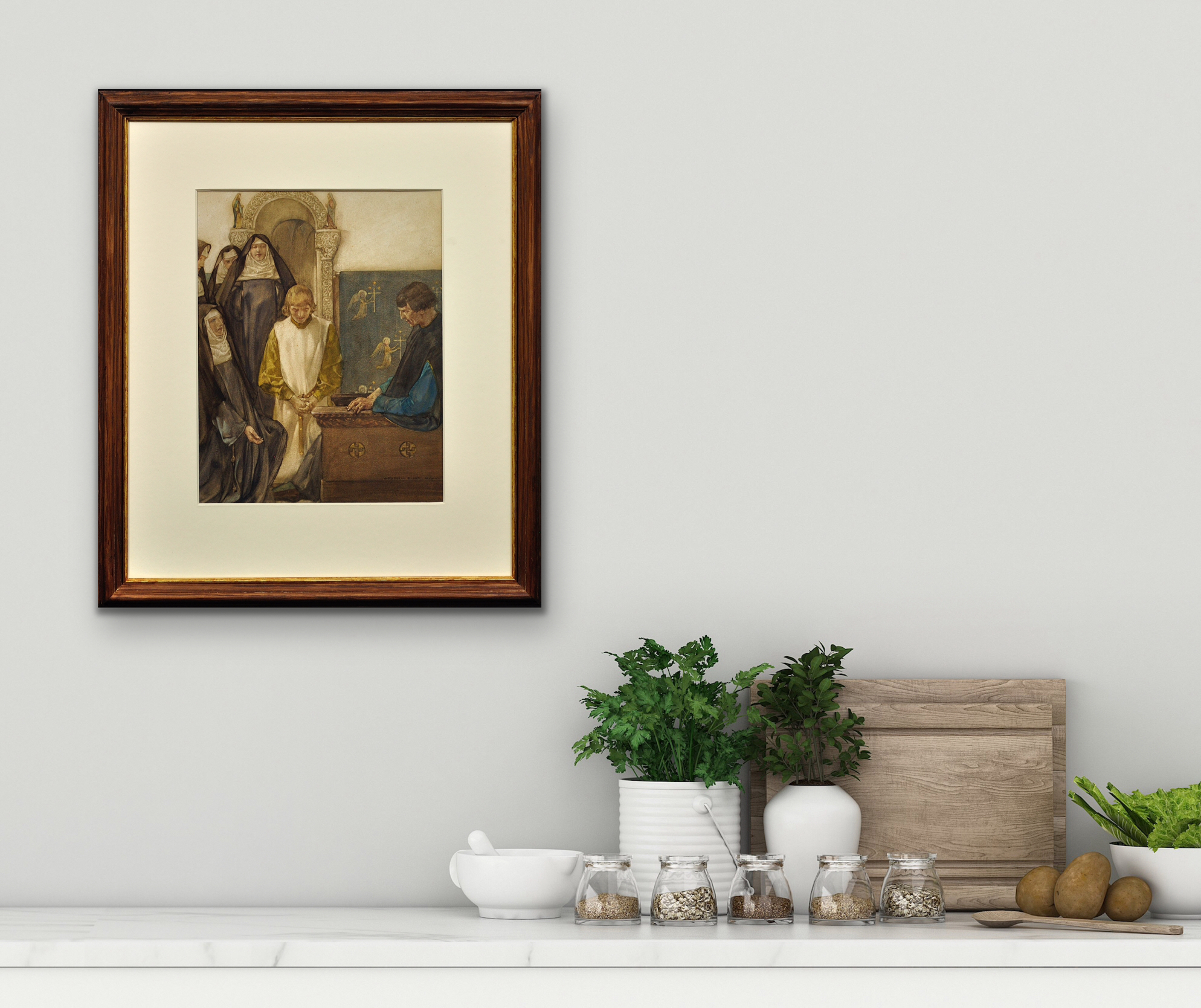 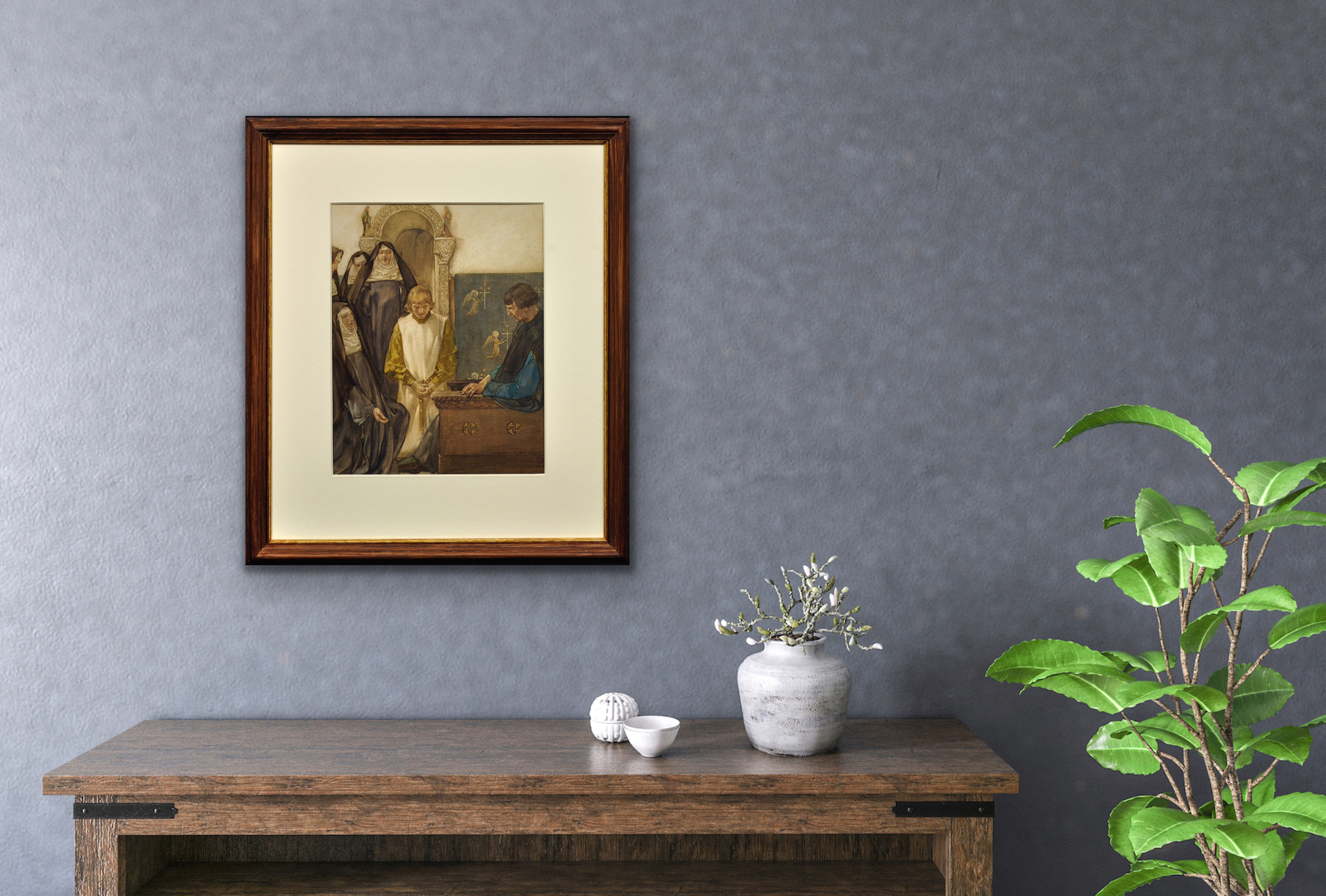 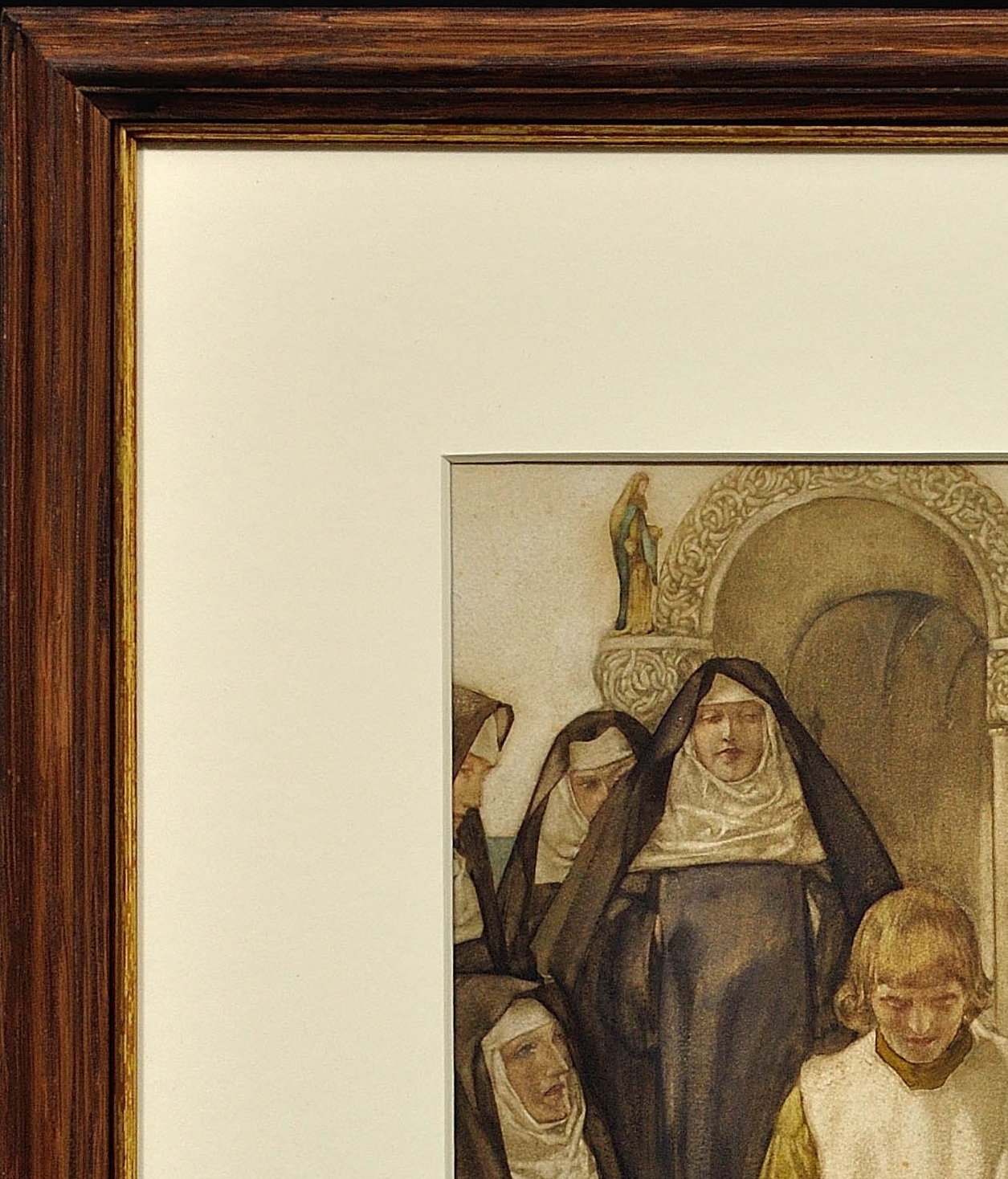 Sir Lancelot and the Young Squire, 1911

Available for sale from Big Sky Fine Art; this original painting by Sir William Russell Flint dated 1911.
The watercolour is presented and supplied in a sympathetic and contrasting contemporary frame to suit the subject colouration (which is shown in these photographs) and behind non-reflective Tru Vue UltraVue® UV70 glass.
This antique piece is in very good condition. It wants for nothing and is supplied ready to hang and display.
The watercolour is signed and dated lower right.

Sir William Russell Flint is widely acknowledged as the greatest British watercolour artist of the twentieth century. He had a lifetime spanning almost ninety years during which he enjoyed unprecedented success as an artist, excelling in a variety of media. However, it is as a watercolorist of landscapes, historical subjects and semi-nudes in Spanish settings that he is best remembered.

He has enjoyed almost constant popularity since the 1920s. In recent years, his prints have commanded high prices in auction and his originals are genuinely competed for by top dealers and private collectors. He was given the ultimate accolade by his peers when he had the honour of a one-man exhibition at the Royal Academy in 1962 – the highest distinction an artist can achieve during his lifetime.

William Russell Flint was born in Edinburgh on the 4th April 1880. His father was a commercial artist and so young William was brought up in a creative environment. He studied at Daniel Stewart’s College, Edinburgh until the age of 14 when he became apprenticed to a firm of lithographers. From 1895 he began studying at the Royal Institute School of Art evening classes. This led him to work on line and colour, which progressed later into his own unmistakable watercolour style. He found inspiration when he visited the continent with his brother, and painted watercolours in Dordrecht, Amsterdam and Volendam.

In 1900 he moved to London where he was at first employed to undertake medical drawings, and later joined the staff of the Illustrated London News, 1903-7. This was in the days before photography, and drawings and engravings were the only source of illustration for books and magazines. The Illustrated London News was read across the world, and the name of William Russell Flint accordingly, providing the basis for the international recognition that he was later to receive as a watercolour artist. During this period, he studied at Heatherley’s Art School in the evenings and also furthered his art education by studying independently at the British Museum. His initial ambition was to be a book illustrator and he undertook various commissions, producing illustrations for great classic editions, including Homer’s Odyssey, Thomas a Kempis’ The Song of Solomon, H Rider Haggard's King Solomon's Mines, W. S. Gilbert's Savoy Operas and Chaucer's Canterbury Tales.

In 1905 Russell Flint married an admiral's daughter, Sibylle Sueter. They had a long and happy marriage, until his Sibylle died in 1960.

Russell Flint had illustrated watercolours at the Royal Academy from 1906 and soon achieved recognition for these and his oil paintings. He visited Italy in 1912-13 and around this time also took up etching, which he studied at Hammersmith School of Art in 1914, having already won a silver medal at the Paris Salon in 1913. After exhibiting only 3 oils at the RA he was elected an Associate member. He was elected a full member in 1933.

During the Great War, Russell Flint served as a Lieutenant in the Royal Navy Air Service, working on the development of rigid airships. He transferred to the RAF as a Captain and served from 1918 to 1919 as Admiralty Assistant Overseer Airships. Some years later he painted a watercolour titled ' Hilda's Bonnet' on a small piece of material from HM Airship 24 which had been in his charge.

After the war, Russell Flint returned to his first love – painting, and in doing so travelled all over Europe with his wife, especially in France, Italy, Scotland, Spain and Switzerland, producing and exhibiting many fine works. In his autobiography he wrote “On getting out of uniform in February 1919 I found that so many people wanted my watercolours that I ceased to be an illustrator and became a painter. From 1919 to the present day, I have lived by my brush, still in pursuit of my own indefinable ideal.”

Throughout the early 1940s, William and Sybil Russell Flint went to live in Devon on a poultry farm. Having served in the RAF, he was allowed to visit Devonport Dockyard, (of which a limited edition has been published, described as a masterpiece of perspective) and to paint, whenever he wished.

After the end of the Second World War, William Russell Flint and his wife Sybil returned from Devon to their home at Peel Cottage, Camden Hill, London. This proved a tremendous success for Russell Flint as the nation was beginning to recover from the years of war, and beginning to enjoy the arts once more. His talent with both the watercolour medium and his skill in depicting the female form created a hallmark style which would later become legendary. In 1947 William Russell Flint was knighted by King George VI for his services to art.

In his later years, due to his artistic and financial success, Russell Flint was able to travel extensively across Europe, and this era produced some of his finest landscape work.

Although a limited edition of his work works was published in 1924, it was not until Russell Flint was in his seventies that publications of his works really gathered momentum. Between 1951 and his death in 1969 a further 70 titles were released as demand and interest in his work increased. In all 106 signed limited editions were published by five different publishers from 1924 to 1970.

Russell Flint remained active as an artist until his death from leukemia in London on 30 December 1969, aged 89. The Times obituary paid tribute to his remarkable technical skill. He left behind one of the finest and most sought after collections of watercolours in the world. As well as his original work, many of his paintings have been reproduced as limited edition prints.

The artist Adrian Bury wrote of Flint; “I have always regarded Sir William Russell Flint as a great artist and a great man (the two are not always synonymous), in the sense that he planned life so as to make the most of his many talents, to add more beauty to the world, and give happiness to his dependents, friends, and humanity at large”.

Despite his considerable success, Sir William Russell Flint remained a modest man, who always remained genuinely grateful for the talent he had been born with. He once said "I have always painted for fun. If it ceased to be fun I would stop painting".

This original watercolour painting by Sir William Russell Flint was produced by him specifically for the 1910-1911 book of King Arthur and his Noble Knights of the Round Table “Le Morte Darthur” (as it was originally and ungrammatically spelled in Middle French, before becoming known as Le Morte d’Arthur). Flint produced all the illustrations of the book. A hardback copy of the second volume of the 1920 edition by the publisher Philip Lee Warner for the Medici Society Ltd, (which is complete but with the spine cover unattached) is held by Big Sky Fine Art and will be provided to the purchaser of this painting. This volume contains colour images of 18 illustrations produced by Flint, with the painting offered here reproduced as the frontispiece. The quote underneath this image in the book is “Sir Launcelot beheld the young squire and saw him seemly and demure with all manner of good features, that he weened of his age never to have seen so fair a man of form”.

The painting depicts a blond-haired young squire wearing a gold shirt with white tunic over and golden coloured belt. He is kneeling with his head lowered in reverence with his hands clasped together in front on him. He is praying or earnestly addressing those assembled. To his left is seated an older man, Sir Lancelot, wearing a black tunic over a blue shirt. He has dark cropped hair and appears to be observing the young squire intently. He is seated in a substantial wooden chair which is carved with decorations. On the wall behind is a decorative cloth, perhaps a tapestry, with a repeat pattern of kneeling angels holding a crucifix. There is also a tall stone doorway or archway, intricately carved and leading to another area. This is obviously a religious building of some prominence, perhaps an abbey. To the squire’s right there are four nuns, each dressed in traditional black habit with white wimple and black veils. All their attention is on the young squire, who appears to be making a good impression, for the expression on the faces of the nuns is solemn, yet not displeased.

This scene is a very elegant one; the colours are rich, and the lines are fluid. There is a real sense of history about this – and indeed the work itself, now over a hundred years old, is a valuable piece of cultural history. This is a serious piece of art from an absolute master artist.


Le Morte d’Arthur (“the death of Arthur”) is a fifteenth-century Middle English prose reworking by Thomas Malory of tales about the legendary King Arthur, Guinevere, Lancelot and the Knights of the Round Table, along with their respective folklore. In order to tell a “complete” story of Arthur from birth to his death, Malory compiled, rearranged, interpreted and modified material from various French and English sources. Today, this is one of the best-known works of Arthurian literature. Since the nineteenth century revival of the legend many other authors have used Malory as their principal source.