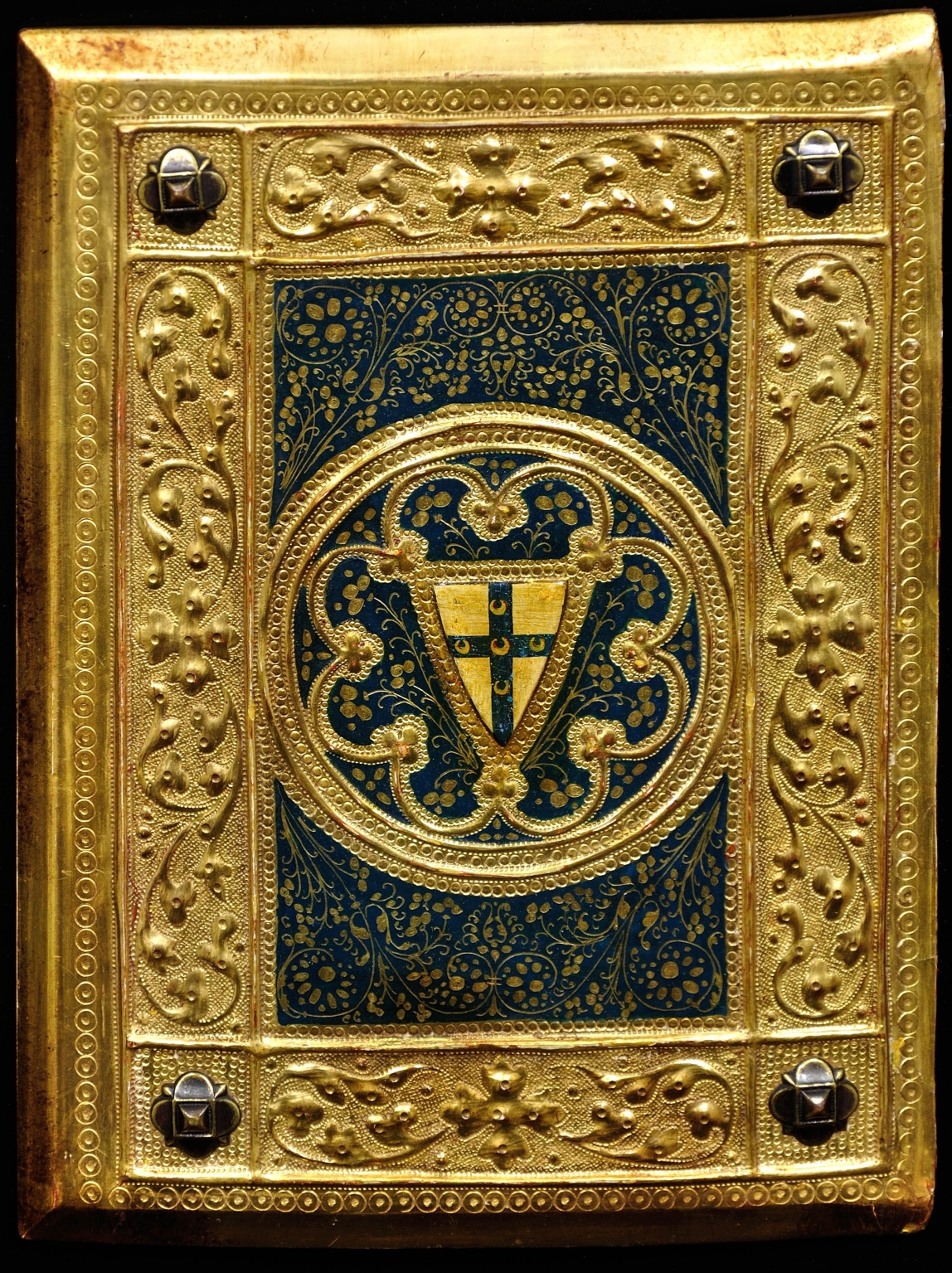 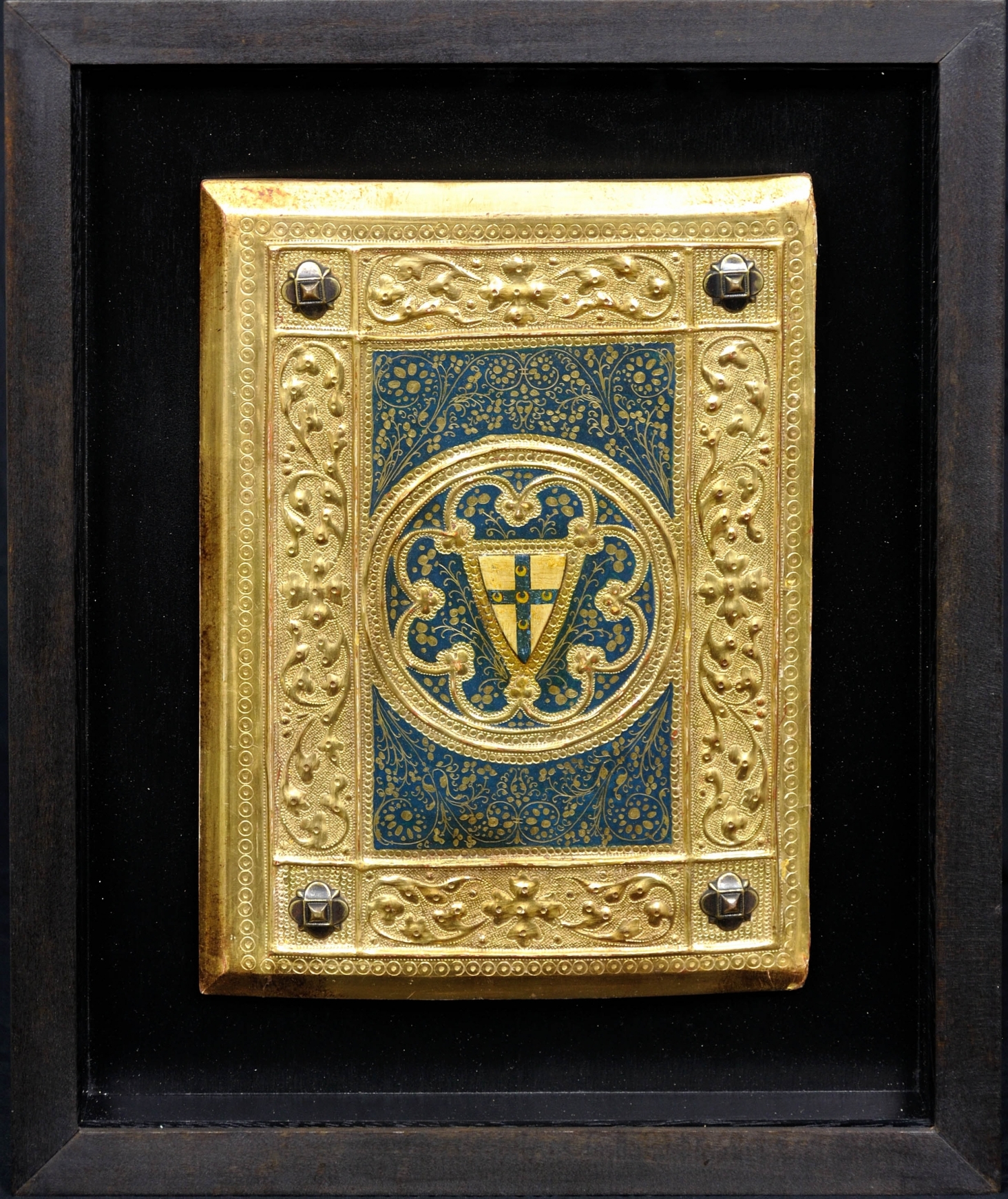 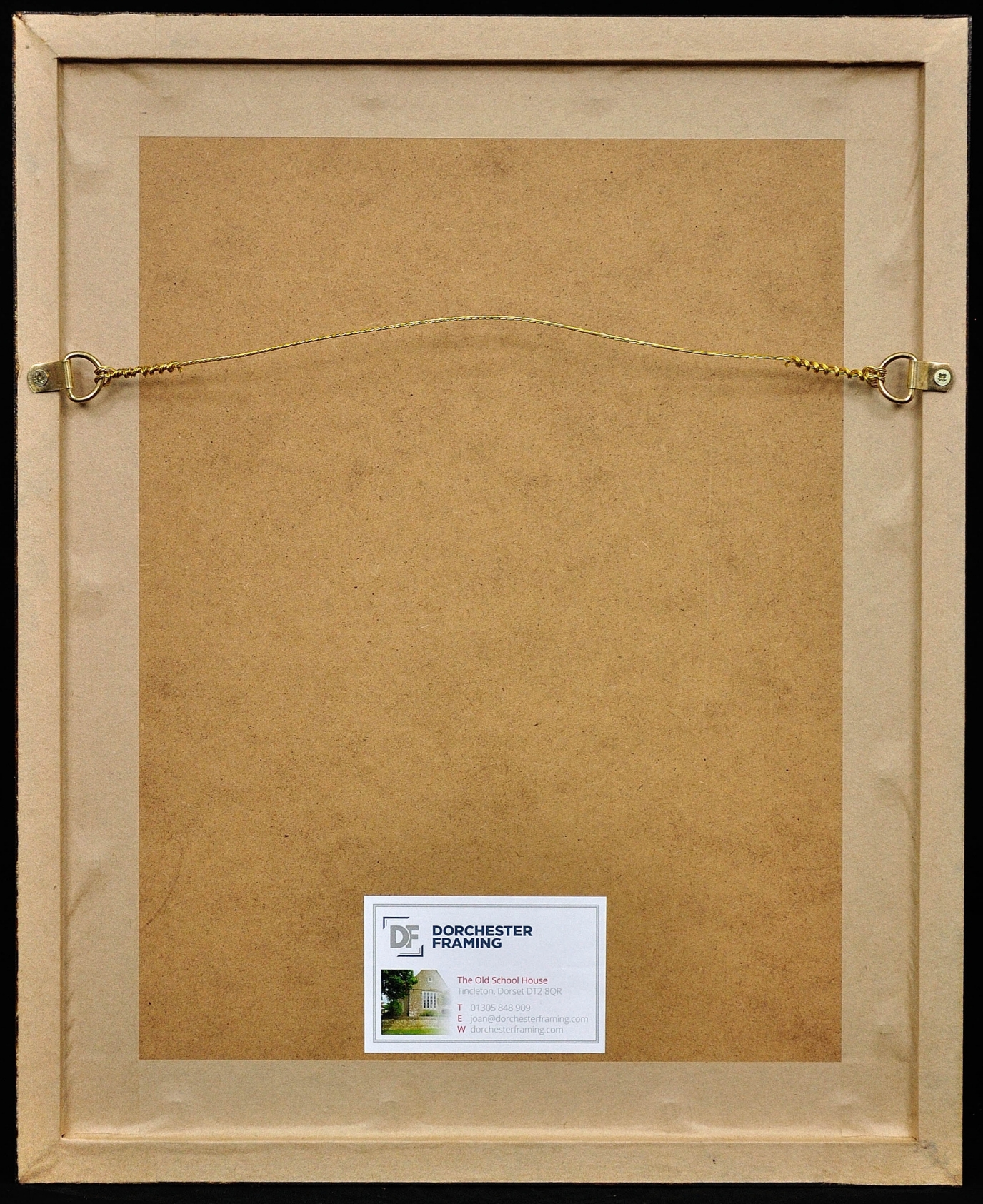 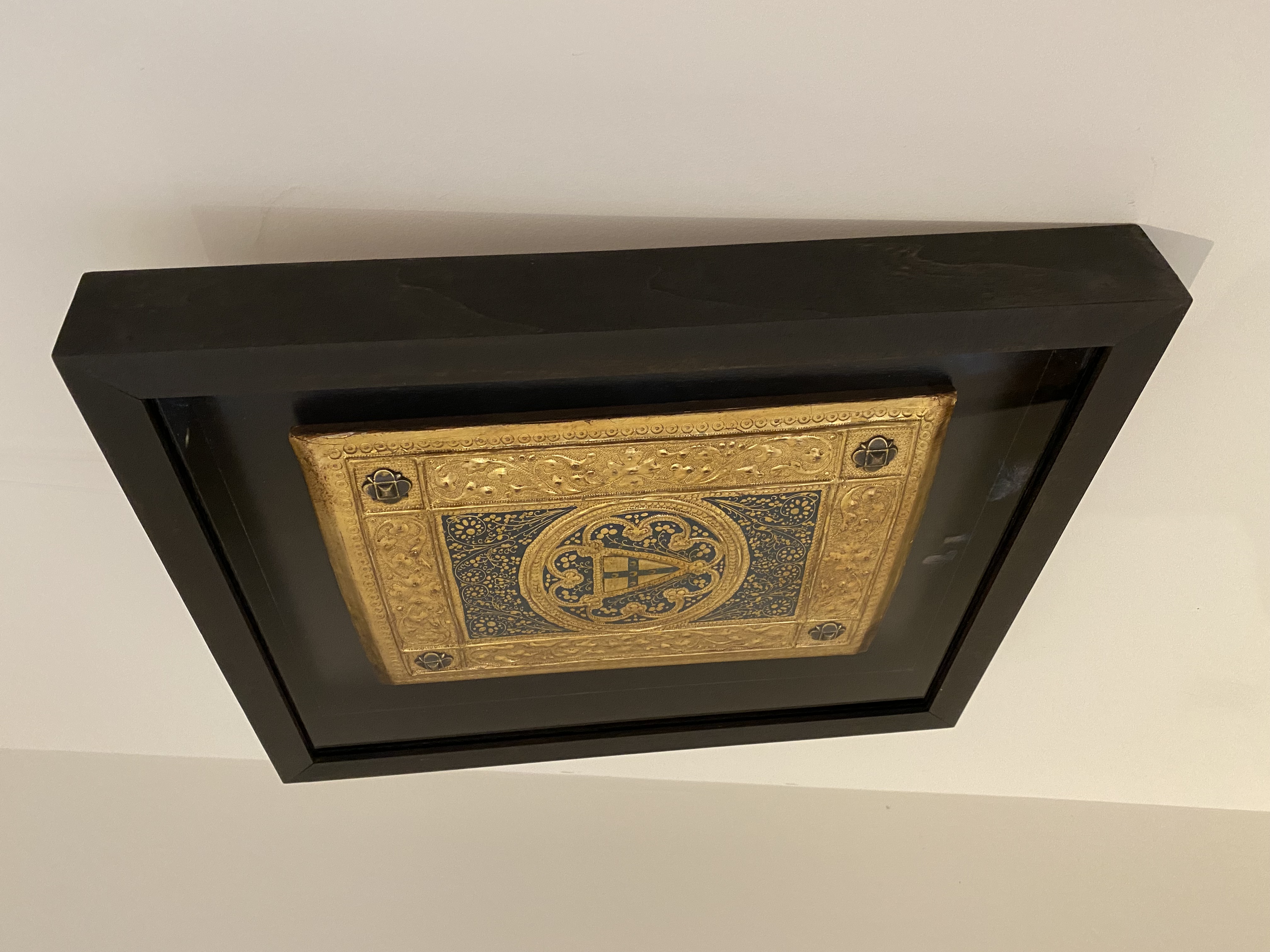 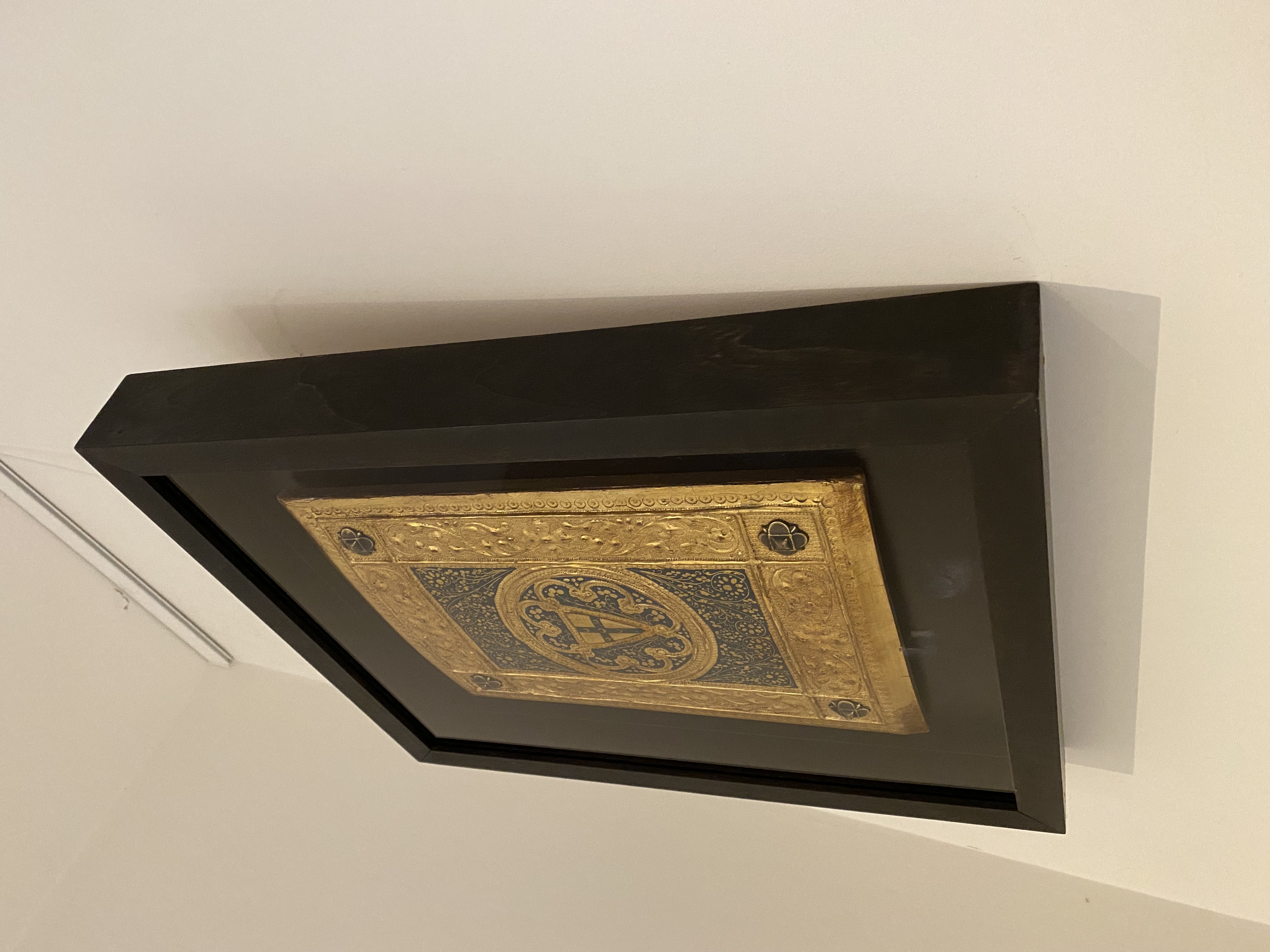 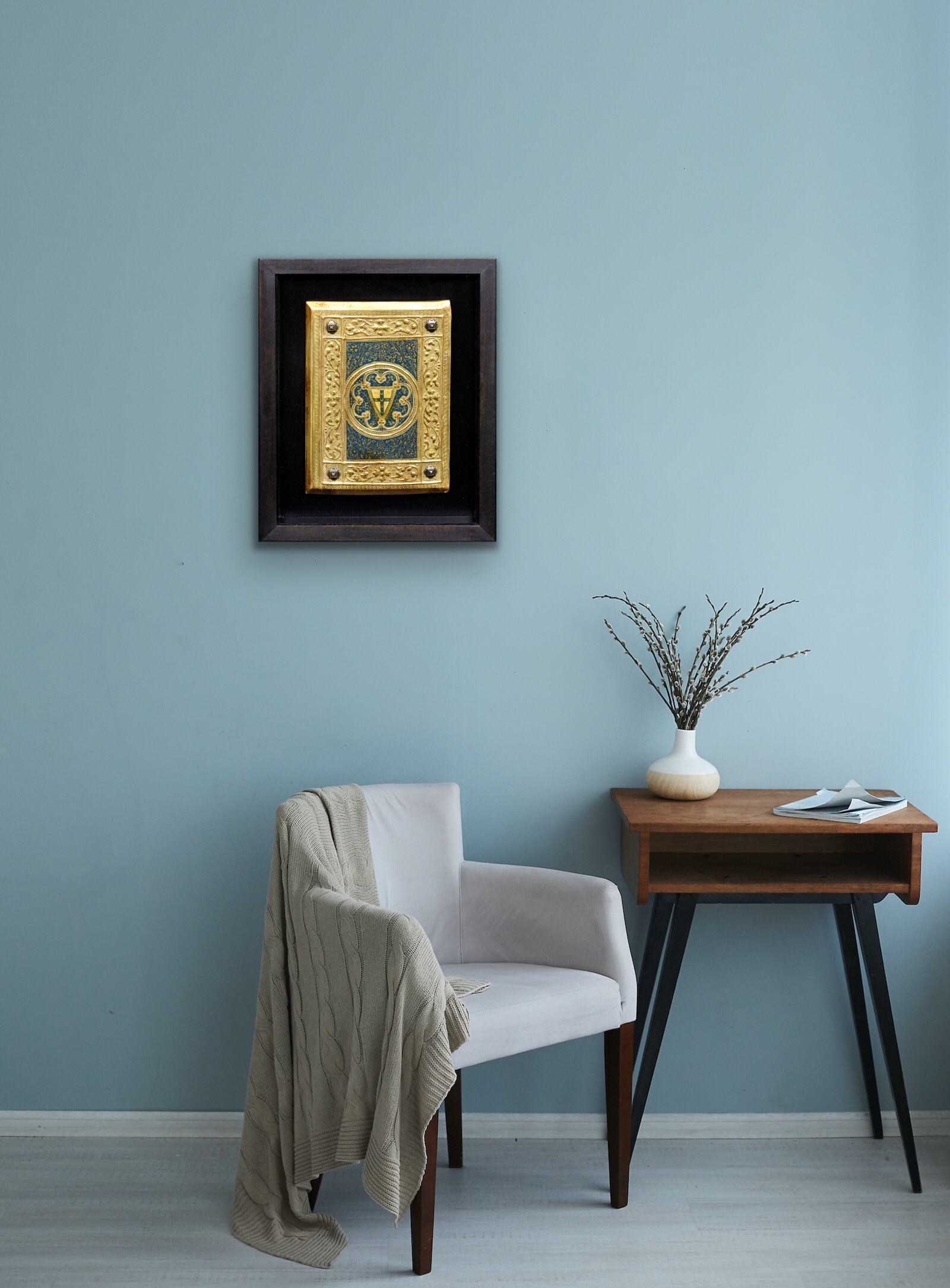 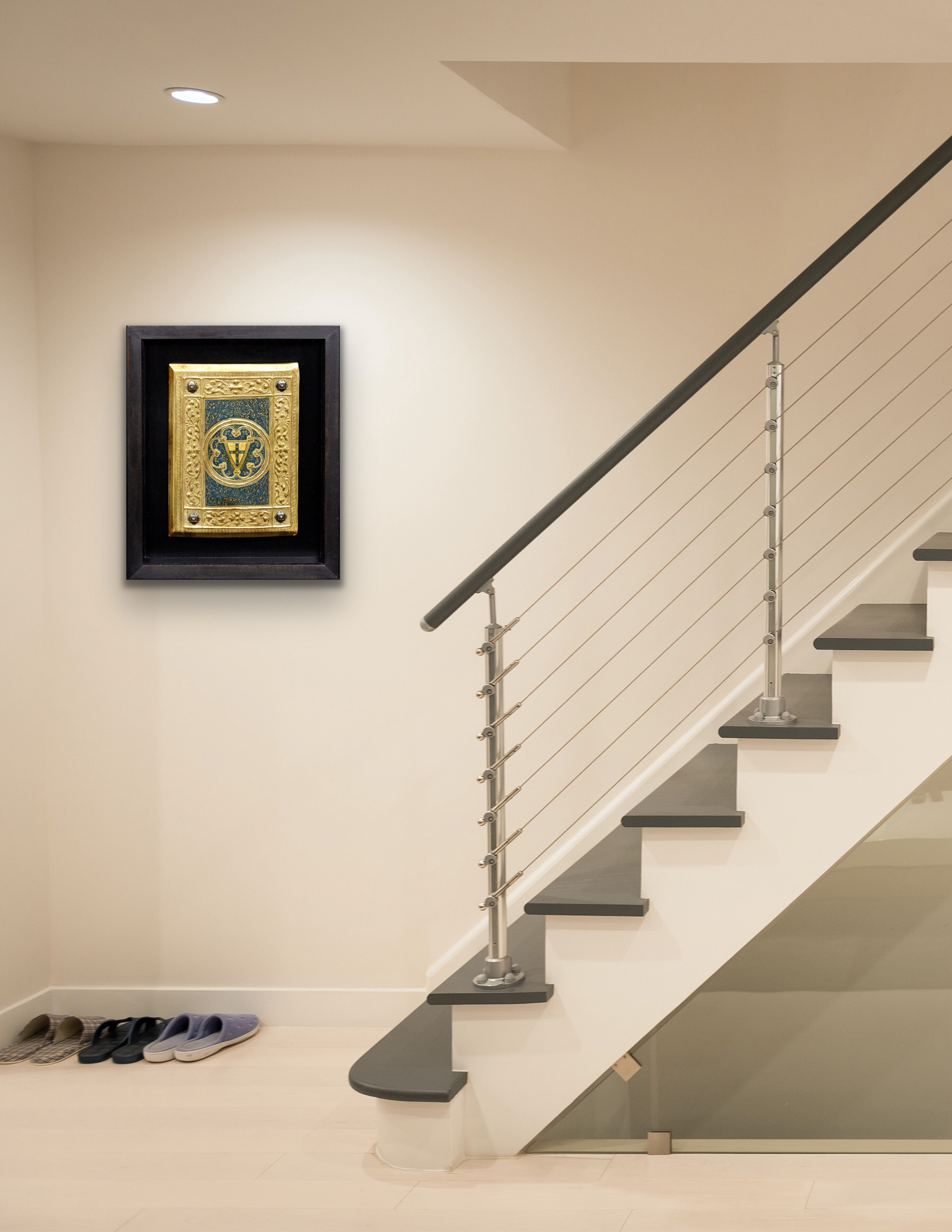 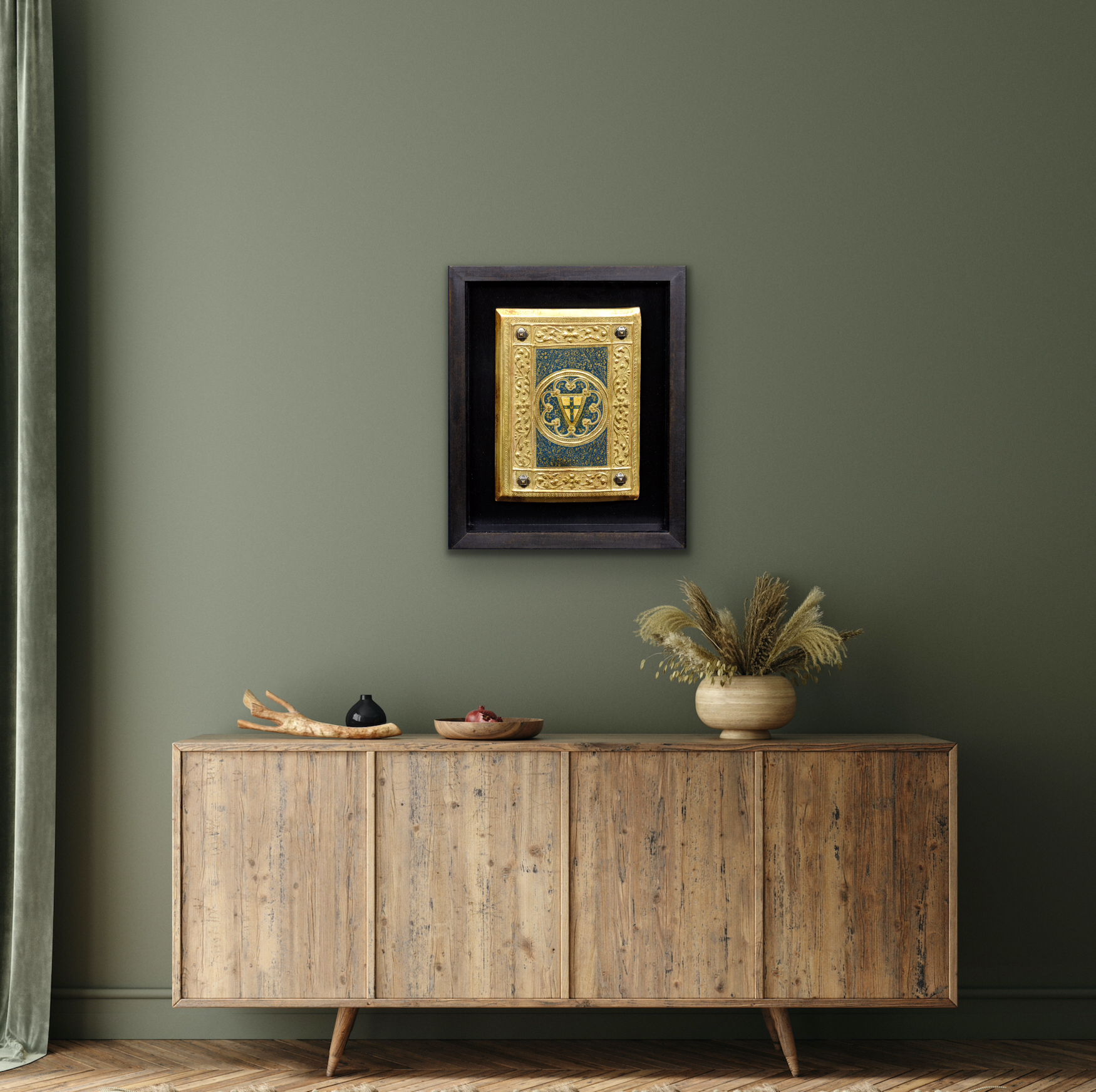 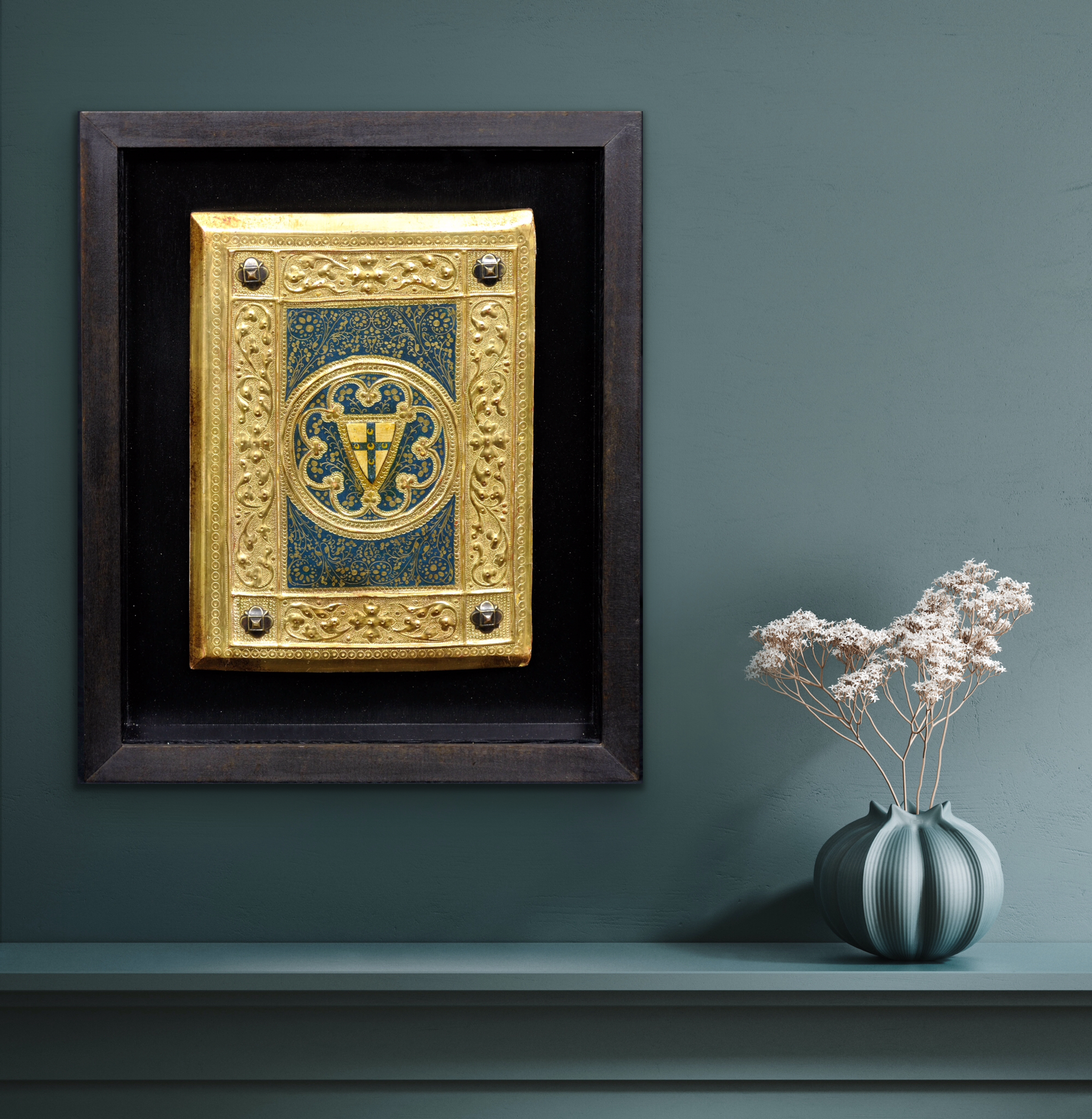 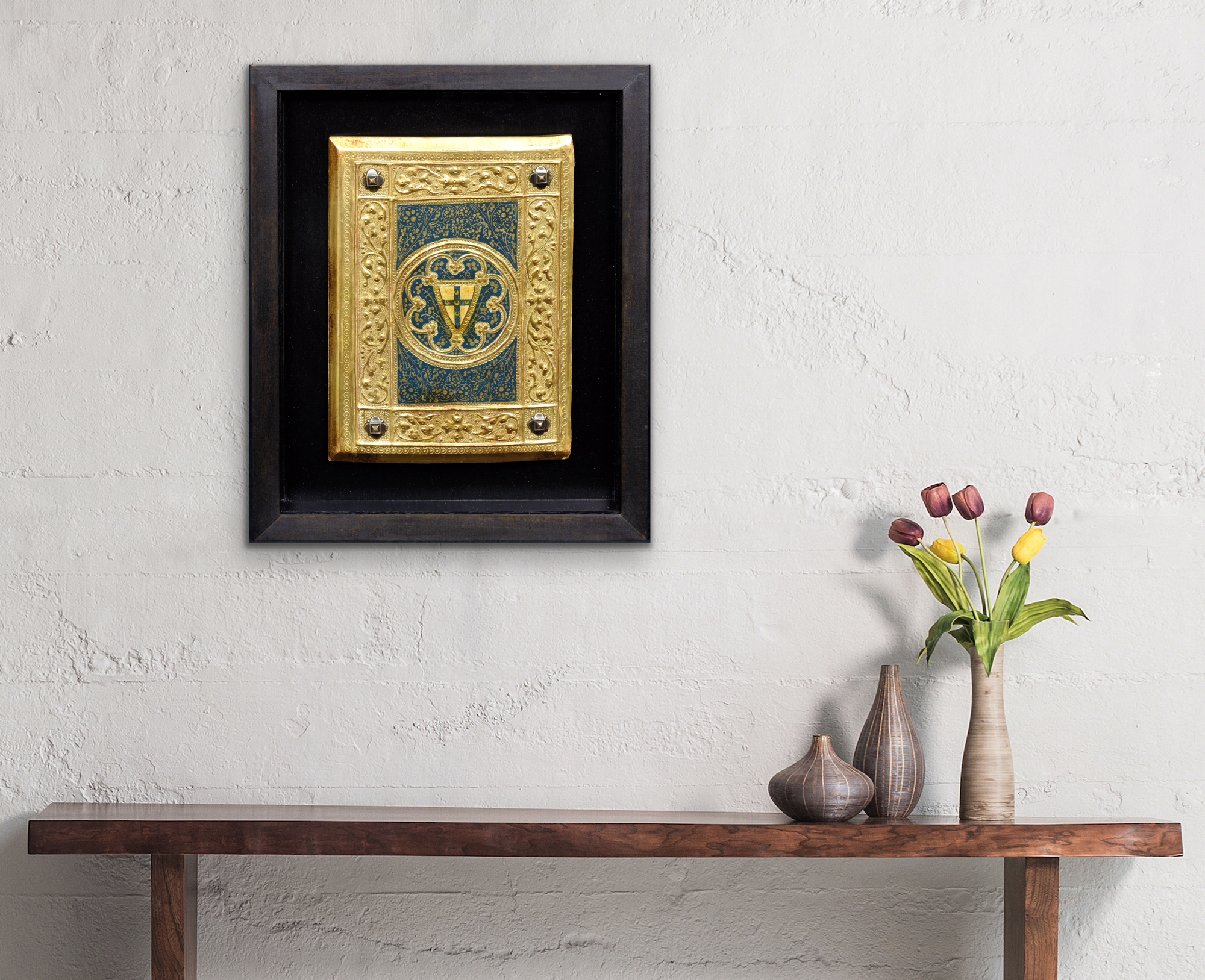 Available for sale from Big Sky Fine Art; this painted, gesso and gilt “tavolette” book cover in the Biccherna style by Icilio Federico Joni is mounted and supplied in a contemporary black Tulip Wood frame (which is shown in these photographs) which is glazed with non-reflective Tru Vue UltraVue® UV70 glass. The wooden book cover is curved and float mounted giving a wonderful 3D depth to its presentation.
The gesso and painted surfaces have benefitted from professional restoration which took place in early 2021 on our instructions.
This antique book cover is now in very good condition, commensurate with its age. The frame presentation is new and in excellent condition. Combined, it wants for nothing and is supplied ready to hang and display.

The story of these panels and of their artist is fascinating, and begins in 13th century Siena:

The Biccherna was the person who held the position of Magistrate of Chancellery of Finance from the 13th to the 14th century for the republic and the city of Siena, in the Tuscany region of Italy. The records of that office were very important because Siena was one of the earliest and most significant banking centres in Italy, and indeed in Europe. It became the fashion to keep banking and taxation records of the region in large books with painted leather covers. These were originally made from wood and leather. In the competition to make these ever more prestigious the bindings and panels on the front and rear of the books were painted by the major artists of the day, such as Giovanni di Paolo. Many of these mainly secular covers are displayed in the Archives of the State of Siena located in the Palazzo Piccolmini.

The Gothic Revival of the 19th century occurred partly as a reaction against the progress of industrialisation in Europe generally. It was however greatly affected by the unification of Italy in the second half of the 19th century. This led to the closure and downsizing of many religious institutions, which resulted in the dispersal of thousands of works of art dating from the Middle Ages and early Renaissance. Many aristocratic and bourgeois families struggled to pay debts or simply to make ends meet and so they sold off their private collections and family heirlooms. There was then an influx of goods into the antiques market which provided a great deal of work for Italy’s restorers and craftsmen, since many of these pieces were in need of cleaning, repair and, in keeping with the interventionist tastes of the times, radical restoration, before they could be sold on, often to foreign buyers. These early Italian works became so fashionable that demand soon outstripped supply. This in turn gave rise to a new type of artist-craftsman capable of turning out from scratch increasingly convincing reproductions, imitations and out-and-out fakes.

Siena naturally became the epicentre of this thriving cottage industry because of the extraordinary continuity there in traditional craft skills. This technical expertise had been handed down from generation to generation, and it was perhaps inevitable that a number of artists with real talent, the flair of commerce and a genuine love and understanding of antique Sienese art should adapt their skills to these new market conditions. Among these artists were Igino Gottardi, Alceo Dossena, Fulvio Corsini, Umberto Giunti, Bruno Marzi and Icilio Federico Joni. Their works ended up in virtually every major art gallery, museum and private collection in the world. Joni was the most celebrated of these artists and came to be called the “Prince of Sienese Forgers”.

These artists did not usually operate in a clandestine manner, as least as far as most of their supply to the art dealers of Florence, Venice and Rome were concerned. It is interesting to note that they operated close to the premises from which export licenses were granted, and they could only obtain an export licence by proving that the work they produced was a reproduction or fake of a much earlier period. Initial supply was therefore often on the basis that their works were modern imitations of old masters. The dealers however were often unscrupulous and in turn often sold these to their clients as the genuine article.

In 2004 Sienese professor of art history Gianna Mazzoni curated an immaculately researched and visually sumptuous exhibition entitled “Falsi d’autore” (Fakes by Master Artists). This told the story of these great art fakers and argued that it was time for their works to take their place in the general history of 19th and 20th century Italian art.

Joni was the most famous of the Sienese painters and restorers who produced imitations of the wooden panel bindings, the Tavolette di Biccherna. He was born in 1866 and lived all his life in the region of Sienna. He was a classically trained artist and worked in Siena’s art restoration business in various capacities. He restored works, fabricated works and even flat-out faked works by famous masters of Italian Medieval and Renaissance art.

One on the many areas in which Joni excelled was the creation of the Tavolette di Biccherna. By around he 1890 he was a skilled produced of imitation “Gothic” altarpieces and he received a commission to create a book cover in imitation of those found on a Tavole di Biccherna. Although he had never visited the city archives to inspect the originals, he soon established a lucrative business of faking these covers. Ironically, his bindings are in fact anachronistic as from 1459 the wooden panels began to be bound with leather, yet Joni gave his wooden panel bindings dates post-1459. His undetected imitation bindings have graced some of the greatest book collections, including those of Hoe and Wilmerding. Joni later boasted of incidents in which local police were alerted to books purportedly stolen from Siena Cathedral or the state archives, only to discover they were by Joni. Even recognised as imitations, they had great cachet, as the commission by Lady Wantage for a binding in 1904 demonstrates.

Joni and his fellow “fakers” were sometimes quite legitimately called upon to apply their skills to make faithful copies of genuine works, for instance, when an owner wished to sell an original but keep a less valuable version. The existence of such copies inevitably led to a considerable degree of confusion, with some copies coming to be regarded as originals and vice versa. Some of Joni’s works were so admired – whether with or without the knowledge that they were fakes is unclear – that they were assiduously copied by other artists, creating a subgenre of fakes of fakes. Overall, only a relatively small part of Joni’s production consisted of direct copies, his “original” fakes being harder to detect. Indeed, he took some pride in the idea that he was making something new, and wrote that an artist “who creates a work of art of his own, in imitation of the style of an old master, is not a forger; he is at worst an imitator, and he is creating something of his own”.

Joni wrote his autobiography (Memories of a Painter of Antique Pictures) despite being offered a substantial sum to desist by a large consortium of Italian art dealers, who did not want him to reveal the ‘goings-on” of the trade in antiquities. Joni’s autobiography has been described as a small masterpiece in ambiguity, of things said, not said and implied. It was first published in 1932, and an English version was published in 1936. In it he openly described his forgery work.

Joni had an adventurous and interesting life. He was a flamboyant character, knew many important people and was friends with leading historians of his day, such as Bernard Berenson. He was an undeniably talented painter, gilder and restorer and possessed extraordinary mimetic qualities. He also had several mistresses, produced pageants, played the mandolin and used his studio, where he kept falcons, as a gymnasium!

Today Joni’s forgeries are highly valued in their own right. At least 14 of Joni’s works are recorded and more are in circulation. Given the undeniable beauty of his tavollette binding works it is not surprising that there is a burgeoning market in the best of these pieces, which are now themselves genuine antiques. The Bridwell Library at the Southern Methodist University in Dallas, Texas, possesses a rare “genuine” Joni, that was produced as a commission for a specific book. There is another in the Beinecke Rare Book & Manuscript Library at Yale University, New Haven, Connecticut.

This artwork we are now offering for sale is a wooden panel, originally forming the binding cover of a book and was produced by the most famous Italian ‘forger’ Icilio Federico Joni. The panel is created in the image of those produced in Siena in the 13th to 17th centuries and known as Tavolette di Biccherna.

This slightly arched wooden cover has central heraldic shield within a circle on a background of intricate floral and scrolling decoration. All around the edges of the central panel are wide gilded panels which are themselves richly decorated and form an arabesque frame. In each corner there is a hemispherical brass boss. This piece is coloured entirely gold and a very dark navy. The whole piece has been professionally restored and is in excellent condition, quite stunning. It is mounted within a modern box frame behind museum quality non-reflective glass in a way which perfectly displays its three-dimensional qualities.

For deliveries to EU countries, we will pay the VAT so you don't have to - prices are inclusive of EU VAT.
With respect to import customs duties for your EU country we will send the consignment using the appropriate Common Customs Tariff number header 9701000000 which provides the benefit of ZERO CUSTOMS DUTIES courtesy of the UK - EU Trade & Co-operation Agreement.