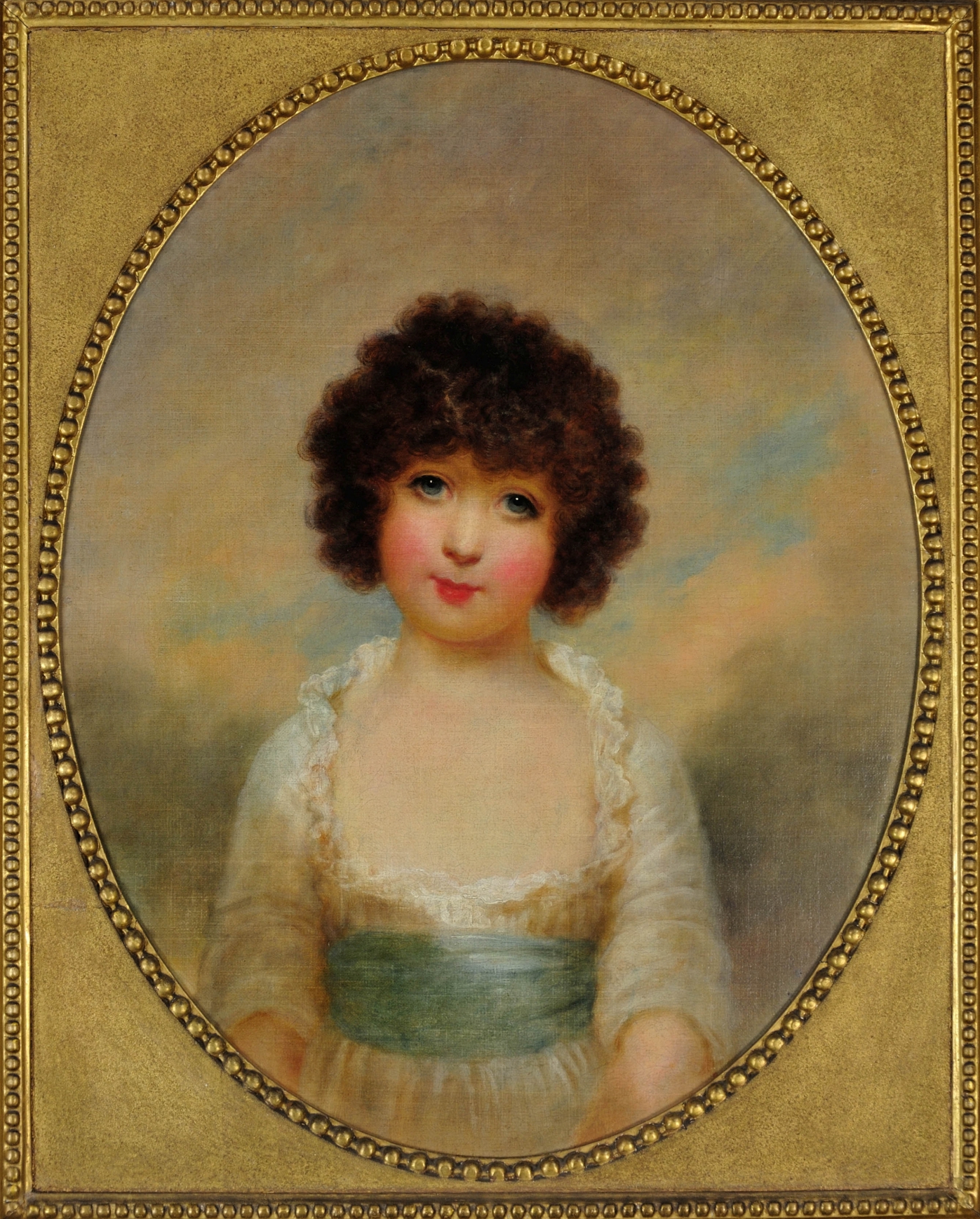 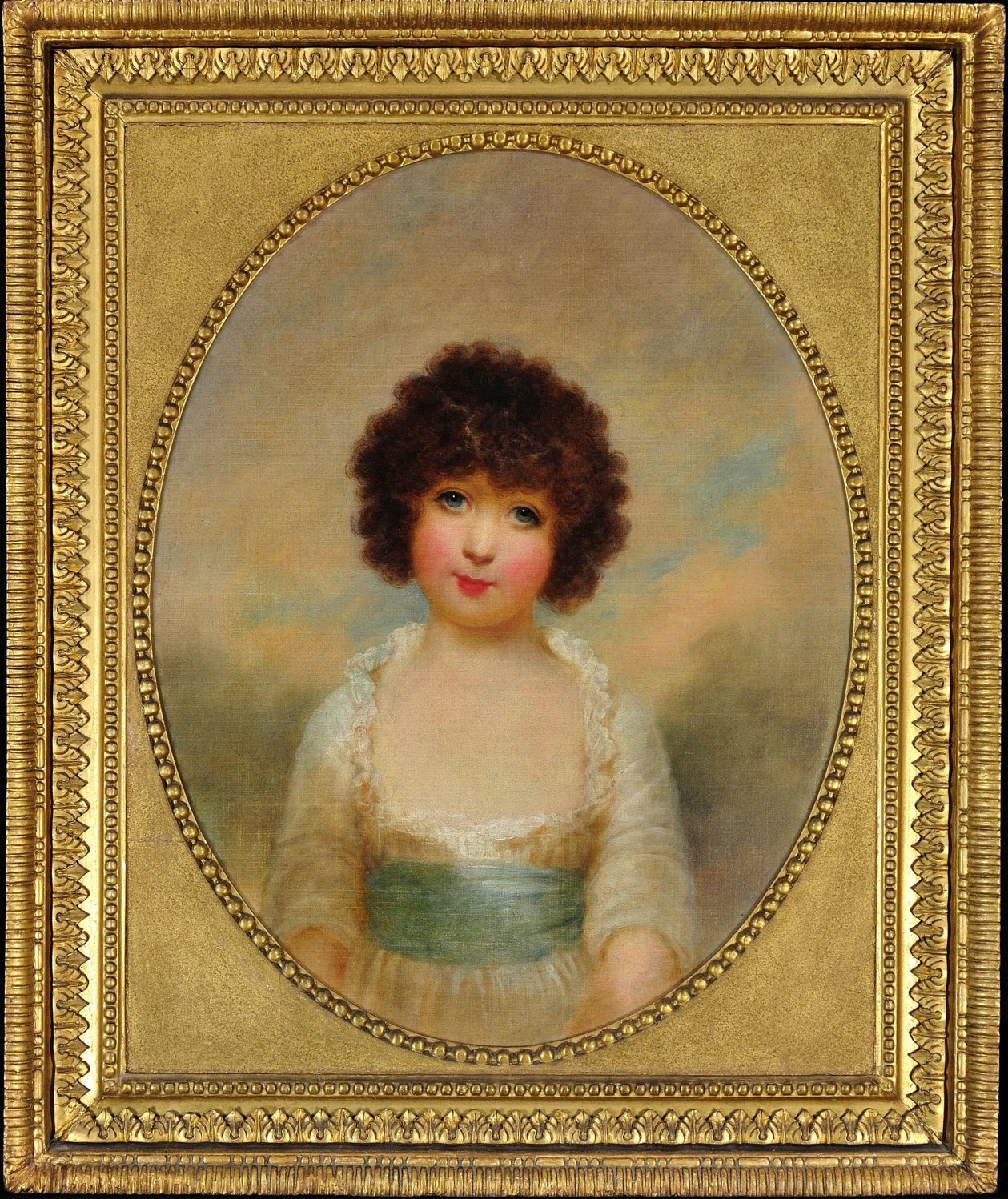 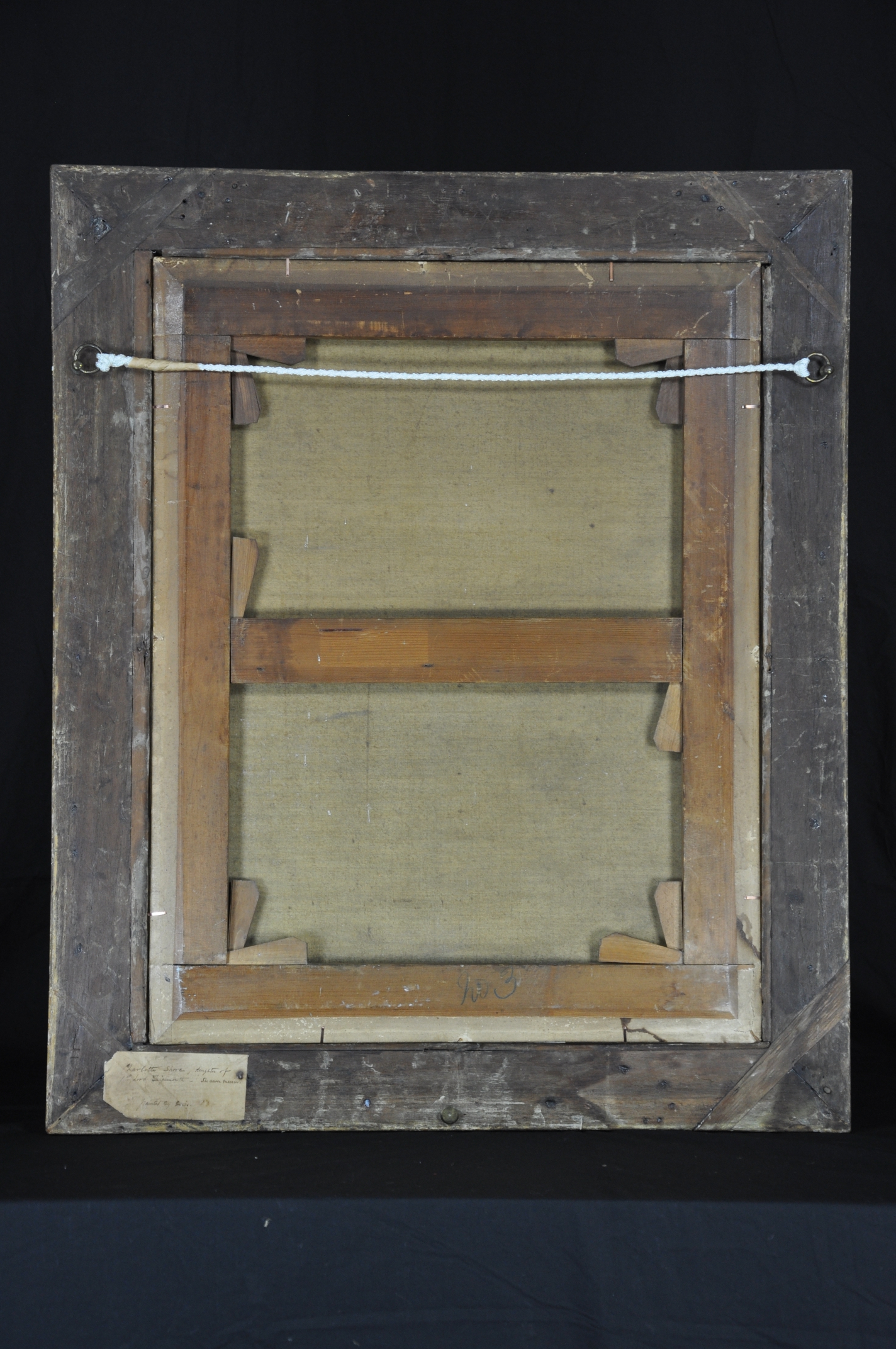 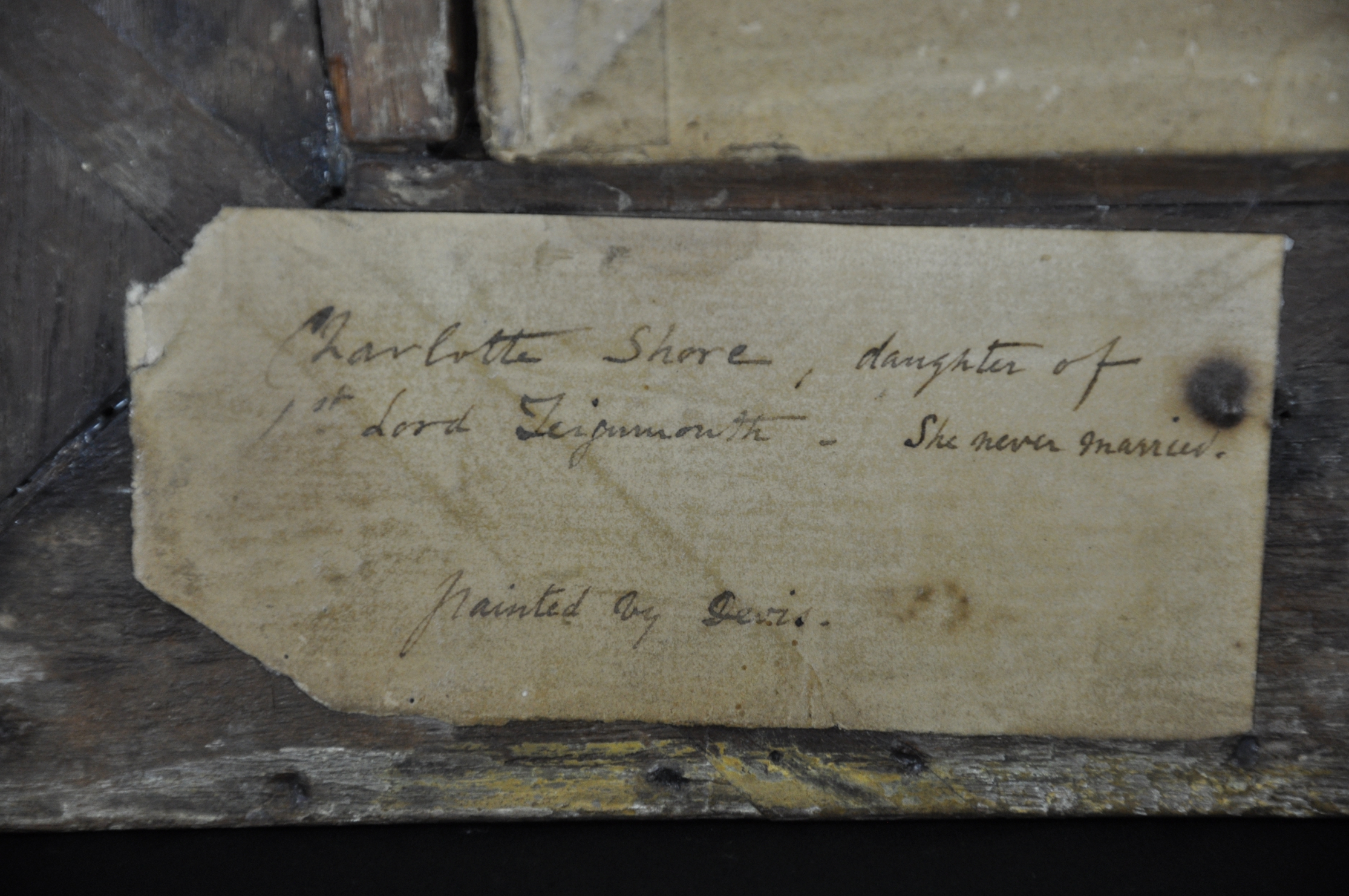 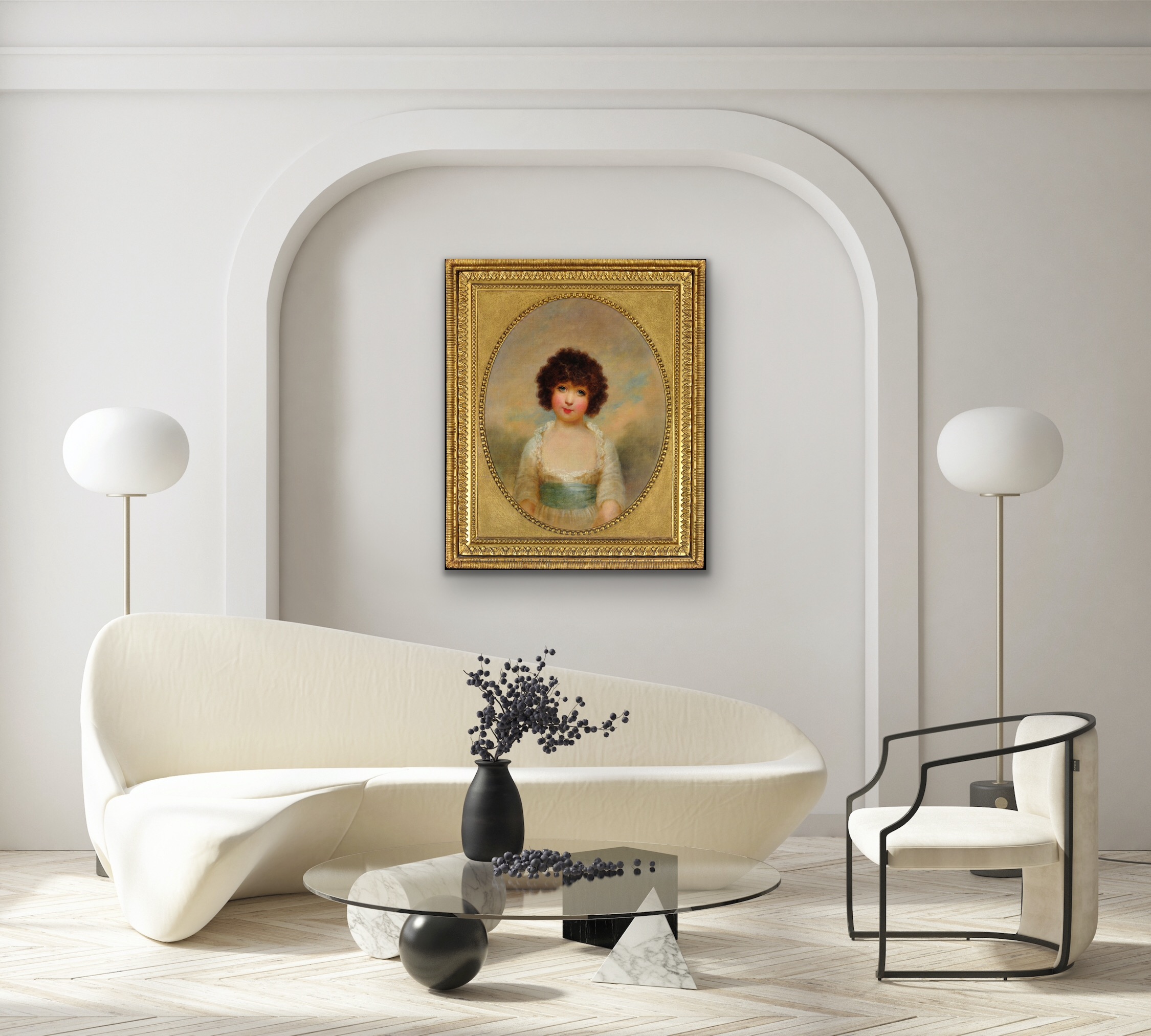 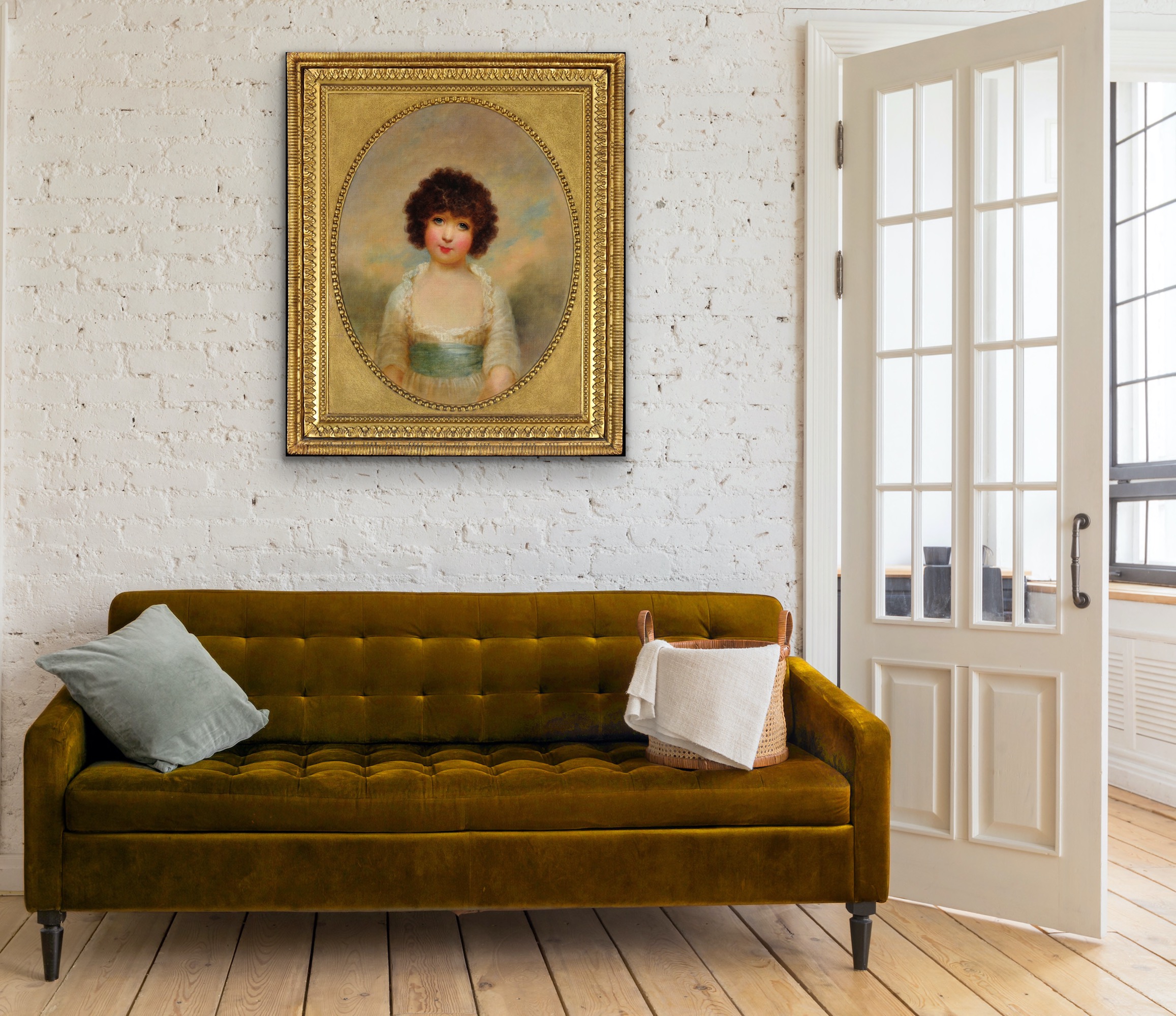 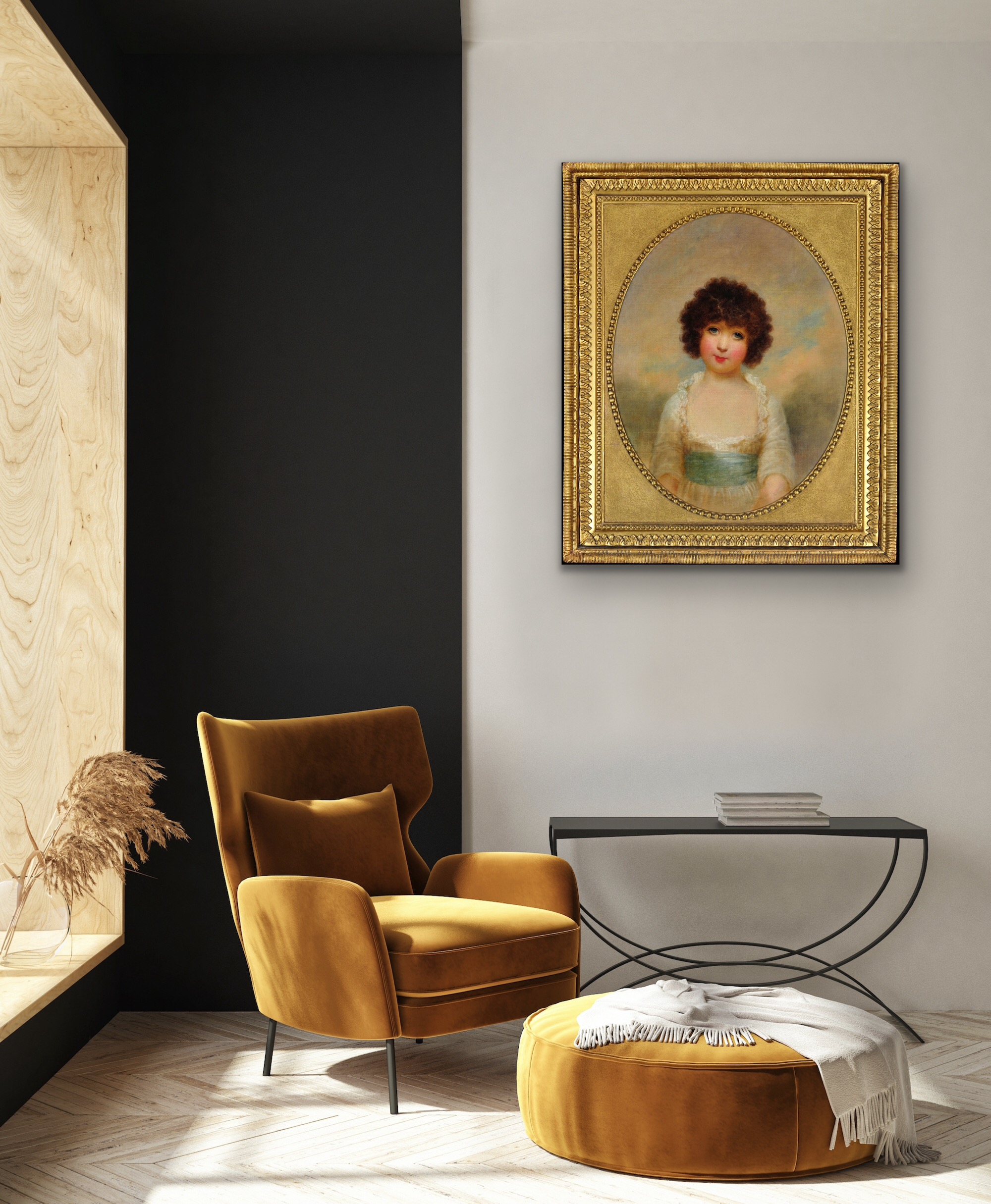 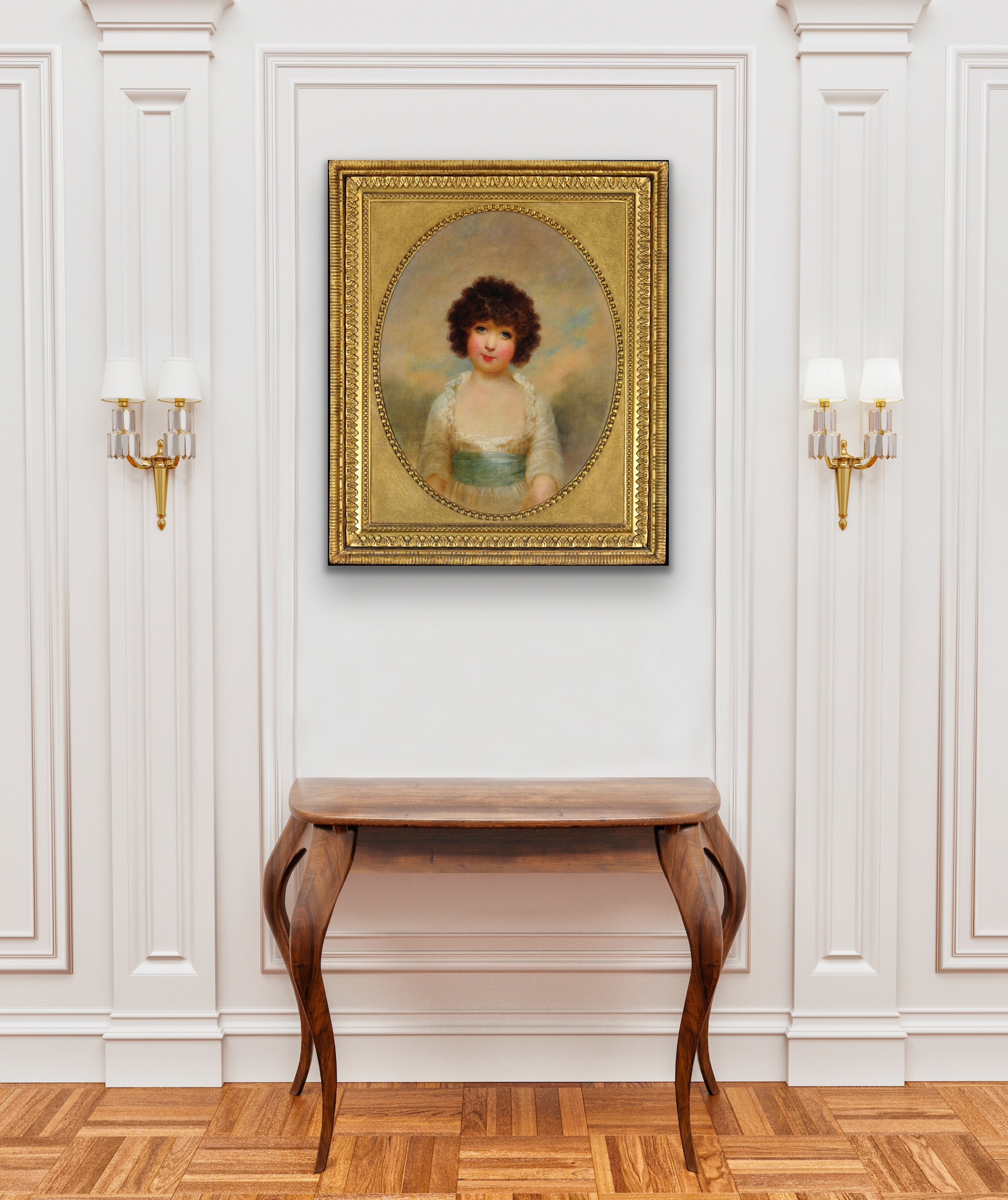 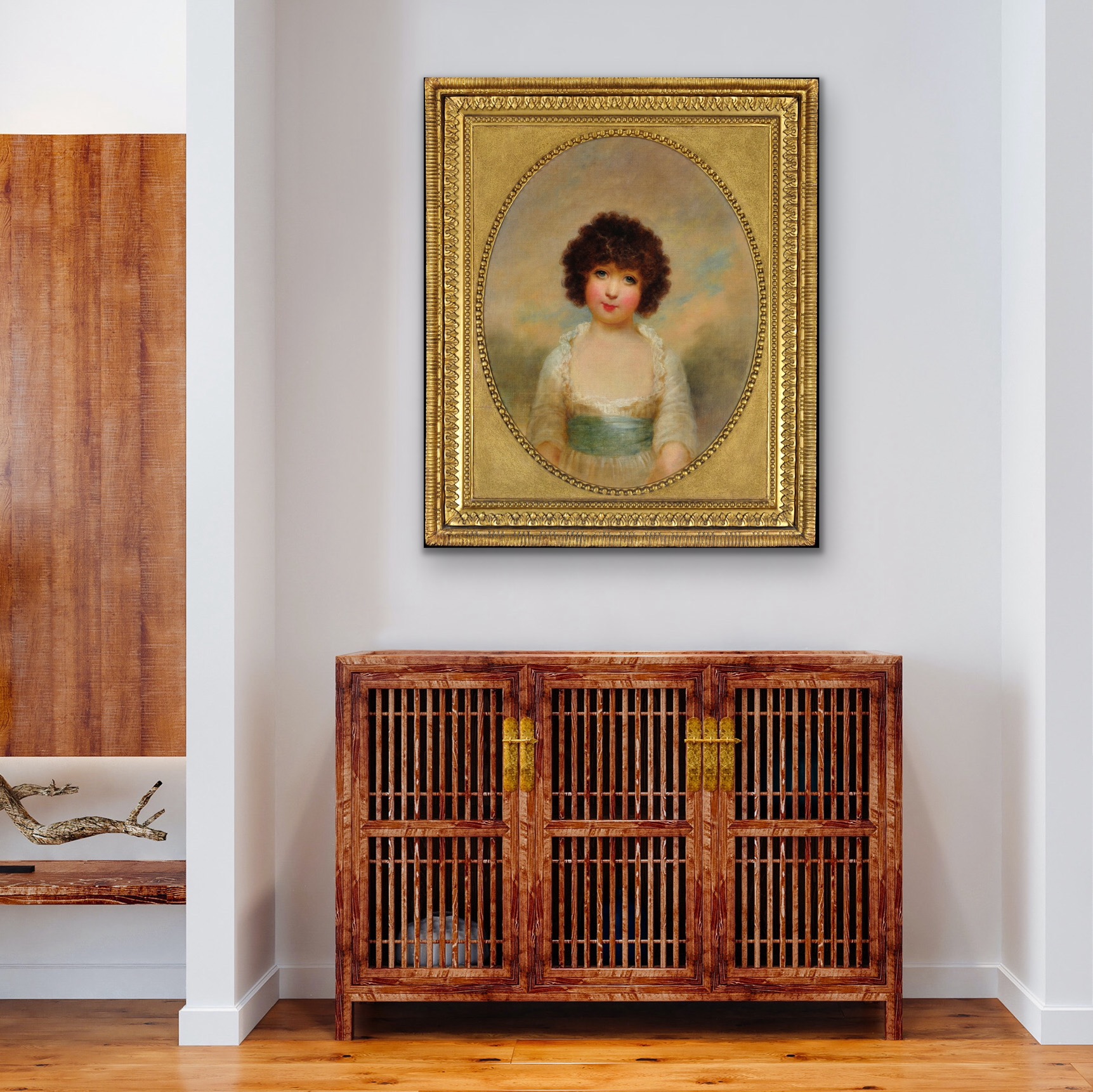 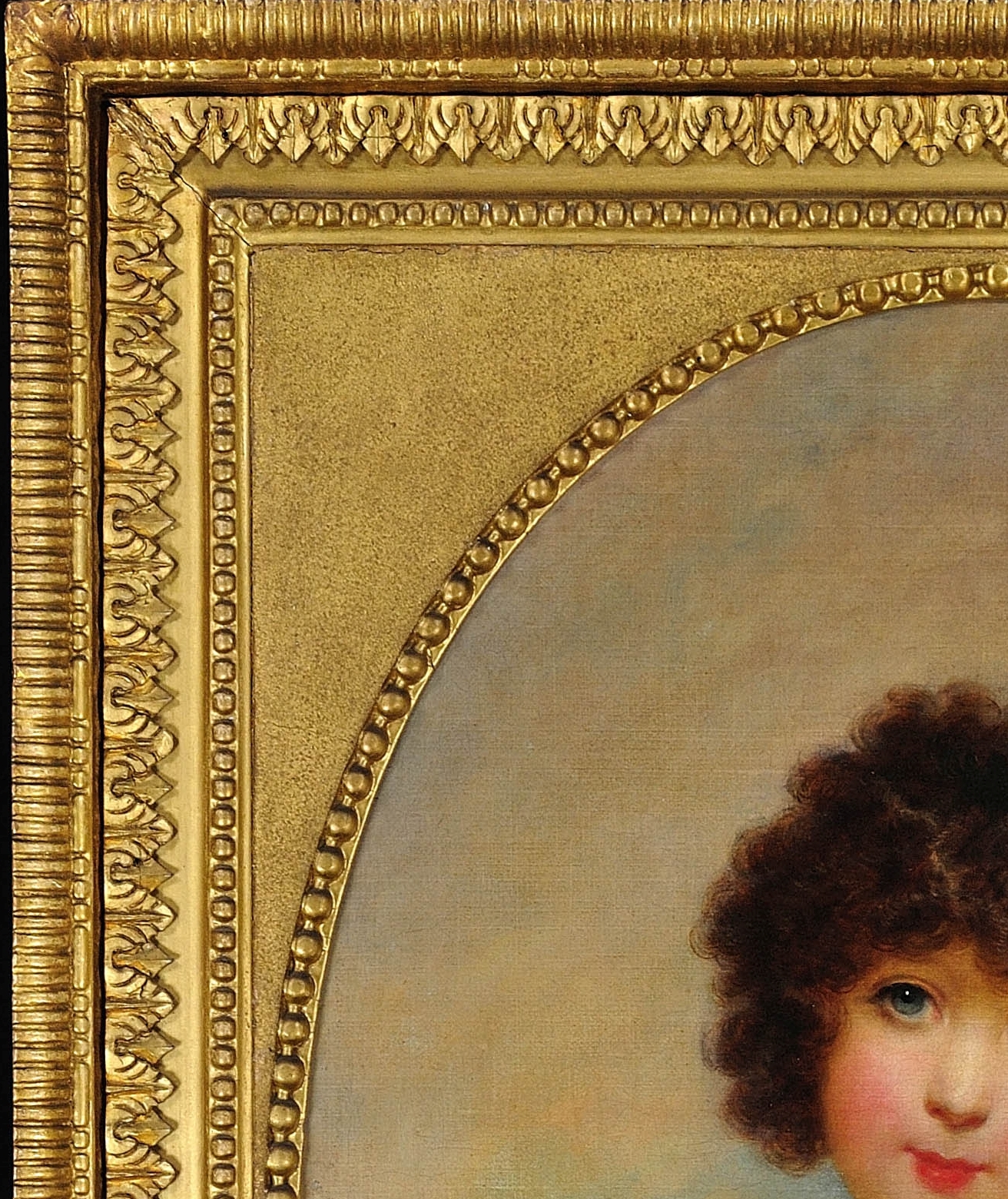 Available for sale from Big Sky Fine Art; this original oil painting by Arthur William Devis dating from around 1820.
The painting is presented and supplied in a 19th century fancy frame (which is shown in these photographs). The painted surfaces and the frame have benefitted from some restoration, cleaning and conservation, which took place in 2017 on our instructions. The canvas is lined.
This antique painting is now in very good condition, commensurate with its age. It wants for nothing and is supplied ready to hang and display.
Provenance: By descent in the family of the sitter. Exhibited: Preston, Harris Museum and Art Gallery, 2000, Arthur William Devis, no.52.

Charlotte was one of the daughters of the first Baron Teignmouth, a title that was created in 1798 for Sir John Shore. The title became extinct in 1981 on the death of the seventh Baron.
John Shore was an anti-slavery campaigner, born in London but brought up in Romford. In 1769 he went to work in Bengal where he was one of the first to learn a number of local languages. In 1790 he returned to England and married but was asked to return to India as Governor and he served in that role until 1798. On his return to England he married and settled in Clapham and took on the job of first president of the British and Foreign Bible Society. He was involved with the Clapham Sect and their anti-slavery campaign. He and his wife had three sons and six daughters.

This adorable original oil on canvas depicts Charlotte, one of the daughters of the first Lord Teignmouth, aged around eight to ten years old. She is an absolute delight, with thick dark brown curly hair framing her beautiful angelic features. She has fair skin, rosy cheeks and rosebud lips. Her dark eyes are wide and engaging. She has the sweetest expression on her face and we feel that she is kind and good natured. She is wearing a simple white gown, typical of the day, with a low neckline and three- quarter length sleeves and a pale blue sash around her waist. She is perhaps an early nineteenth century Shirley Temple!

Arthur William Devis was an English painter of history paintings and portraits. His life and works were colourful and engaging, and he produced some of the definitive images of his generation.

Devis was born in London on 10 August 1763, the nineteenth child of the artist Arthur Devis and his wife Elizabeth Faulkner. There were several artists in the family and Devis showed an early genius for art. He received some artistic training from his father and then studied at the Royal Academy Schools where he received a Silver Medal, and the good opinion of Sir Joshua Reynolds.

He became extremely well -travelled, and even circumnavigated the world; when he was about twenty, he was appointed draughtsman on the British East India Company's ship Antelope in a voyage to the East Indies, under Captain Henry Wilson. The vessel was wrecked off the Pelew Islands, on which the crew took refuge. The island was uninhabited, but the sailors formed a friendly alliance with neighboroughing islanders and took part in the wars of the natives. The crew then built themselves a small vessel and sailed for Macao. During this voyage Devis received two wounds from arrows shot from the coast, one in his body, the other in his check, which caused a permanent injury to his jaw. Devis left the rest of the crew at Macao, spent a year in China, then proceeded to Bengal. He settled in India for ten years, establishing a modestly successful practice as a painter of portraits and local scenes.

In 1795 he returned to England and worked with great zeal, earning himself a reputation as a serious artist. He painted a number of important historical pieces, including “The Conspiracy of Babington in the reign of Queen Elizabeth” and “Cardinal Langton and the Barons forcing King John to sign Magna”. He soon became established as one of the most talented British artists of the early nineteenth century.

Devis is particularly noted for being involved in the creation of the posthumous cult of Horatio Nelson. After the battle of Trafalgar, he went out to meet the Victory, and painted the acclaimed piece ‘The Death of Vice-Admiral Lord Viscount Nelson, K.B., in the cockpit of H.M.S. Victory, 21 Oct. 1805.’ For this work Devis made various sketches on board HMS Victory, including of Nelson’s body during the autopsy by Dr. Beatty, the ship’s surgeon. The completed picture has become the definitive image of Nelson’s heroic end; it was engraved by W. Bromley (1812), and presented by the Right Hon. Lord Bexley to the gallery of Greenwich Hospital in 1825. At 8 feet 7 inches by 6 feet 4 inches it is of stunning proportions. Devis’ large oil sketch for the piece was purchased by Queen Victoria, December 1852.

Devis was also commissioned by Dr. Beatty to produce a half-length painting of Nelson as Vice Admiral, which was lent to Emma Hamilton, who later lost it whilst travelling. Either the original or a copy of this portrait was exhibited at the Royal Academy two years after the Battle and many copies were made of it, including one in the National Maritime Museum.

Devis exhibited a total of sixty-five pictures at the Royal Academy between 1779 and 1821. His equestrian portrait of ‘Alexander Sinclair Gordon, Esq.’, was engraved by Anthony Cardon in 1805; ‘The Battle of Waterloo,’ engraved by John Burnet in 1819; ‘An Indian Interior,’ by P. W. Tomkins in 1797; ‘The Little Mountaineer,’ by E. Scriven in 1809, who also engraved Devis's illustrations to J. J. Howard's translation of the ‘Metamorphoses of Ovid,’ London, 1807. Thus images of Devis’ work have become well known through the years. Today there is a portrait of Arra Kovger by Devis in the British Museum, and a portrait of Governor Herbert ( painted in Calcutta in 1791) in the National Portrait Museum.

Despite his talent, Devis was completely unable to manage his financial affairs. He therefore never maintained the status in society that his talent deserved. He was, generous, but simply hopeless with money, and was declared bankrupt in 1800. In 1804 he was even in prison for debt. Between 1802 and 1810 he received continual assistance from John Biddulph of Ledbury, but these well-intentioned interventions did not produce the results hoped for, and Devis continued to be hopelessly unreliable. Towards the end of his career he at last began to receive Royal patronage, but it was too late. When he died suddenly from apoplexy in 1822 he left his second wife and young children penniless. He was buried in St. Giles’s churchyard.