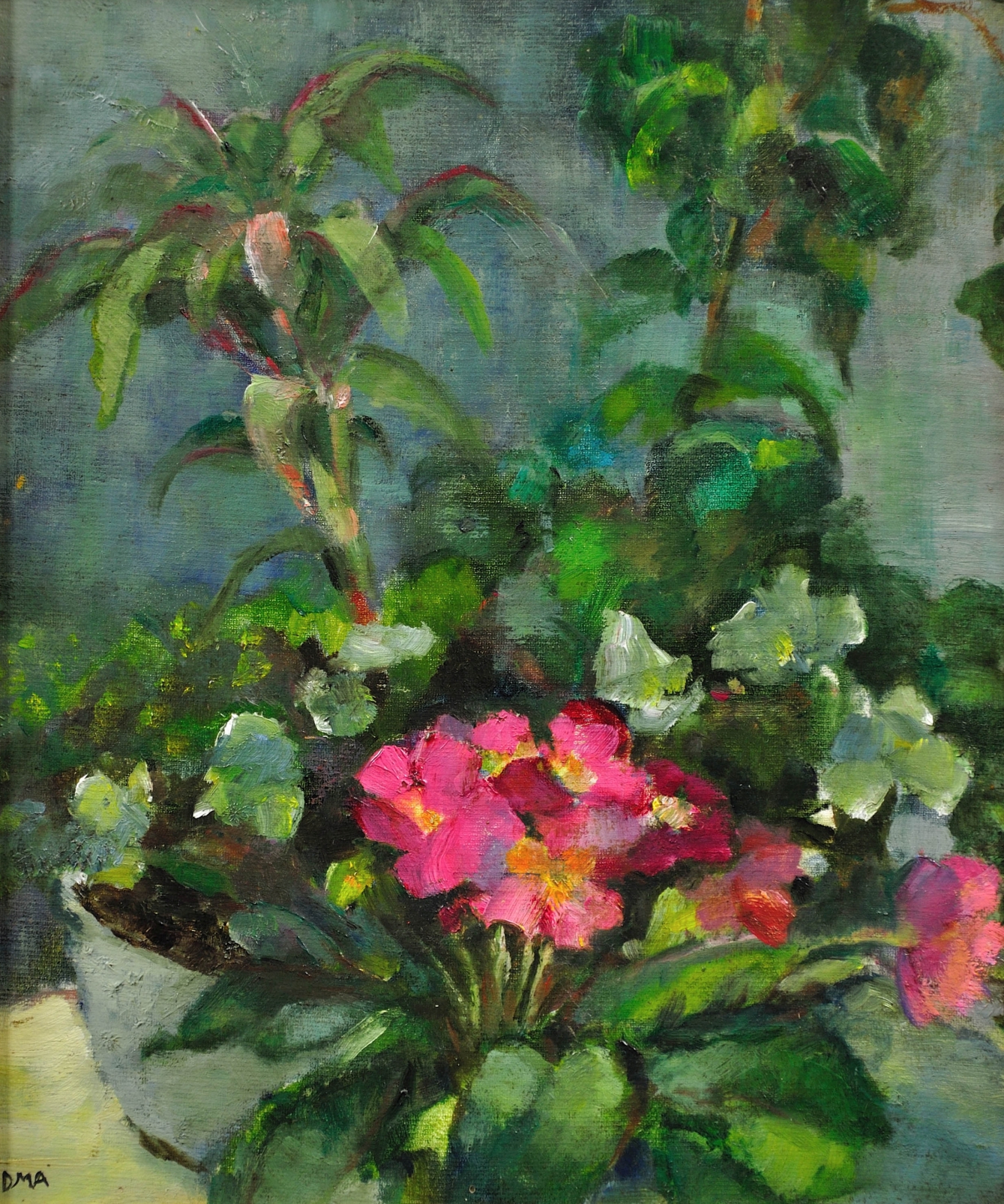 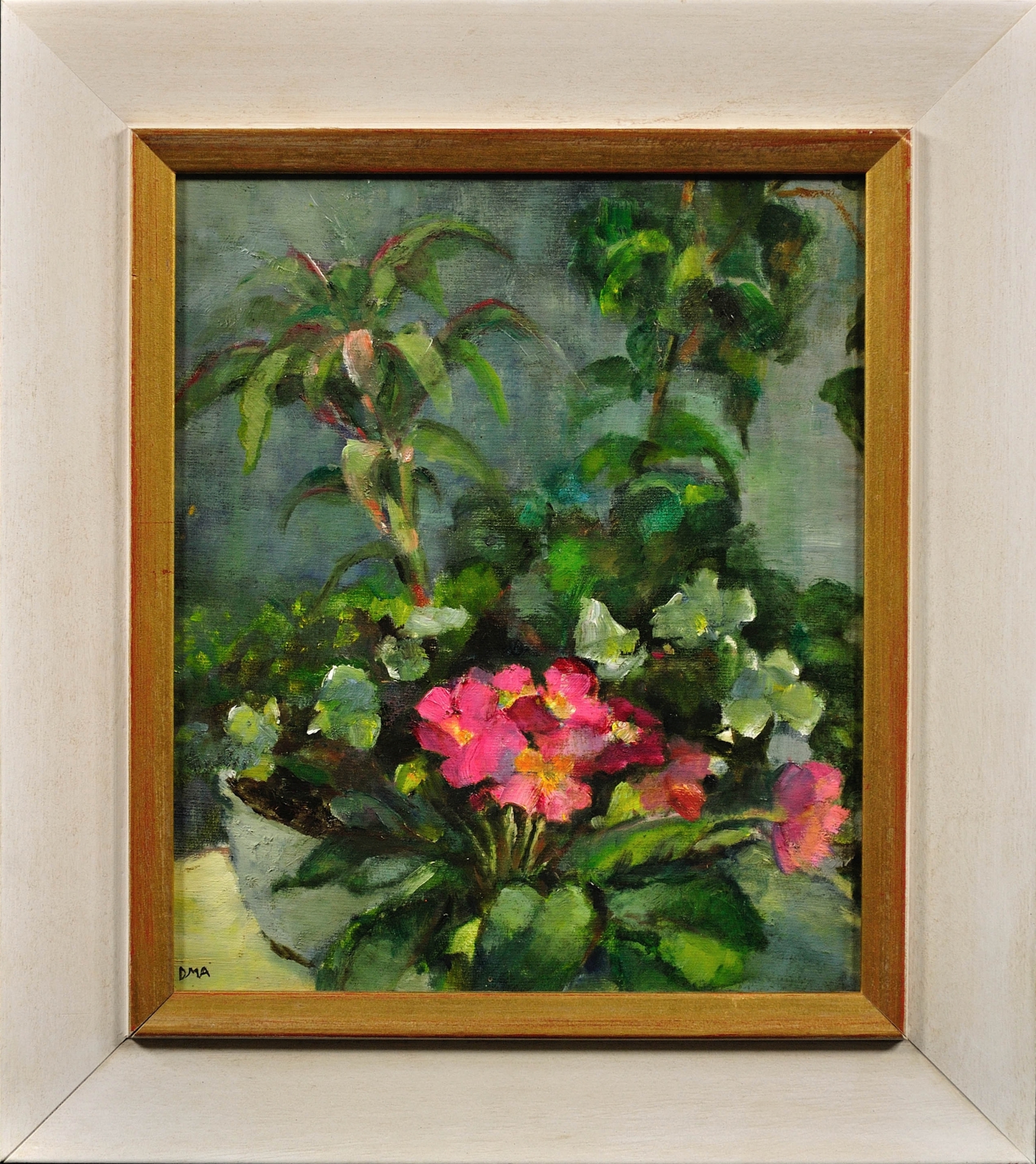 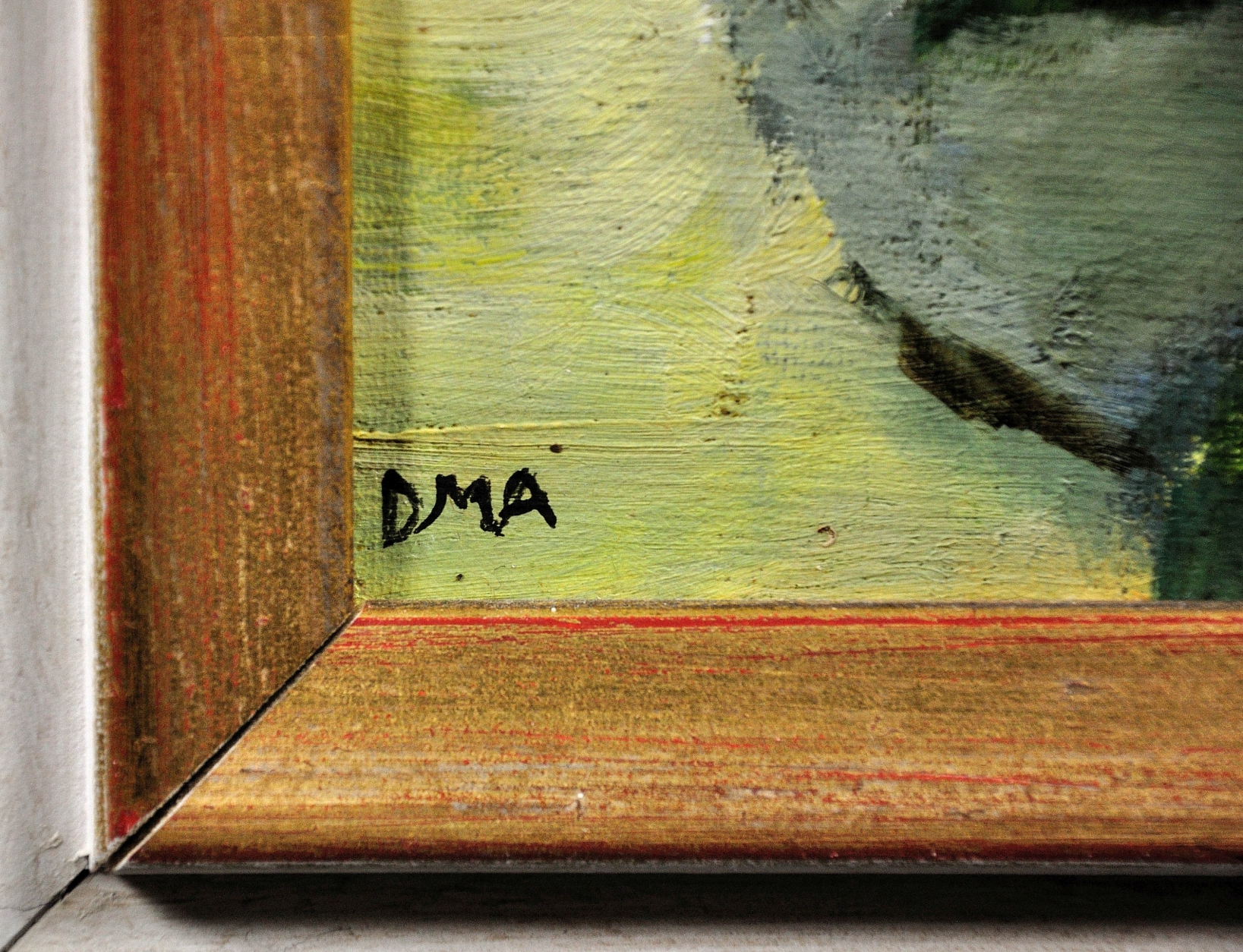 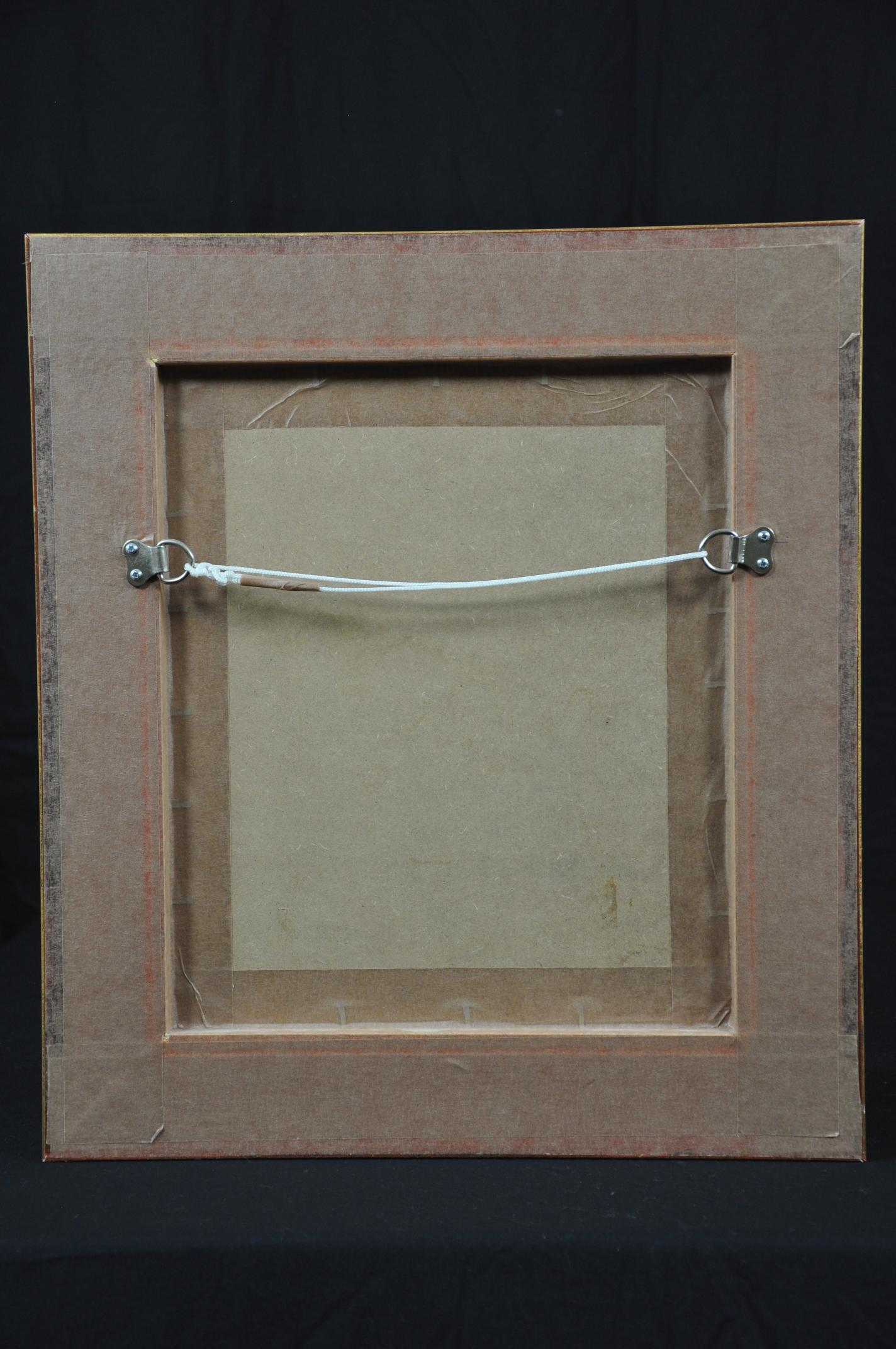 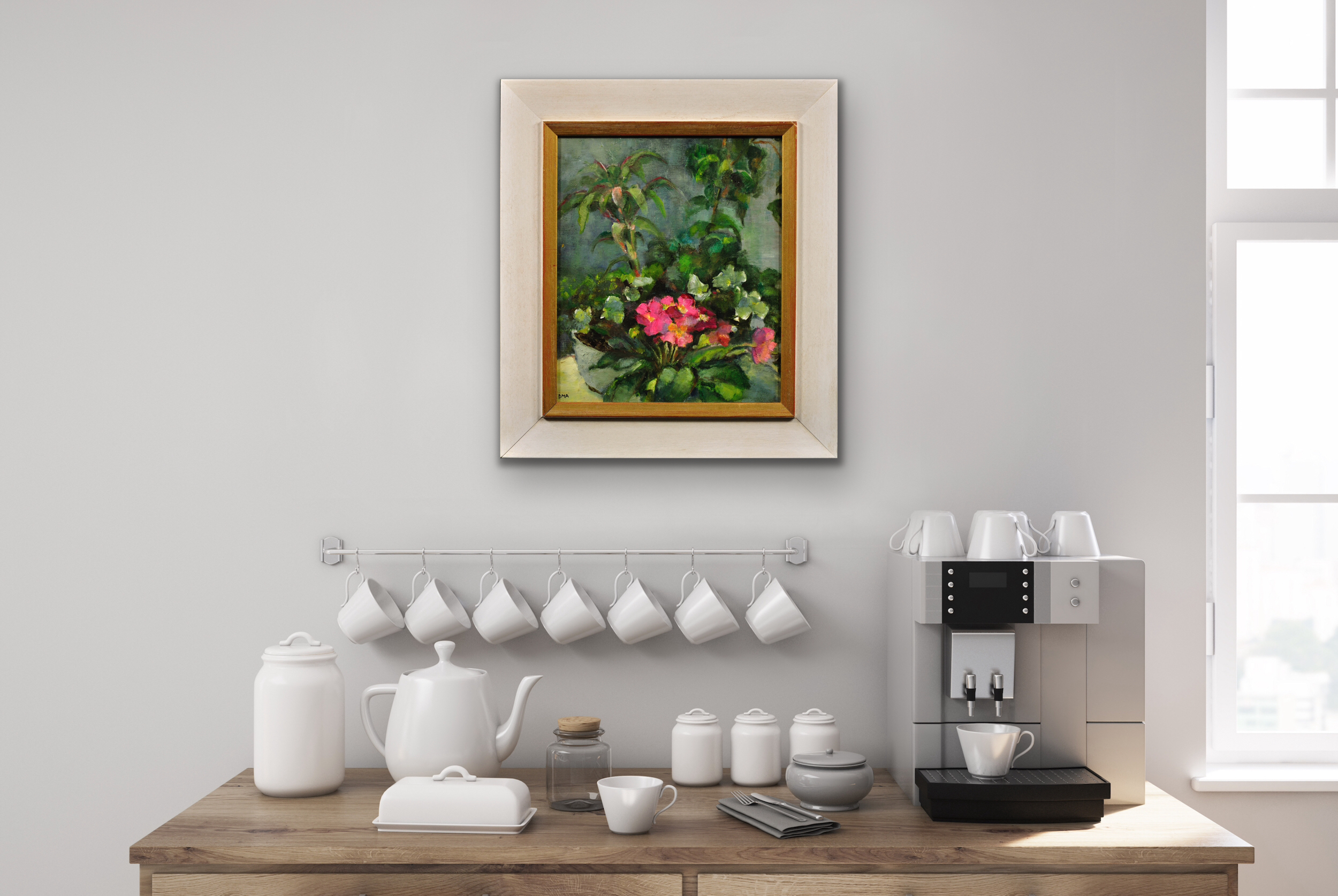 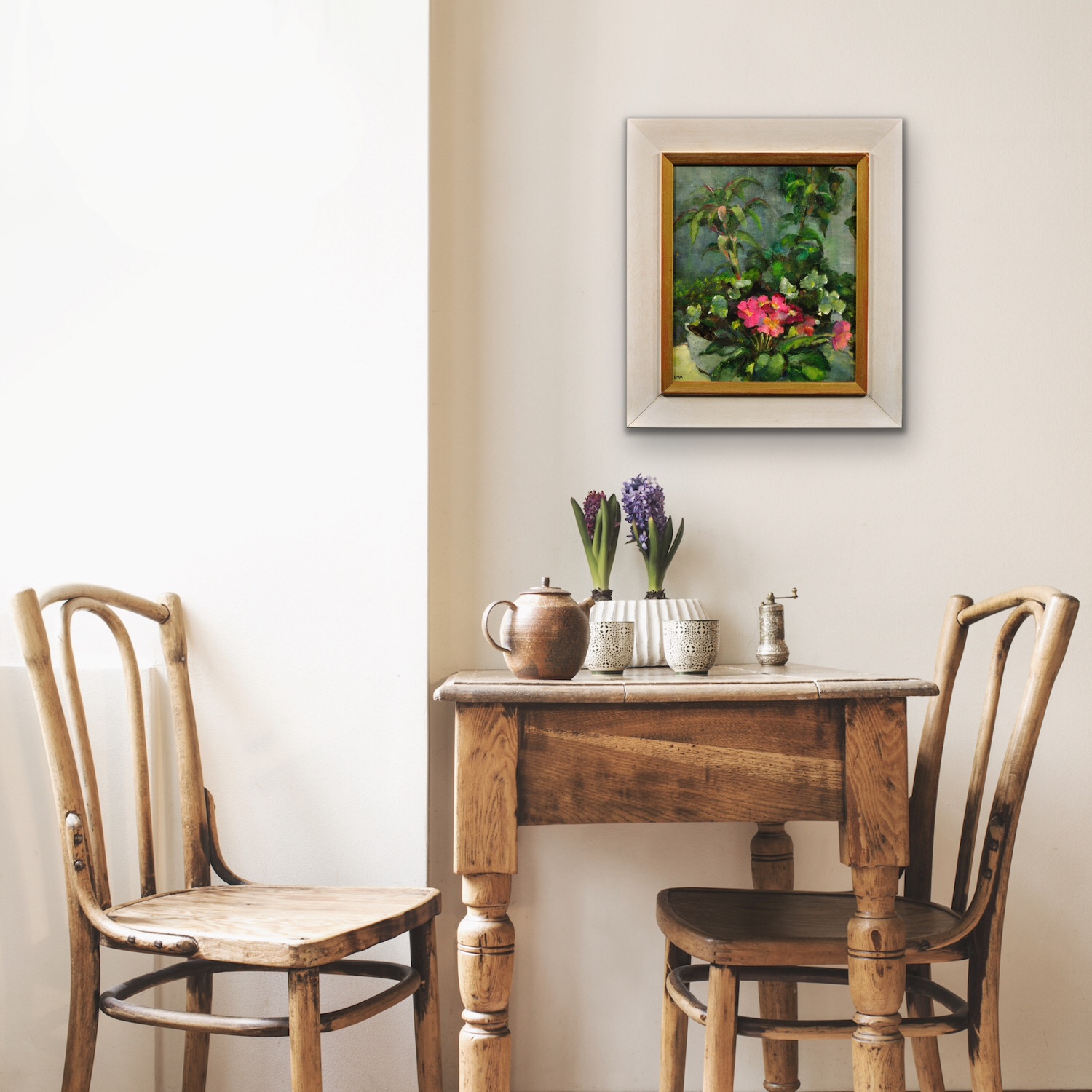 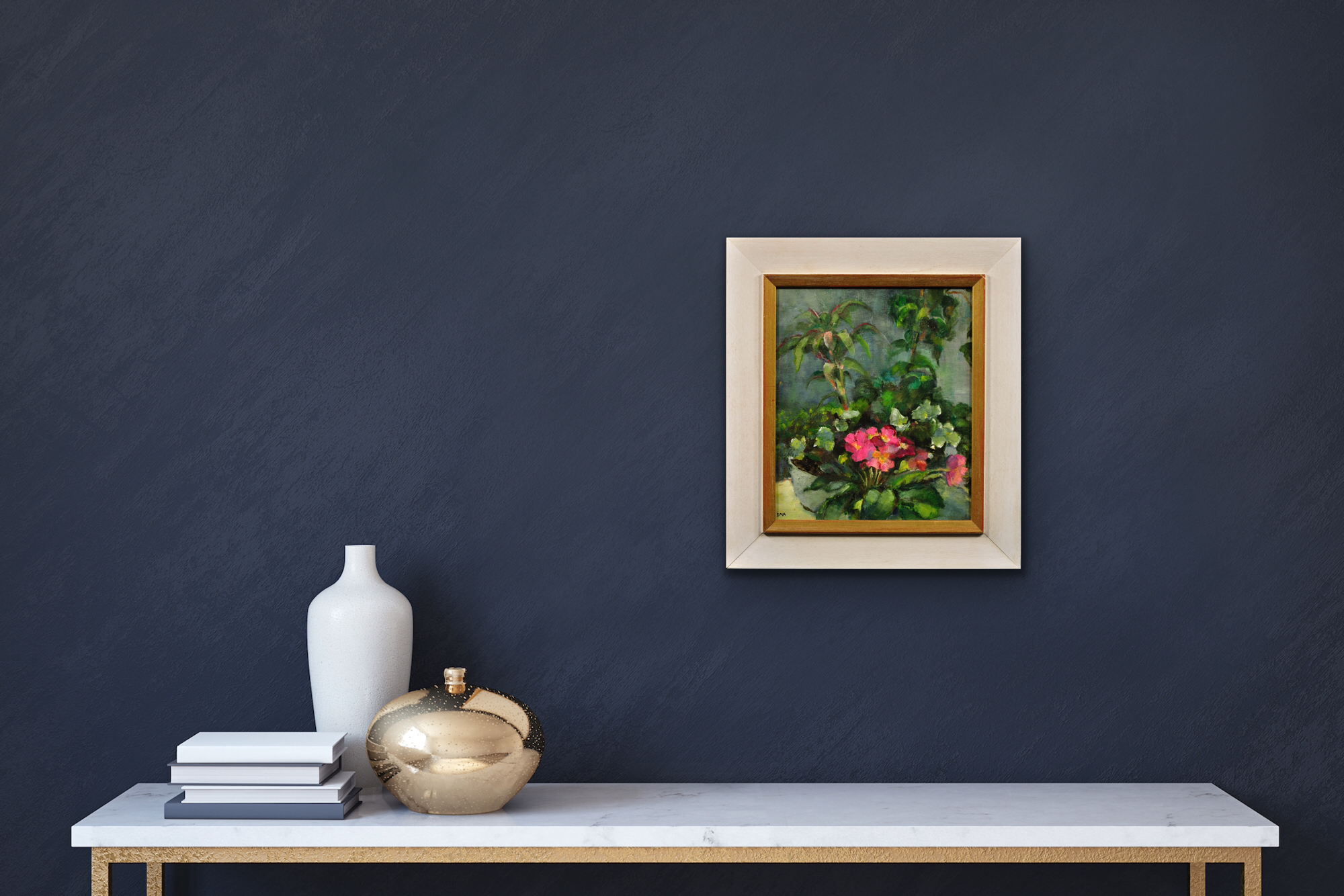 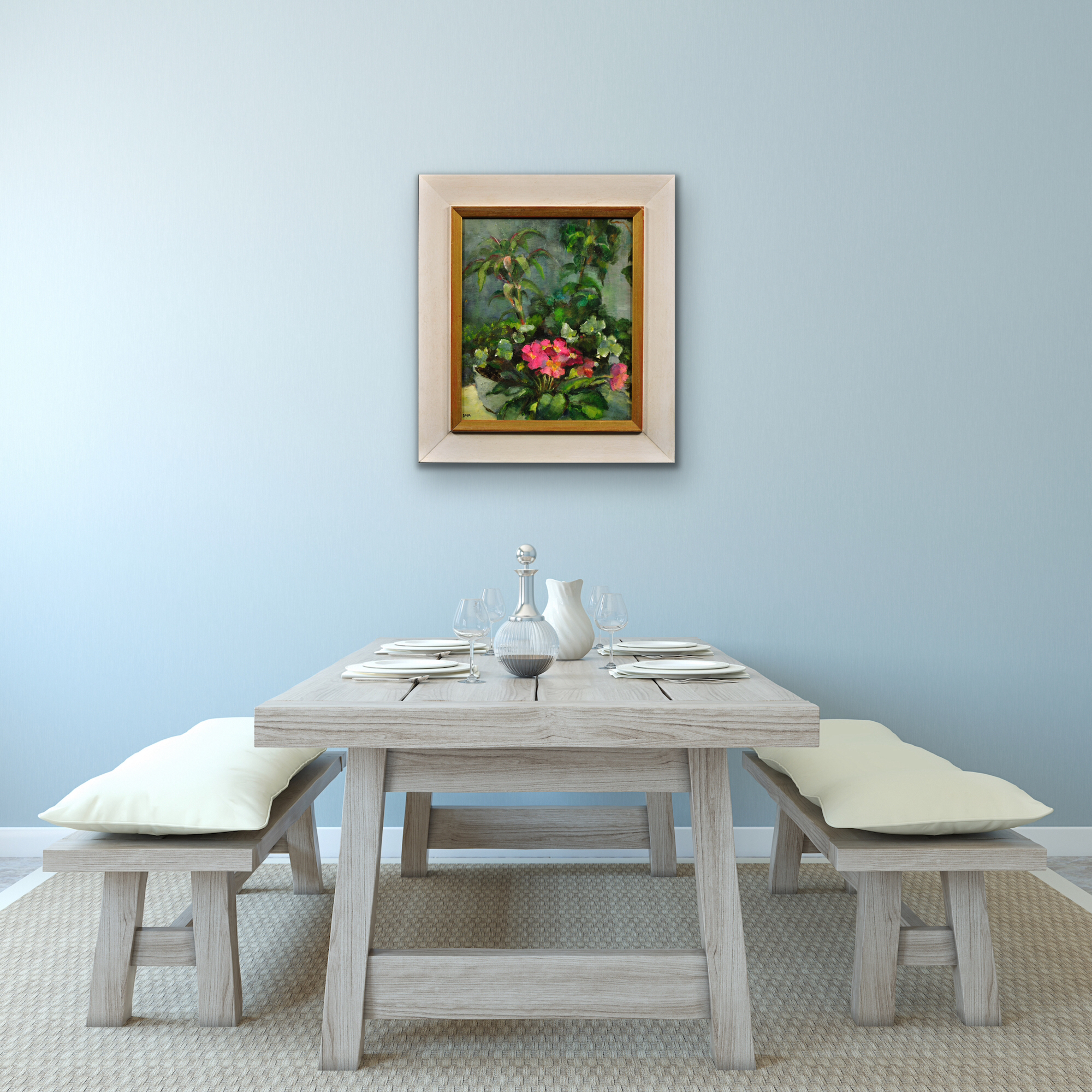 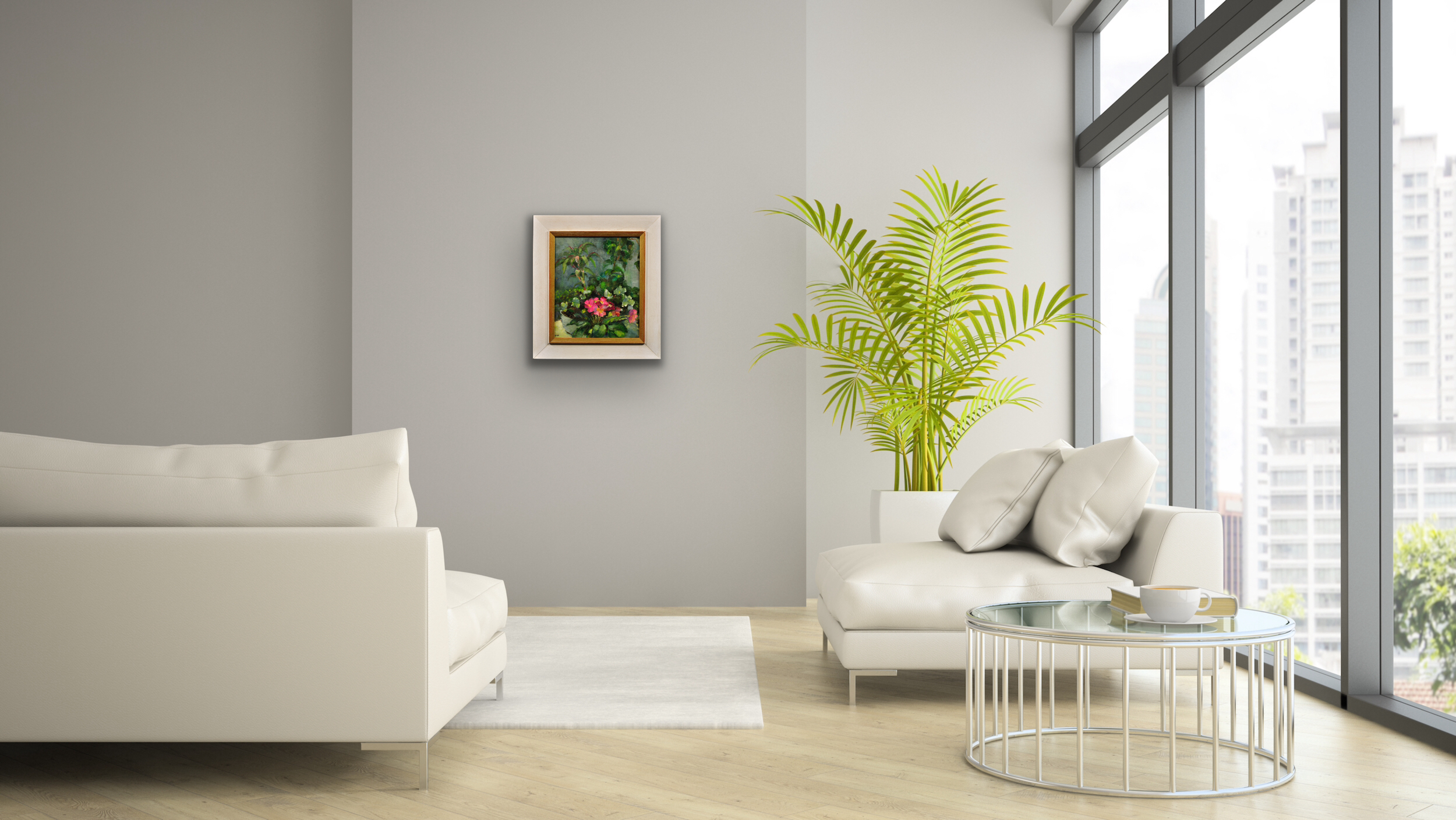 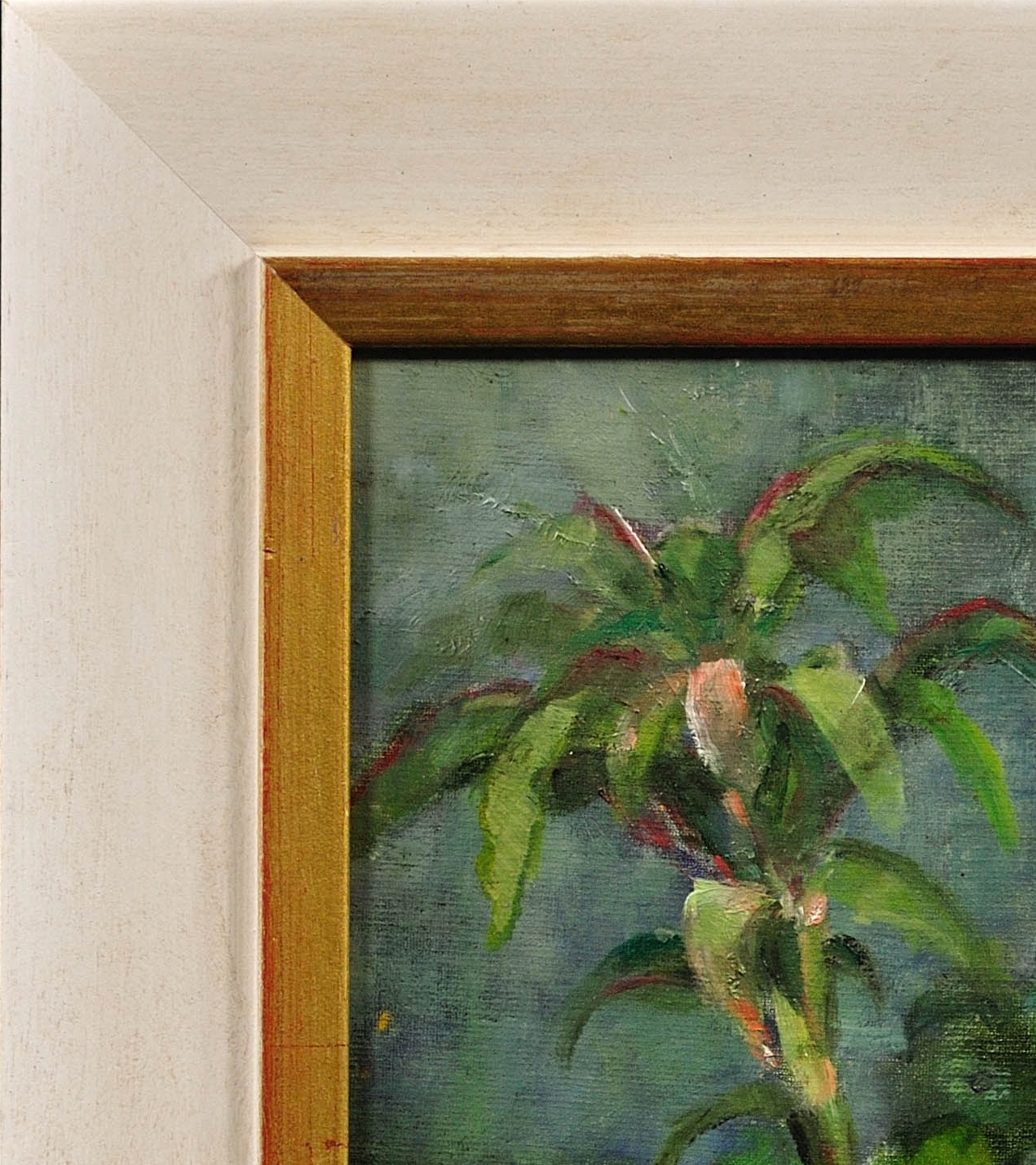 Pink Primulas and a collection of potted house plants

Available for sale from Big Sky Fine Art; this original oil painting by Diana Armfield, dating from the late twentieth century.
The painting is presented and supplied in its original frame (which is shown in these photographs).
This vintage painting is in excellent condition, defying its age. It wants for nothing and is supplied ready to hang and display.

Diana Armfield, painter, designer and teacher, was born on 11th June 1920 at Ringwood in Hampshire. She was brought up in a Quaker background, went to school at Beadales, then studied at the Slade School. She worked during the war for the Ministry of Supply organising cultural and entertainment events for soldiers and factory workers, then took up a place at the Central School of Arts and Crafts.

In 1949, after the Second World War, she married the acclaimed artist Bernard Dunstan RA, whom she had met at the Slade. She later said “Being married to a fellow painter has been a wonderful experience, an education for us both!”

Diana was a creative, practical artist and liked to make things as well as paint them. At the end of her studies she formed a business with another student, Roy Passano; the Armfield- Passano workshop was successful almost from the start as a design and printing business. Armfield-Passano products were on display at the 1951 Festival of Britain and some samples are now in the Victoria and Albert Museum. Her business partner left for Canada in 1953, and by then Diane had started her family of three sons, to whom she devoted herself for the next few years. The next stage of her career was as a teacher at the Byam Shaw School of Art, where she worked from 1959 to 1990. From becoming a professional artist at the age of 45 she started to develop her own art, with the encouragement of her husband, and never really looked back. Her output over the years has been prolific and her work has been very widely exhibited.

After showing solo at Tegfryn Art Gallery, Anglesey in 1975 and 1978, she began a long association with Browse and Darby, also exhibiting in America and Australia, where she took posts as artist in residence. In 1988 Oriel 31 Gallery in Newtown and Welshpool gave her and her husband a combined retrospective. She went on to exhibit at the Royal Academy, the Royal Watercolour Society and other major institutions. She was elected Royal Academian in 1991 and is also a member of the Royal Cambrian Academy, and practically all the other prestigious British art societies.

She has painted mostly in Wales, France and Italy. She is particularly noted for her sensitive still life of flowers, as well as rural and urban landscapes. She liked to paint what she saw, rather than what might be imagined. Among her commissions was one from the National Trust in 1988. She has also produced several small oils of the garden and drawing room at Highgrove for HRH The Prince of Wales.

Today her work is held by the British Museum, the Contemporary Art Society for Wales, Lancaster City Art Gallery, Royal Watercolour Society, Yale Centre for British Art and the Government Picture Collection. Her textile work is in the Victoria and Albert Museum.

Publications include Painting in Oils, 1982, and Drawing, 1982. She is also featured in The Art of Diane Armfield, 1995, by Julian Halsby.

She lived in London and for some years in Bala, North Wales, but now lives at Kew in Surrey. She exhibited well into her nineties. Now in her late nineties, and recently widowed, Diana has recently reflected on her creative life in several interviews.

“I’m passionate about painting, but design was also the most marvelous discipline and I wouldn’t have been without it,” she insists. She is, entirely typically, modest about her own achievements. “If you had told me at the age of 16 that I would have a career like this, I would have fallen down with amazement, which is what I did when Bernard phoned me with news of my election to the RA!”…..” Art is a wonderful thing – to have had the opportunity to practice it throughout my life and to have been married for so long to someone with whom I could talk endlessly about it has been an immense privilege.”

This original oil on board depicts a still life of a pink primula plant in front of a larger potted collection of green houseplants. The plants sit on a cream coloured table top, and are displayed against a deep turquoise blue backdrop. The palette is an array of bright greens, with touches of red, and there are petals of pink and white, tinged with shades of yellow. The plants are healthy and lush, all leaves and shoots and flowers. The piece is decorative and has a very positive aura.

For deliveries to EU countries, we will pay the pay VAT so you don't have to - prices are inclusive of EU VAT.
With respect to import customs duties for your EU country we will send the consignment using the appropriate Common Customs Tariff number heading 9701000000 which provides the benefit of ZERO CUSTOMS DUTIES courtesy of the UK - EU Trade & Co-operation Agreement.