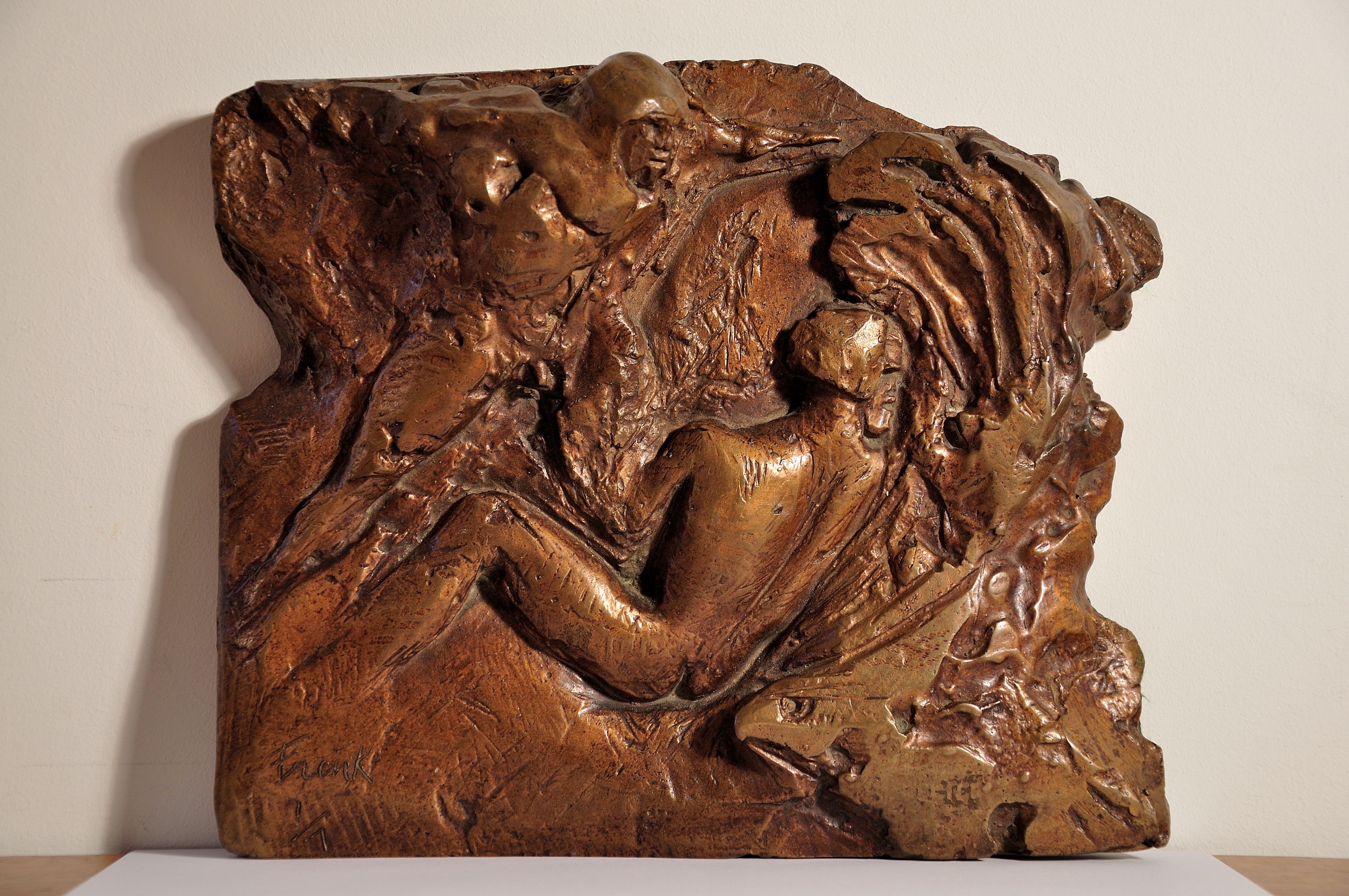 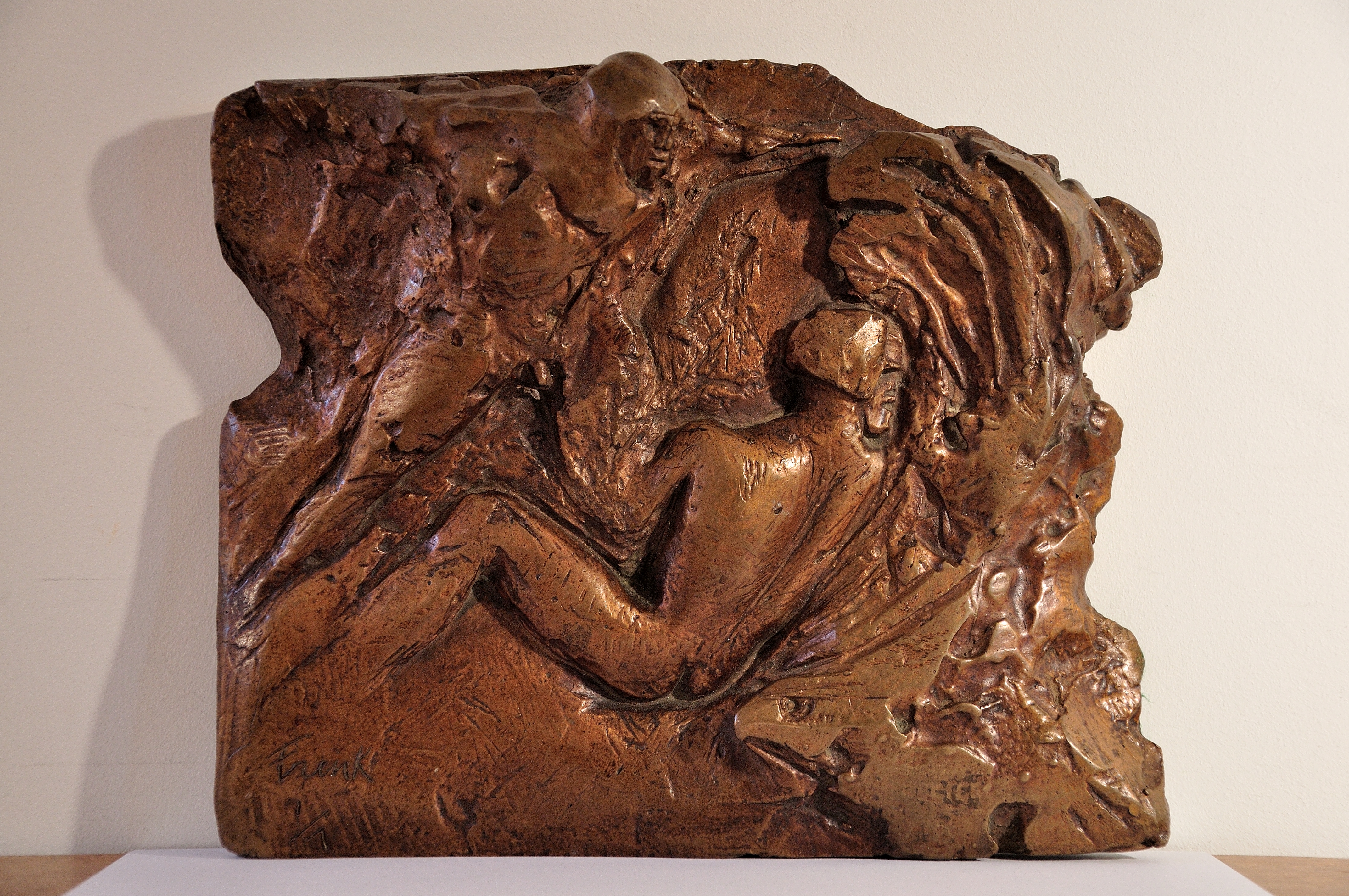 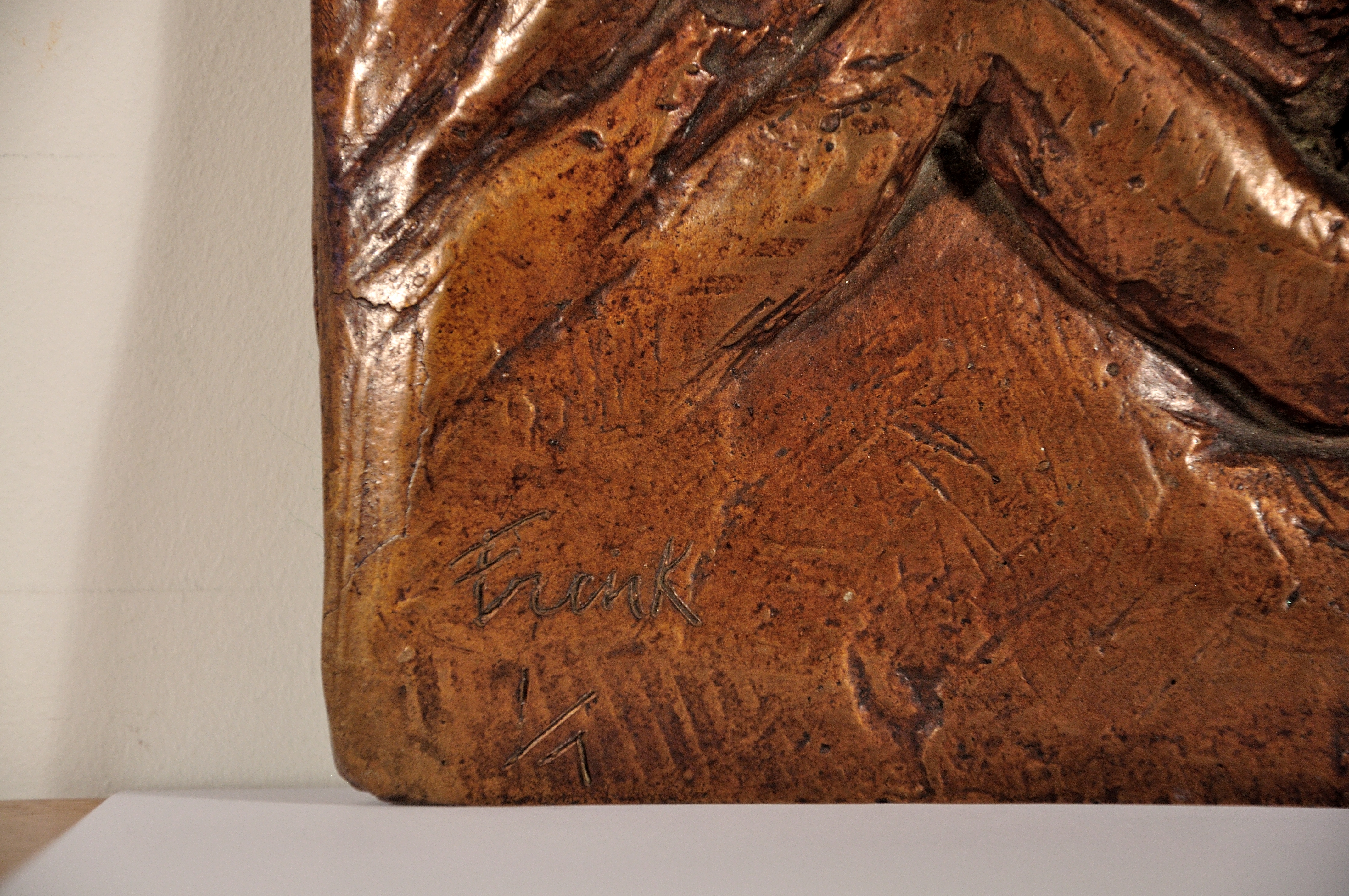 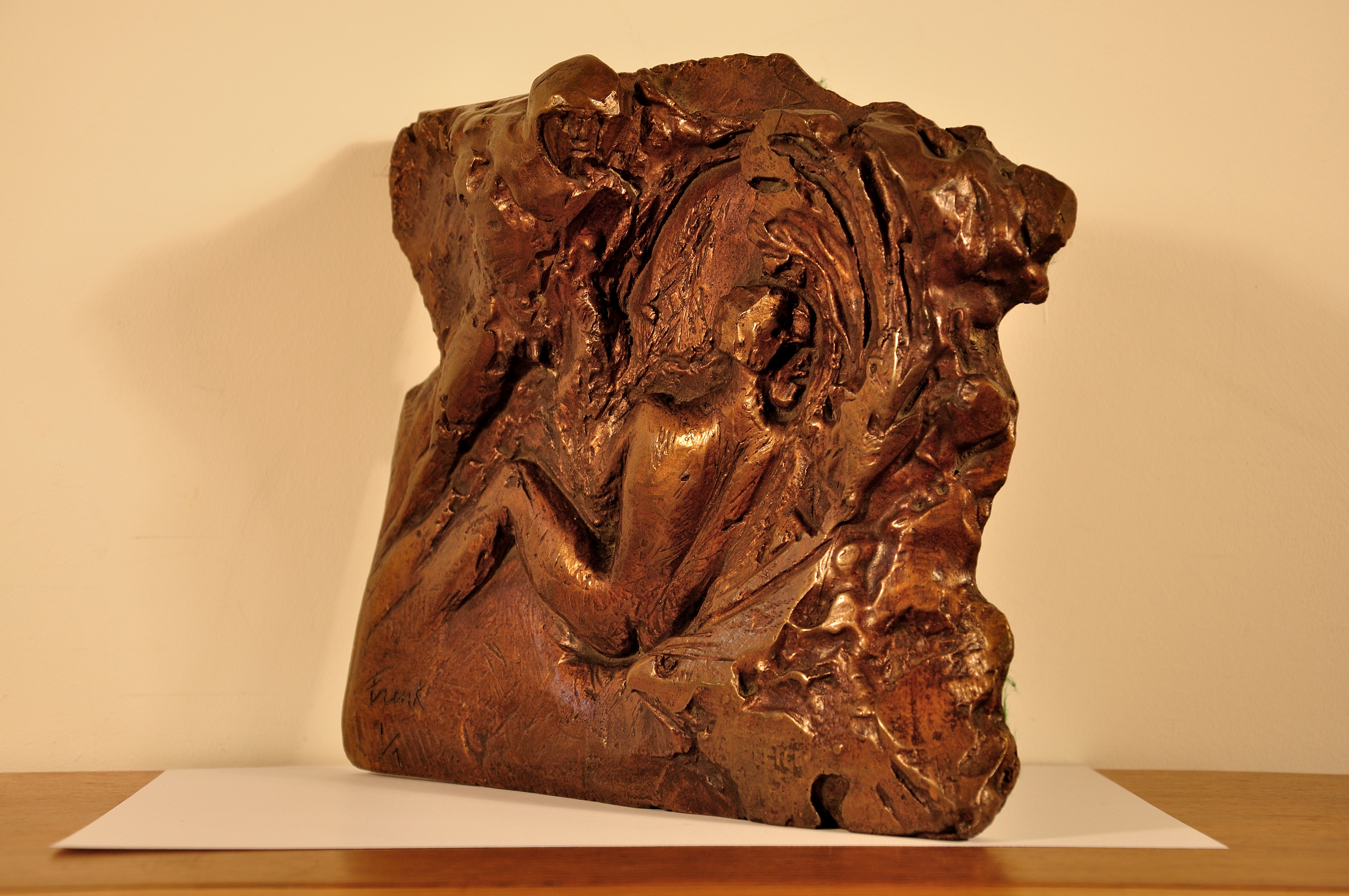 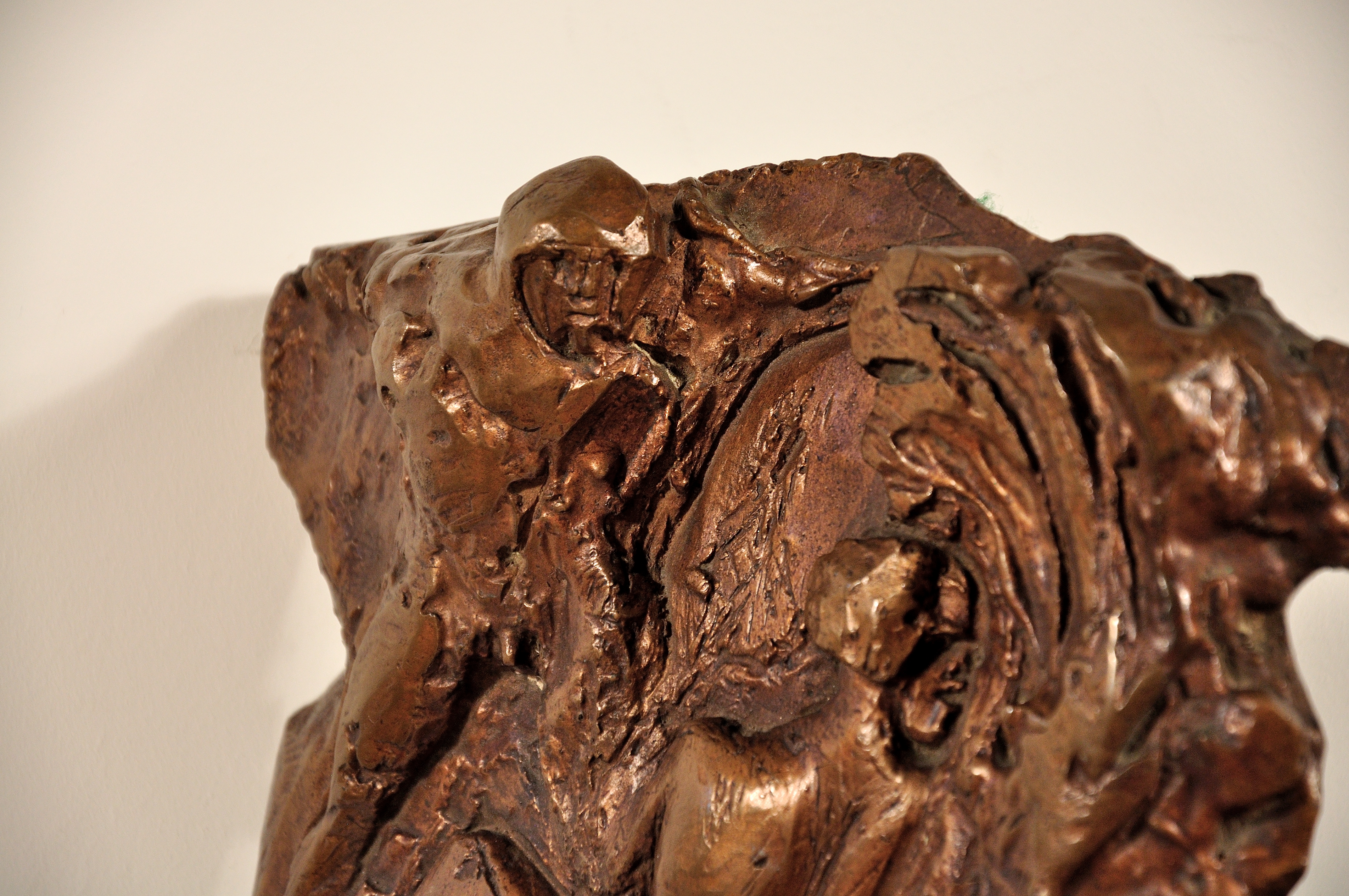 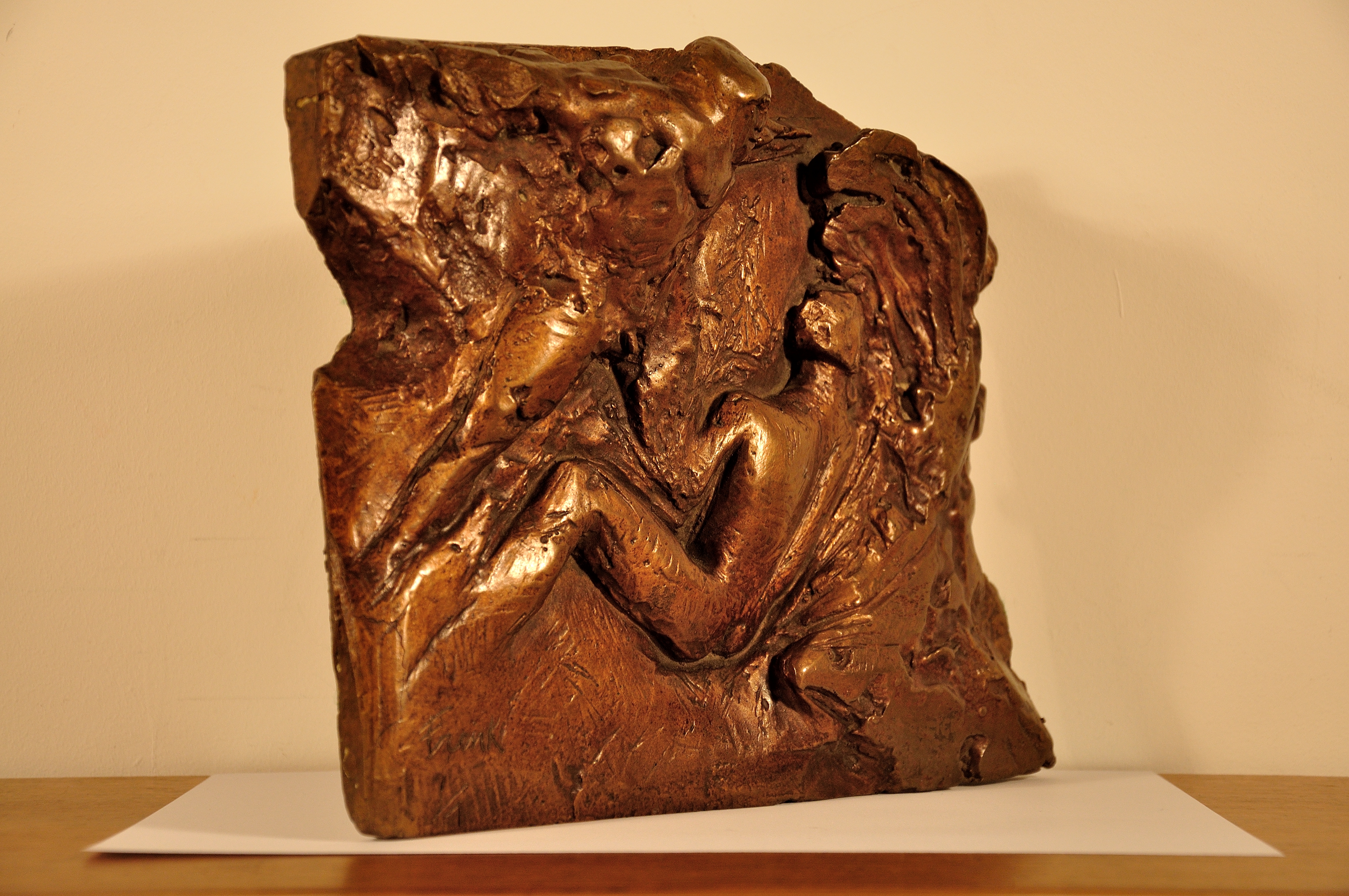 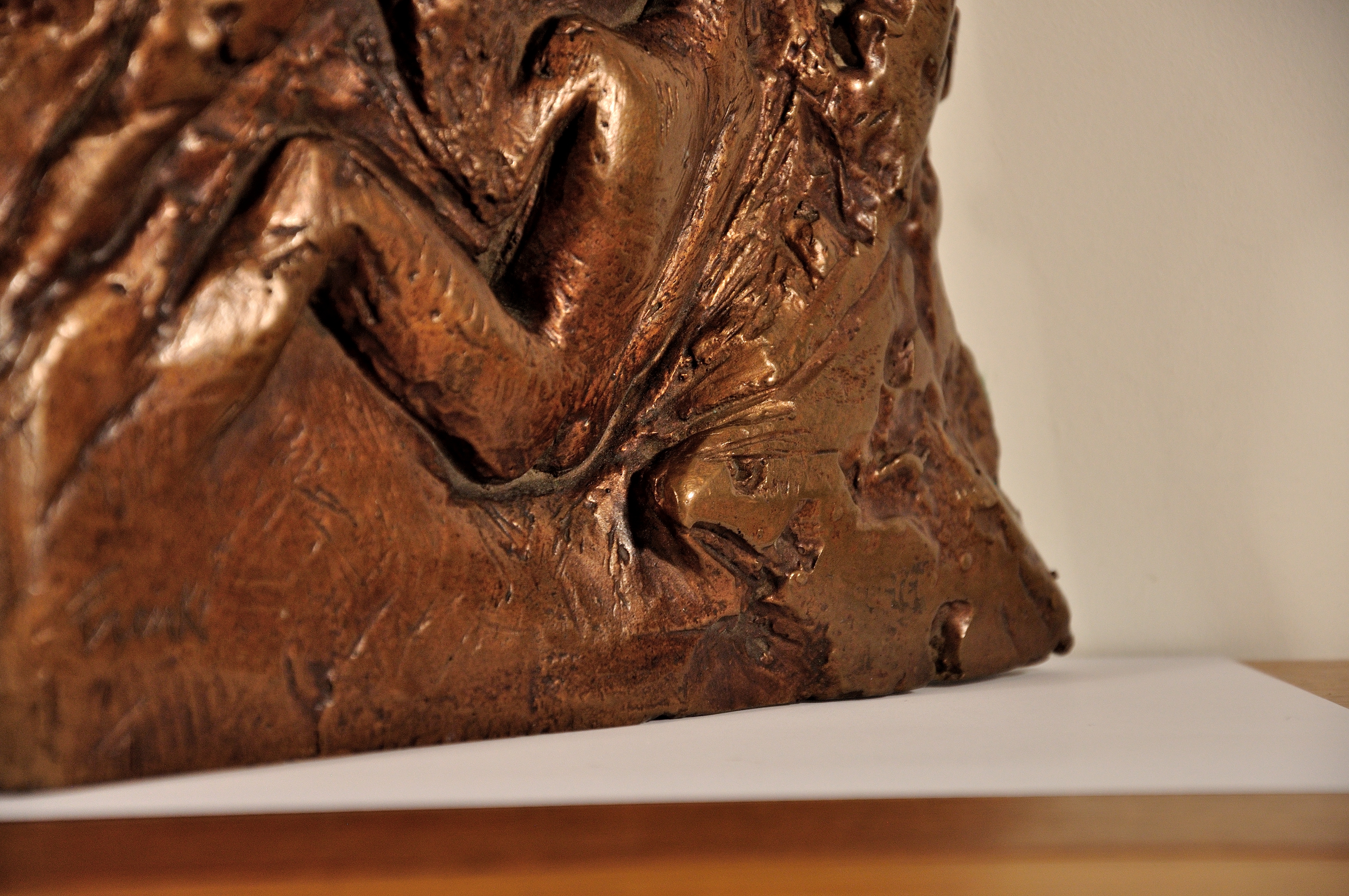 Maquette for Man and Eagle

Available for sale from Big Sky Fine Art; this original bronze sculpture with raised relief by Dame Elisabeth Frink; conceived and cast in 1967.
The maquette is presented and supplied unmounted. There is the option to hang the sculpture from 2 rings which were fitted to the rear when in previous ownership.
This vintage bronze sculpture is in very good condition with a uniform gold brown patina overall.
The maquette is signed and numbered 1/7 lower left.
Literature:
B. Robertson, Elisabeth Frink Sculpture: Catalogue Raisonné, Salisbury, 1984, pp. 170-171, no. 158, as 'Bronze plaque (maquette for Man and Eagle Relief)'
A. Ratuszniak, Elisabeth Frink: Catalogue Raisonné of Sculpture 1947-93, Farnham, 2013, p. 106, no. FCR183, as 'Bronze plaque (maquette for Man and Eagle Relief)'.

Dame Elisabeth Frink was one of Britain’s most important post-war sculptors, an accomplished draughtsman, illustrator and teacher. She was part of the post-war school of expressionist British sculptors dubbed the Geometry of Fear, and enjoyed a highly acclaimed career that was commercially successful, broke boundaries and contributed greatly to bringing wonderful sculpture to public places.

She was born on 14 November 1930 in Thurlow, the daughter of a cavalry officer, and brought up in rural Suffolk near to an active airbase. She was brought up a Catholic and educated at the Convent of the Holy Family, Exmouth.

Frink first came to the attention of the public in 1951 at an exhibition at the Beaux Arts Gallery, London. In 1952 she represented Britain at the Venice Biennale, being described by Herbert Read as “the most vital, the most brilliant and the most promising of the whole Biennale”. The same year the Tate bought its first work by her, and she began to enjoy commercial success. Thereafter she exhibited regularly and was for 27 years associated with Waddington’s, London.

The subjects which Frink was most concerned with were man, dog and horses, with and without riders. Interestingly she seldom sculpted the female form, drawing on archetypes of masculine strength, struggle and aggression. Her work has the recurring themes of the vulnerable and the predatory, in the spirit of an authentic post-war artist. It has been said that she was more concerned with representing mankind that portraits of individuals.

The appeal of her work lies in its directness, provoking a frank statement of feeling. The anatomy is often exaggerated or incorrect; the impact growing more out of her interest in the spirit of the subject. Her animals and birds may be drawn from nature but verge on the abstract, conveying raw emotion and character rather than a realistic depiction. Her unique style is characterised by a rough treatment of the surface which embeds each piece with vitality and her personal impression. In her later work even the distinction between human and bird figures becomes blurred. Commentators have noted that the often rugged, brutal and contorted surfaces of her work reflect the destruction and terror of the six-year world-wide conflict that she witnessed as a child. Frink was an active supporter of Amnesty International.

In the 1960s and early 1970s Frink produced a notable series of falling figures and winged men. Later, living in France during the Algerian war, she began making heads, blinded by goggles which had a threatening facelessness.


Frink produced many notable public commissions, including Wild Boar for Harlow New Town, Blind Beggar and Dog for Bethnal Green, Noble Horse and Rider for Piccadilly, London, a lectern for Coventry Cathedral, Shepherd for Paternoster Square beside St. Paul’s Cathedral and a Walking Madonna for Salisbury Cathedral. In the early 1980s she produced a set of three larger than life figures The Dorset Martyrs which stand on the edge of the old walled town of Dorchester on the site of the old gallows, as a memorial to those who had been executed there ‘for conscience sake’.

Frink’s Canterbury Tales was a collection of 19 etchings drawn directly on to copper plates and etched by her. The ‘book’ was issued in three limited editions. Her illustrations have been praised as “amongst the most successful illustrations of the century, encompassing the mood of the text in concise delineations and disarmingly ribald humour”. She illustrated other books with coloured lithographs or drawings.

Frink was on the Board of Trustees, British Museum from 1976, and was a member of the Royal Fine Art Commission 1976-81. CBR (1969), DBE ((1982), Associate of the Royal Academy (1971), Royal Academy (1977). She was made a Companion of Honour in 1992. She died on 18 April 1993, but not before completing her last commission, a monumental but unusual figure of Christ for the front of the Anglican Cathedral in Liverpool, unveiled a week before her death.

For several decades Frink exhibited widely in the UK and abroad. In her later years she lived and worked in Dorset where her garden became an arena for her work.

In 1985 she had a retrospective at the Royal Academy. She died on 18 April 1993, but not before completing her last commission, a monumental but unusual figure of Christ for the front of the Anglican Cathedral in Liverpool, unveiled a week before her death. There was a memorial show at Yorkshire Sculpture Park, Bretton Hall in 1994.

Today Frink is venerated as one of the great twentieth century British sculptors. Her unique work is represented in the Tate Gallery and major public and private collections world-wide.

This bronze maquette with gold brown patina was produced by Frink for the work Man and Eagle Relief. It is signed and numbered 1 of 7. Conceived and cast in 1967. It depicts the heavy standing figure of a man in the top left corner, bearing down towards a second naked figure, who is seated and looking away. In the bottom right hand corner there is the head of a huge eagle, its outstretched wing reaching over the head of the seated figure as if in a protective gesture.

For deliveries outside of the UK you will be liable for any import duties to the country of destination and any local sales taxes appropriate to the delivery address, if they are applicable - we will ship the consignment with the appropriate harmonized commodity code and with an accurate invoice. The appropriate Common Customs Tariff number is 9703900000 if you need to check before purchasing. All duties and taxes, if any, will be collected by the courier or delivery company and they will charge a modest standard administration charge for performing this function on your behalf. 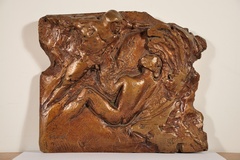