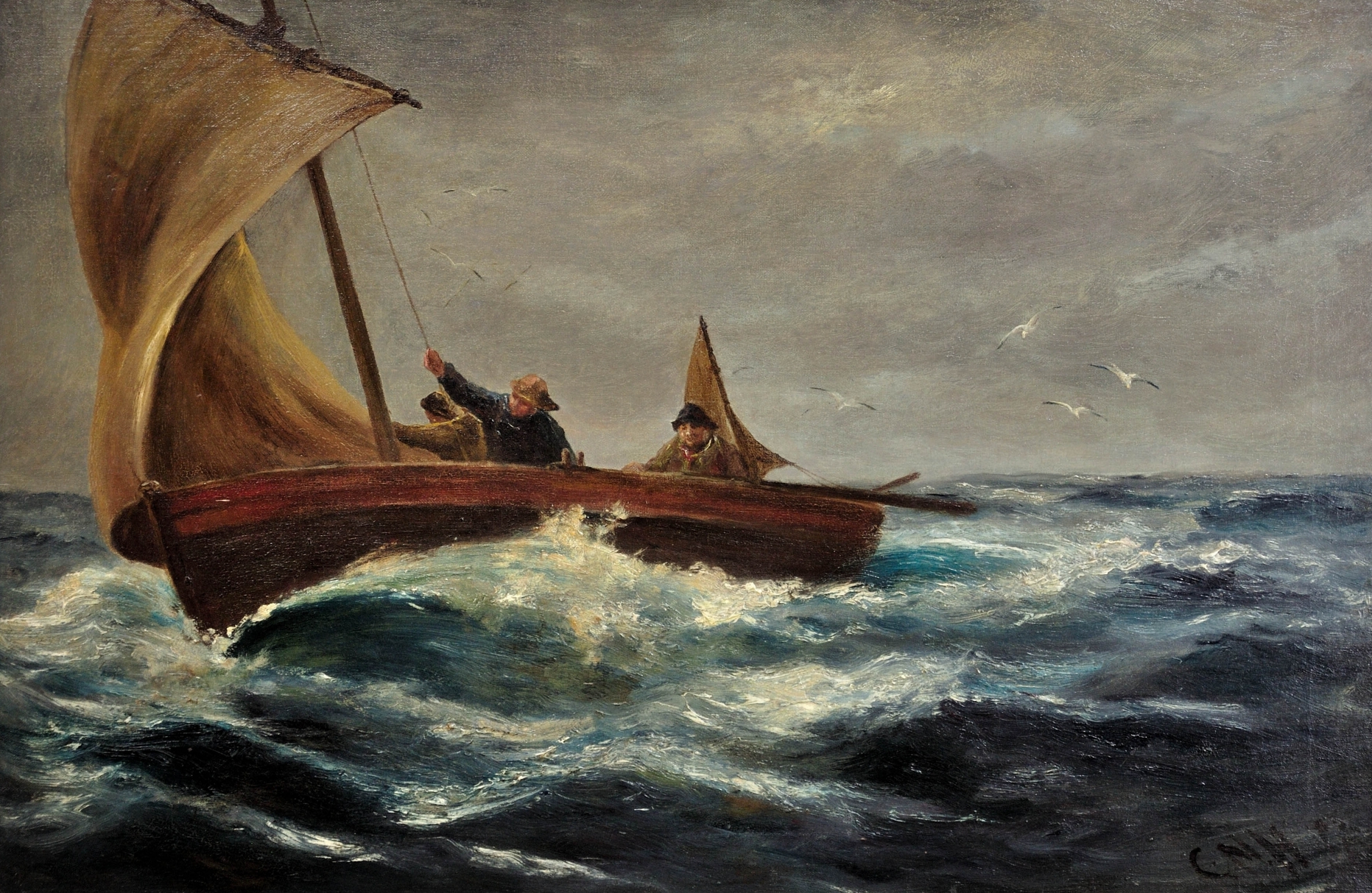 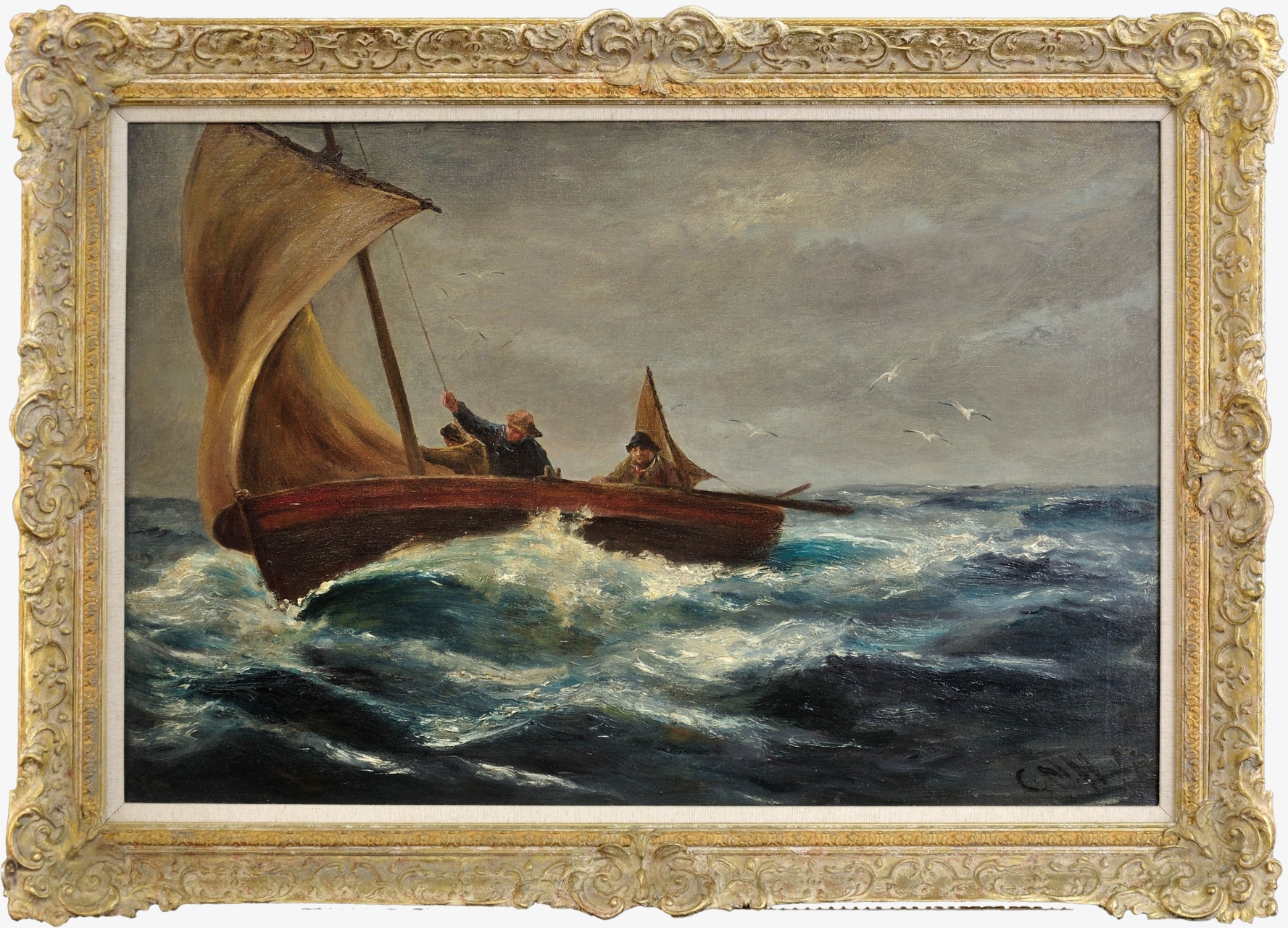 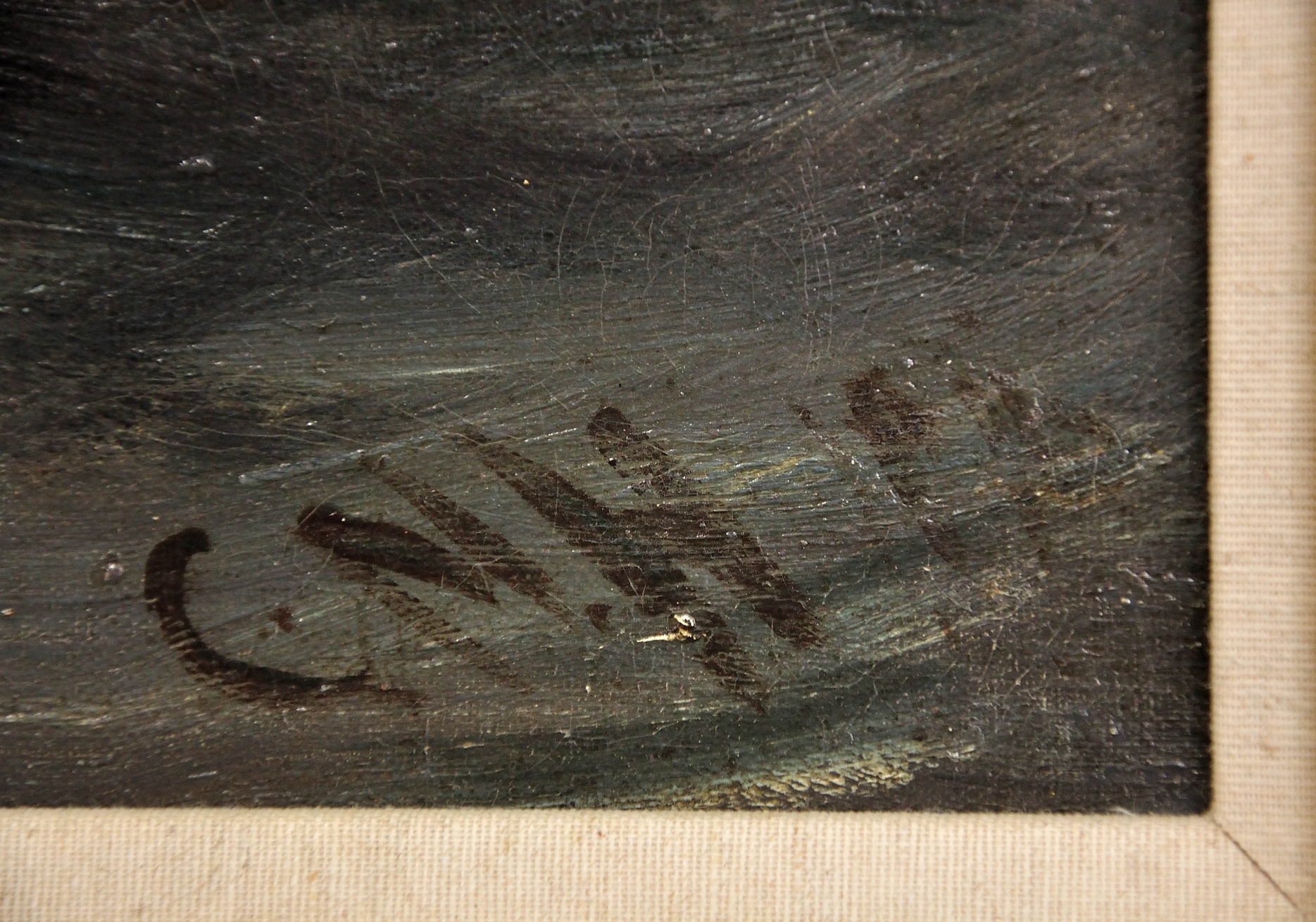 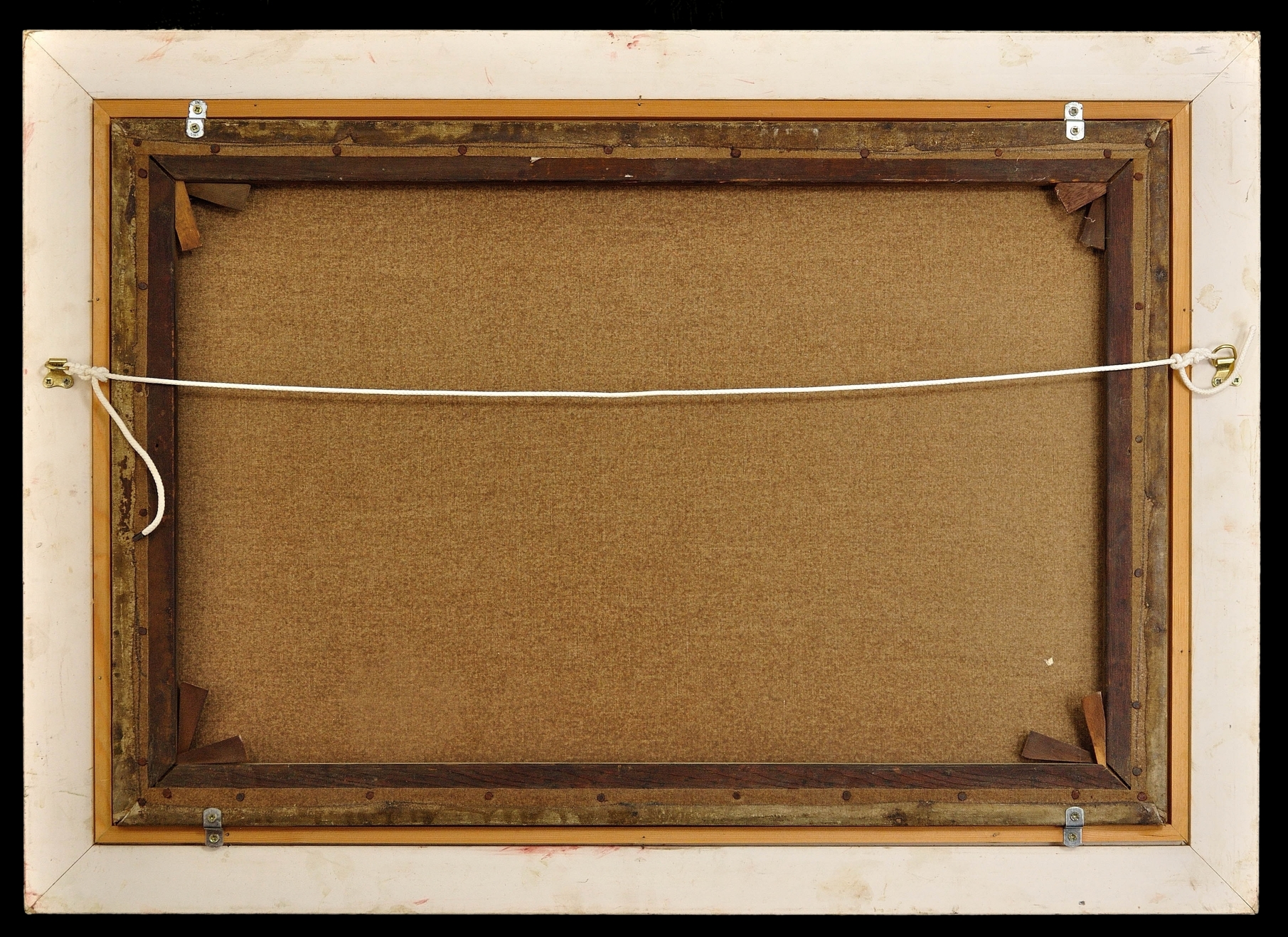 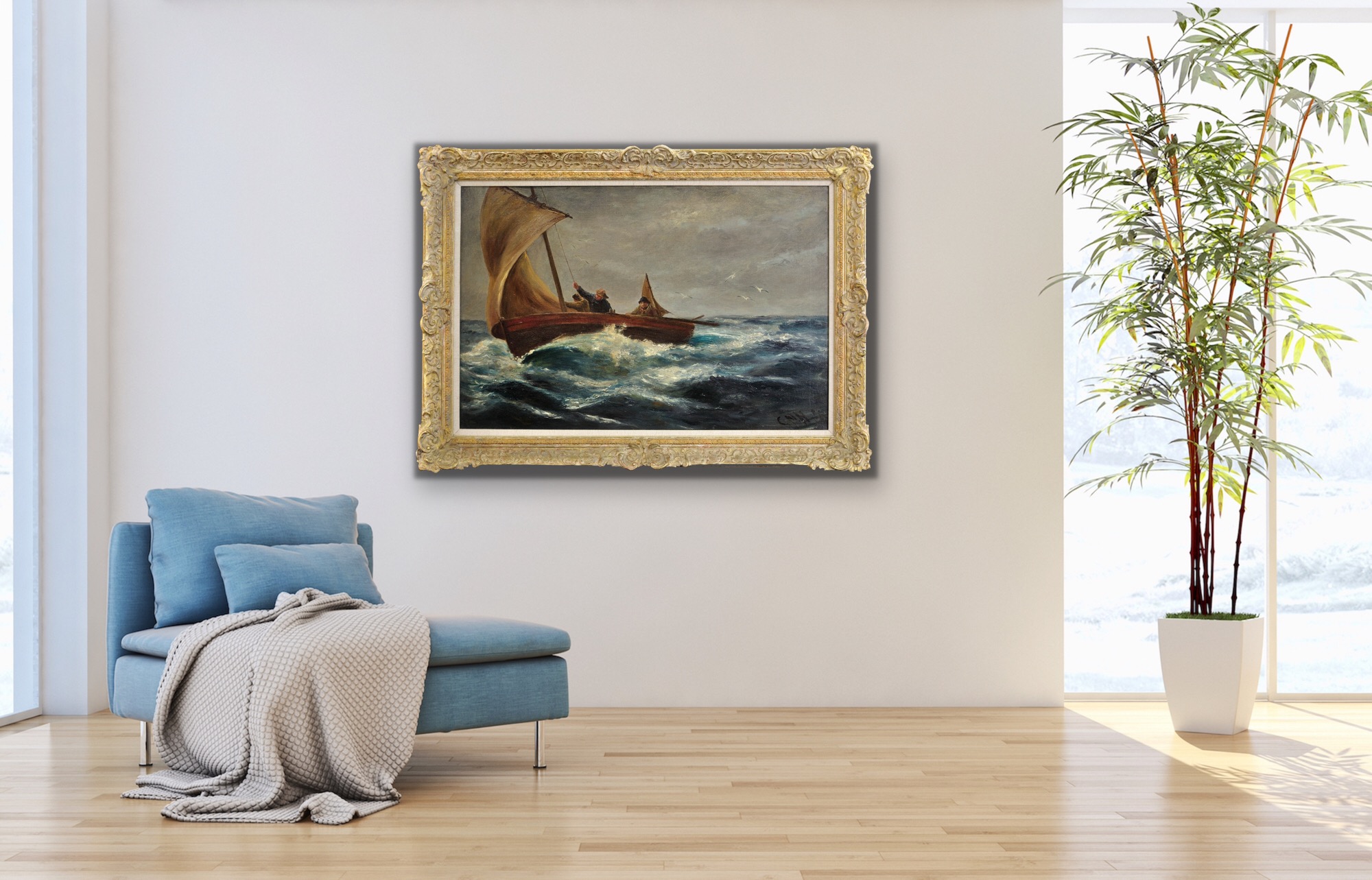 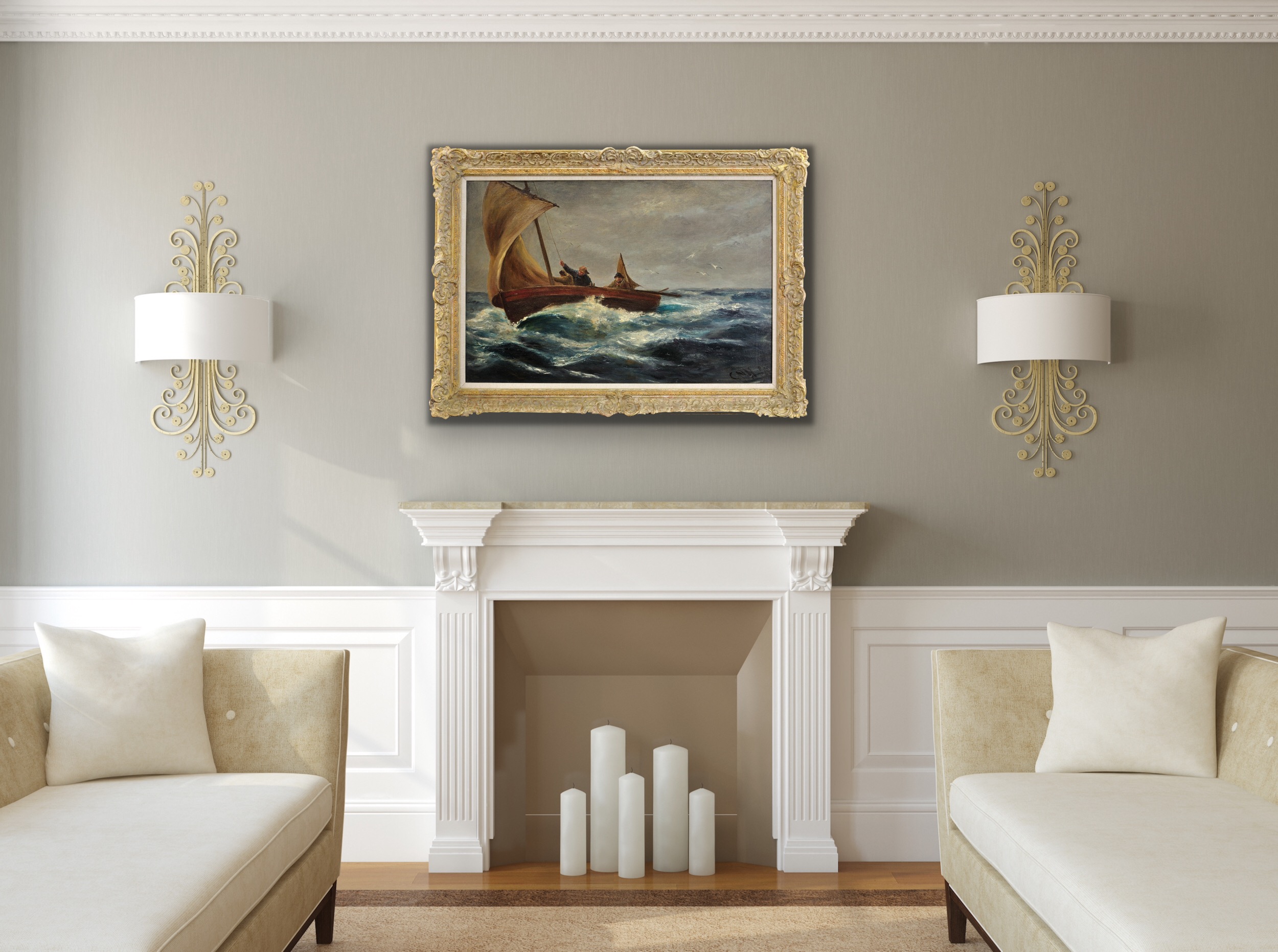 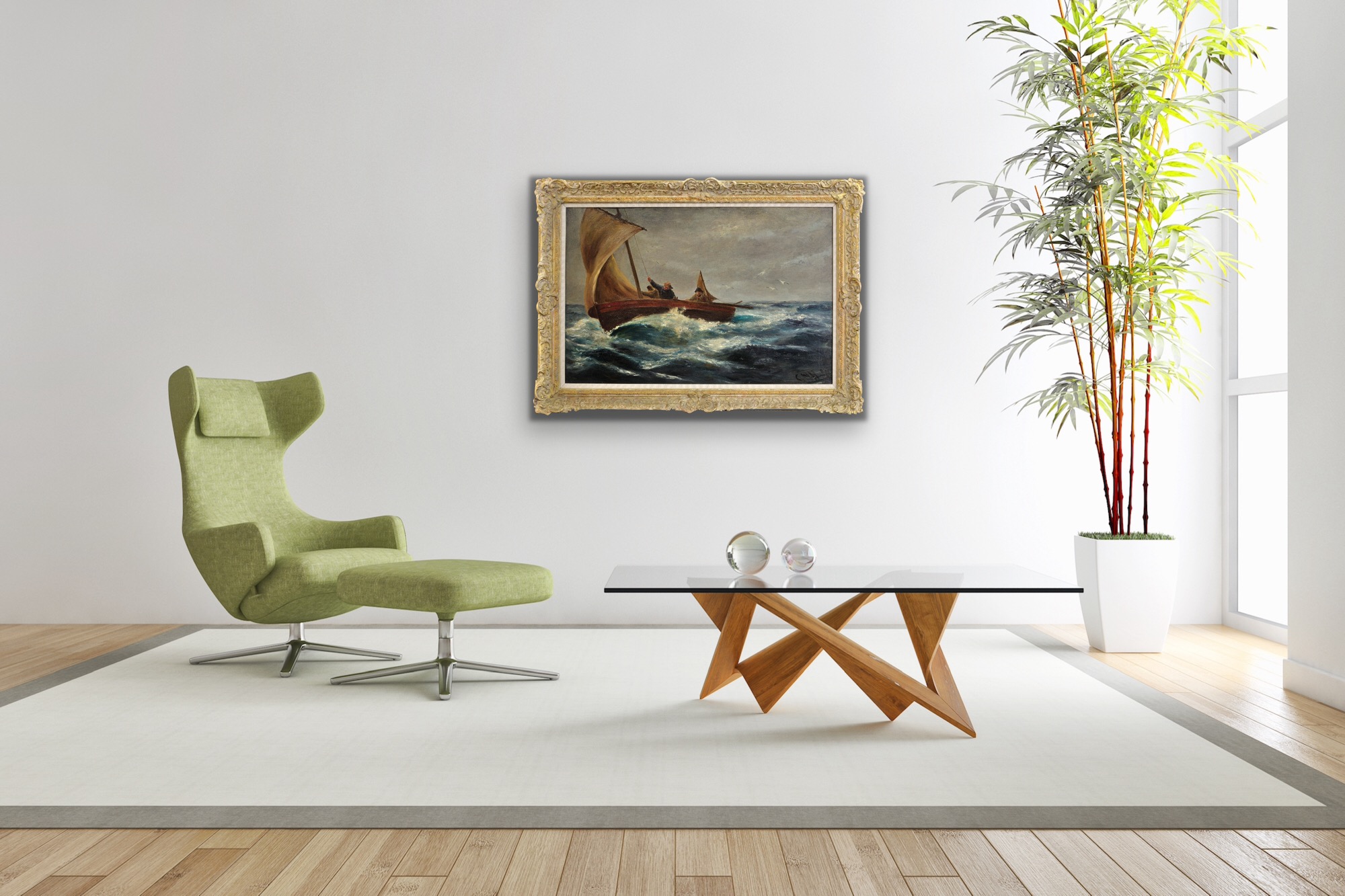 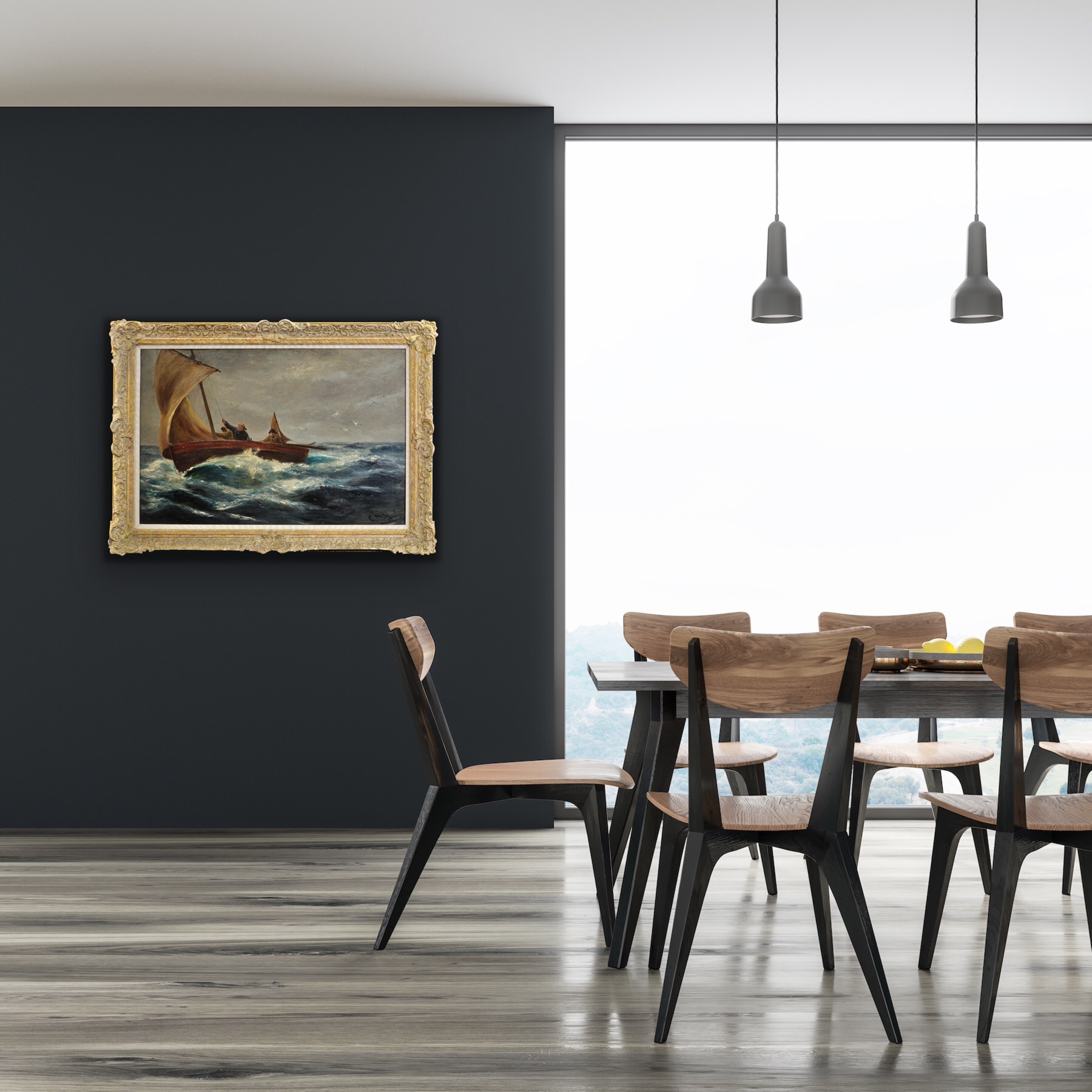 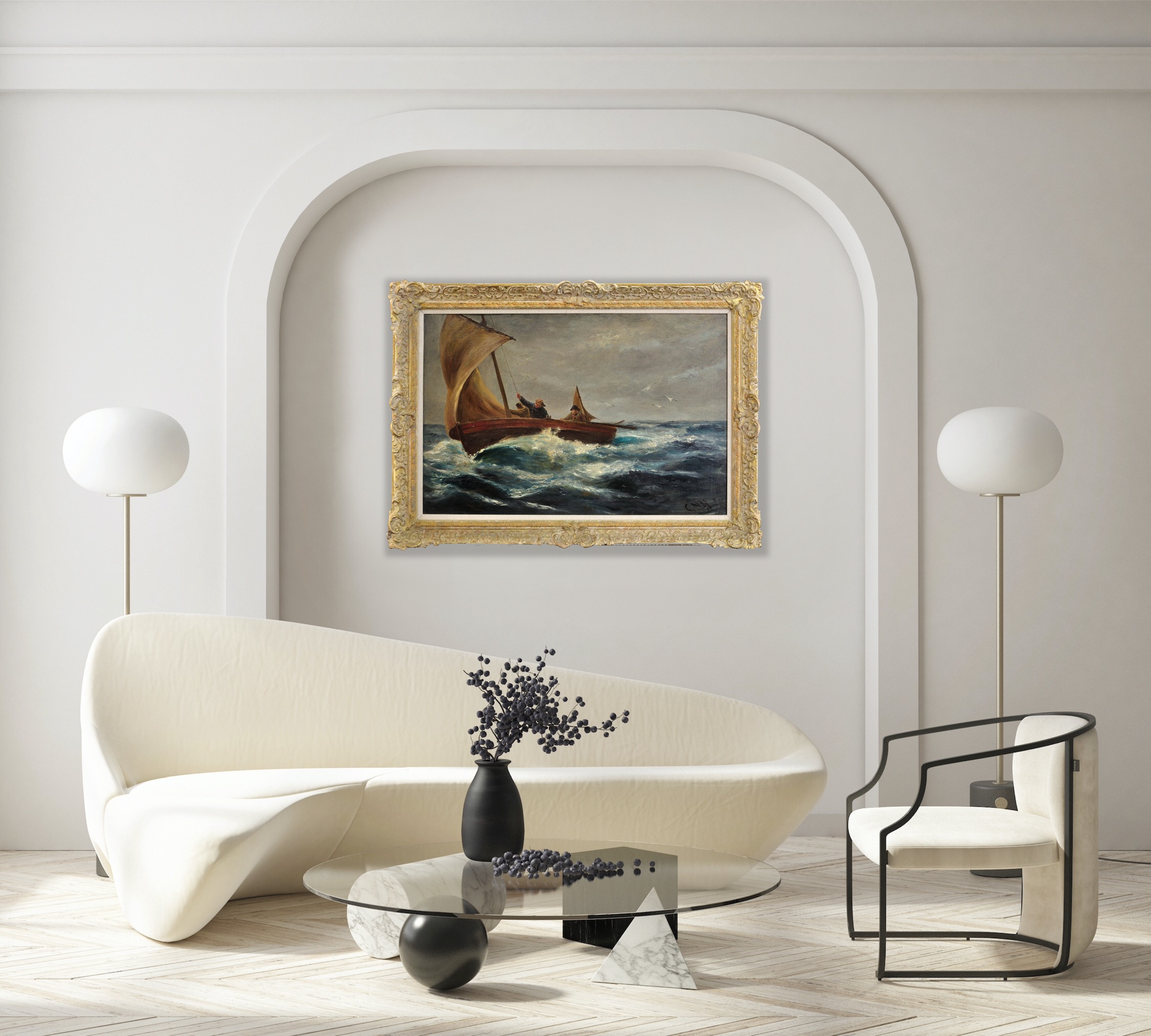 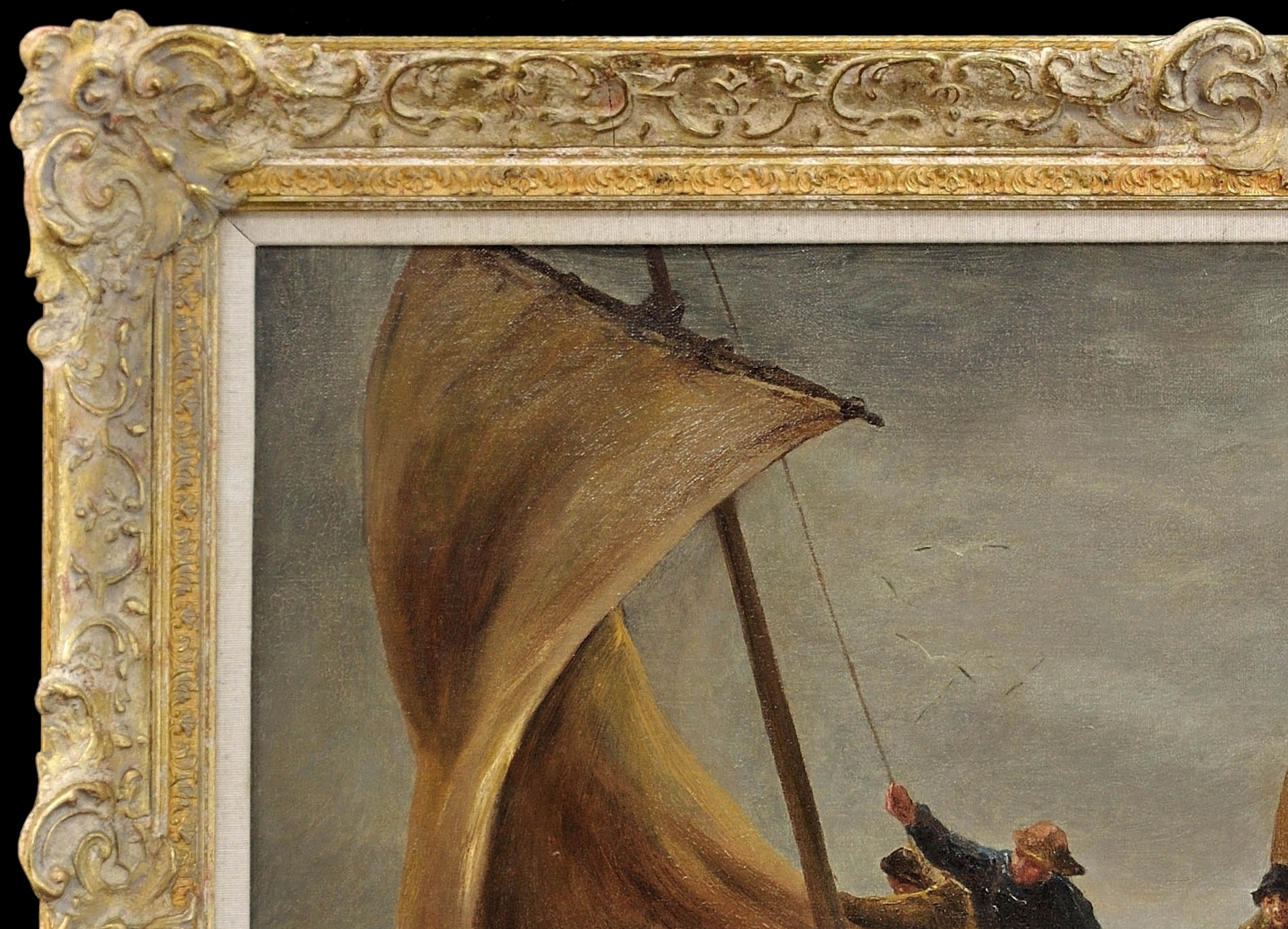 Available for sale from Big Sky Fine Art; this original oil painting by Charles Napier Hemy dated 1915.
The painting is presented and supplied in a sympathetic frame and mount dating from the 1960s or 1970s.
The painted surface and canvas have been restored and cleaned whilst in previous ownership. The canvas is lined. We are of the opinion that this work was performed in the 1960s or 1970s and correlates with the frame’s age.
Today, this antique painting is in good condition as a result of the previous work. It is supplied ready to hang and display.
The painting is signed and dated lower right.

Charles Napier Hemy, possibly the finest British marine artist of his generation, is known for his works in the Tate collections. He had a life that was particularly interesting, fulfilling and professionally successful.

He was born at Newcastle upon Tyne on 24 May 1841, the eldest son of a composer. His two younger brothers also became artists, although neither achieved the success of Charles.

In 1850 his parents had run into financial difficulties, so the Hemys emigrated to Australia, aboard a ship named the Madawaska. His mother gave birth to his youngest brother whilst on the journey. For Charles, then just a nine-year-old boy, this was an epic voyage and the return voyage in 1852 marked the start for him of a love affair with boats and the sea: He later wrote “It was imprinted on my mind and I never forgot it”. Whilst in Australia Charles’ father tired his hand at gold prospecting, assisted by young Charles, but the family found it the life very tough, especially with three young boys, and so they returned to England. The small amount of gold they had prospected however enabled them to settle their debts and resume a decent life.

Charles had a strong artistic interest, and at 13 he enrolled in Newcastle’s Government School of Design under the tutelage of William Bell Scott. During his teenage years Charles also worked briefly on the sea, with two stints sailing on merchant vessels.

Charles was a deeply spiritual man and a lifelong and devout Catholic. In the mid 1850s he decided to enter the priesthood and spent three years as a monk in a Dominican House, at Newcastle upon Tyne, and in a monastery in Lyons, France. He painted in his spare time, working on church decorations. This love of painting caused him to reconsider life as a priest and, rather than taking his final vows, he took up painting professionally. He went to Antwerp and studied under H Leys from 1867-1870, where he painted historical scenes. In 1870 he settled in London, where he was much influenced by Whistler. From 1870-80 he worked from a studio in Fulham and in the William Morris workshop, where he was greatly influenced by the Pre-Raphaelite movement. As Charles began to support himself as an artist, he changed his name to Charles Napier Hemy, choosing the additional name because his mother was an admirer of her cousin Sir Charles Napier.

Charles married Mary Ann Lloyd in 1866, but she sadly died in 1880, without children. For many years Charles had spent summers in Cornwall and later in 1880 he settled in Falmouth, where he was to spend the rest of his life devoted to marine painting. He later remarried, a local Falmouth girl, Amy Freeman and they went on to have ten children. He built his home, Churchfield, to his own design and specification and his commercial success as a major artist enabled him to provide a very comfortable lifestyle for his large family.

Charles was an ardent yachtsman and fitted out his own yacht, the Vanderveld, as a studio. Writing to a friend he explained “I have built my house here (Falmouth) so as to paint nothing but sea and ships and do them always from nature. It is sad not to be in London, but I think Falmouth is better than Venice”. He would follow other boats out to sea in his yacht and made sketches of them, then complete the work from Churchfield. His paintings from this period show a broad, swirling style, reflecting his intimate knowledge and love of the sea. In Falmouth Hemy became mentor to Sir Frank Brangwyn and the renowned marine painter, Montague Dawson. He was also a close friend of Henry Scott Tuke, who had helped found the Newlyn School. Hemy was therefore very much part of the prospering Cornish art scene of the time, being regarded as one of its elder statesmen.

Hemy continued to paint and sail right up until his death at Falmouth on 30 September 1917. He is buried in the Dissenters’ plot in Falmouth Cemetery in the Dominican monk’s habit that he had kept from his early 20s and not far from his friend Henry Scott Tuke. An exhibition of his work, with a catalogue, was held at the Laing Art Gallery, Newcastle-upon-Tyne, in 1984.

There are many examples of his work in public collections, including the Walker Art Gallery, Liverpool, the Tate, London, the Laing Art Gallery, Newcastle upon Tyne, the Greenwich Art Gallery and the National Gallery of New South Wales, Sydney.

This magnificent original oil on canvas painting by Charles Napier Hemy is called ‘Making the Run for Home’ and is signed and dated to the lower right. It depicts a small wooden sailing vessel with a full sail on its single mast, a smaller sail on the stern, skimming over the waves as it makes its way home. We view the port side of the vessel as if from the water, the bow to the left, with the vessel travelling towards us. The three male figures on board wear oilskins and sou’westers, the traditional clothing of local fishermen. There are four seagulls following the boat. The weather is blustery but fine; the sky above has light cloud. The sea, sparking in shades of blue and aquamarine is lively with bright splashes of spray. This painting demonstrates Hemy’s mastery of his subject and ability to convey the feeling of the wind and sea. 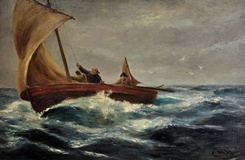