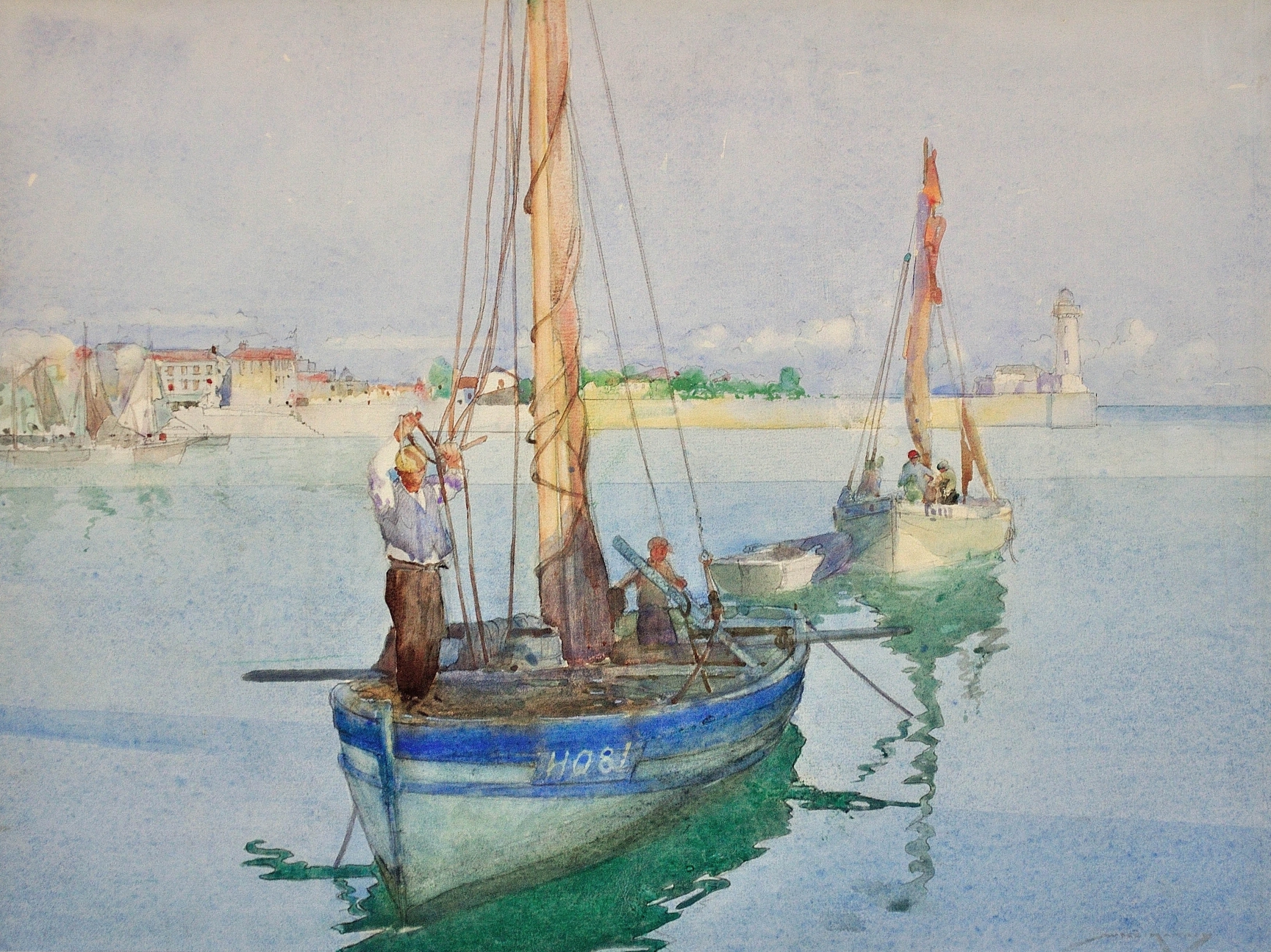 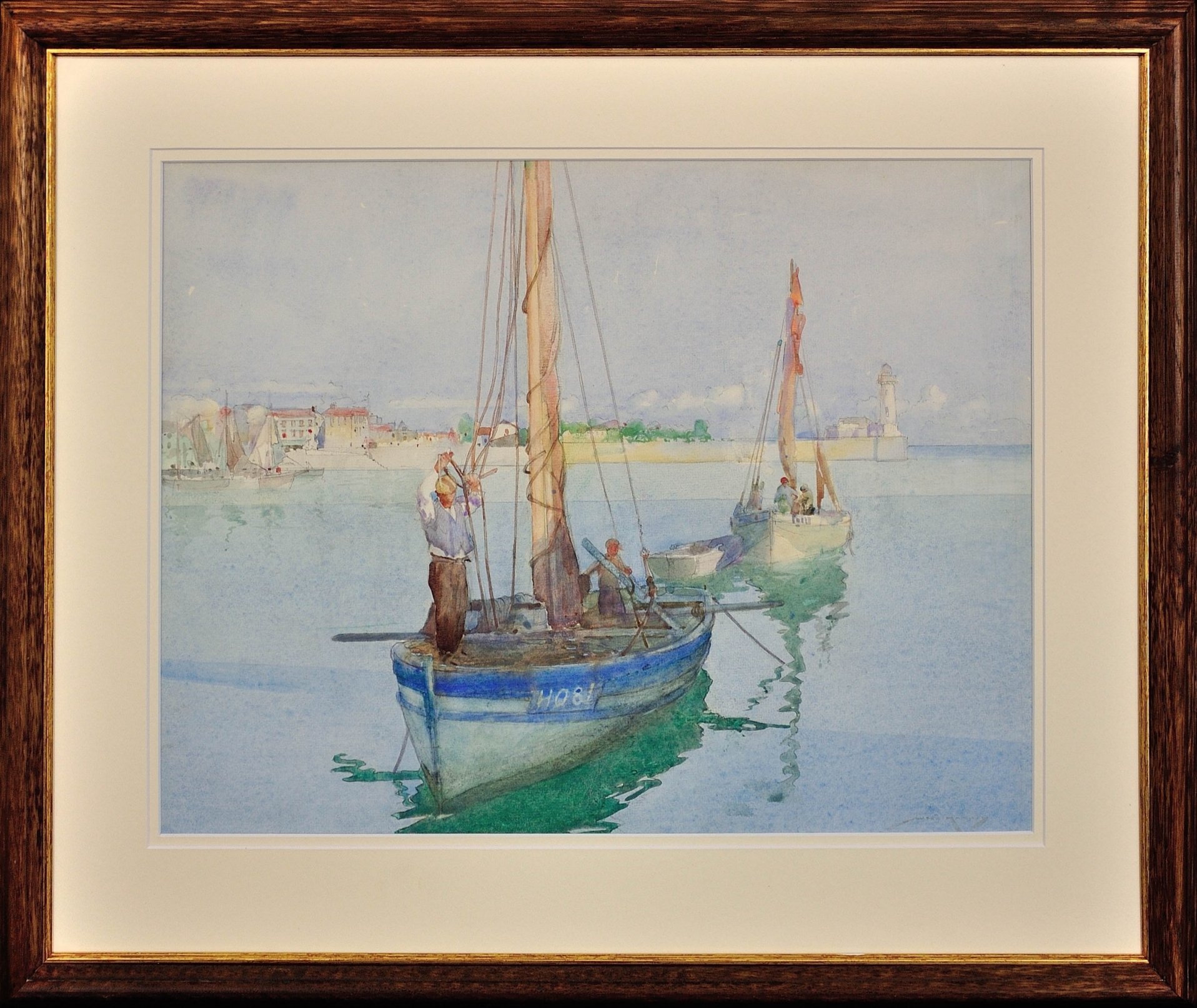 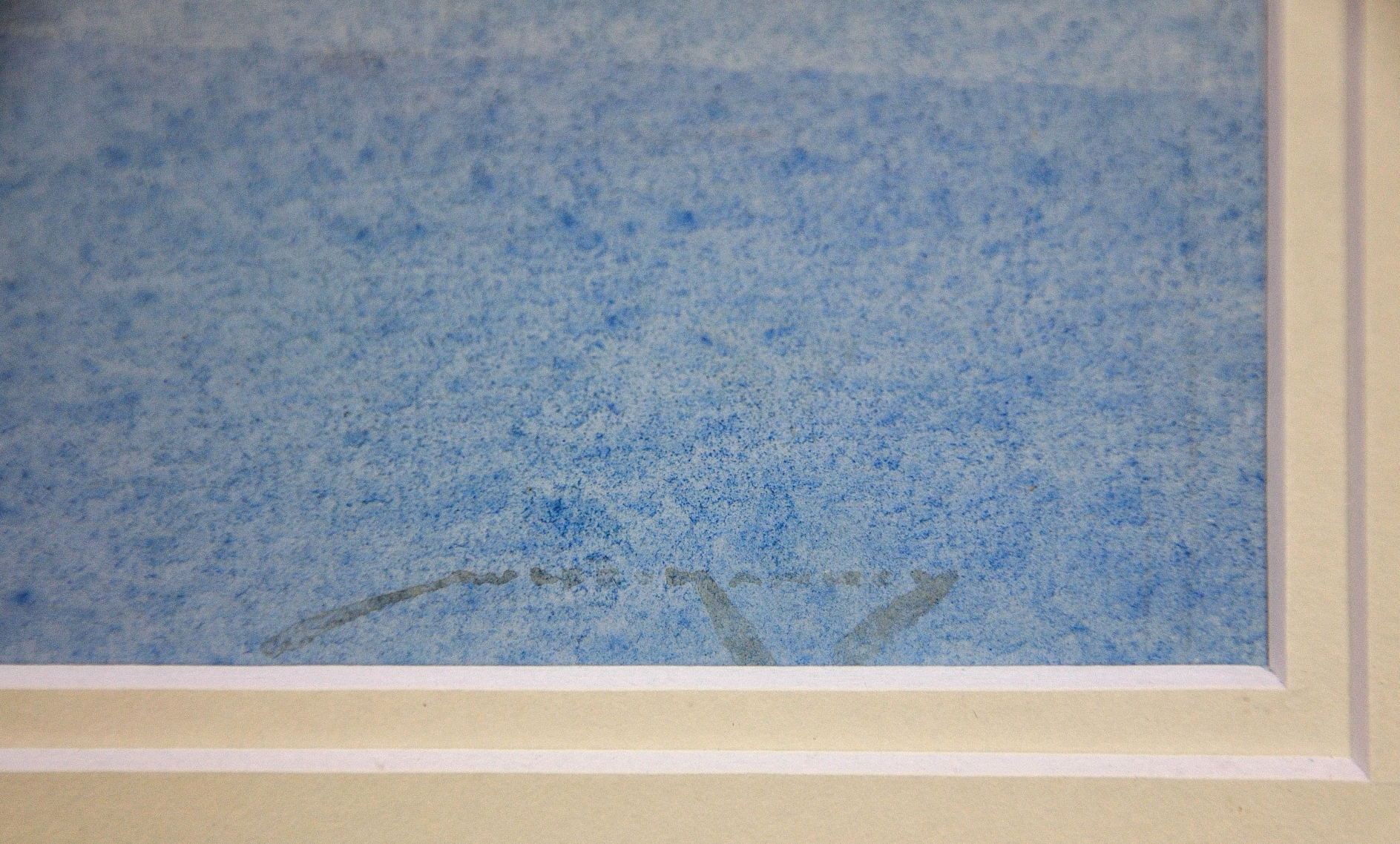 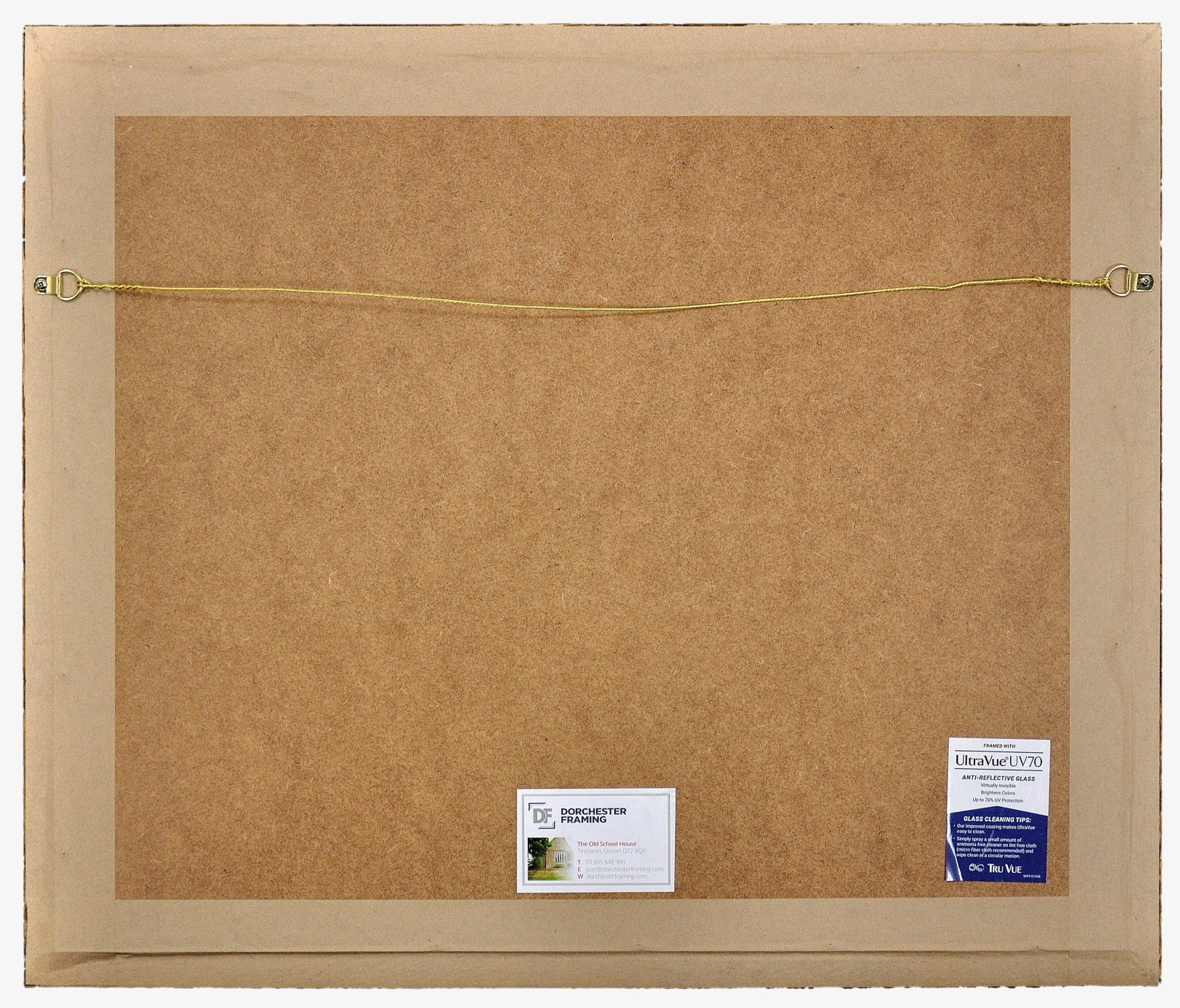 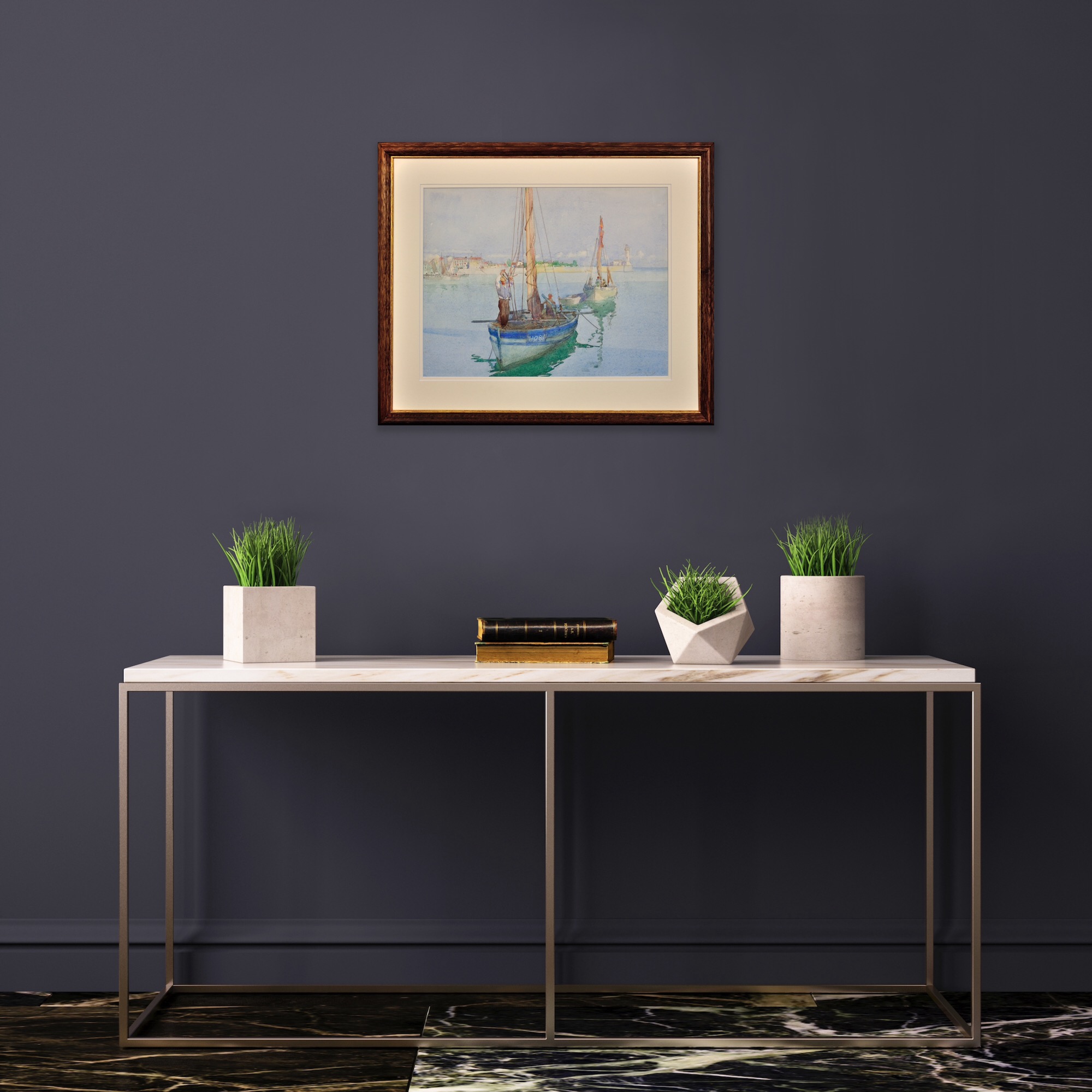 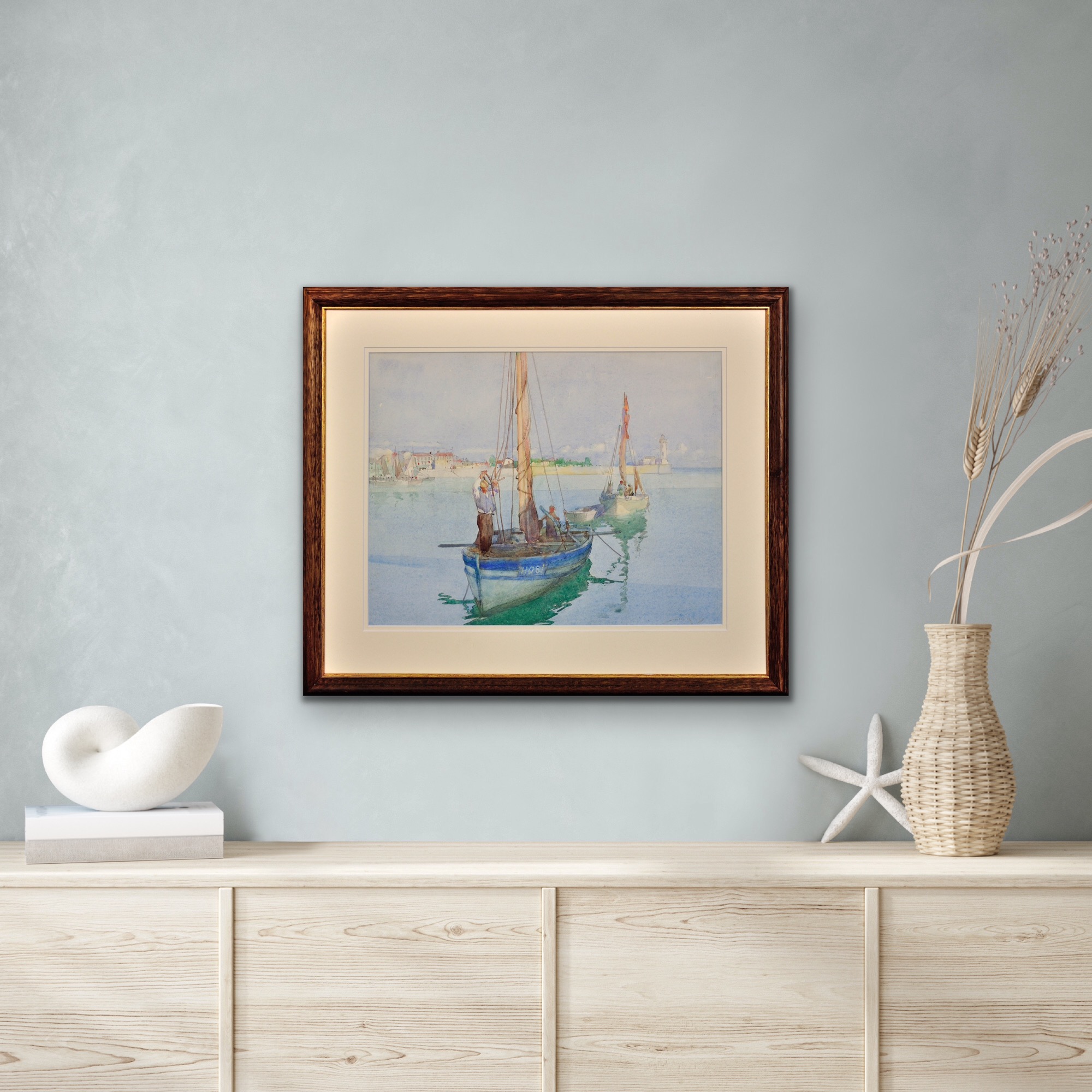 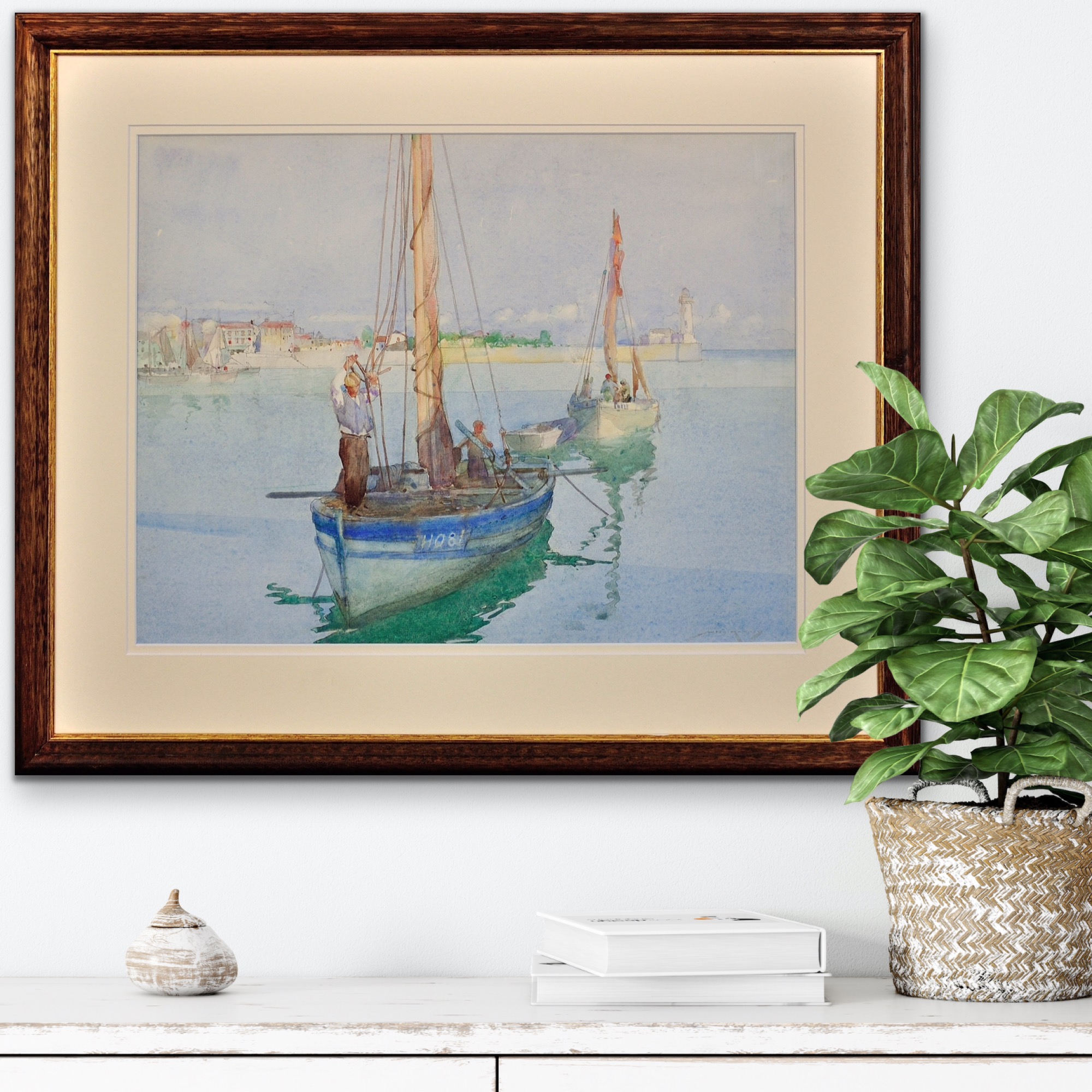 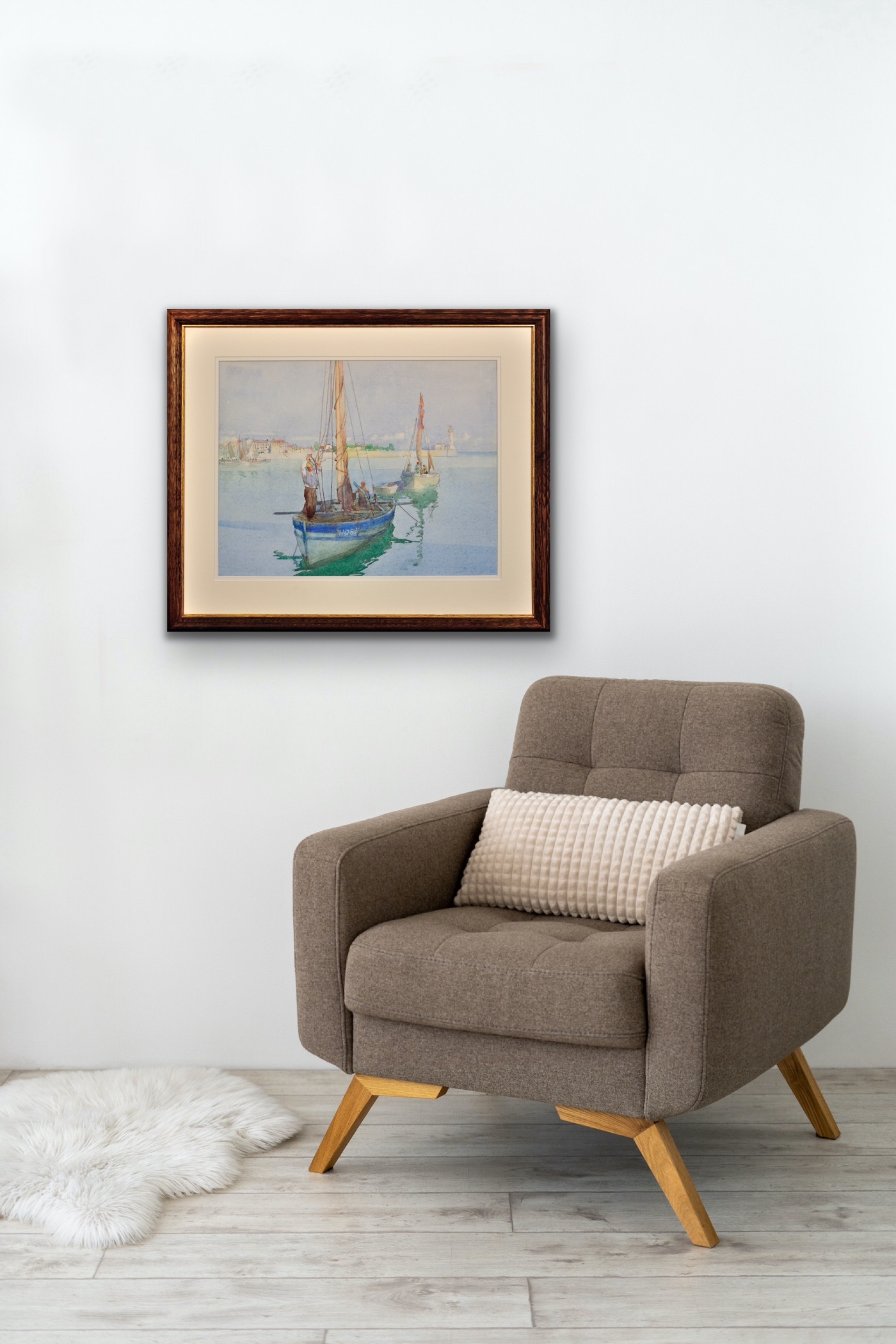 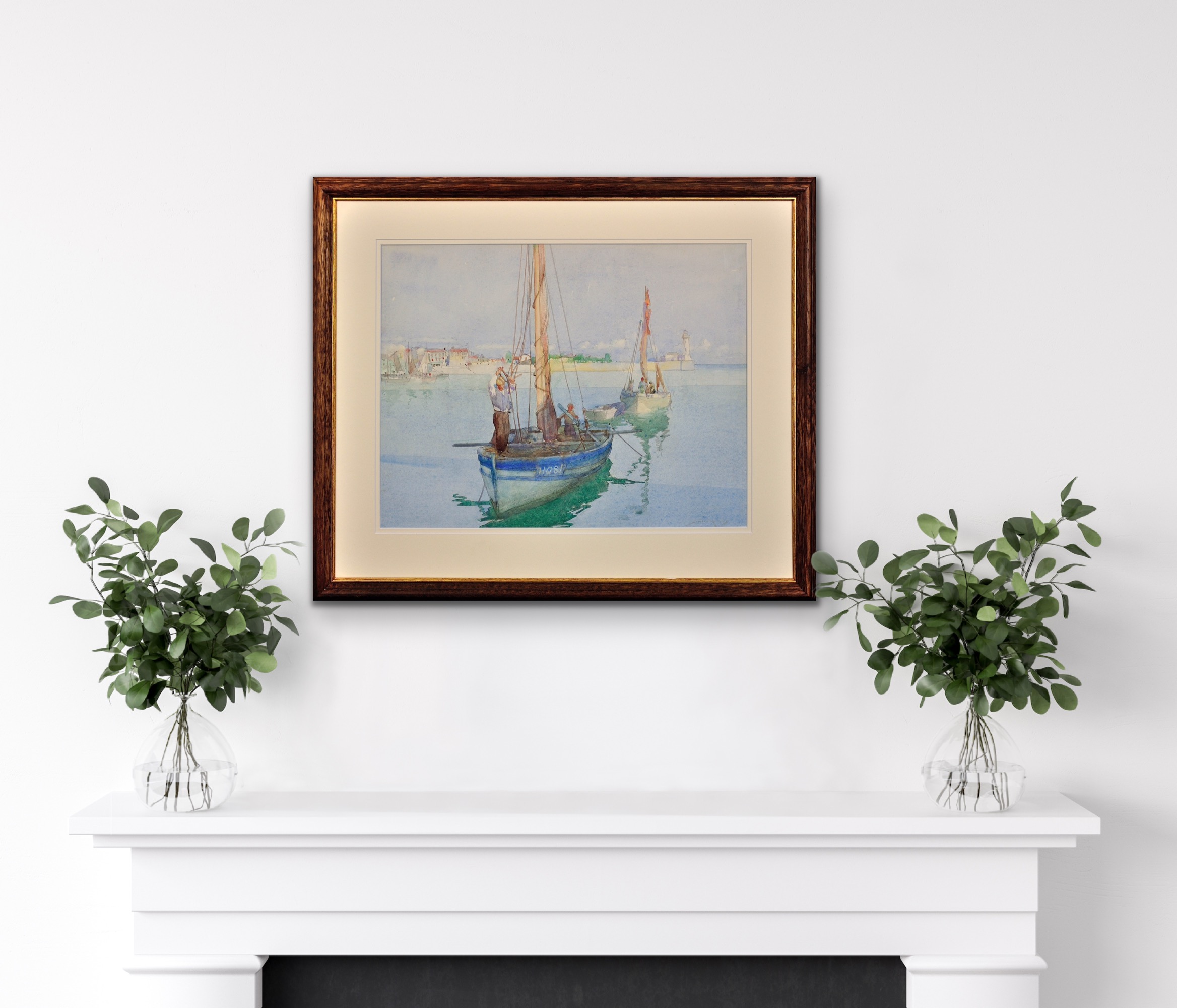 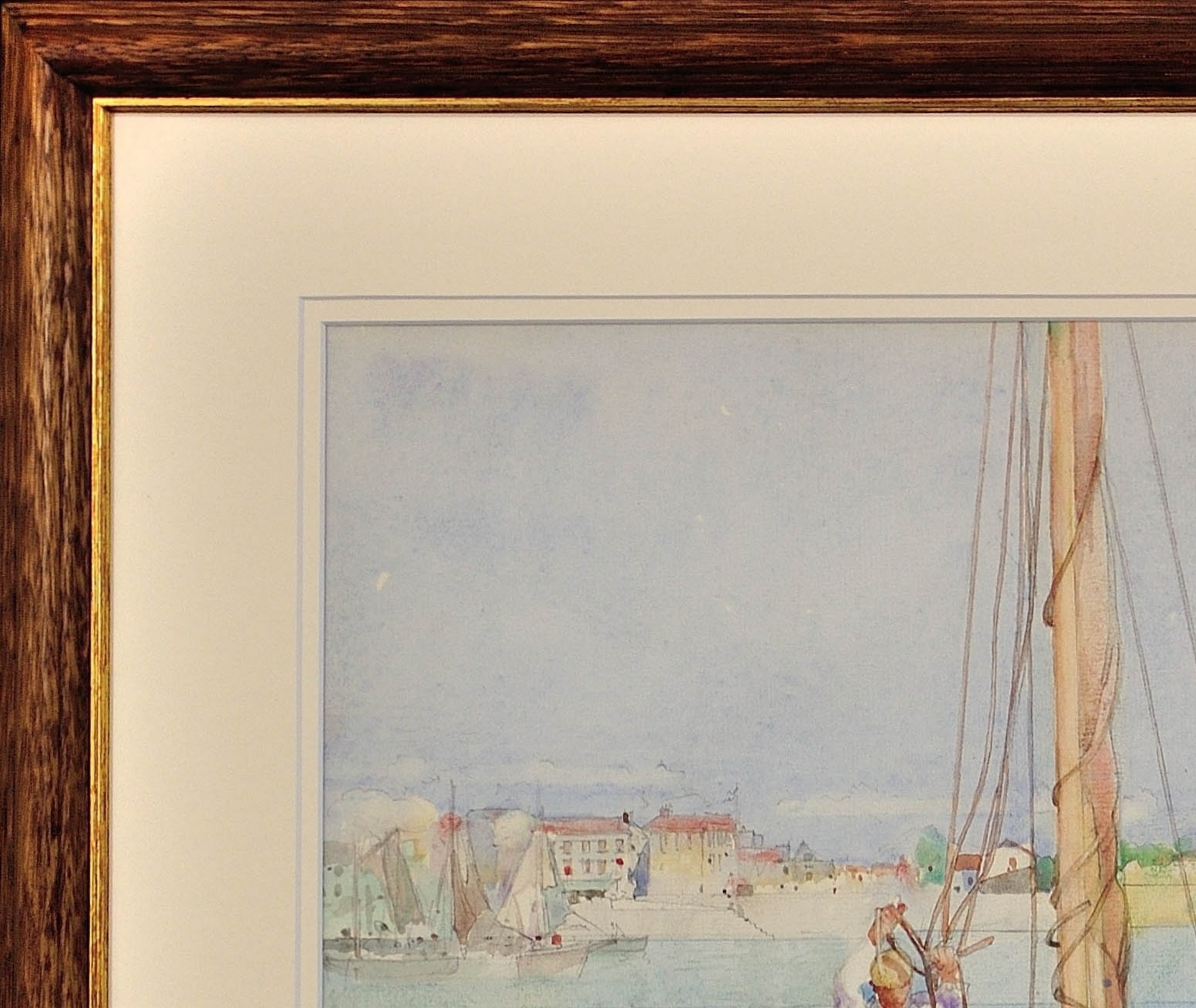 Available for sale from Big Sky Fine Art; this original painting by William Lee Hankey dating from around 1910.
The watercolor is presented and supplied in a sympathetic and contrasting new replacement frame to contrast the scene colouration (which is shown in these photographs) and behind non-reflective Tru Vue UltraVue® UV70 glass.
This antique piece is in good condition. It wants for nothing and is supplied ready to hang and display.
The watercolour is signed lower right.

William Lee Hankey was a British painter, etcher and book illustrator. He specialised in landscapes, harbour scenes, character studies and portraits of pastoral life. He belonged to the Newlyn School of artists, who were interested in capturing local villagers and their rustic surroundings and was influenced by the Romantic poets such as Wordsworth and Keats.

He was born in Chester on 28th March 1869 and educated at King Edward’s School, Chester. After leaving school he worked as a designer and studied art in the evenings at the Chester School of Art under Walter Schroeder, then at the Royal College of Art.

In the early 1900s he travelled to France, where he studied the works of leading European artists, including Jules Bastien-Lepage. His own style developed and he painted the people and landscapes of Normandy and Brittany. He wanted to capture the unspoilt peasant lifestyle, which he felt was already disappearing in England. From 1904 until well after World War I he maintained a studio at the Etaples art colony.

Hankey witnessed the German invasion of France and Belgium in 1914, after which his work began to focus on the French refugees whose lives were rarely depicted in artistic circles. In addition to his painting he had developed a reputation as one of the very best etchers of his generation, and his stylistic presentation of “The Refugees” was his contribution to raising awareness of the consequences of the German invasion for ordinary people.

He returned to England and enlisted as a volunteer with the Artist’s Rifles, with whom he served from 1915 -1918. He saw active service in Flanders in 1915. He was married to Mabel Lee Hankey and later to Edith Garner.

Hankey exhibited from the early 1890s in all the major London galleries, including the Royal Academy in London, the Old Watercolour Society, the New Watercolour Society and the Royal Institute of Painters in Oil Colours. He was President of the London Sketch Club from 1902 to 1904. From 1906-7 he exhibited at the New Zealand International Exhibition. He won many medals, including gold medal at the Barcelona International Exhibition and a bronze medal in Chicago. In 1936 he became a member of the Royal Society of Painters in Watercolours and was elected president in 1947. He was also chairman of the Empire Art Council. He died in London on 10.2.1952.

Today his works are represented in collections in England such as the British Museum and the Victoria &Albert as well as provincial galleries, and galleries abroad such as Budapest and Vienna.

Artist and writer A.L Baldry wrote of Hankey in a 1906 publication, The Studio, that “He is in his watercolours an absolute purist; he paints entirely with transparent pigments, and never has recourse to opaque colours; his brushwork is broad and confident – free, on the one hand, from affectation of showy cleverness, and, on the other, from niggling minuteness or overelaboration; and he does not insist, as is the fashion with many present-day painters, upon lowness of tone.”

This beautiful original watercolour by William Lee Hankey depicts small fishing vessels off the coast of Lower Normandy in France. It features two fishing boats; the one in the foreground bears the number HO81, HO being the abbreviation for a vessel registered to Honfleur. The boat is painted with a pale blue trim and has one large mast. There is no sail visible, but there are oars on board, suggesting that it has been rowed, due to the obvious lack of wind. The two men on board are carrying out minor repairs to the ropes and other equipment. The second vessel, just to the rear, has pale reddish-brown sails, which hanging straight down. There are two people on board, and a small rowing boat is tied alongside.

In the background we see the harbour of Honfleur, which is a charming little 17th century harbour in Calvados, with has many historic and preserved buildings, even today. There is a white lighthouse at the entrance of the harbour.

The palette used by the artist is one of muted pale colours, creating an overall impression of immense tranquillity and stillness. The artist has perfectly captured the light, reflected between the calm sea and the expansive sky. This is a delightful and very uplifting piece. 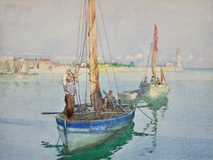