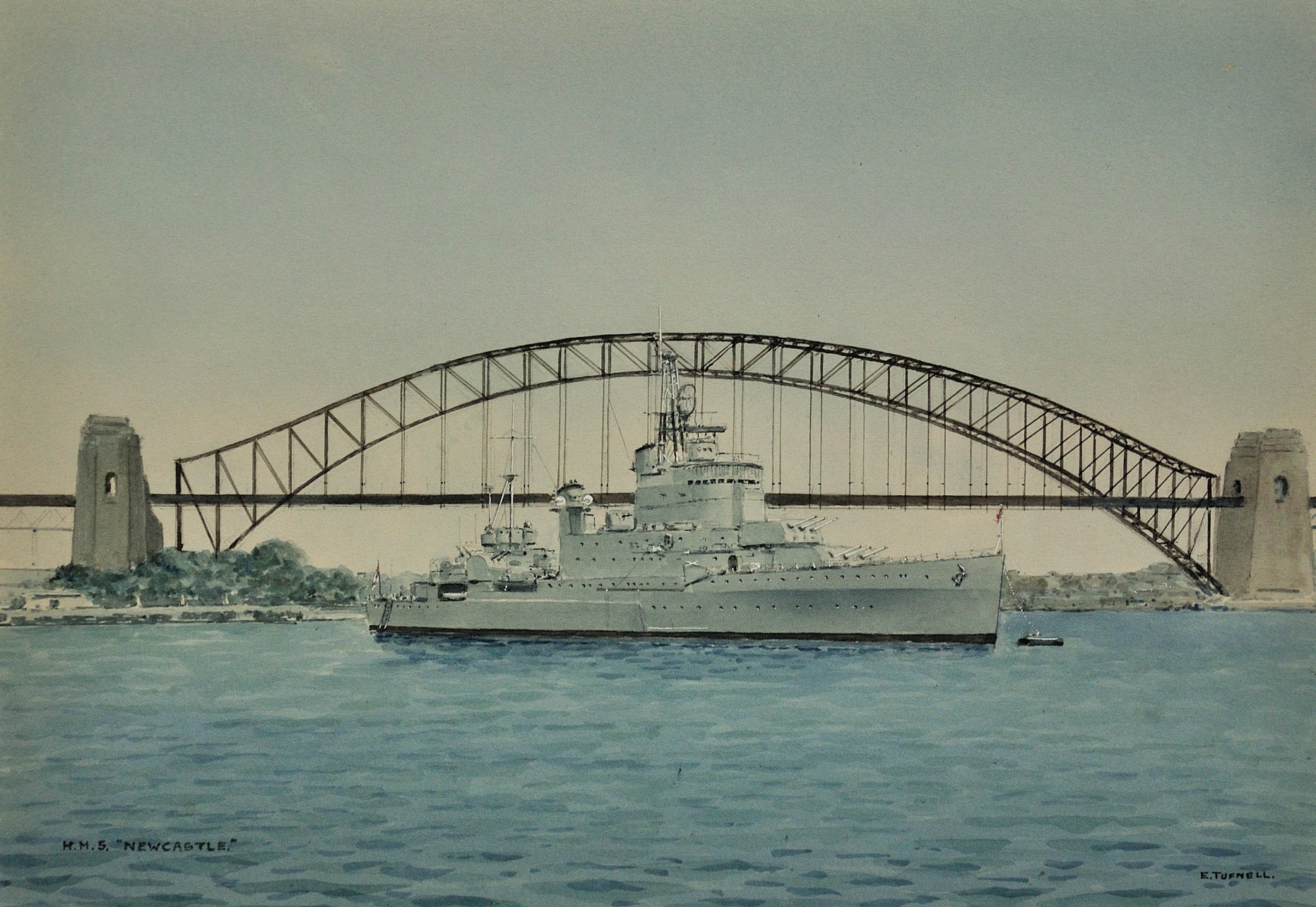 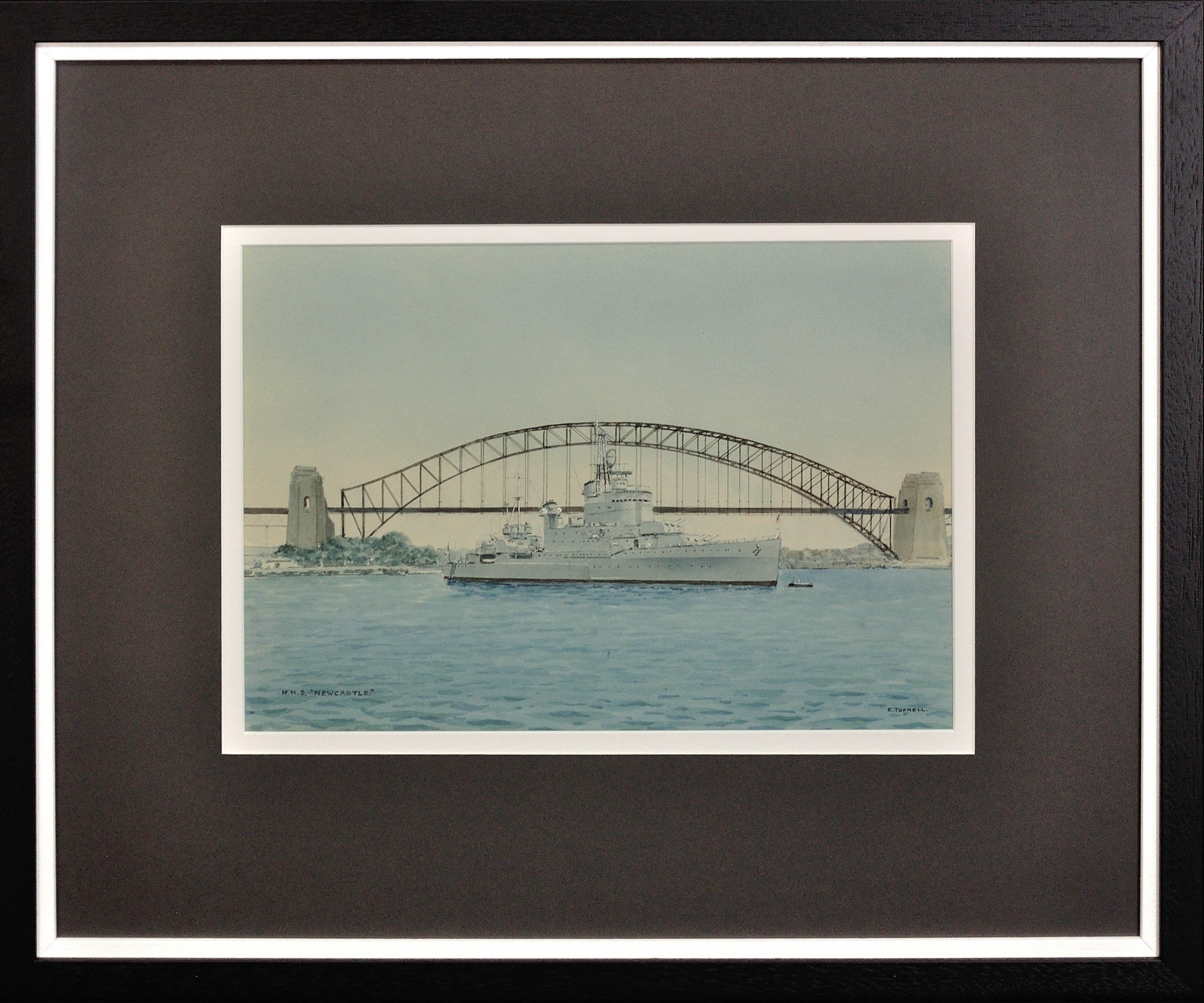 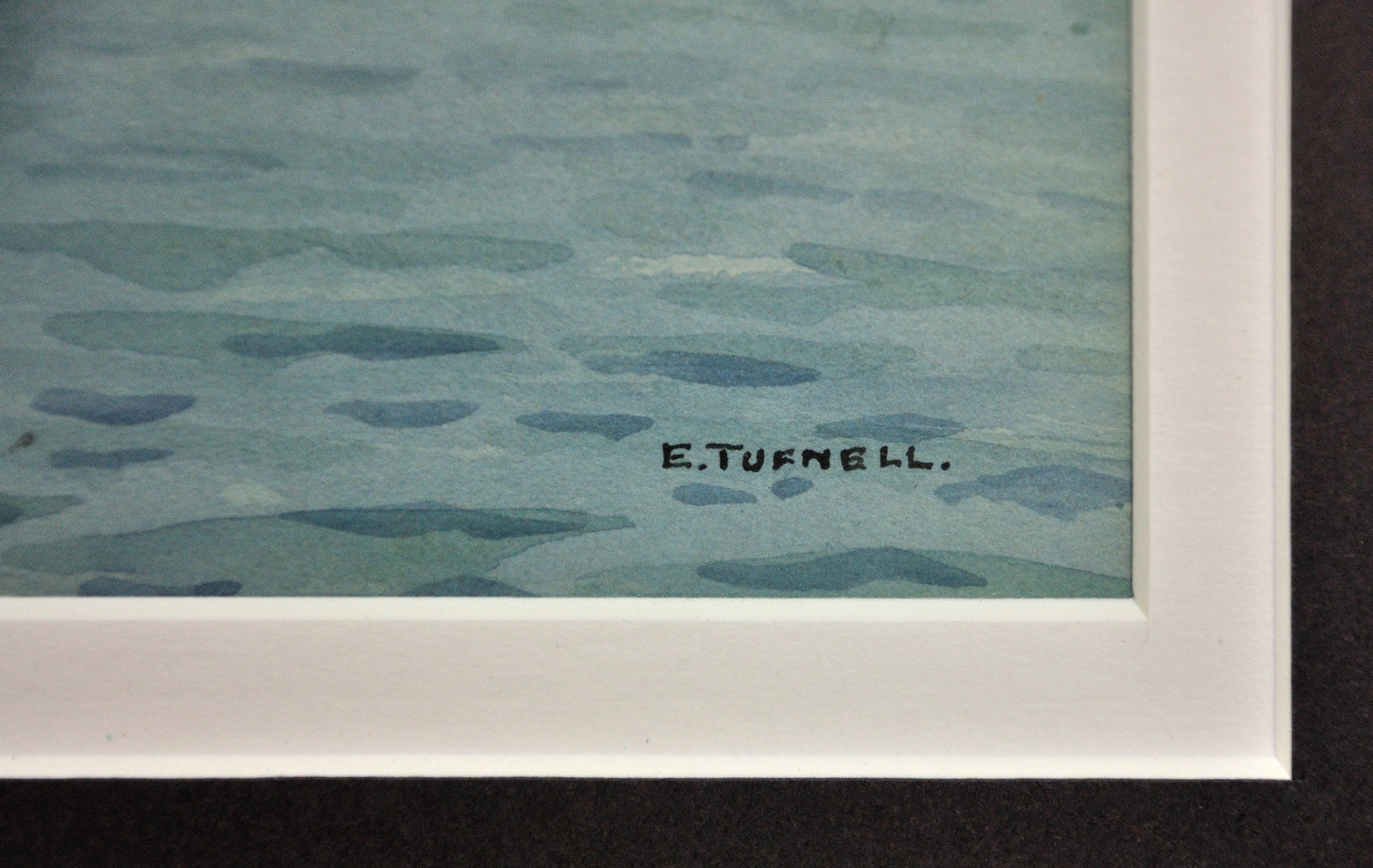 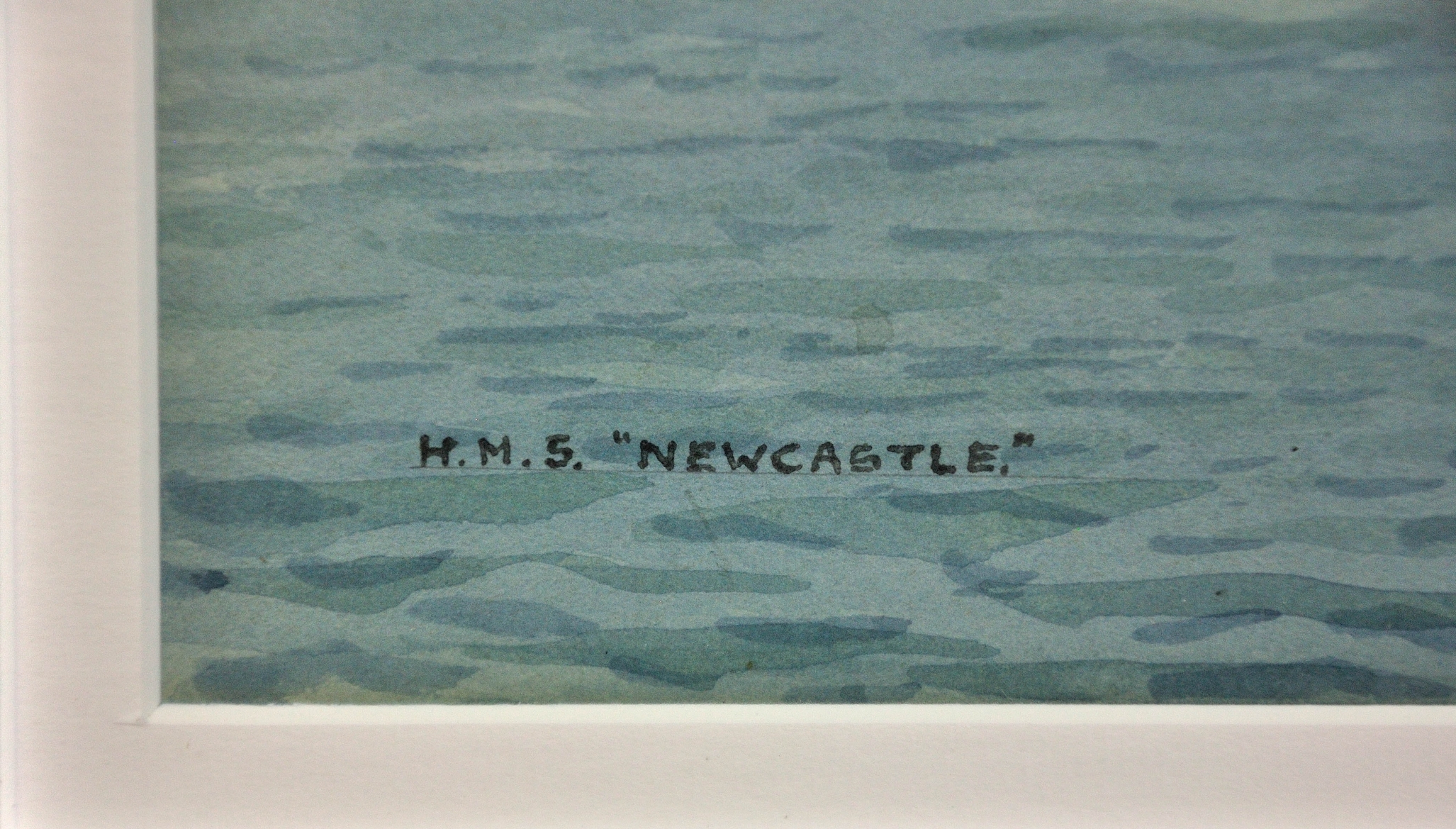 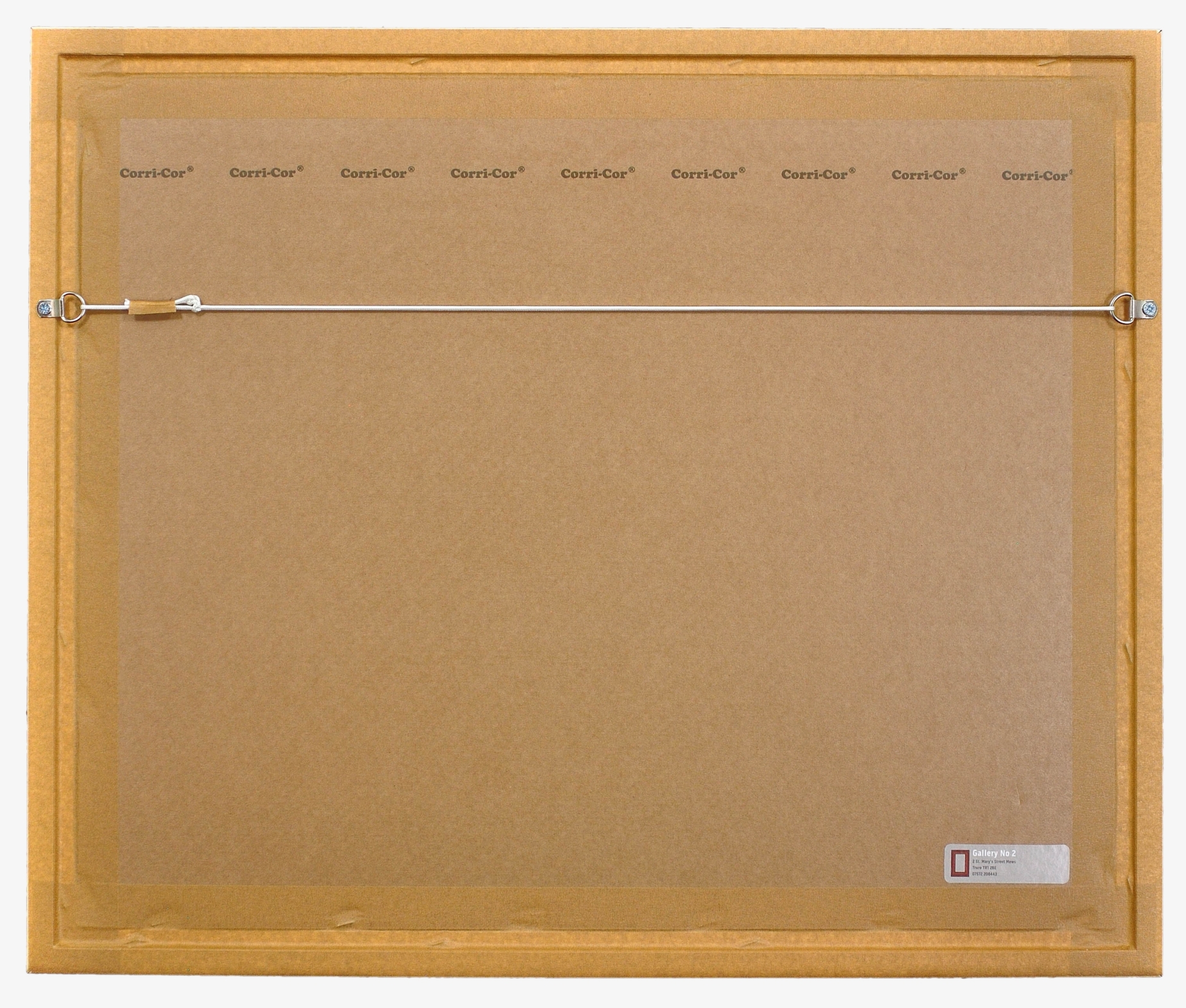 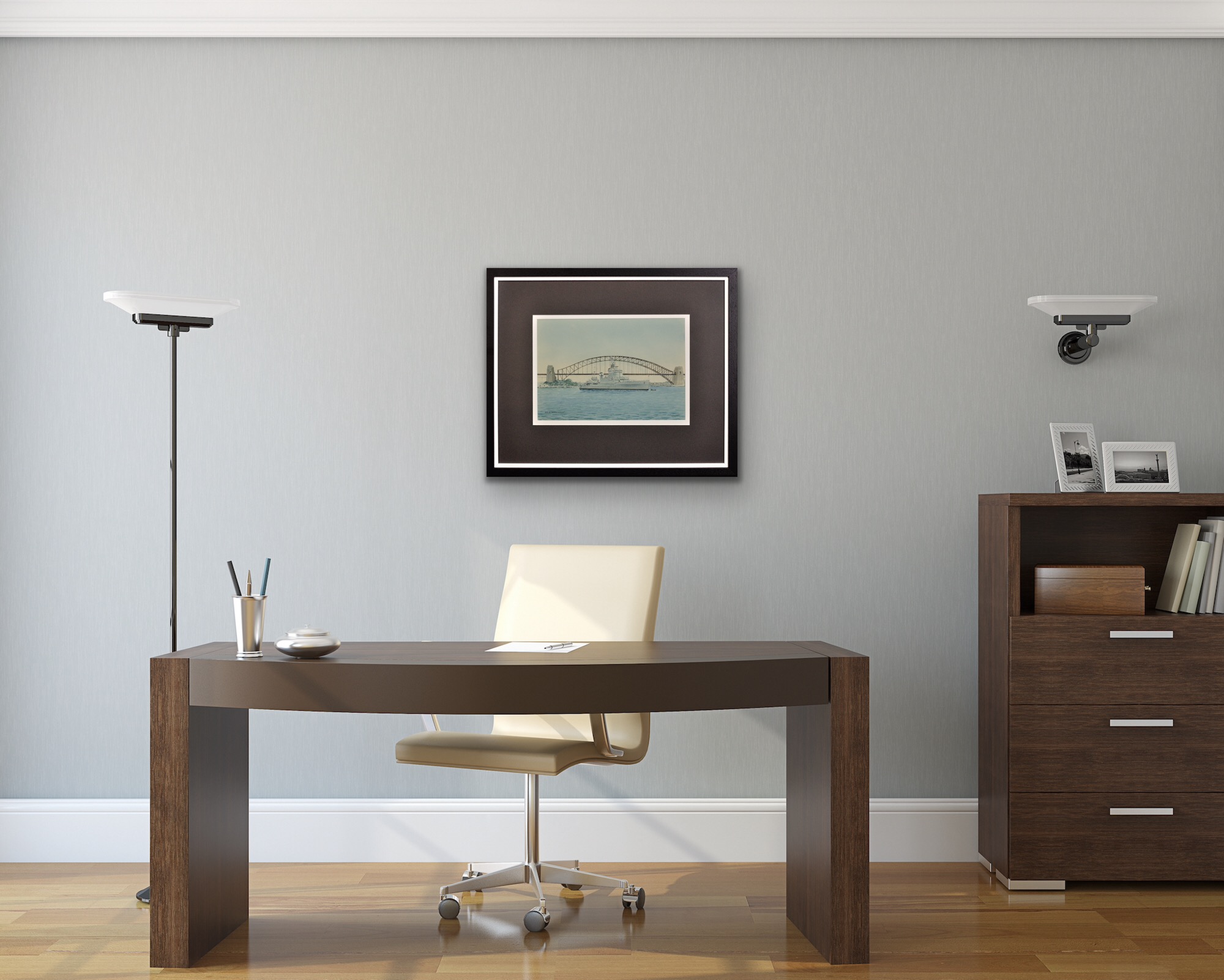 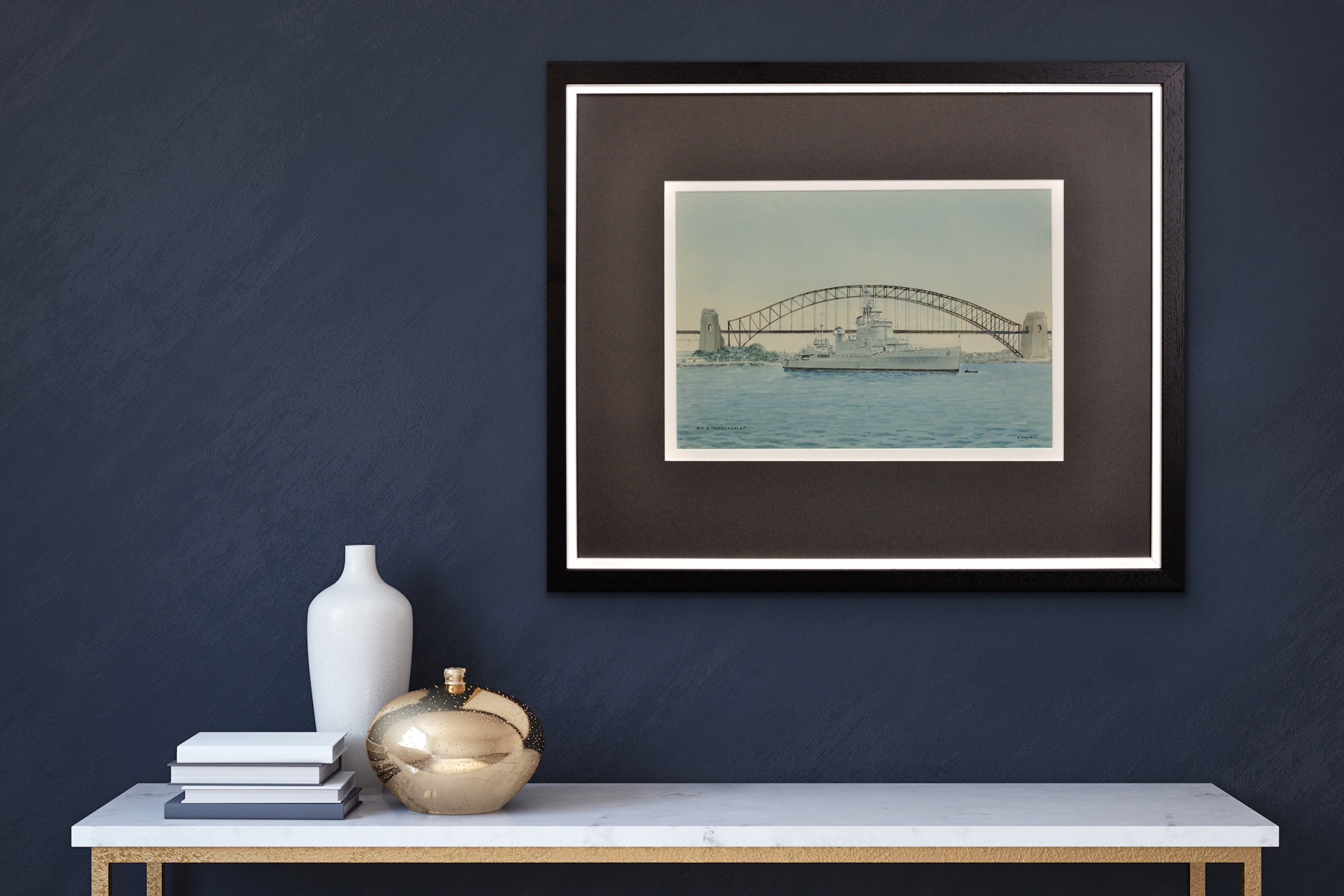 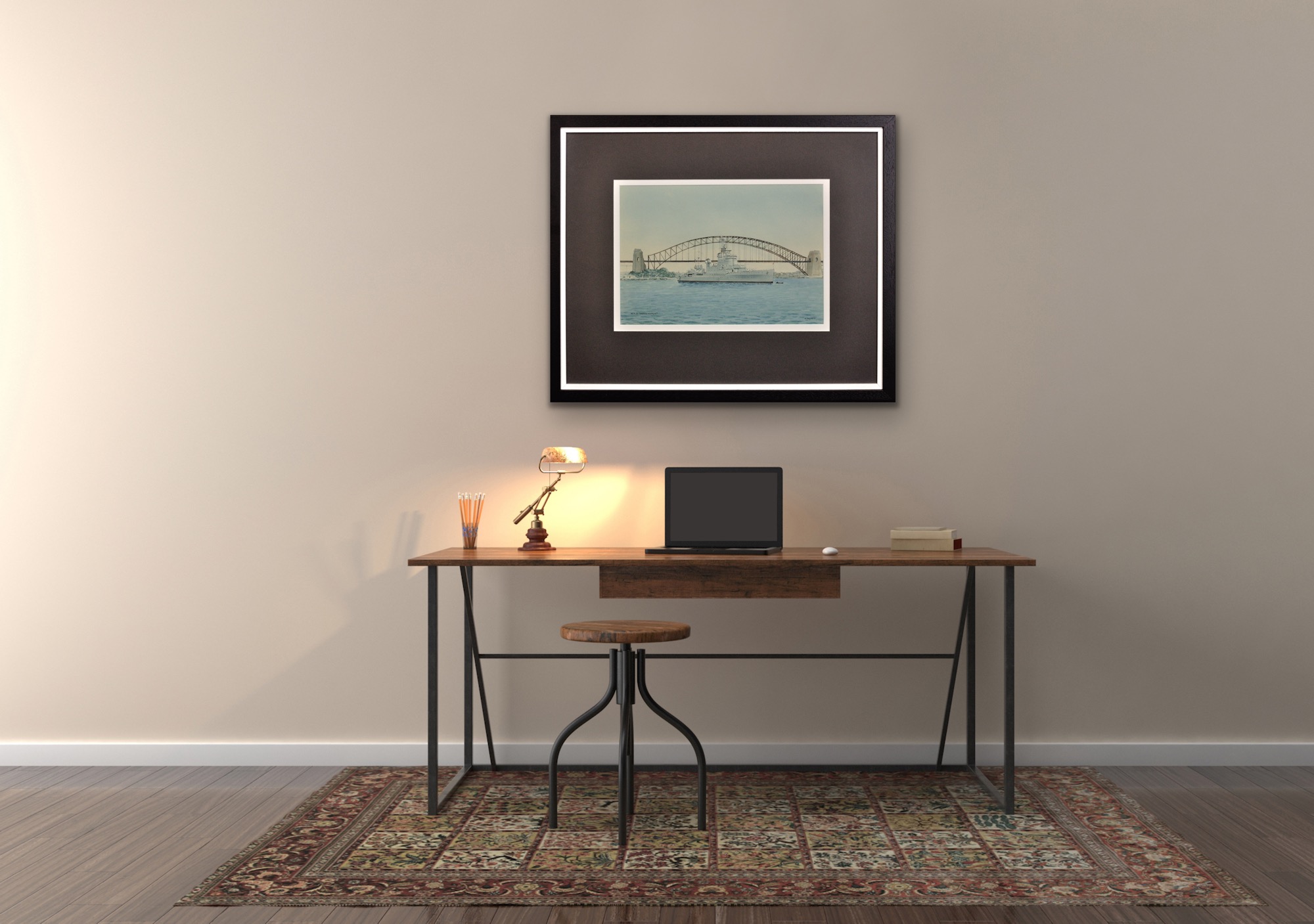 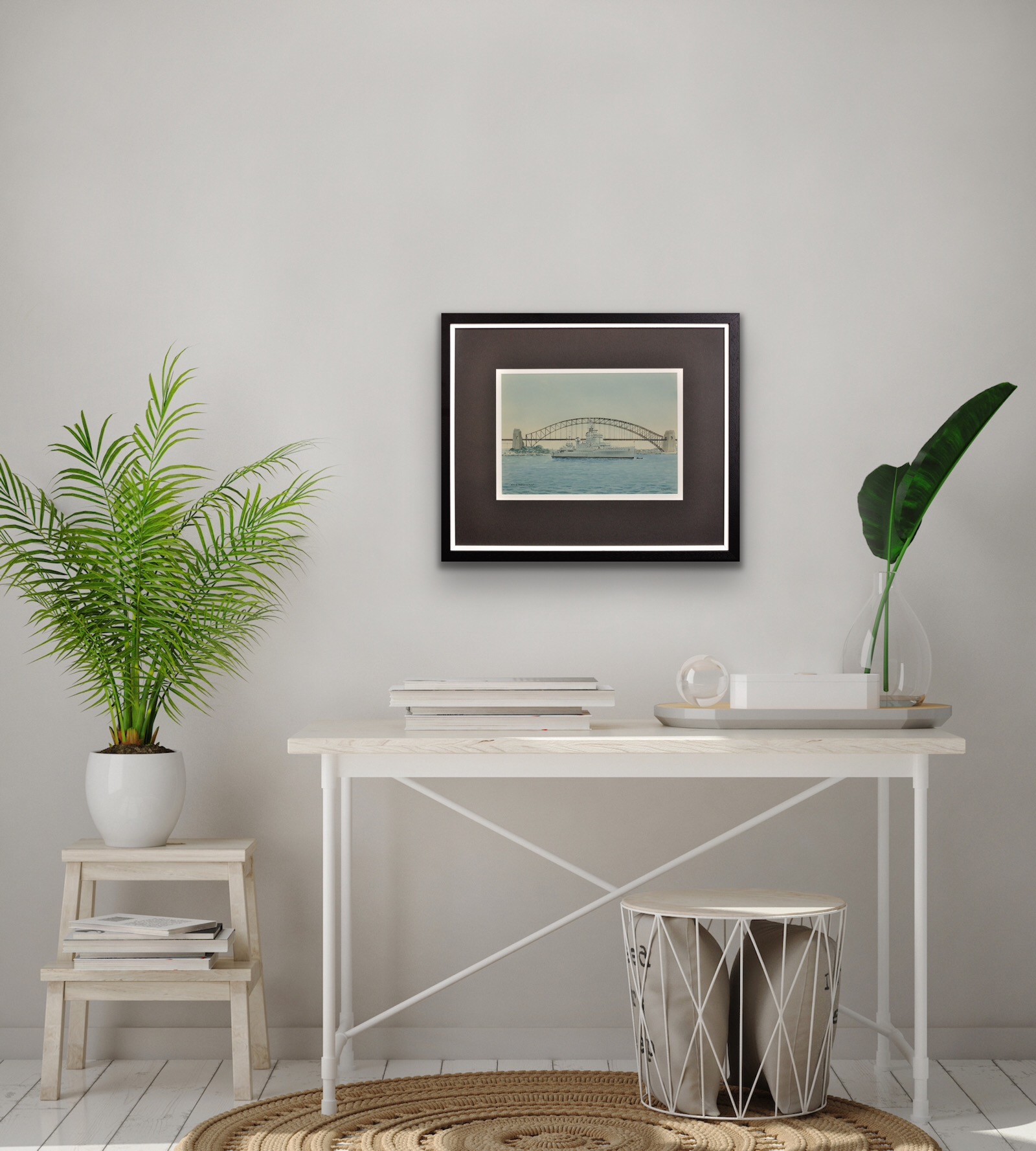 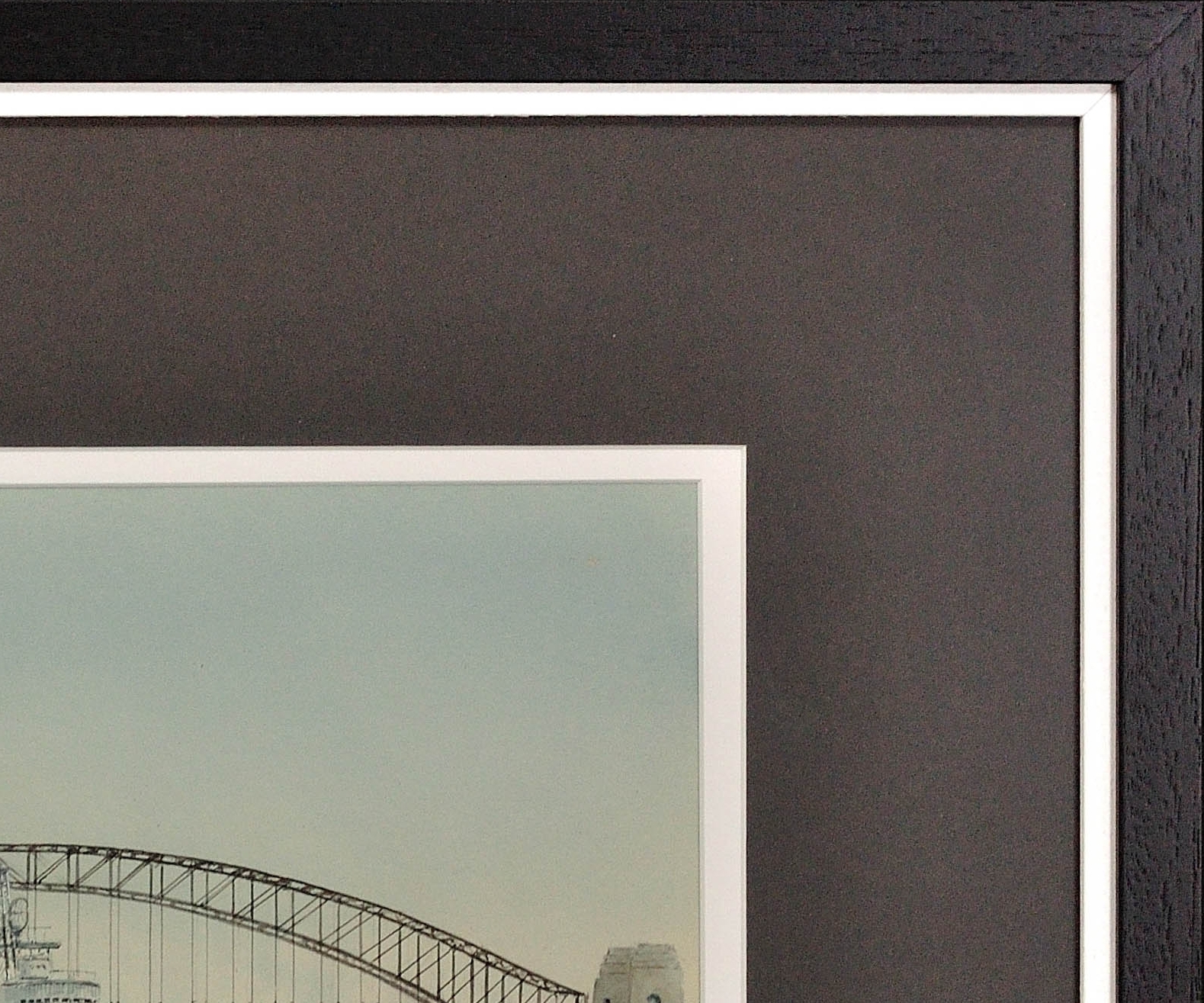 Available for sale from Big Sky Fine Art is this original painting by Commander Eric Erskine Campbell Tufnell RN dating from 1956.
The painting is presented and supplied in a sympathetic and contrasting contemporary frame to suit the subject colouration (which is shown in these photographs) , and behind premium anti-reflective glass with UV Protection greater than 70% (Artglass AR 70™).
This vintage watercolour is in superb condition. It wants for nothing and is supplied ready to hang and display.
The painting is signed lower right and titled lower left.

He was born on 9th September 1888 at Bangalore in India, to a prestigious military family. The family returned to England whilst Eric was a child and he became a boarder at Devonshire House school in East Sussex. At just 14 years old he joined HMS Britannia as a cadet and went to sea as a midshipman on the battleship HMS Albion in 1904. All midshipmen were required to keep a logbook, and it is interesting that the ones Tufnell kept between 1904-7, now in the Surrey County Archives, are enlivened by drawings, maps and sketches of life aboard ship. His early artistic talent was never formally trained, but he took the opportunity to develop this skill wherever he could.

Tufnell then served on the HMS Tamar and HMS Sutlej, where he sketched the passing Russian Fleet and sold his sketch to a newspaper; the first money he had earned from his passion for drawing. He went on to serve on the HMS Montagu, which was scuppered on rocks, then HMS Ocean, HMS Hannibal and HMS Hogue. He became an acting Sub Lieutenant and was posted to HMS Euryalus, where he was part of a rescue mission following a terrible earthquake at Messina.

Overall, he made a solid start to his naval career, but seems to have lacked enthusiasm for large ships, which no doubt led to his next set of postings on submarines from 1909-1917. He started with HMS C7, where he became Lieutenant, then became Commander of HMS A8. This was one of the first British designed submarines, which unfortunately ultimately sank. In 1913 Tufnell took passage to Gibraltar to take command of B8 working from the submarine depot ship HMS Rapid. The following year he married his first wife, Sigrid Dagmar, with whom he later had three children.

In 1915 Tufnell was transferred to HMS Adamant as part of the 8th Submarine Flotilla at Mudros for special duties. He was obviously gaining a reputation as an artist because during this period he was commissioned to paint all four Royal Navy ships maned Adamant, possibly by former officers who served on the submarine depot ship or its submarines.

In 1916 Tufnell was appointed CO of D4 which had HMS Vulcan as its depot ship on the Firth of Forth and was part of the 3rd Submarine Flotilla. He also became an Italian interpreter and was made a Cavalier of the Italian Order of St Maurice and Lazarus. This was followed by two other swift moves, an accusation of inefficiency and being relieved of his command. He was discharged to general service in 1917. This however was not the end of his naval career, and he went on to work in anti-submarine work, countering the threat of enemy submarines, until 1919. He also commanded several small ships in the Eastern Mediterranean as part of a fleet of British warships assisting the White Russian army in their fight against the Red Russians, the Bolsheviks, for which he was awarded a Russian military honour.

In 1919 Tufnell took command of HMS Tuberose, and later was put in charge of a draft to Hong Kong with HMS Caradoc. There was then another adverse report, after which he was relieved of his post once again. Although his career seemed to ‘mark time’ for a while after this, he worked as an interpreter and completed a course in Signals and Gunnery before working as an Observer. A year-long posting to the British Naval Mission in Greece was followed by honours from the Greek government. He went on the serve in the Fleet Air Arm from 1926, and then transferred to the RAF, where he was promoted to Commander again, before retiring at his own request in 1929.
With only a small military pension and three children, Tufnell turned to his talent as a marine artist to support his family. The Saville Row naval outfitters, Gieves and Hawkes, helped secure naval officers as customers. They commissioned him to paint meticulously accurate water colours of the ships on which they served, and the quality and accuracy of his work was superb.
This new civilian life did not last however, as when war seemed imminent in the autumn of 1938 Tufnell offered his service to the Royal Navy and the next chapter of his military career began.
He was posted to HMS President in London and sent on a meteorological training course, prior to a posting as an Observer on the staff of the Commander in Chief, East Indies Station in Colombo, Ceylon. Here he gave a series of talks for the Columbo Broadcasting Station about ships, and met a young nurse, Vera Clark, with whom he had a child.
In July 1942 Tufnell returned to Britain to take up an appointment as Executive Officer at HMS Minos, the shore base in Lowestoft responsible for Harbour Defence, followed by operations at HMS Myladon and then a posting to HMS President in London on the Staff of the Chief of Naval Information at the Ministry of Information with responsibility for publicity, a role which involved working with the press and radio. There Tufnell met LT Cdr Angus Mackenzie who commissioned him to paint four of the ships on which he had served. Tufnell remained at HMS President until he left the Royal Navy for the second time some months after the war ended.
In 1946 Tufnell divorced his first wife and married Vera, the young nurse he had met in Columbo, and they went on to have a second child. They set up home together at Farnham in Surrey where he was active in the local dramatic society. The couple had thirty-three years together before he died aged 91, with “Tuffy”, as he was known, painting well into his late eighties.

A few months before Tufnell’s death the Pacific island of Samoa issued a stamp featuring his painting of a three masted sailing ship, the Splendid.
During his lifetime Tufnell’s works were often shown at the Parker Gallery in London, and there was an extensive trade in his paintings of clippers and whaling ships to the United States. Today many of his works can be found in the Whaling Museum at Cold Spring Harbour, New York and the American Clipper Museum, as well as various other museums and archives in Britain and the United States.

This painting brings together both a legendary warship and a highly experienced Naval Officer, who between them saw a very significant amount of historic military activity in the mid-twentieth century.

This exquisite watercolour painting depicts the ship HMS Newcastle in Sydney Harbour in December 1956. It portrays a magnificent view of the entire starboard side of the ship in front of the iconic Sydney Harbour steel arch through bridge, nicknamed the “coat hanger”, which spans Sydney Harbour from the central business district to the North Shore.

The significance of this image is that HMS Newcastle had been part of a squadron attending the 1956 Melbourne Olympic Games. She was present in Sydney Harbour at this time because she was refuelling there before travelling back to Singapore.

The precision and detail on this painting makes it appear almost as a photograph, and it is clear that it has been created by an artist who has a thorough understanding of his subject. For Commander Tufnell, this work was a tribute to a ship that was practically a legend.

HMS Newcastle was constructed by Vickers Armstrong and John Brown & Company as part of the 1933 Construction Programme for the Royal Navy. She was launched in 1936 and commissioned in 1937. She joined the 2nd Cruiser Squadron, part of the Home Fleet and took part in the Coronation Fleet Review in 1937. Newcastle was under refit at the outbreak of the Second World War, then joined the 18th Cruiser Squadron, taking an active part in trade protection duties, enforcing the merchant blockade of Germany.

In 1940 Newcastle had another refit before detachment to Plymouth to guard against a potential German invasion, encountering German destroyers in the Channel. In 1940 Newcastle transported 200 RAF personnel and a cargo of aircraft spare parts to Malta, then took part in Operation Collar, escorting a convoy of merchant ships from Gibraltar to Malta and Egypt, then taking part in the Battle of Cape Spartivento. Newcastle then travelled to the South Atlantic to search for a German cruiser, remaining at sea 133 days, with 109 days out of sight of land, a record for Royal Navy warships during the Second World War. After a brief refit in South Africa Newcastle returned to commerce protection duties in the South Atlantic, captured a French merchant ship and scuttled a German blockade. In 1941 she was refitted again in Boston, United States, with further modification at Devonport dockyard in Britain, then left to join the Eastern Fleet, becoming the flagship of the 4th Cruiser Squadron.

In 1942 Newcastle was loaned to the Mediterranean Fleet to take part in Operation Vigorous, during which she was torpedoed, but claimed a share in shooting down four enemy aircraft. The damage from this encounter and subsequent damage from heavy seas was repaired at Aden, and later Brooklyn Navy Yard, New York.

Newcastle then worked up at Scapa Flow before re-joining the Eastern Fleet at Kenya, resuming her role as flagship of the 4th Cruiser Squadron. She continued to be employed on commerce protection duties as well as attempting to intercept supply ships used for the replenishment of German U-boats. She took part in Operation Player in the Indian Ocean. Following another refit Newcastle took part in a dramatic search for a German U-boat and Operations Cockpit, Transom and Robson.

Newcastle was finally decommissioned and sold for scrap in 1959, and subsequently broken up at Faslane.

For deliveries to EU countries, we will pay the VAT so you don't have to - prices are inclusive of EU VAT.
With respect to import customs duties for your EU country we will send the consignment using the appropriate Common Customs Tariff number 970110000 which provides the benefit of ZERO CUSTOMS DUTIES courtesy of the UK - EU Trade & Co-operation Agreement.

For deliveries outside of the UK and EU countries you will be liable for any import duties to the country of destination and any local sales taxes appropriate to the delivery address, if they are applicable - we will ship the consignment with the appropriate harmonized commodity code and with an accurate invoice. The appropriate Common Customs Tariff number is 970110000 if you need to check before purchasing. All duties and taxes, if any, will be collected by the courier or delivery company and they will charge a modest standard administration charge for performing this function on your behalf. 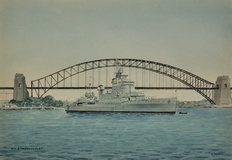