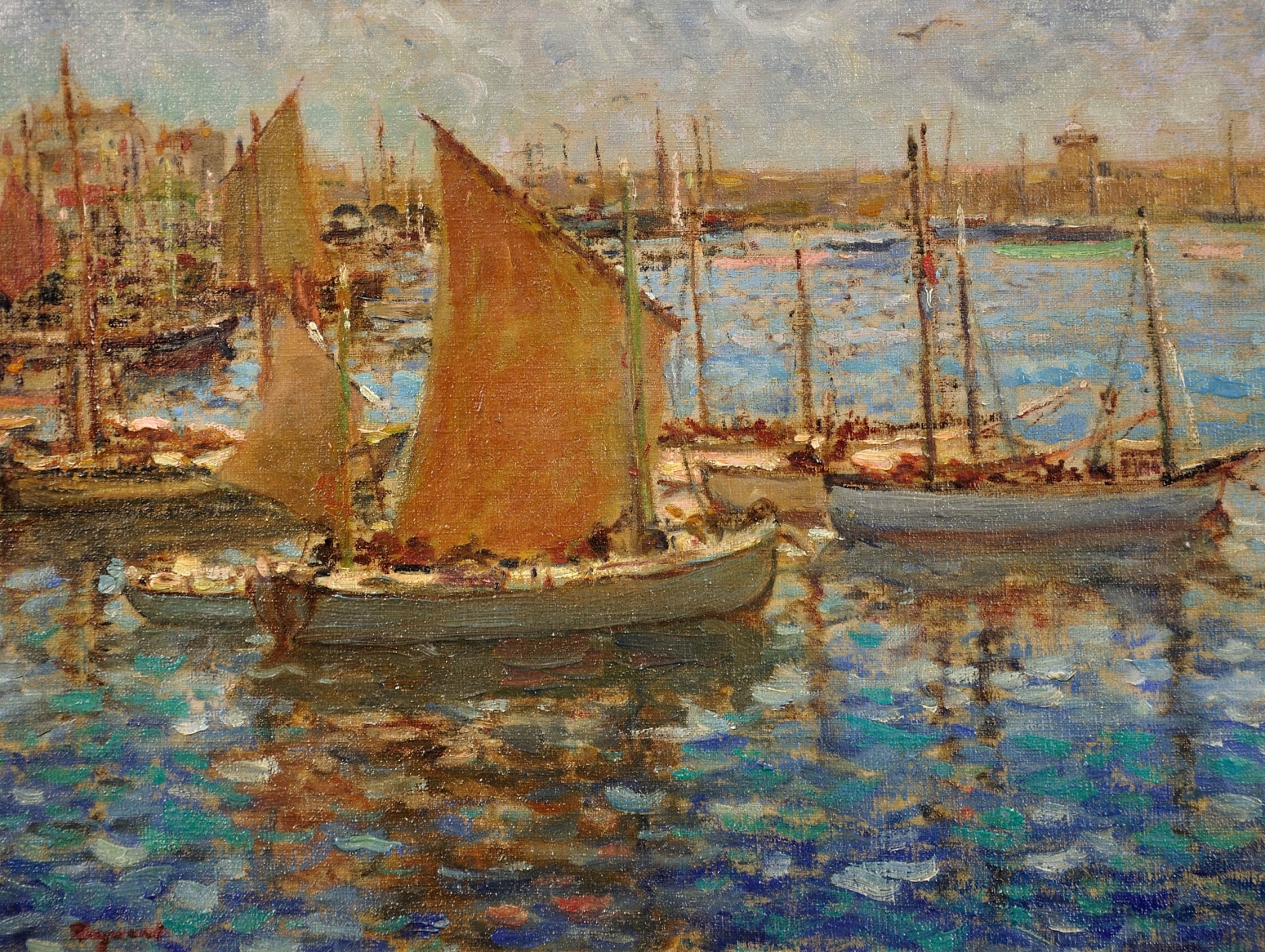 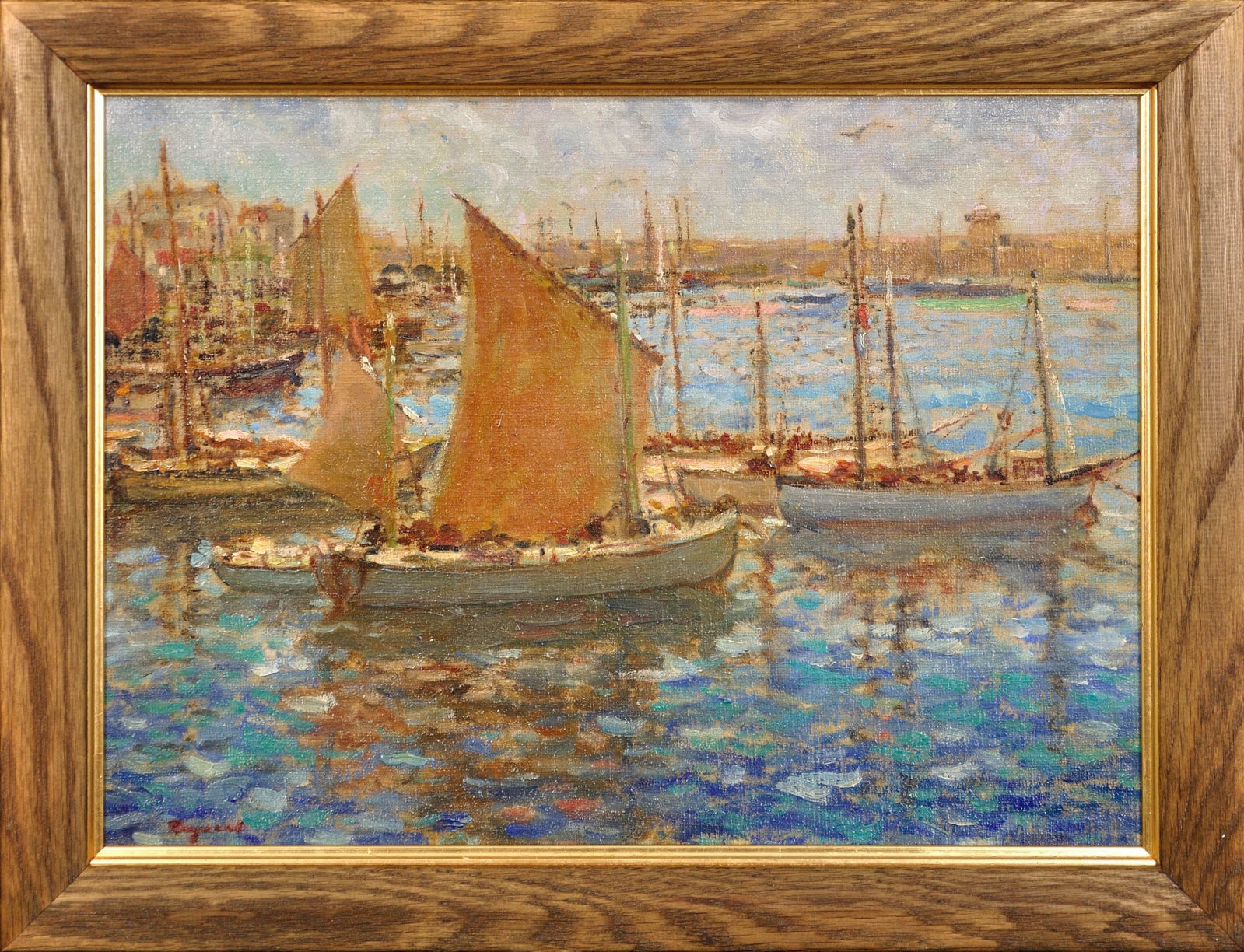 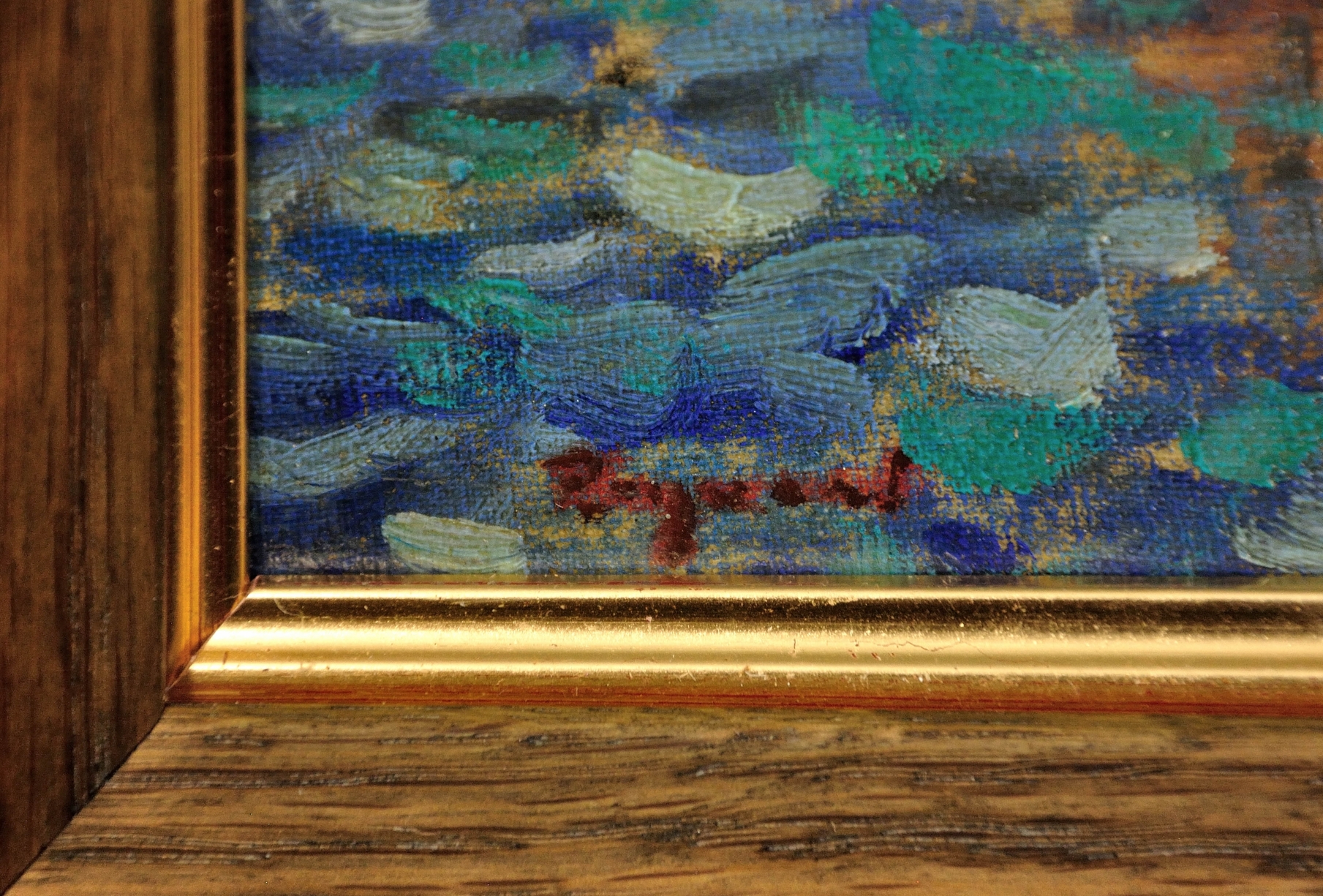 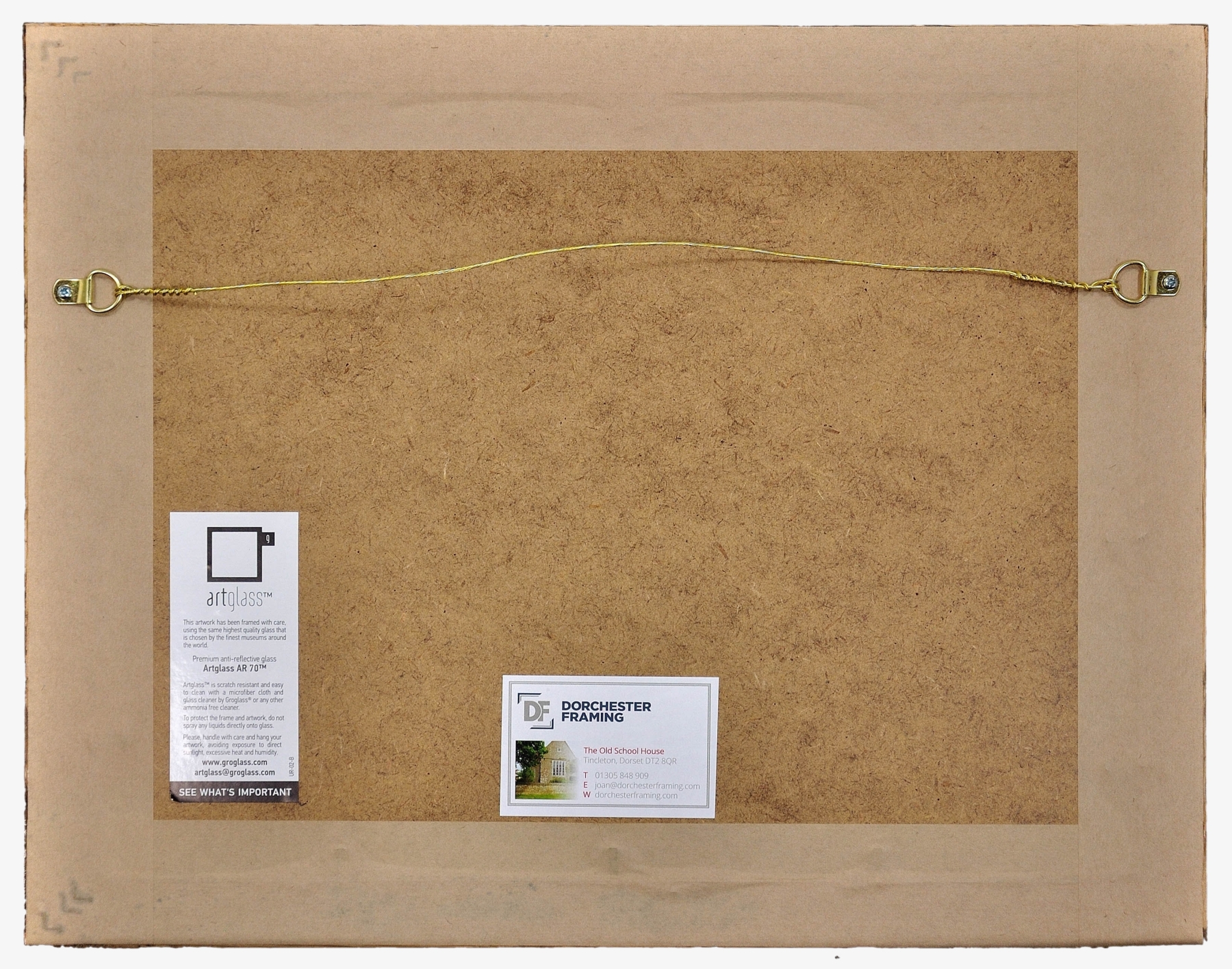 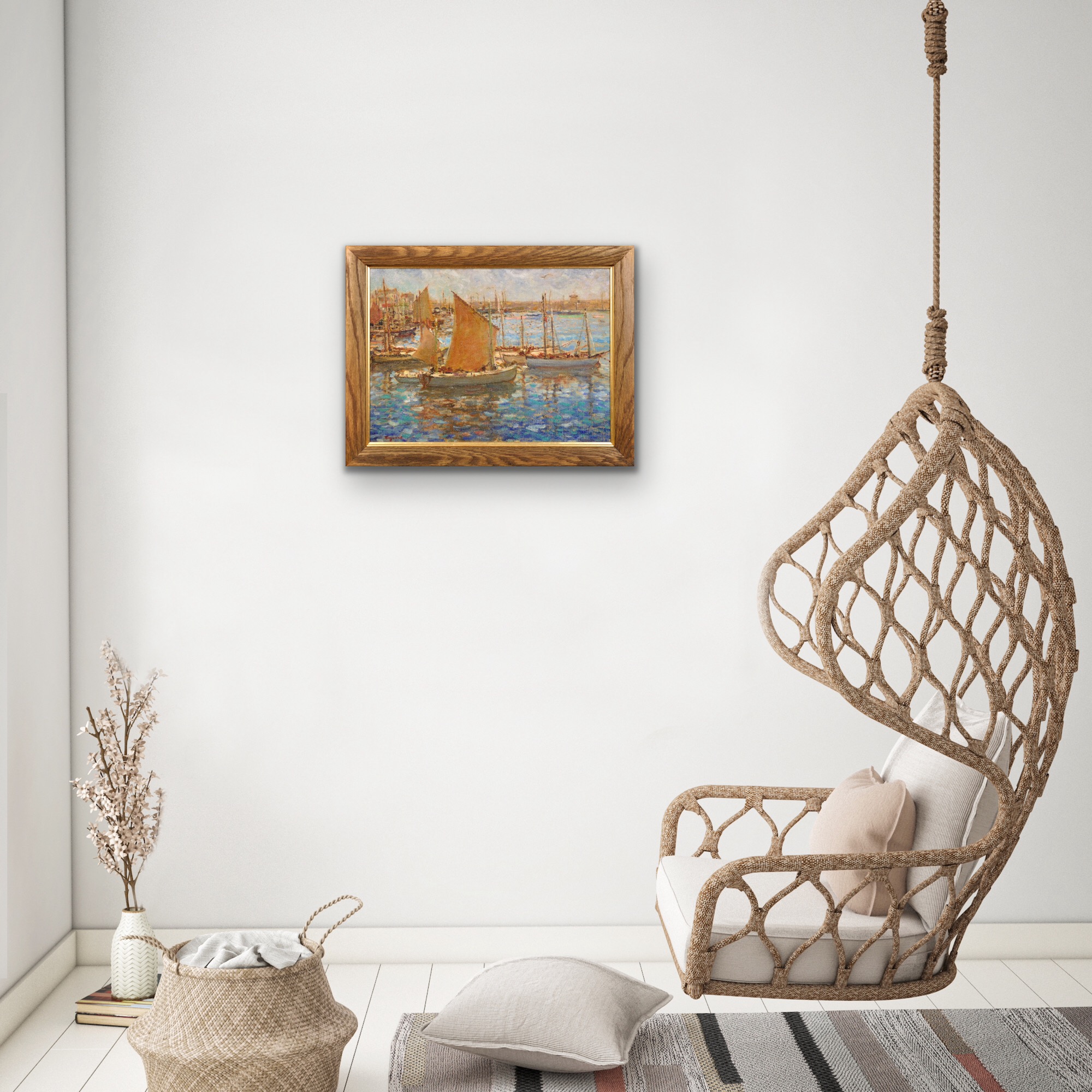 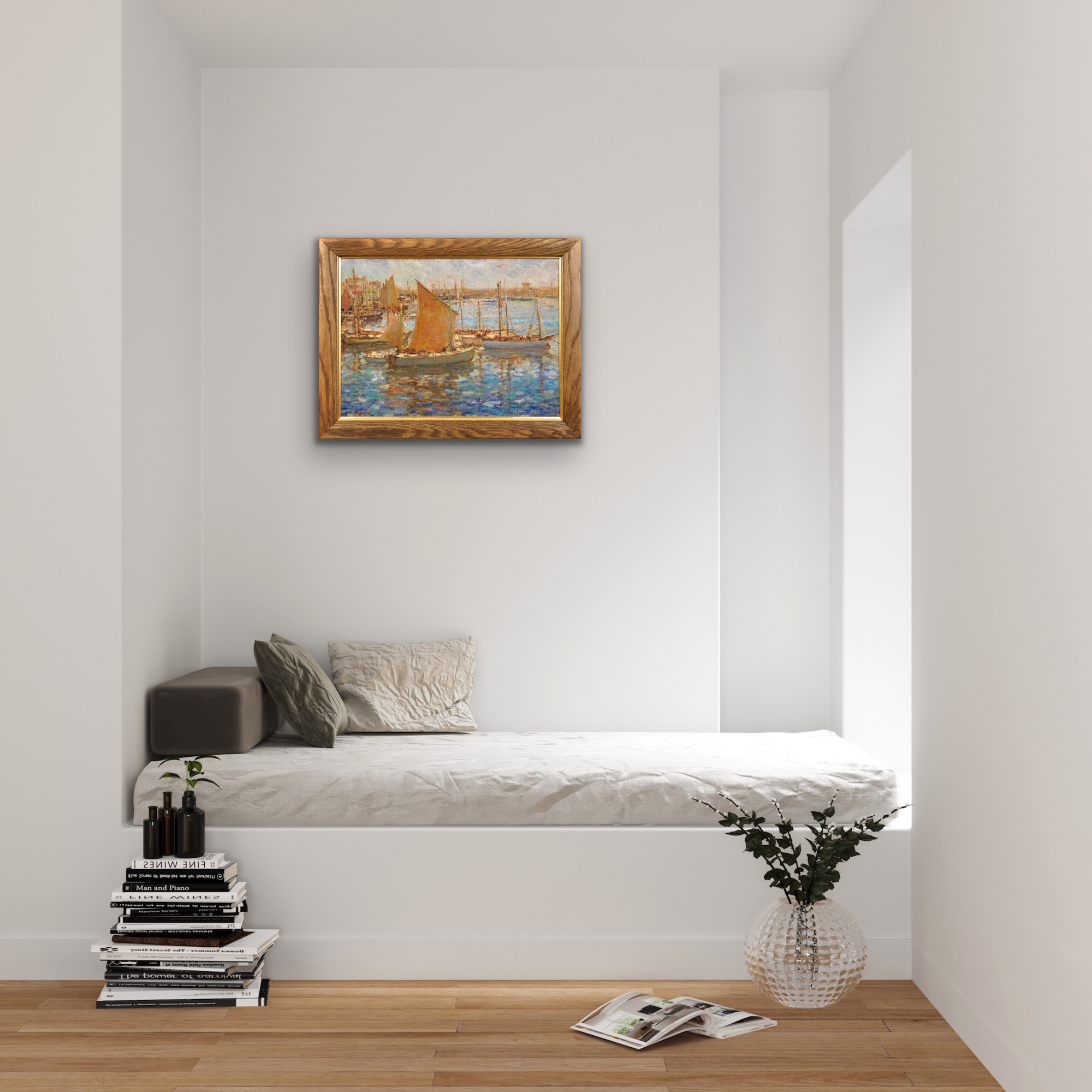 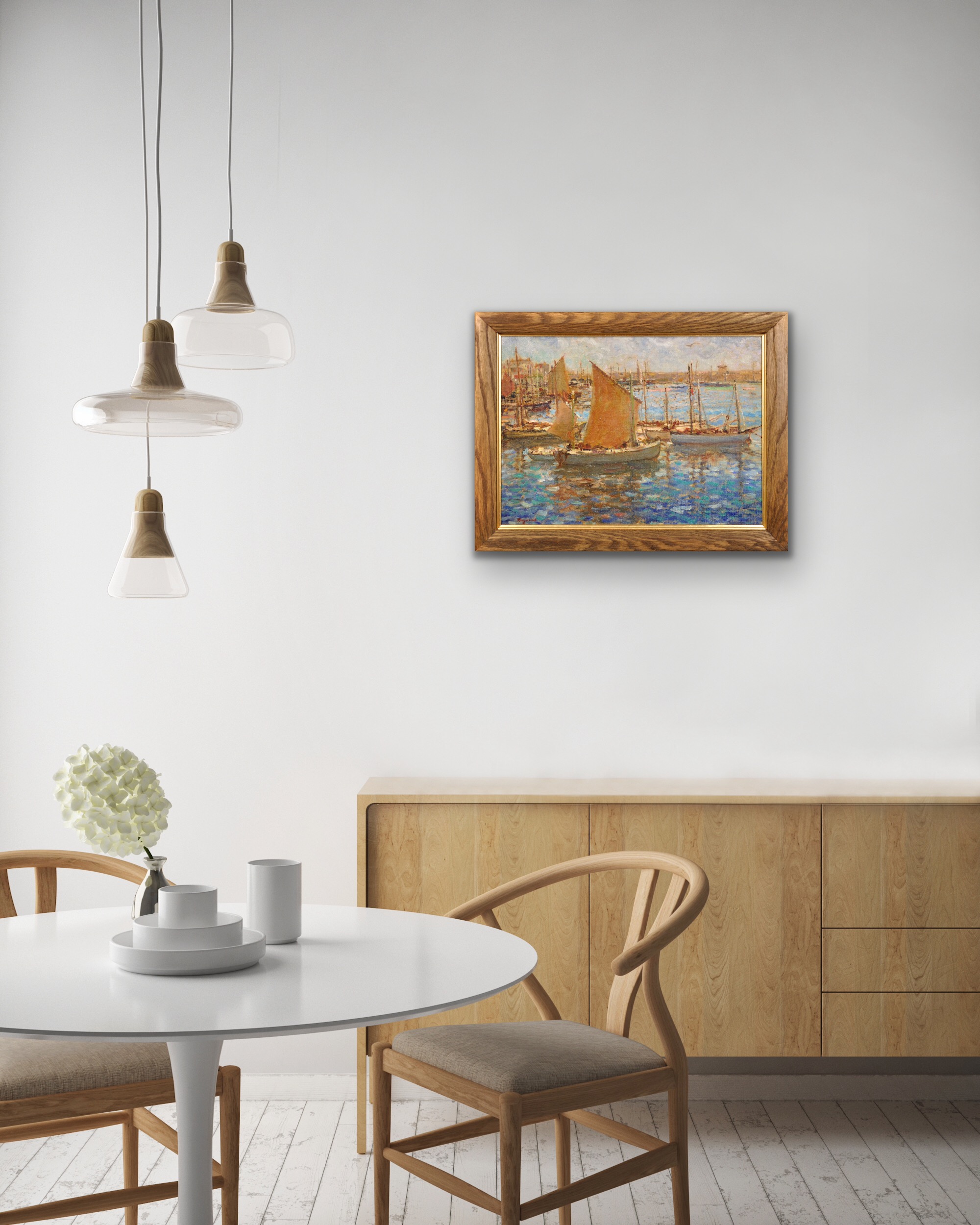 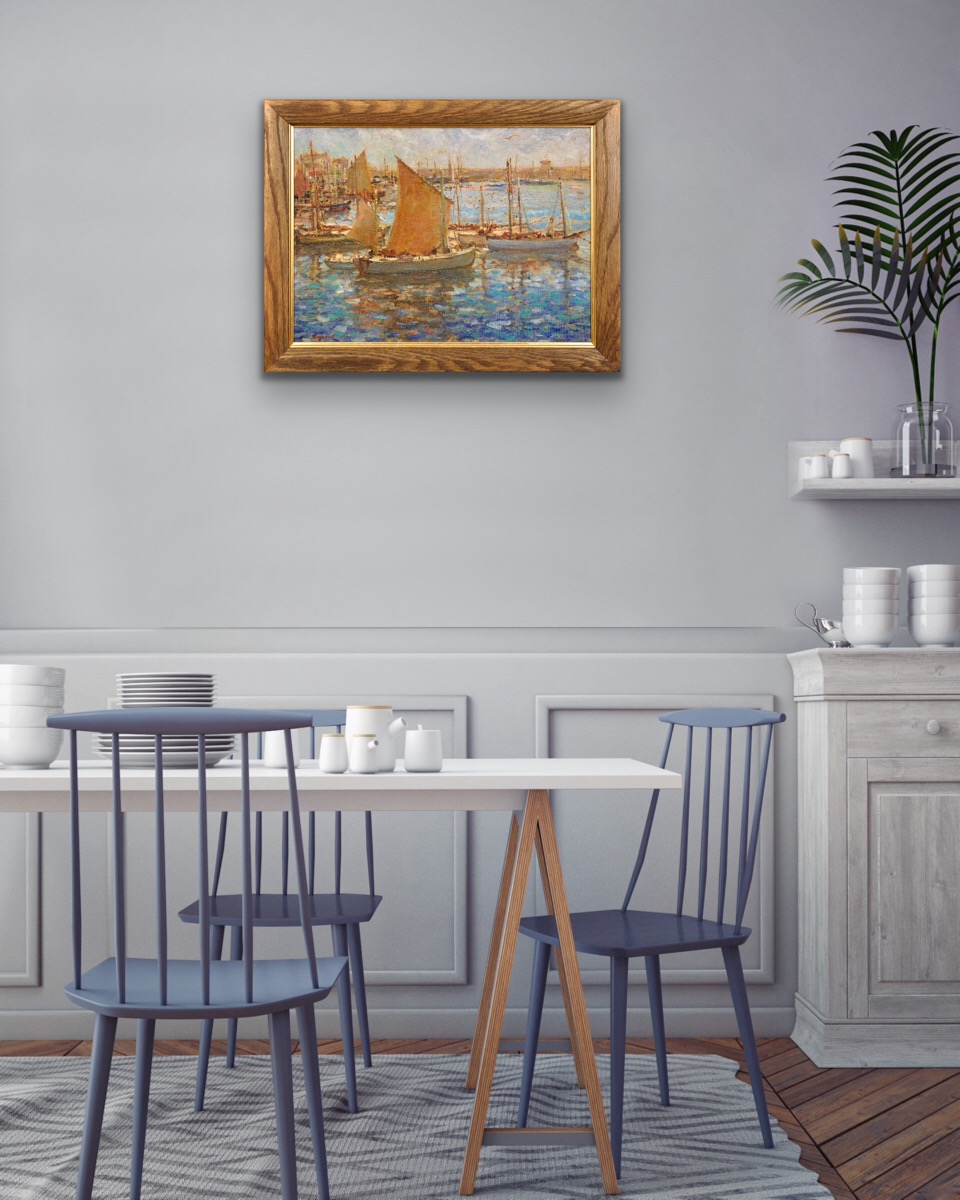 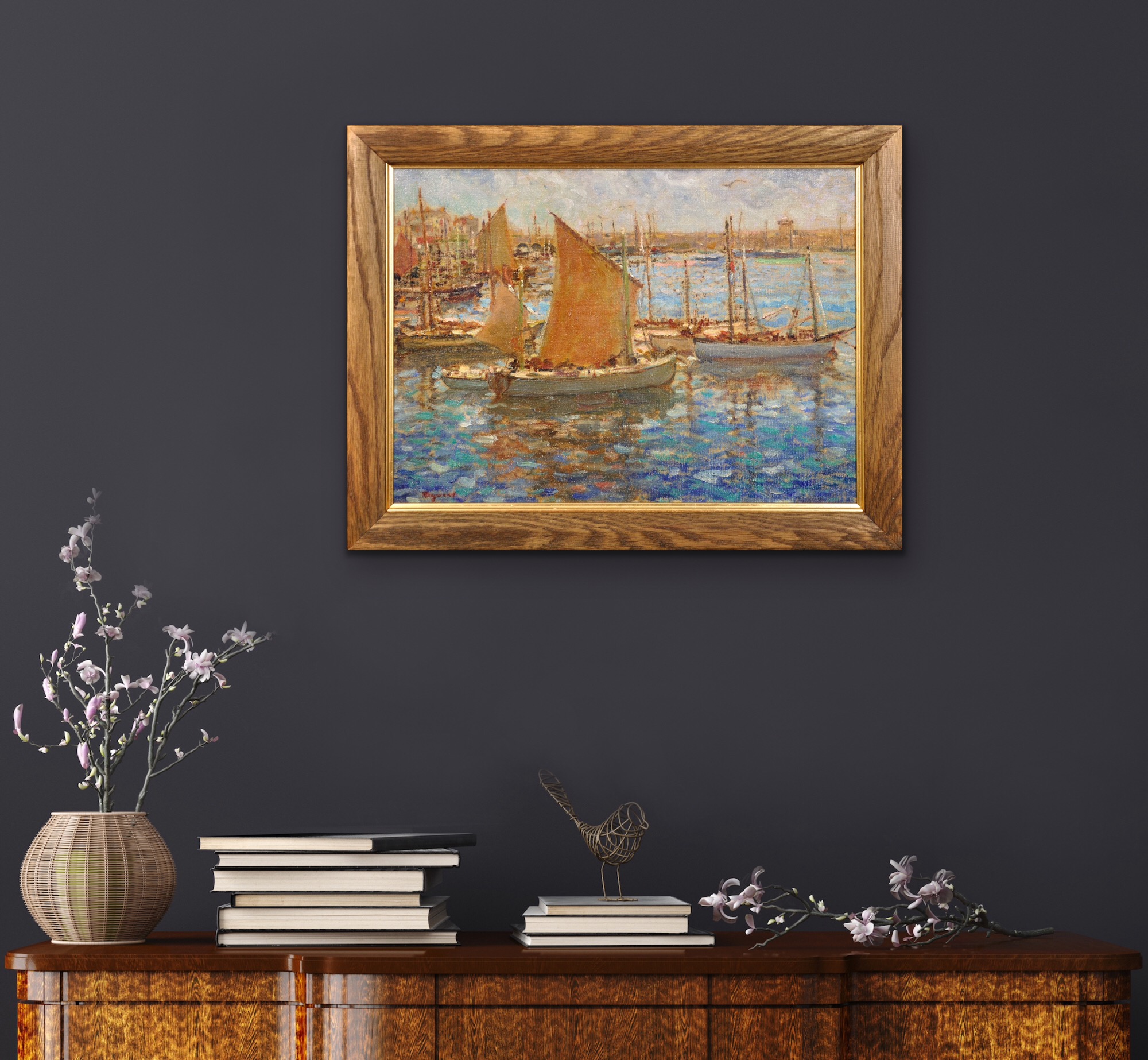 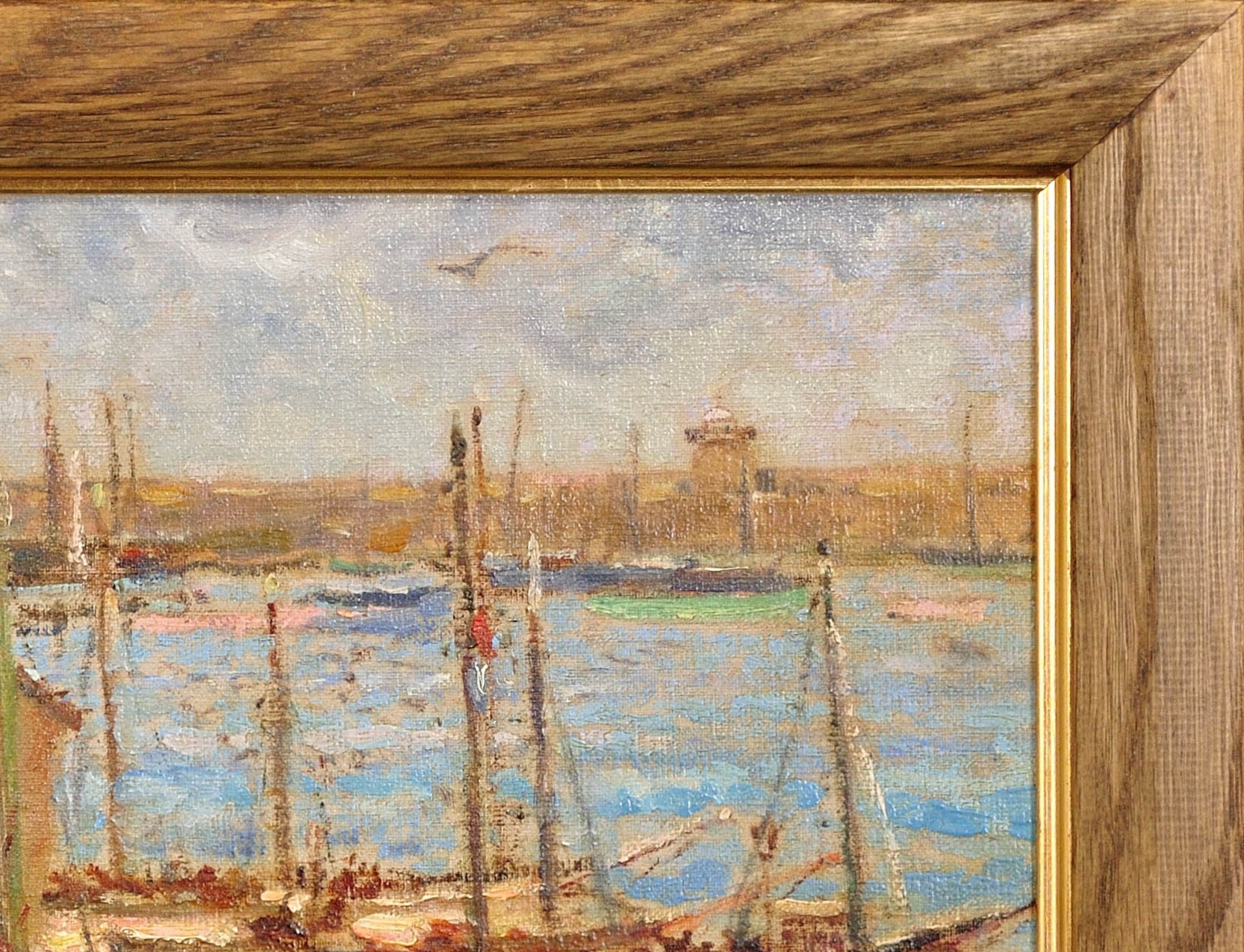 Available for sale from Big Sky Fine Art; this original oil painting by Grant Tyson Reynard dating from the period between1914 and 1924.
The painting is presented and supplied in a sympathetic contemporary frame (which is shown in these photographs), and behind premium anti-reflective glass with UV Protection greater than 70% (Artglass AR 70™).
The painted surface has benefitted from cleaning and conservation, which took place in 2022 on our instructions.
This antique painting is in very good condition, commensurate with its age. It wants for nothing and is supplied ready to hang and display.
The painting is signed lower left.

Grant Tyson Reynard was an accomplished American who gained an international reputation as a painter, printmaker, teacher and writer. He was born in Grand Island, Nebraska 20th October 1887 to Stephen Blackstone and Jennie Lynd Reynard. His father ran a music store and was also the manager of the Grand Island Opera House. As a youngster Grant would sketch the well-known people who visited the community. He had an early appreciation of music, sang well and originally trained as a pianist. However, he chose to pursue a career in the visual arts, studying at the Art Institute of Chicago, 1906-7, working in the days and studying at night, and then the Chicago Academy of Fine Arts 1908-1911.

In 1914 he moved to New Jersey to become a freelance illustrator, and attended summer classes in illustration organised by Harvey Dunn. It was here that he also met and became lifelong friends with John Steuart Curry, Charles Chapman, Mahonri Young and Harry Wickey, all prominent artists. He maintained a studio at Leonia, New Jersey for many years.
He quickly established himself as a top illustrator, contributing to major publications of his day, including Rednook Magazine (where he was also the Art Editor), The Saturday Evening Post, Harper’s Bazaar, Collier’s, Ladies’ Home Journal, Country Gentleman, McCalls and Cosmopolitan.

His increasing interest in painting and etching took him to the chief centres of study in Europe, especially Paris and London.

From 1926 through to 1937 he was a fellow of the MacDowell colony in Petersborough, New Hampshire. Reynard was elected a member of the National Academy of Design and the American Watercolour Society. He was the president of the Montclair Art Museum, and served six years on the faculty of the Grand Central School of Art, New York. He also conducted the Department of Art at Millbrook School, Millbrock, New York, and was artist-in-residence at Palo Duro School of Art in Texas. In 1955 Baldwin-Wallace College awarded him an honourary Doctor of Humane Letters (LHD).

Over the years Reynard’s focus shifted from illustration work to his own creative work, but in addition to producing his own art he also lectured in art and taught at several difference schools. Although he travelled extensively he remained loyal to his roots, returning to Nebraska every summer to conduct lectures and art classes in Omaha, Lincoln, Grand Island, Kearney and North Platte.

In 1941 Reynard published a book of his poems “Rattling Home for Christmas” which he also illustrated. He remained deeply involved in music, always being a skilled pianist, as well as literature, and his prints often depicted concert halls and museums.

Grant Reynard was married to Gwendolyn Crawford and they had two daughters. He died on 13th August 1968 in Leonia, New Jersey.

Today his work is included in the collections of the Library of Congress, Washington DC, Metropolitan Museum of Art, New York, the Smithsonian American Art Museum, and Sheldon Museum of Art, Lincoln, Nebraska. The Museum of Nebraska Art has the largest single collection of Grant Reynard’s art works.

This original oil painting depicts fishing boats in the port of St. Ives in the American Impressionism style. From the type of the vessels, it is likely that this was painted between 1912 and 1925. The town of St Ives in the far south-west of Cornwall has grown around its picturesque harbour since it was first settled in the 6th century. It was once one of the most important pilchard landing ports in Cornwall and at the time this painting was created, between 1912 and 1925, was still a significant port. Today the harbour is still thriving, although no longer so dependent on fishing. The painting perfectly captures the charm of this harbour, and the fishing vessels within it. Some of the vessels have a sail on their masts, reddish brown or white in colour. Other vessels have bare masts. In the background, on the northern side of the harbour we see Smeaton’s Pier, which was constructed between 1767 and 1770. The pier was built by dumping rubble onto the seabed and then building the walls around this core. Smeaton’s Pier was originally 120 meters long with its elegant lighthouse sited at the end. However, in the 1890s the pier was extended to almost double this length and another lighthouse was added. We can see the three arches at the land end of the pier, which were added in during the 1890 modifications, and intended to allow the circulation of seawater and thus prevent the build-up of sand in the harbour. 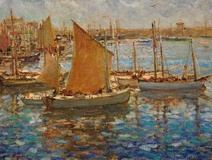