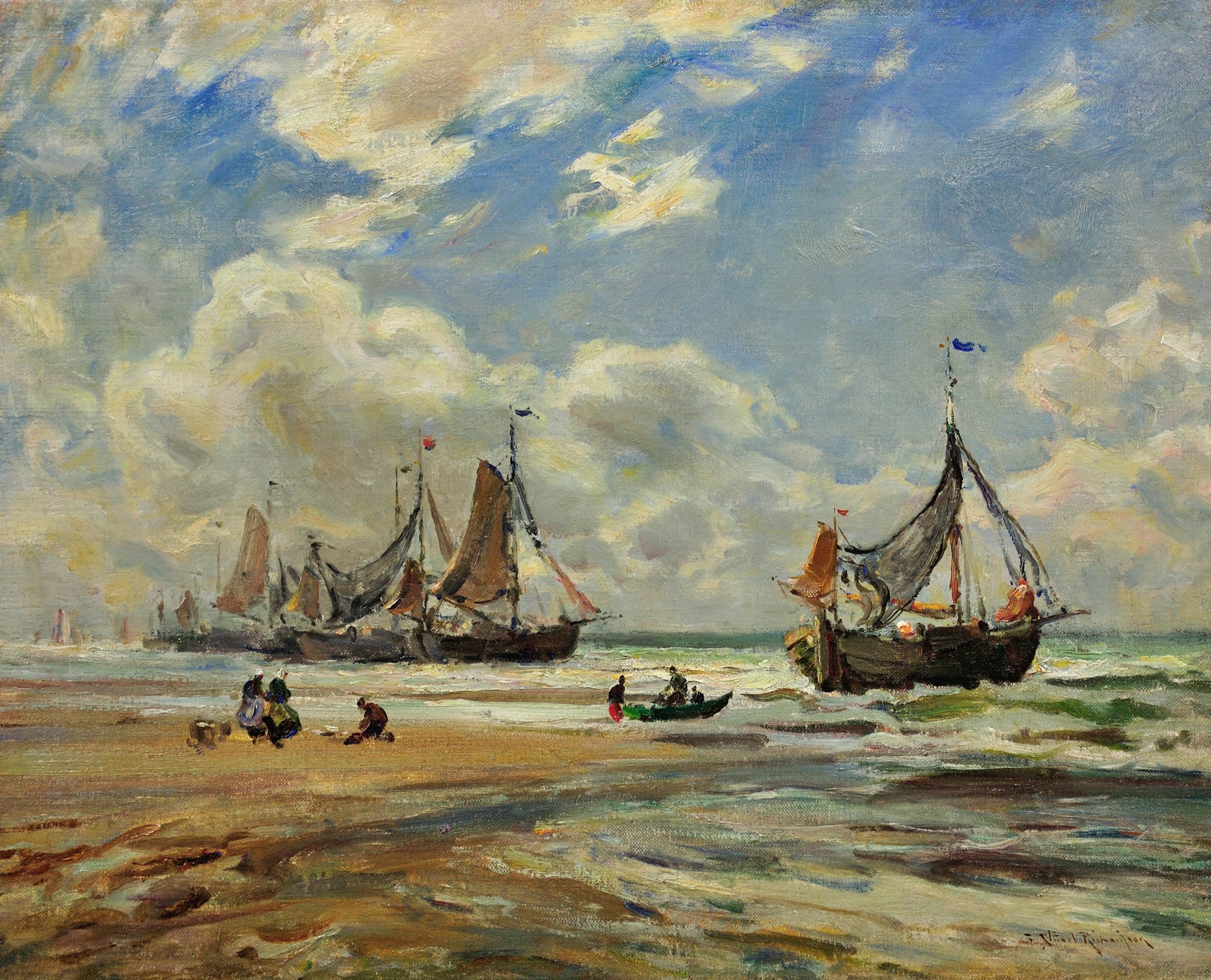 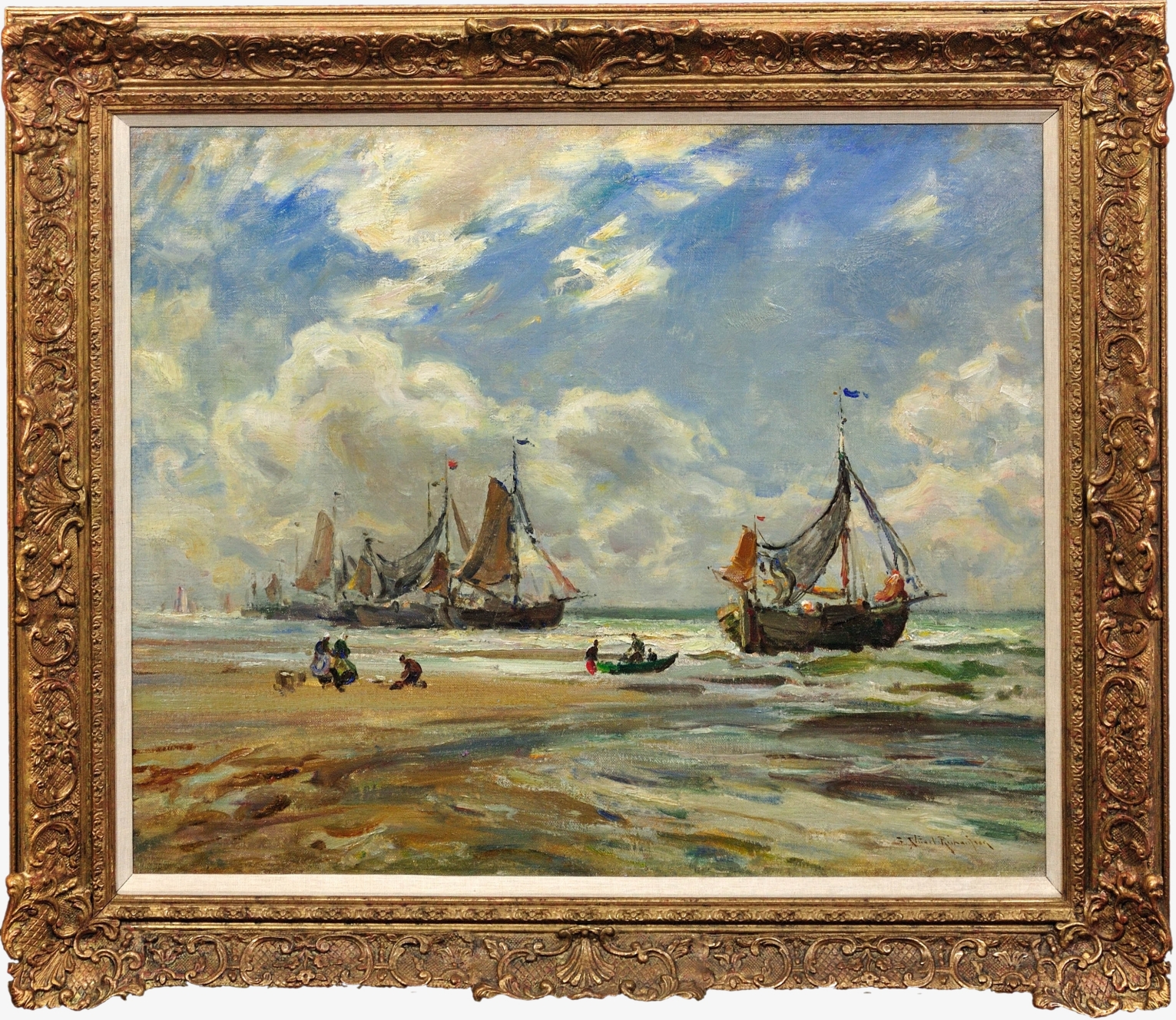 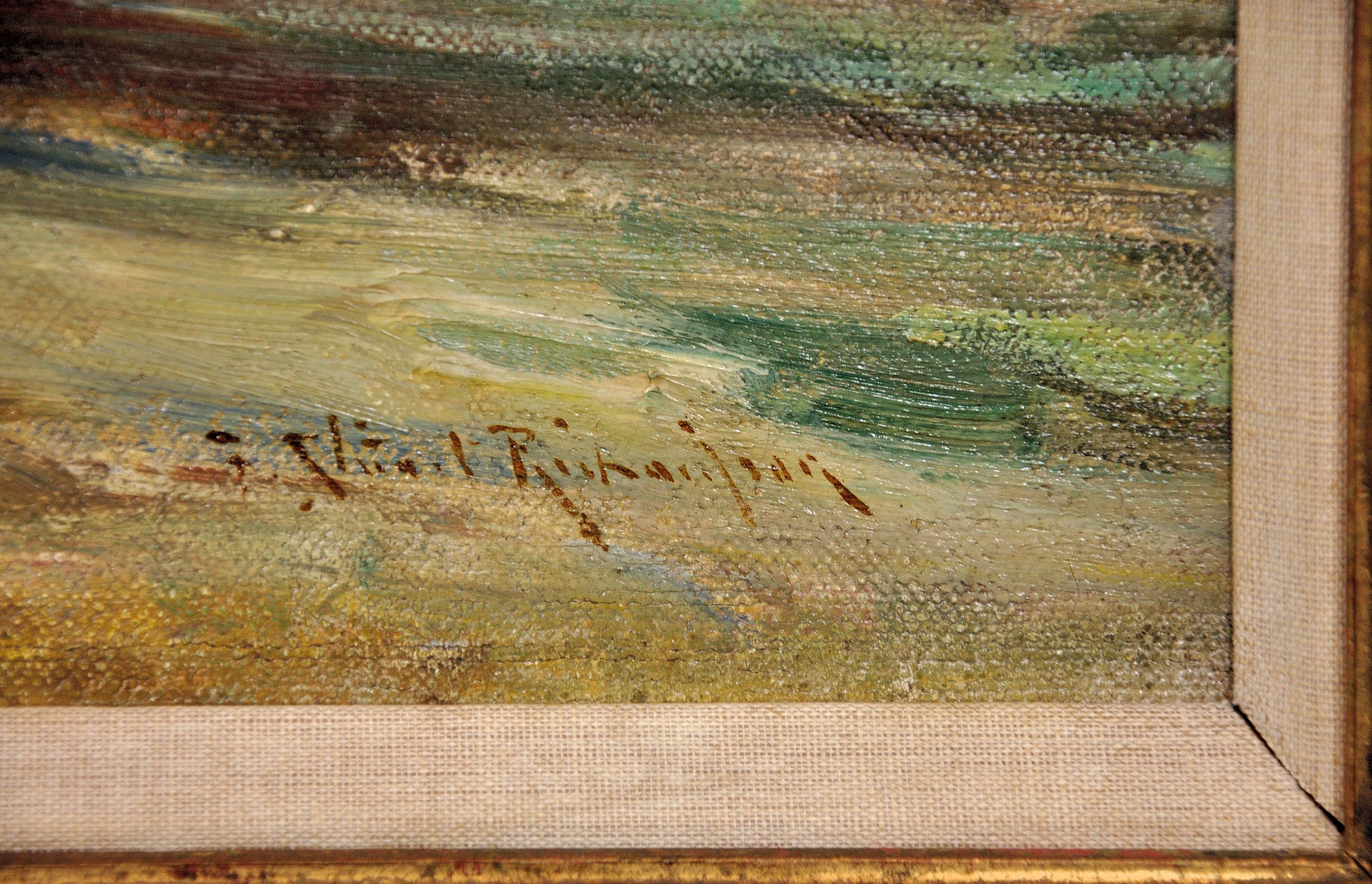 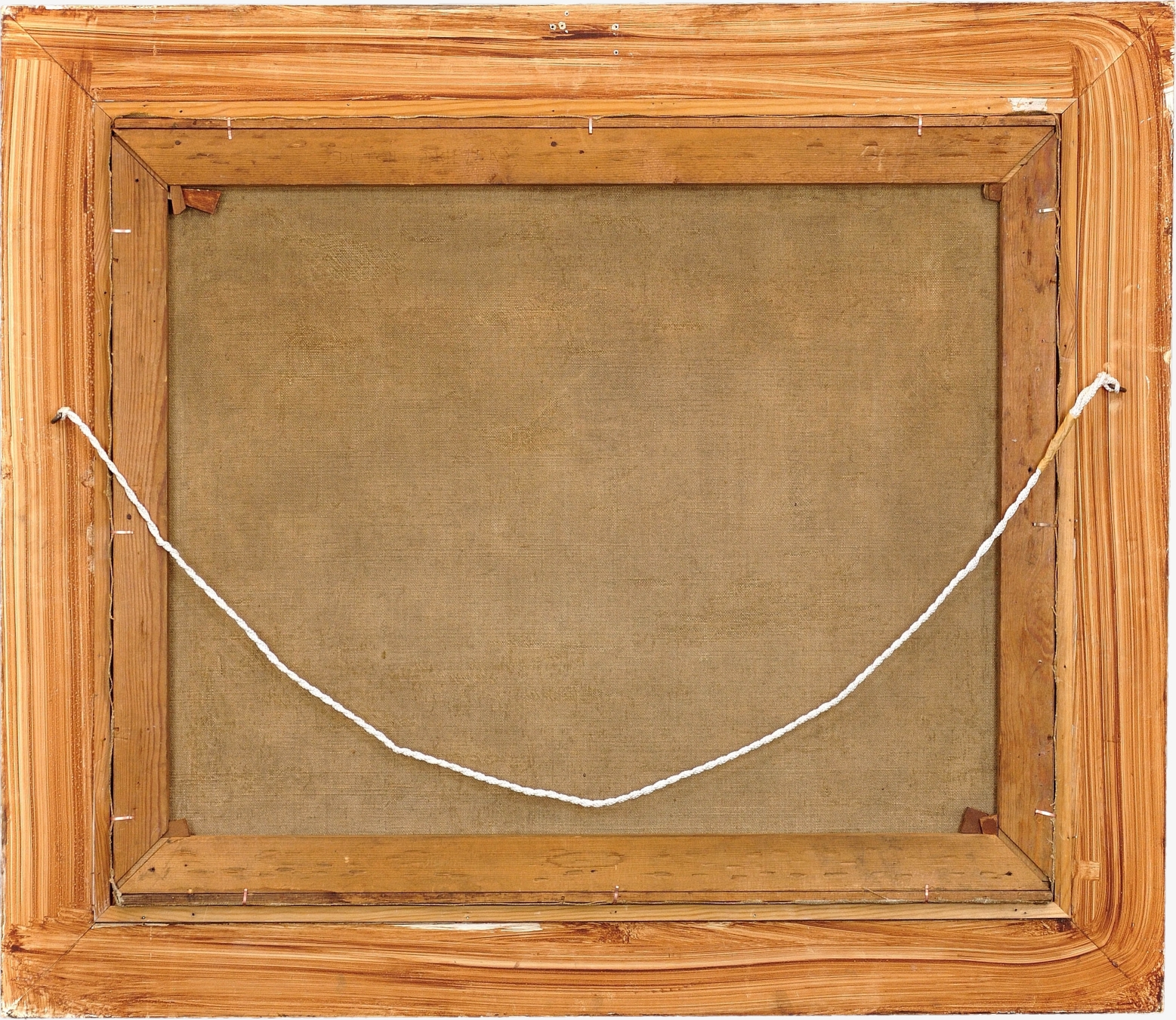 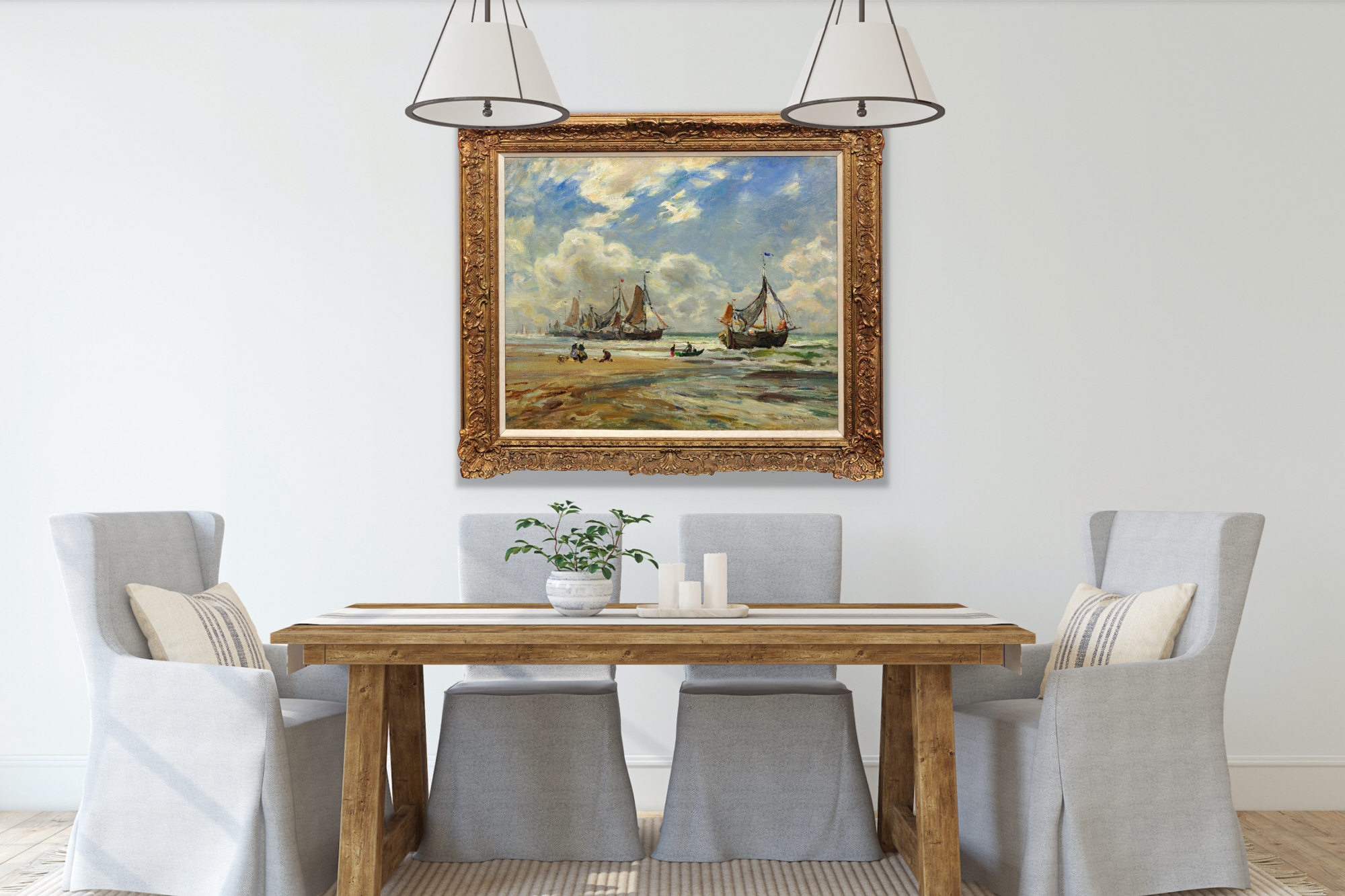 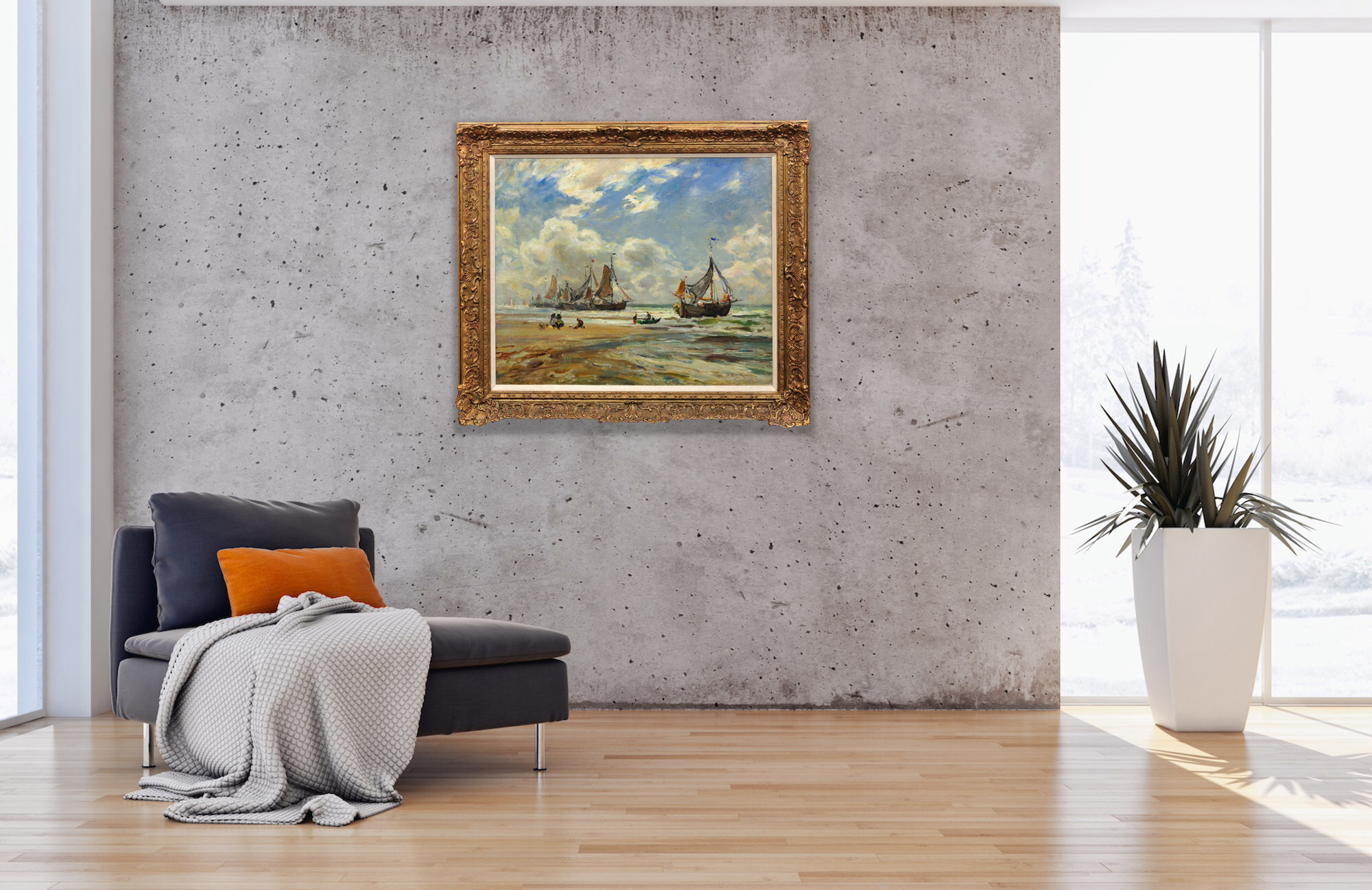 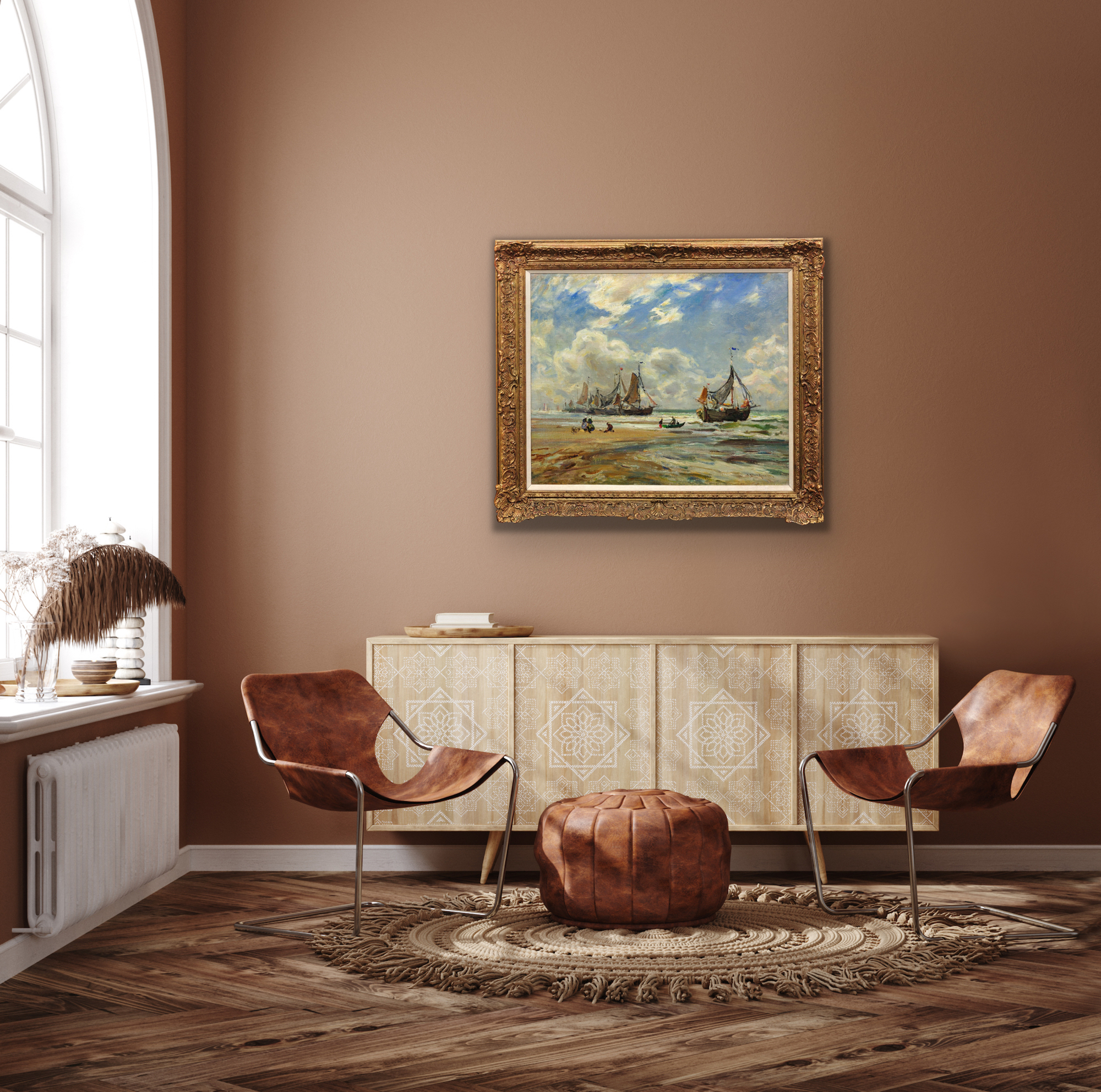 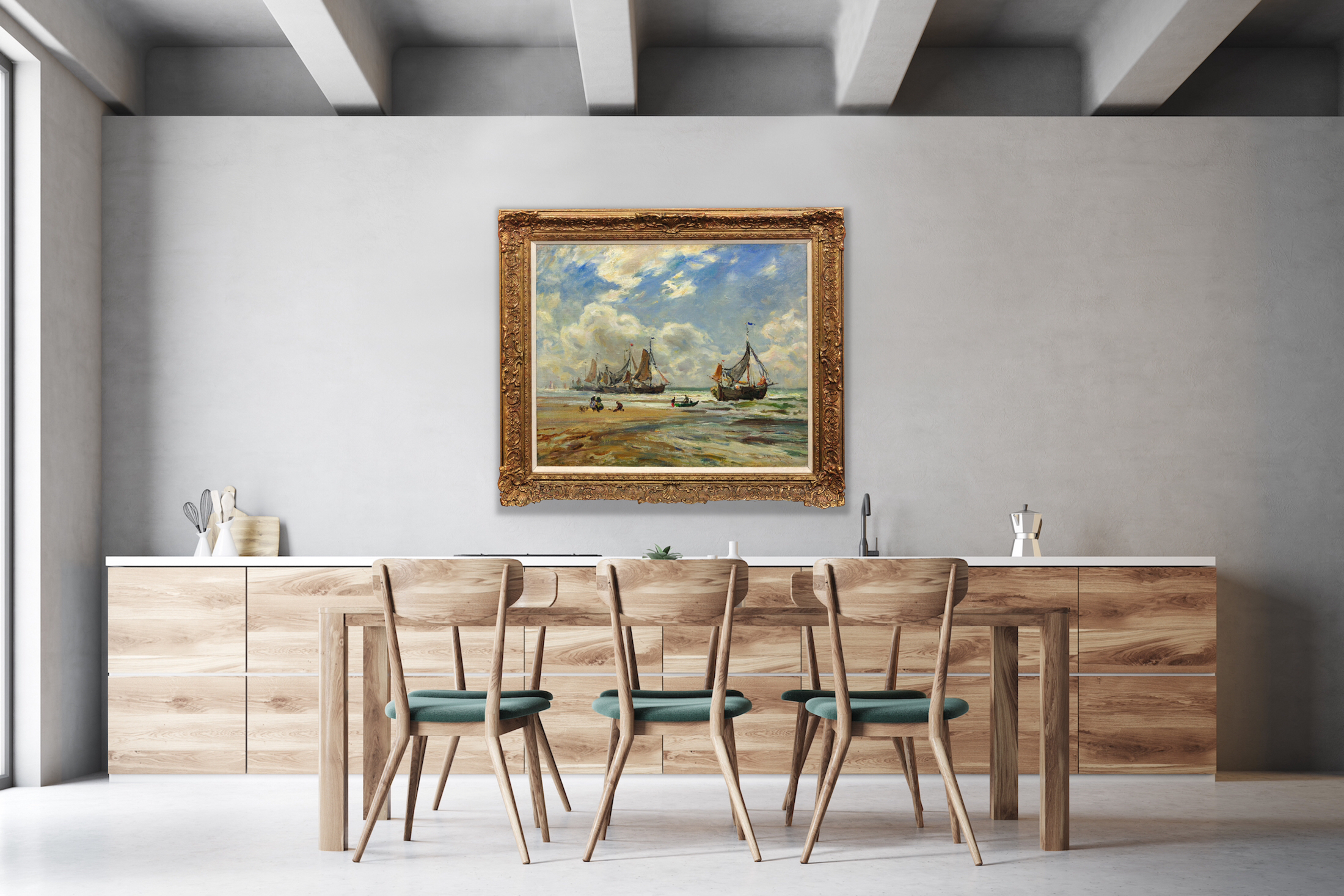 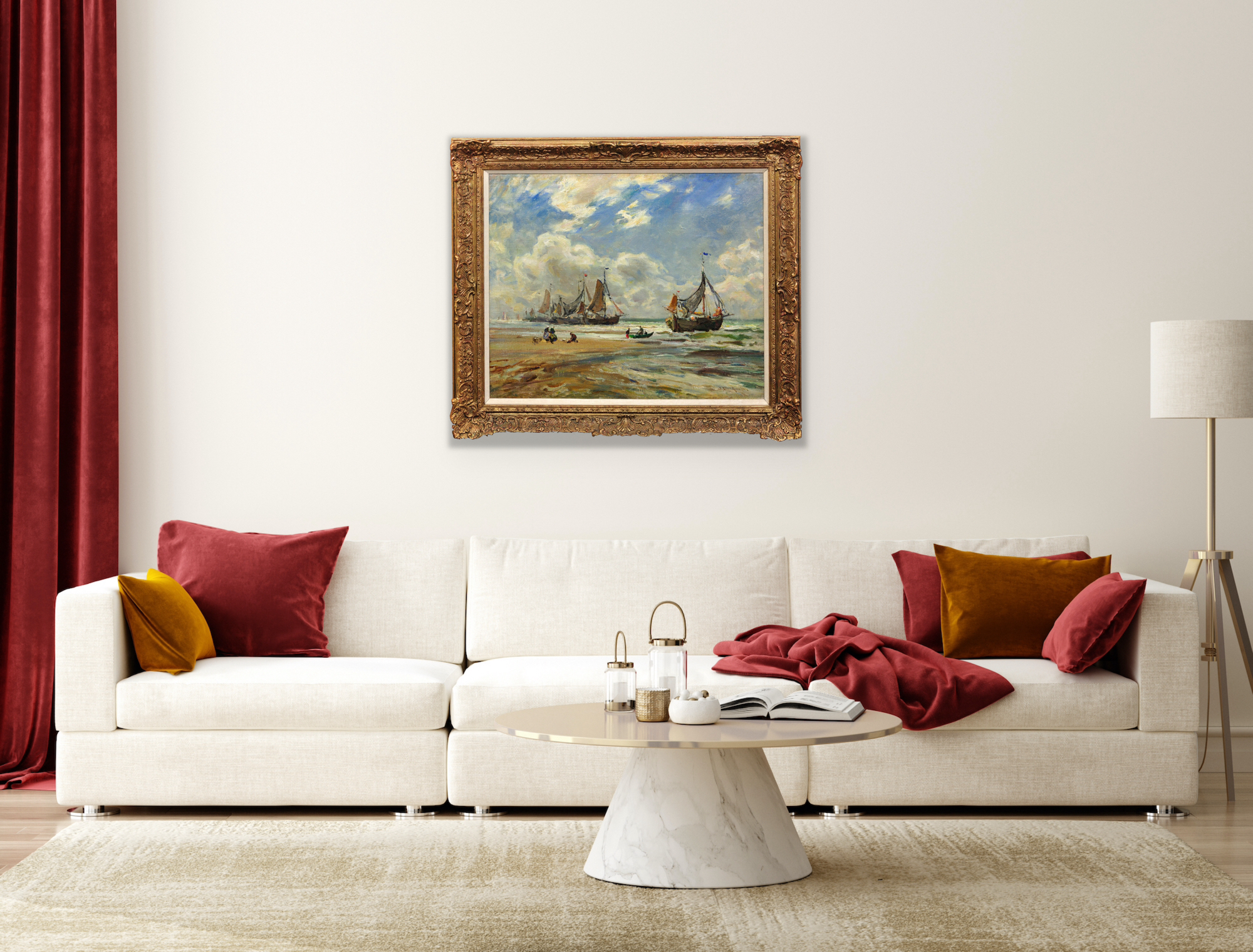 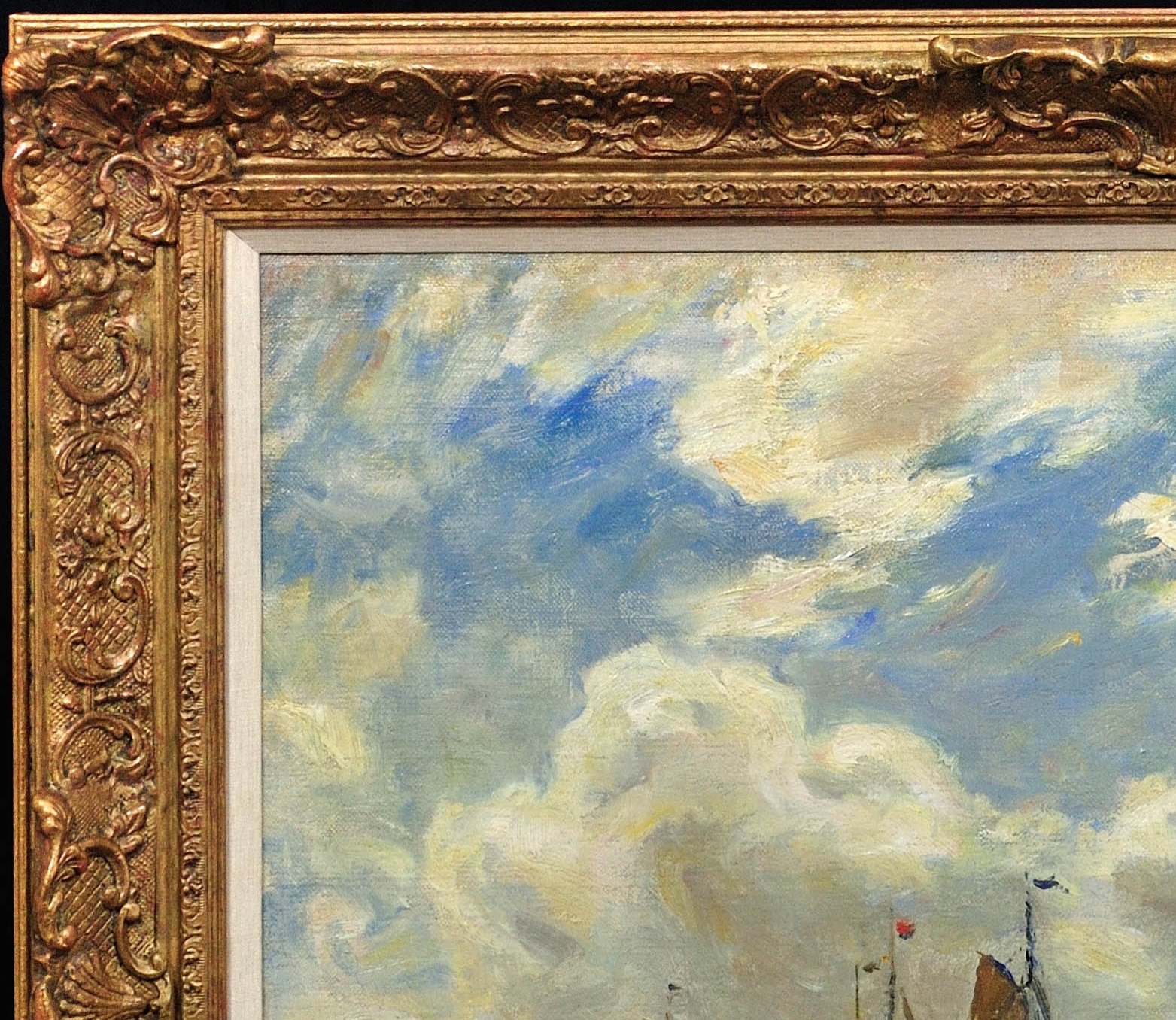 Bomschuiten on the Beach at Katwijk Aan Zee

For sale from Big Sky Fine Art; this original oil painting by Frederick Stuart Richardson dating from the turn of the 19th into the 20th century and is presented and supplied in its original frame (which is shown in these photographs).
The painted surface, the canvas and the frame has benefitted from cleaning, restoration and conservation, which took place in 2021 on our instructions. This antique painting is now in very good condition, commensurate with age. It wants for nothing and is supplied ready to hang and display.
The painting is signed lower right.

Frederick Richardson was an English painter, noted especially for his landscape and coastal scenes in oil and watercolours. He was talented, respected and successful and established strong ties with several areas of the UK.

He was born in Clifton, Bristol, on 9 December 1855, the second son of the Rev John Richardson, who was Rector of Sandy in Bedfordshire. Frederick Richardson was educated at Repton School, and after leaving school commenced training as a civil engineer at Crystal Palace in London. In 1877 he inherited a legacy which provided him with an annual income; this enabled him to abandon his career prospects as an engineer in order to study art. He travelled to Paris and became a student of Carolus Duran. Whilst in Paris he met a large number of fellow students, including John Singer Sargent, and future members of the Staithes Group.
On returning to England Richardson set up a base in his father’s rectory in Sandy. He used some of the outbuildings as a study and remained there until his father’s death in 1913. From his base in Sandy Richardson travelled extensively, painting landscapes and coastal scenes in Scotland, Ireland, Italy, Holland, France and Cornwall.

He became an active member of the Staithes Group, visiting the area in Yorkshire where his great-grandfather had been a ship’s chandler, every year. He took a full part in this important northern artists’ colony and exhibited his works with the Staithes Art Club and the annual exhibitions of the Yorkshire Union of Artists. At the turn of the century his elder brother inherited a property at Aislaby in County Durham and, as local vicar, was able to provide him with accommodation whilst he worked in the area.

Richardson was a close colleague of Laura Knight and her husband Harold and when they moved to Cornwall he also began painting there, and became associated with the Newlyn group of painters. Like them he favoured the practice of painting en plein air. He met his future wife whilst on a painting trip to Cornwall and they married in 1912, taking their honeymoon in Holland. A year later they settled in Bristol and went on to have two children.

He normally signed his paintings F S Richardson or with the initials FSR, but left many unsigned. One of his watercolours in in the permanent collection of the Harris Museum & Art Gallery, Preston. An exhibition of Richardson’s work was held at Penlee House Museum in Penzance in 2017.
When not painting Richardson enjoyed fishing and golf. He died in Bristol on 22 April 1934.

This original oil on canvas is entitled Bomschuiten on the beach at Katjik Aan Zee. It is signed lower right. It depicts a scene on the beach, looking out into the sea at the Dutch seaside village of Katwijk ann Zee. The resort is located on the North Sea at the mouth of the Oude Rijn. It is situated in the municipality of Katwijk and the province of South Holland. In the period of 1870 to 1914, when this work would have been created, there was an artists’ colony there known as the Katjijk School. This was part of the international movement of impressionism and belongs to the Hague School.
Katwijk aan Zee was one of the coastal villages on this stretch of coast that did not have a harbour. The ships from these villages therefore had to be suitable to sail from the beach and land there again. They evolved to be simple barge like vessels with heavy duty flat bottoms so they could be walked through the surf on to the flat beaches. They were known in Dutch fishing circles as bomb barges and were used on the north and south Holland coastline. They had a limited lifespan compared to that of other seagoing vessels because of the nature of their use.
This painting shows half a dozen or so of these vessels lined up in the shallow waters to the left of the image, and another, nearer the shore, on the right side of the image. Each boat has a tall mast and white sails flying in the wind. From the apparent movement of the waves and clouds in the sky we see that conditions are bright and breezy. There is a small rowing boat with three figures on the shoreline, and three other figures are on the beach itself, likely occupied with the nets or catch from the larger vessels. 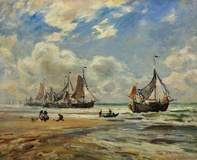