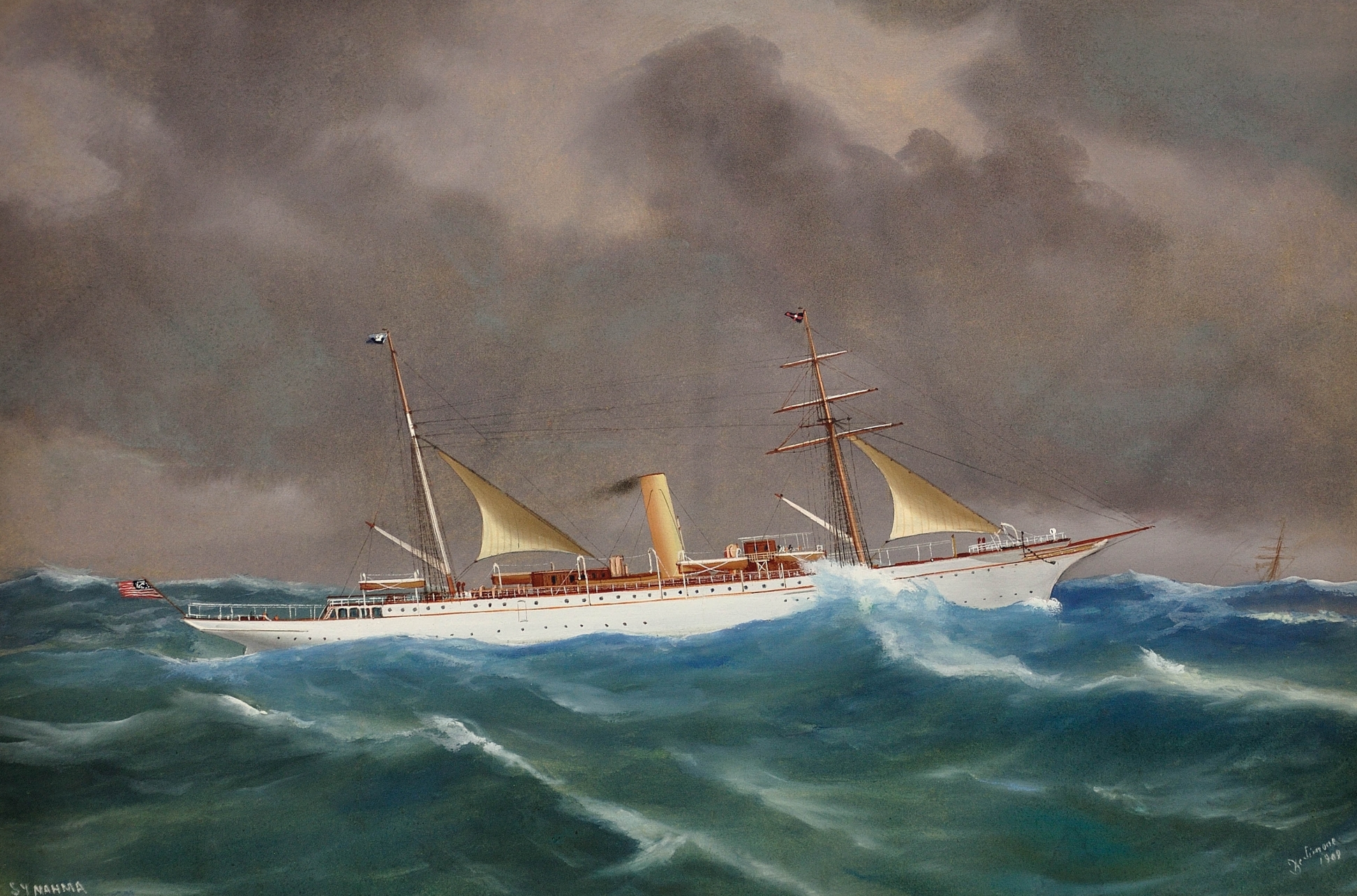 Sold by Big Sky Fine Art; this original painting by the Italian artist Antonio De Simone, dating from 1909.
The painting is presented and supplied in a 1980s glazed frame performed when in previous ownership (which is shown in these photographs).
This antique piece is in superb condition. It wants for nothing and is supplied ready to hang and display.
The painting is signed and dated lower right.

At the end of the 19th century/beginning of the twentieth century there was a group of artists from Naples specialising in ship portraiture known as the pierhead painters. The De Simone family were the best known of this group, usually seen as the leading Italian artists in gouache of this period. Clients of the De Simon family came from all over the world, although most of the ships they painted were British sailing vessels, yachts or steamers.
Most sought after are their yacht portraits which appear regularly on the art market with strongly rising prices.

Within that family Antonio de Simone is widely acknowledged as the most worldly and talented. Antonio de Simon tended to work in oils and gouache. His output was large as his works were much sought after and he was equally at home painting small merchant schooners as elaborate Victorian schooner yachts. He lived in Naples, which was a favourite place for nineteenth century yachts to anchor and he enjoyed a wide field of patronage. The date of his death is not clear, but he was born in 1851 and is known to have produced paintings until 1919. Antonio De Simone’s style is quite accurate and he often, as in the case of the original piece offered here, painted a pair of images of the same vessel, one in calm seas and one in stormy seas. Antonio de Simone also painted some battle pieces, such as the Bombardment of Alexandria in 1882.Today, examples of his work are in the Maritime Museum, Kronborg Castle, Elsinore, Denmark, the National Maritime Museum, Greenwich, London, and the Mariners Museum, Newport, USA.


The US SY Nahma was a vessel that was part of American high society for some years, then became a military vessel during the First World War and was used commercially thereafter.
The Nahma was an luxurious yacht and was built in 1897 by the Clydebank Engine and Shipbuilding Co., Glasgow, Scotland for Robert Walton Goelet of New York. He was an American heir, businessman and keen yachtsman. The vessel had been designed for him by George L. Watson and was launched on 14 February 1897. Watson had also designed the USS Mayflower, a sister ship to the Nahma which was owned by Robert Goelet’s brother. When the Nahma first arrived in Newport the New York Times reported “She is one of the most magnificently appointed yachts in the world, and there are but seven larger steam yachts afloat. She is built entirely of steel, in the spar-deck principle, and has a clipper stem and a square stern. From the foremost to with fifty feet of the taffrail extends the promenade, or boat, deck, which has a length of 190 feet. The vessel is schooner rigged, each mast being in one length. She has a standing bowsprit, and in all respects her rig is most smart in appearance. She is painted white, with a green boat top, and, with her great array of portholes, her fine set of boats including a steam launch, and her large funnels, ventilators and awning supports, which are of metal tubes, she presents a handsome appearance”. After the death of Robert Goelet in 1899 the Nahma was used extensively for summer cruising in European waters by his widow, then his son, Robert Walton Goelet. The rich and famous of Europe, including Emperors and British royalty, were entertained on the yacht during these years.

During the Great War the yacht was lent at no cost to the US Navy and commissioned as the USS Nahma. She was commanded by Lt. Comdr. E. Frederick. The vessel saw almost two years of active service in the European theatre, working on convoy duties between the British Isles and Gibraltar, and on submarine patrols. On Armistice Day, 1918, the vessel was ordered to sail to Marseille, France where she picked up Admiral Bristol, who had been named High Commissioner to Turkey and transported him and his staff to Istanbul. She then continued to operate in the Aegean and Black Seas, carrying relief supplies to refugee areas, evacuating American nationals, non-combatants and the sick and wounded from civil war-torn areas of Russia and Turkey. She also provided vital communications between ports.

The vessel was decommissioned in 1919 at Greenock, Scotland and then returned to her owner, Robert Walton Goelet. Nahma was later sold, renamed Istar and registered under the British flag. During the prohibition years she became part of the illicit rum running fleet off the Virginia Capes, bringing Scottish whisky. She was also later converted for use as a shark processing factory ship. She was scuttled in 1931 off Durban, South Africa.

The work offered for sale here is an original gouache on paper work by Antonio de Simone, painted in 1909. It depicts the United States Steam Yacht Nahma sailing in heavy seas and is likely to have been commissioned as the companion piece to an earlier painting of the same vessel in calm seas in the Bay of Naples in 1906. The image shows the vessel travelling left to right, for the viewer. There are sails flying from her two large masts, cream in colour but glowing almost gold in the dramatic light. There is no clue as to the whereabouts of the vessels geographically, but there is the mast of another vessel in the far right of the background. There are a couple of tiny figures shown on the upper deck. The seas are rough and a deep turquoise colour. The sky above is shades of grey with paler clouds. Although the yacht is travelling through rough seas, we feel that she is safe. This is a dramatic yet very elegant piece. 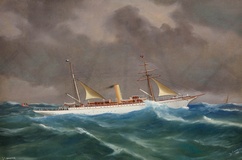