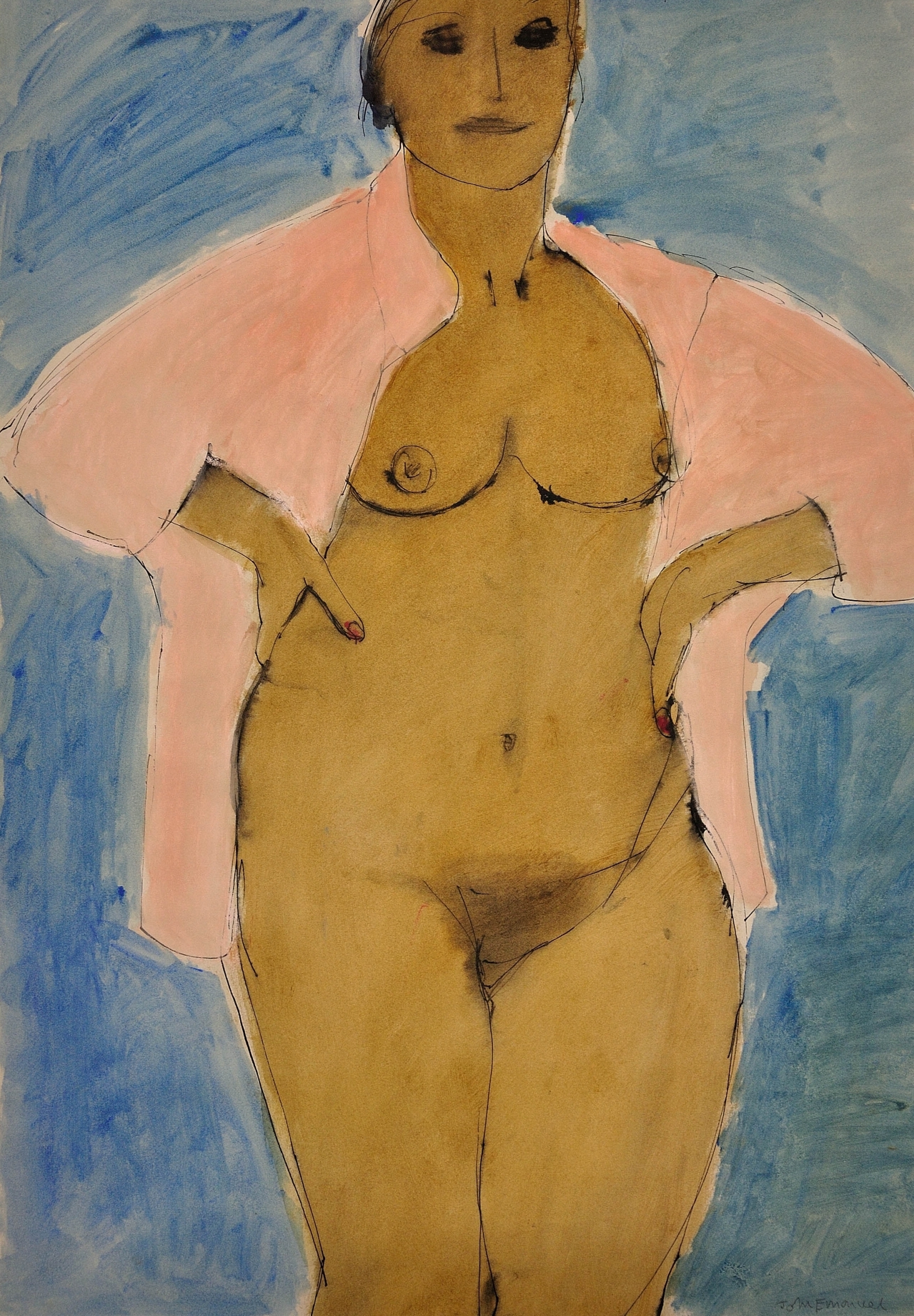 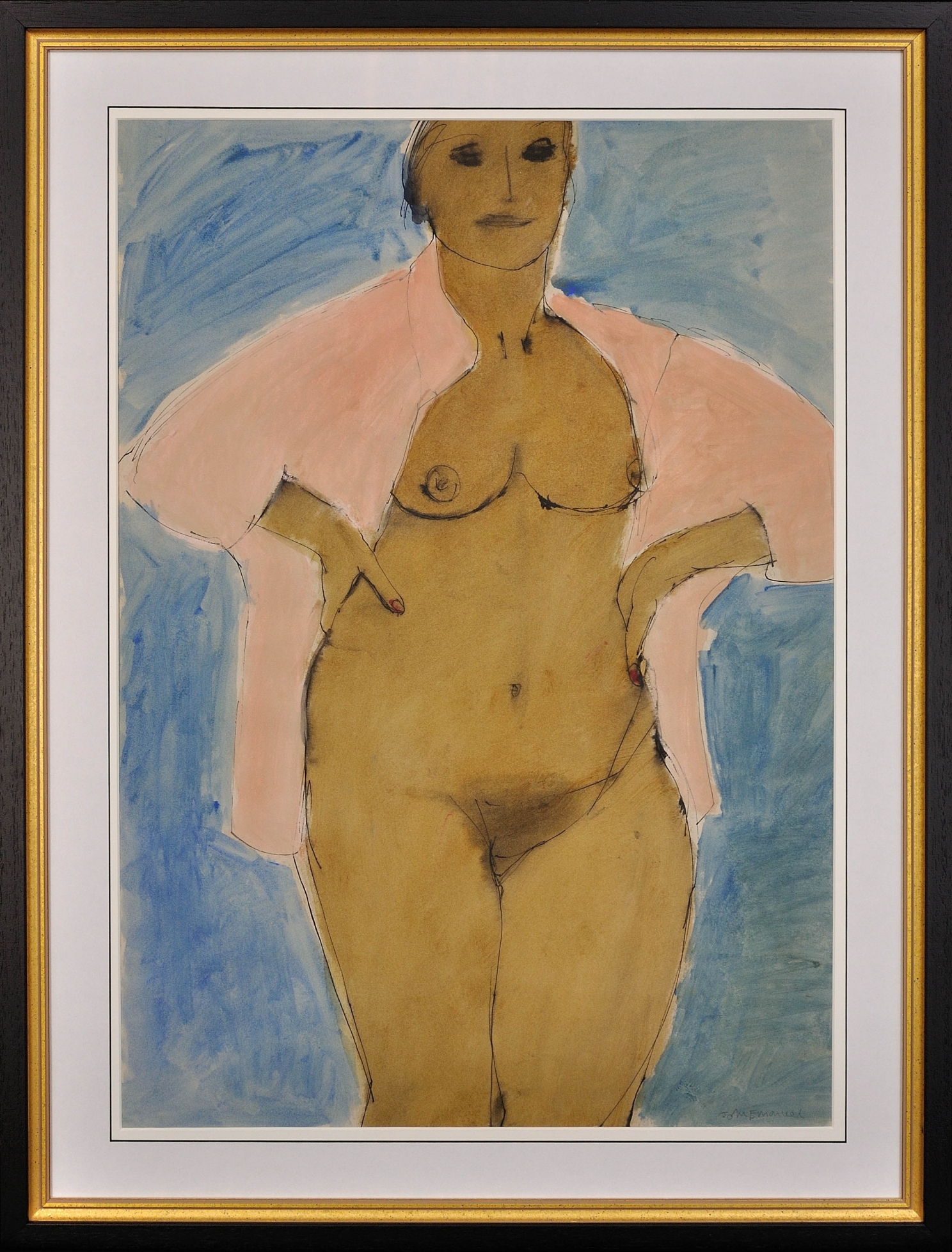 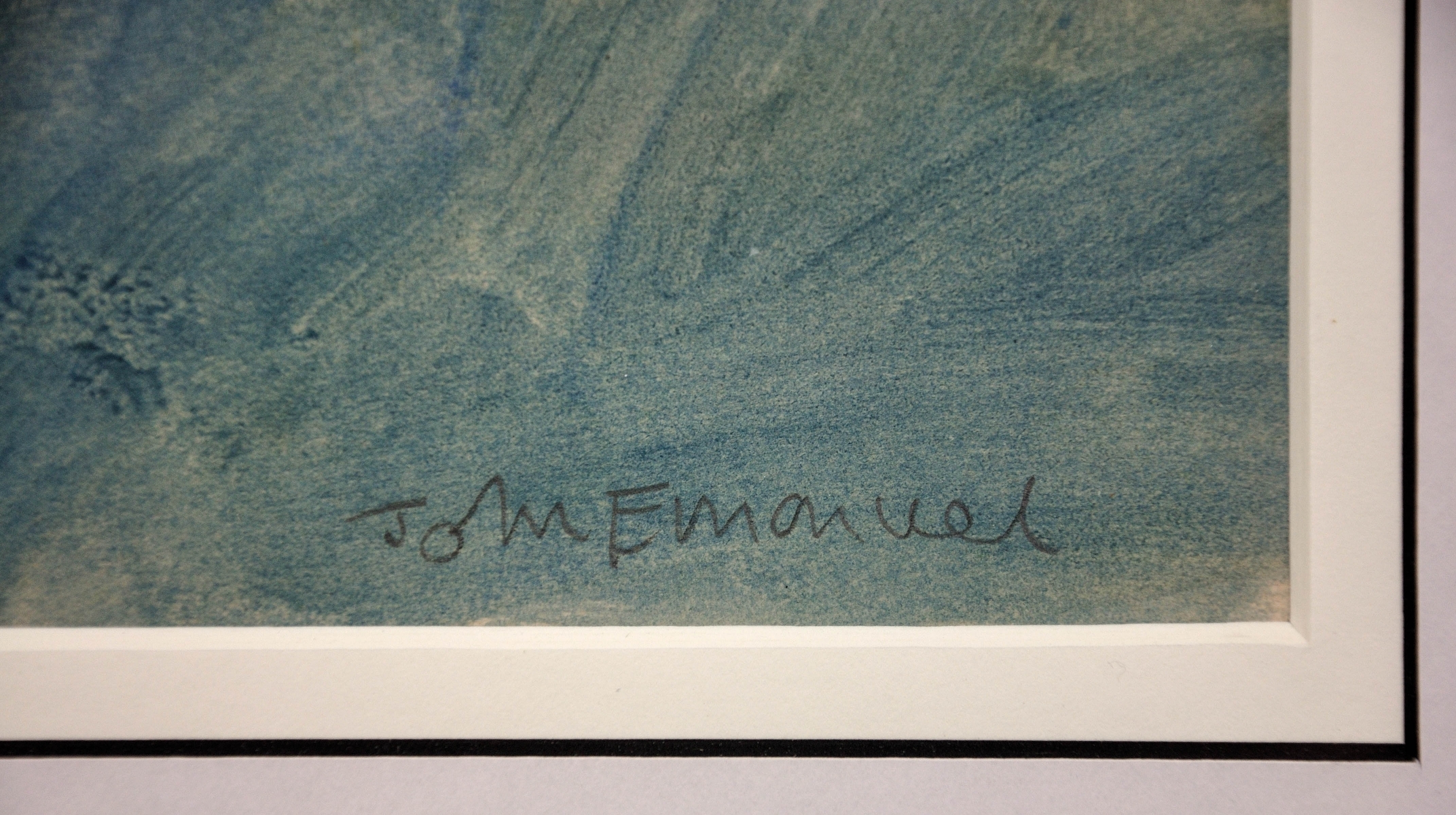 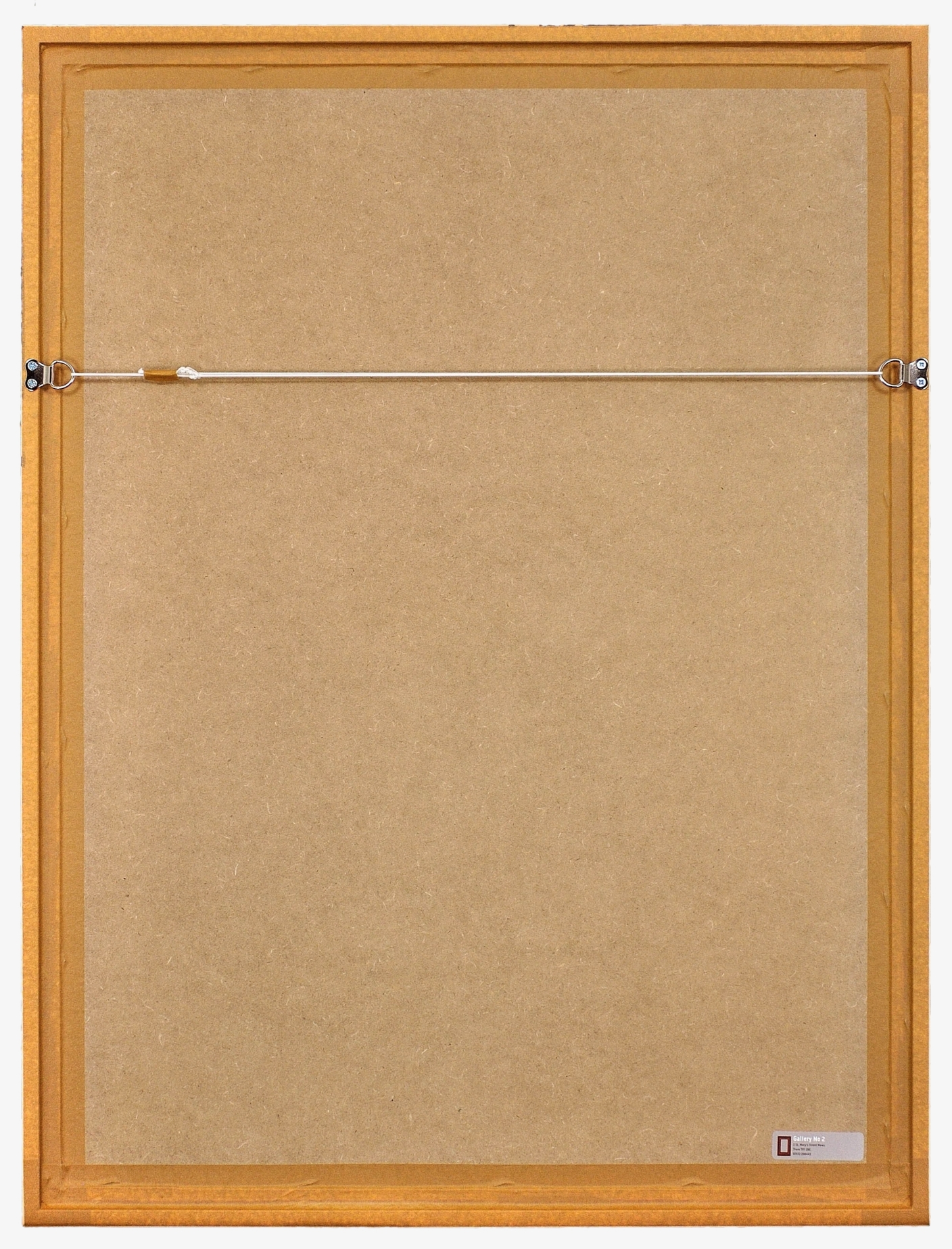 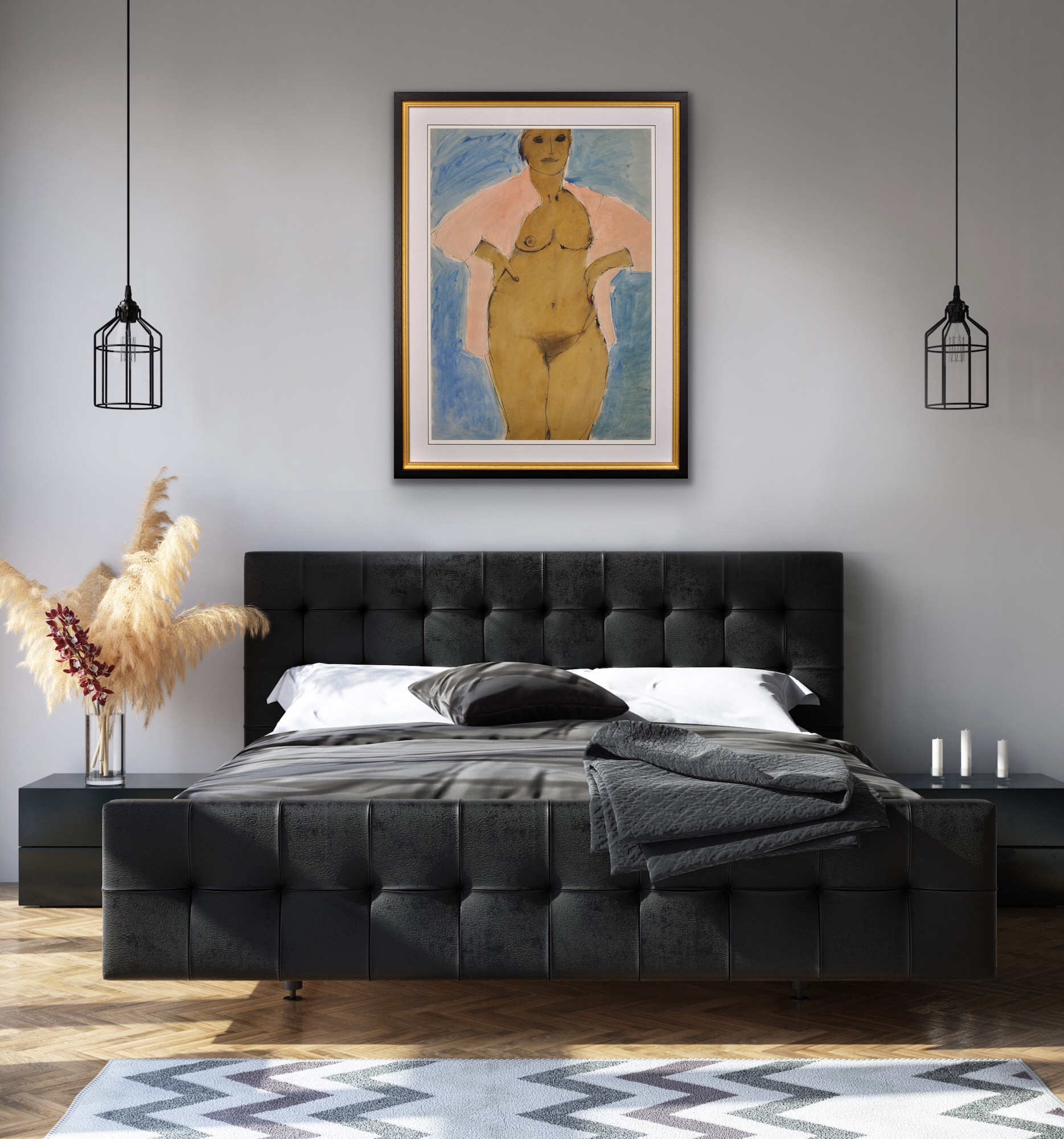 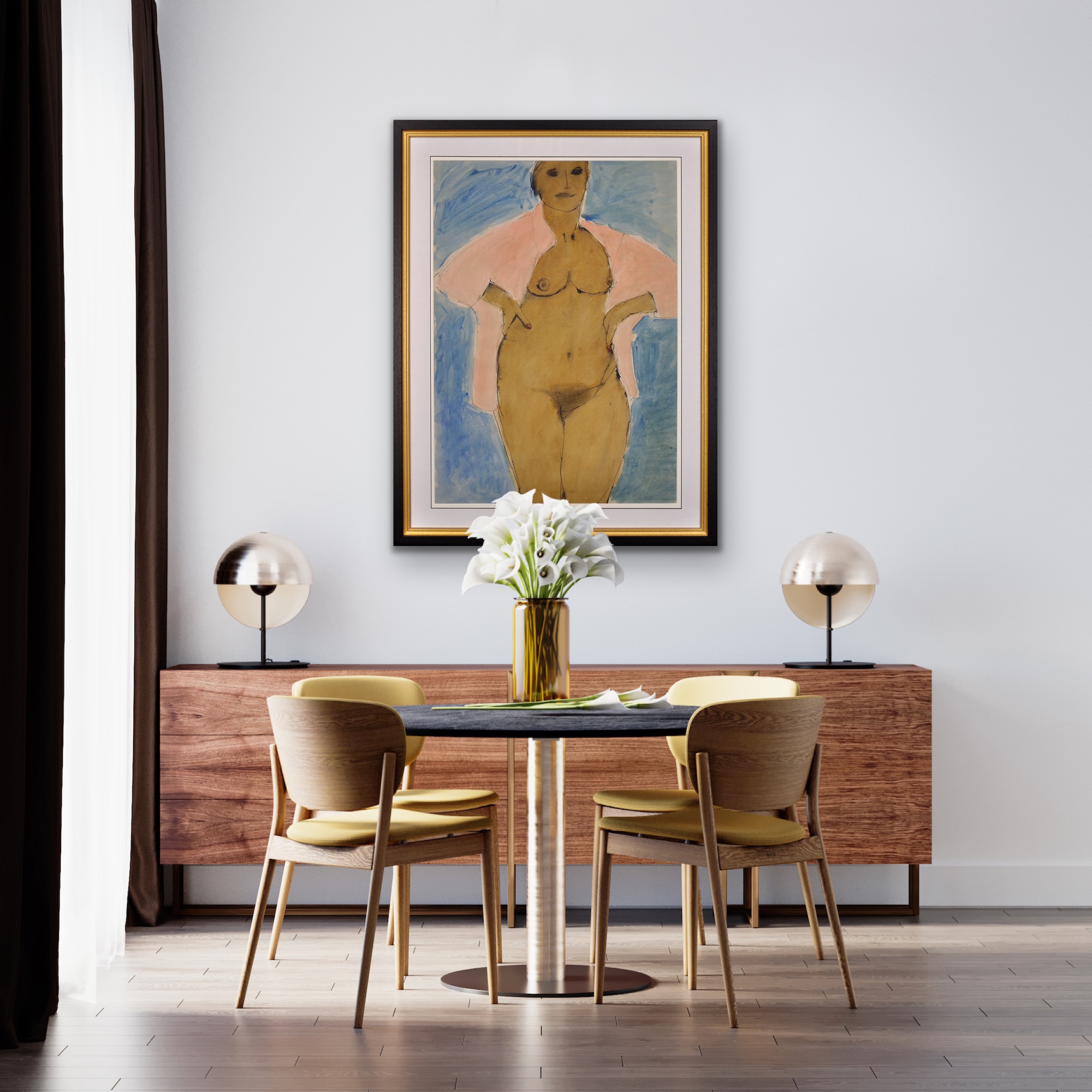 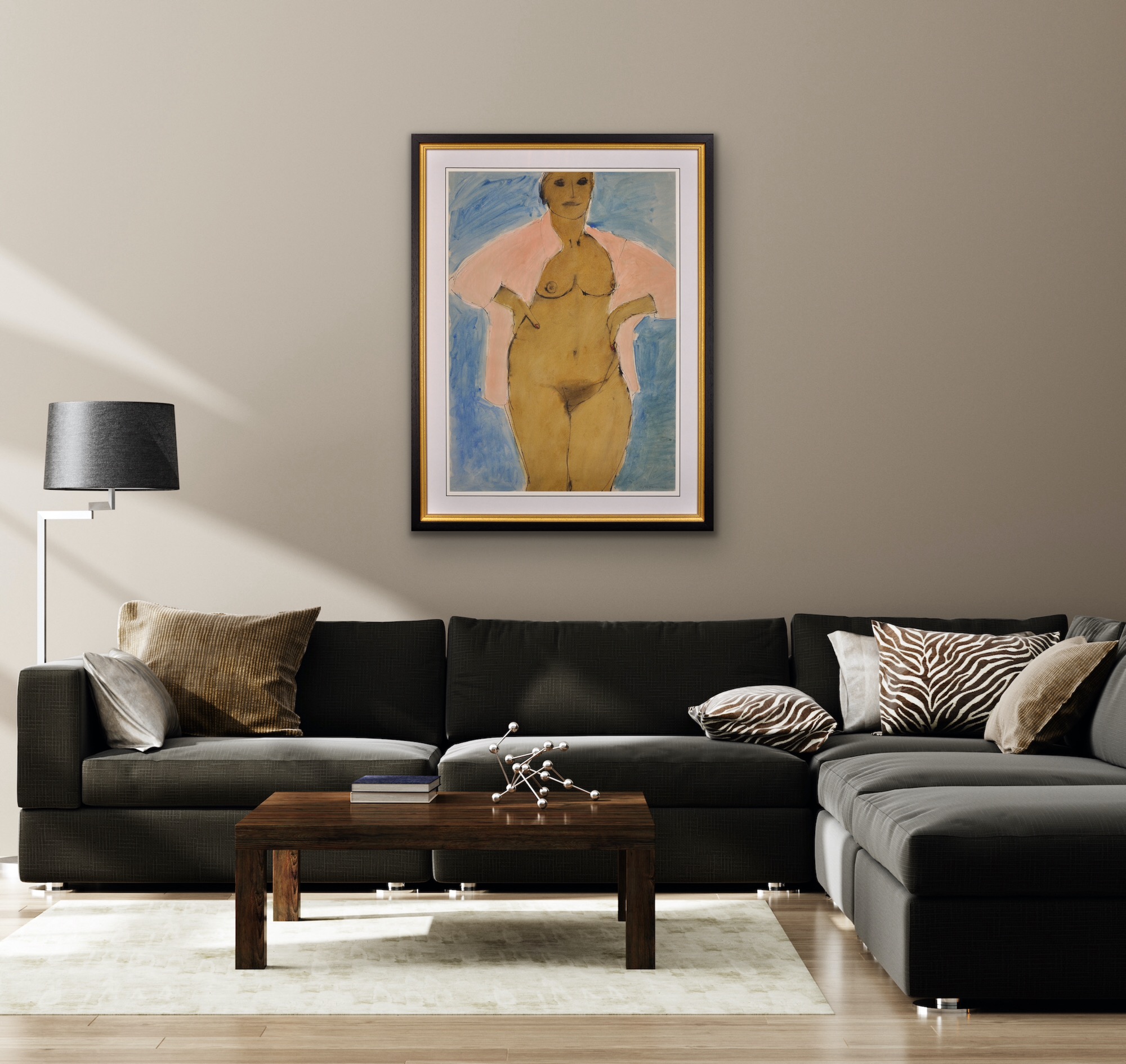 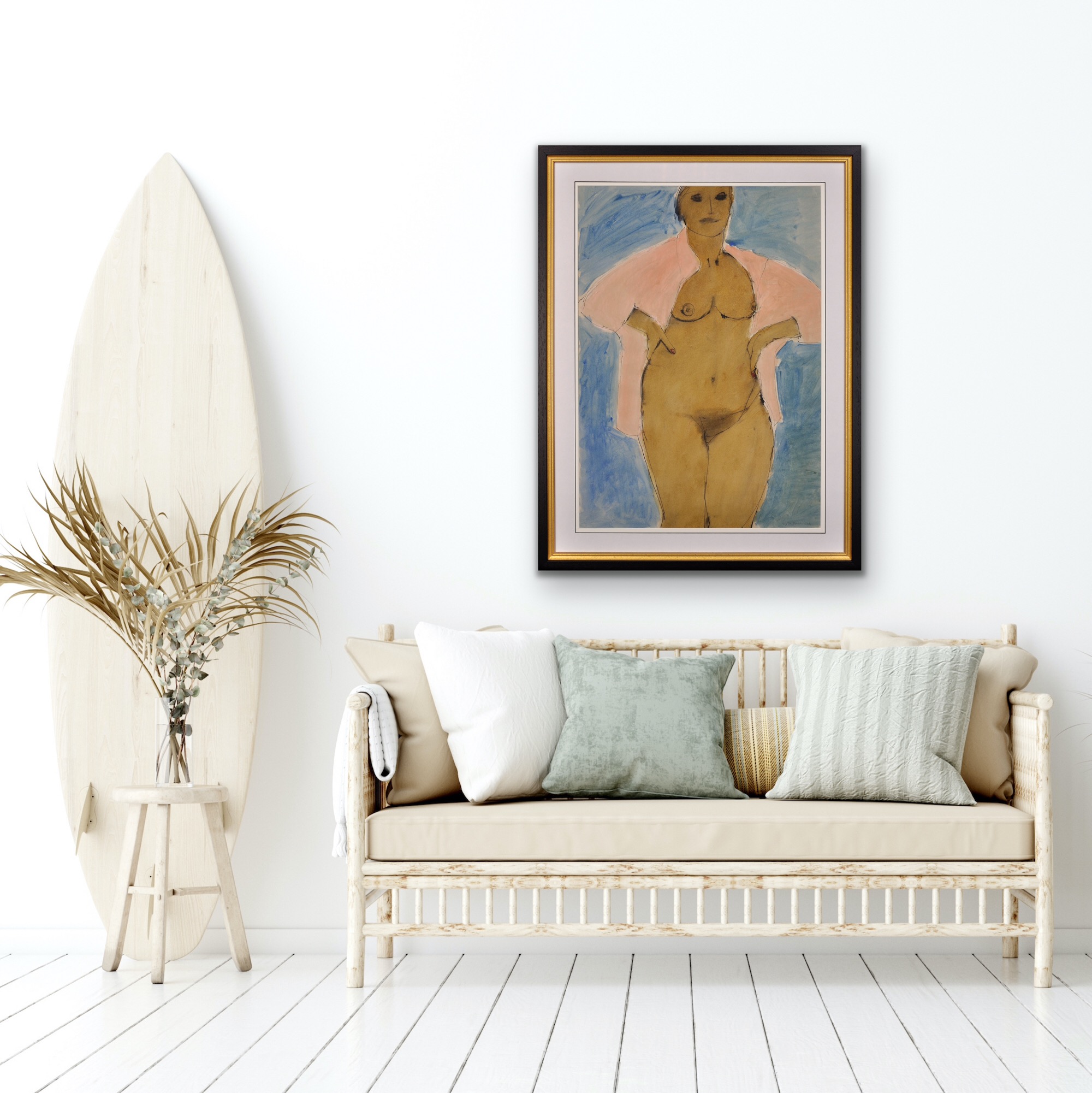 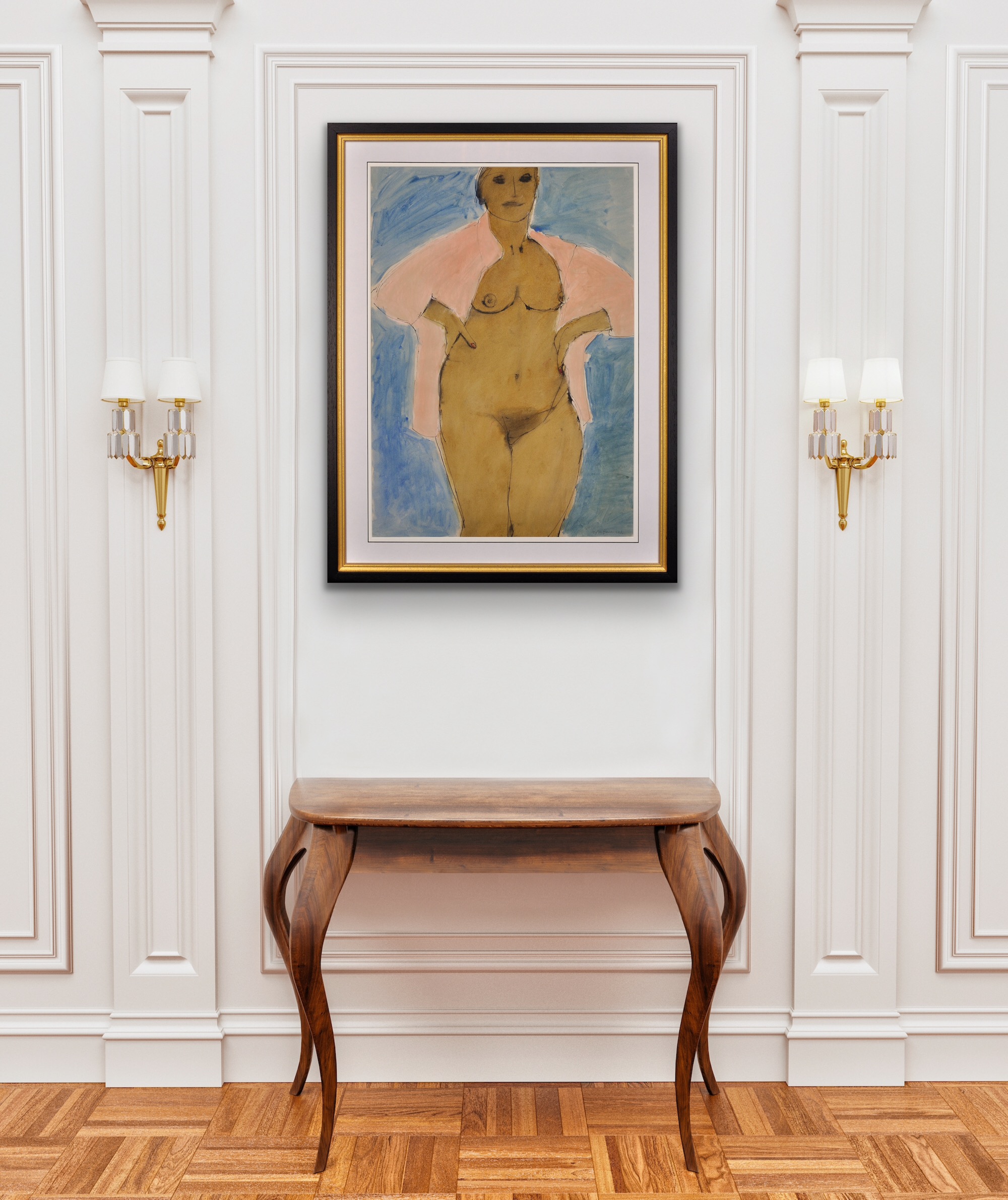 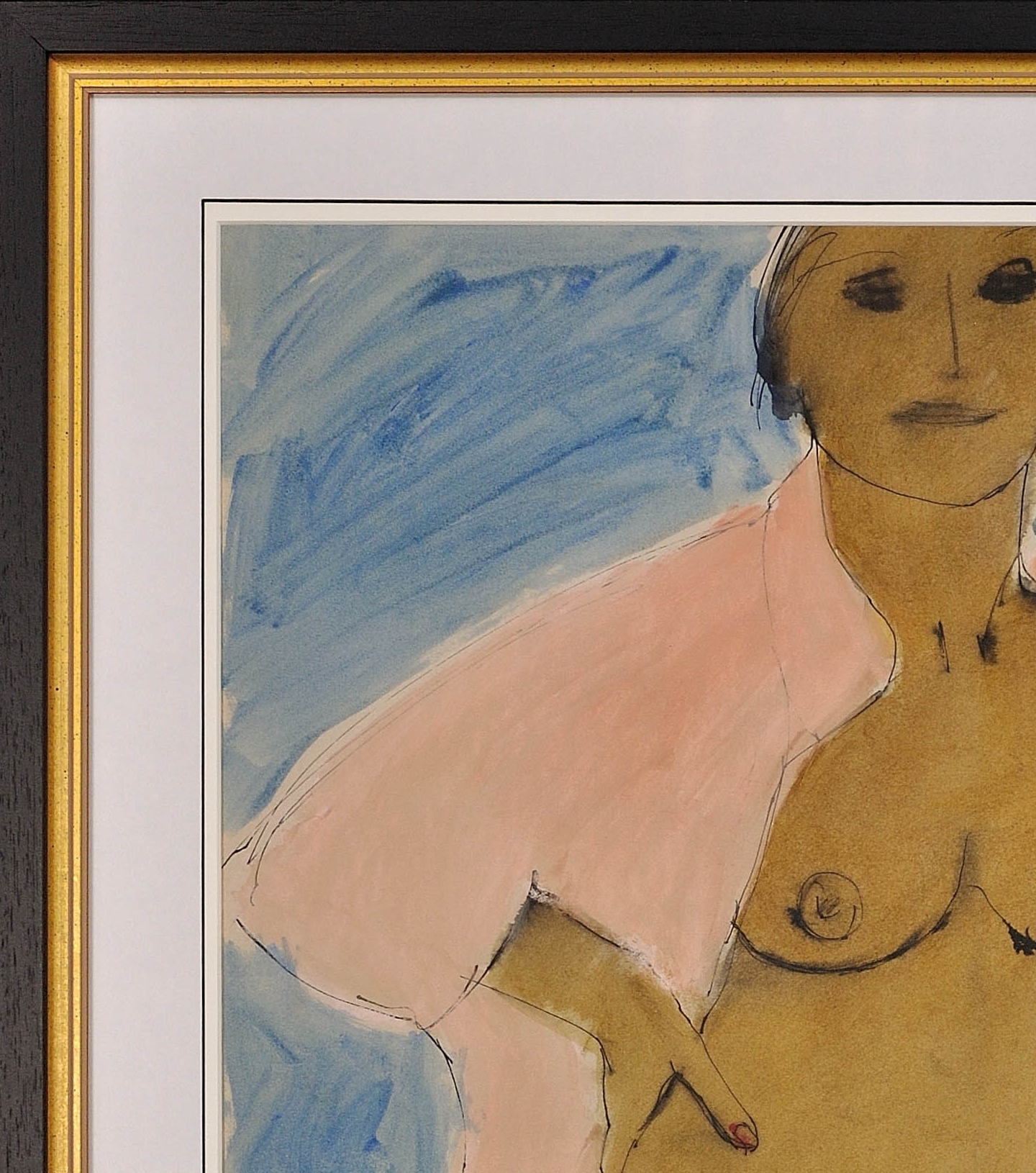 I Can’t Stay Away From You.

Available for sale from Big Sky Fine Art is this original painting by John Emanuel dating from the 1980s.
The painting is presented and supplied in a sympathetic contemporary frame (which is shown in these photographs), and behind premium anti-reflective glass with UV Protection greater than 70% (Artglass AR 70™).
This vintage painting is in very good condition, commensurate with its age. It wants for nothing and is supplied ready to hang and display.
The watercolour is signed lower right.

John Emanuel is an accomplished English artist in oils and mixed media. He was born in Bury, Lancashire in 1930. With the advent of the Second World War his parents moved back to Barrow in Furniss where both sets of his grandparents lived. John was however immediately evacuated to a farm on Shap Fell. After leaving school he served an apprenticeship in decorating, signwriting and graining and then completed National Service with the army in Hong Kong.

John’s introduction to art, in particular painting, was gained through a series of talks given by a lecturer from the Extra Mural Department of Manchester University and Harry Thubron, Leeds University. In 1964 his interest in art deepened and he moved to Cornwall, initially making a living as a sign-writer to support his family. He developed his drawing and painting during his thirties and then began to paint seriously. Although he had no formal art training, he was helped by artist friends such as Dick Gilbert and later Denis Mitchell, John Wells and Alexander Mackenzie. He did not show his work for another decade, having his first solo exhibition in 1975.

John Emanuel’s talent was quickly recognised: he was a founder member of Porthmeor Printmakers and was commissioned by Tate St Ives to make an etching for the gallery opening in 1993. He was made a member of Penwith Society of Artists and of Newlyn Society of Artists, of which he is a former chairman. He has exhibited widely in Cornwall and other parts of the UK, including Bath, London, Winchester, Harrogate, Cockermouth and Marlborough. He has also exhibited as far afield as New York.

Emanuel works in a variety of media; including charcoal, oils, mixed media and linotypes. His preferred medium is oil paint using hand and mould papers laid down on archive quality board.

His work has a strong consistent style, with a recurring theme of the figure. This is often set in a stylised yet recognisable landscape so that the contours of the figure combine with those of the earth or sea, exploring the context of relationship with natural surroundings. His work sometimes captures the extraordinary light on the coastline of the Penwith peninsula, although he has also travelled to other areas of outstanding natural beauty to incorporate these into his paintings, such as the Lake District in Cumbria, the isle of Mull and the Isles of Scilly.

Emanuel is well known for his studies of the female nude in particular, making studies from life, many of his long-time partner Janet Axten. His style is clear classical lines with a sculptural quality. His use of colour is restricted to specific compositional bands or elements of the images, enhancing its dramatic effect.

He says... “It is the figure, not the nude I am interested in..”. The art critic Frank Ruhrmund has observed that... “his works go beyond the nude. He has always striven to transcend the obvious and succeeded, and they have as much to do with the local landscape as they do with the human figure”.

Since the early 1980s Emanuel has lived in St Ives and worked from a studio, previously used by the sculptor John Milne, which has a spectacular view over Portmeor beach. Today his work is held in private and public collections worldwide, including Cornwall County Council Schools Library Service and Parnham House, Beaminster.

This original watercolour painting is by British artist John Emmanuel and was created in around 1980, making it vintage in style and age. It depicts a mature woman wearing only an open pink shirt, exposing the front of her body. She is standing with her hands on her hips looking directly at the viewer in a pose which is both confident and engaging. She has a slight smile on her lips and looks almost amused. Her figure fills the frame, as if the viewer has zoomed in on her image, giving a sense of intimate presence. It is a calm, warm and sensuous image, conveying an honesty and connection rather than an idealised image. The colour of the woman’s skin is warm, against a plain blue background. She is wearing pink nail varnish to match her shirt. Many of Emanuel’s nude figures are depicted as an integral part of a landscape, but this is a figure to be appreciated for her beauty alone.

I Can’t Stay Away From You. - Emanuel, John