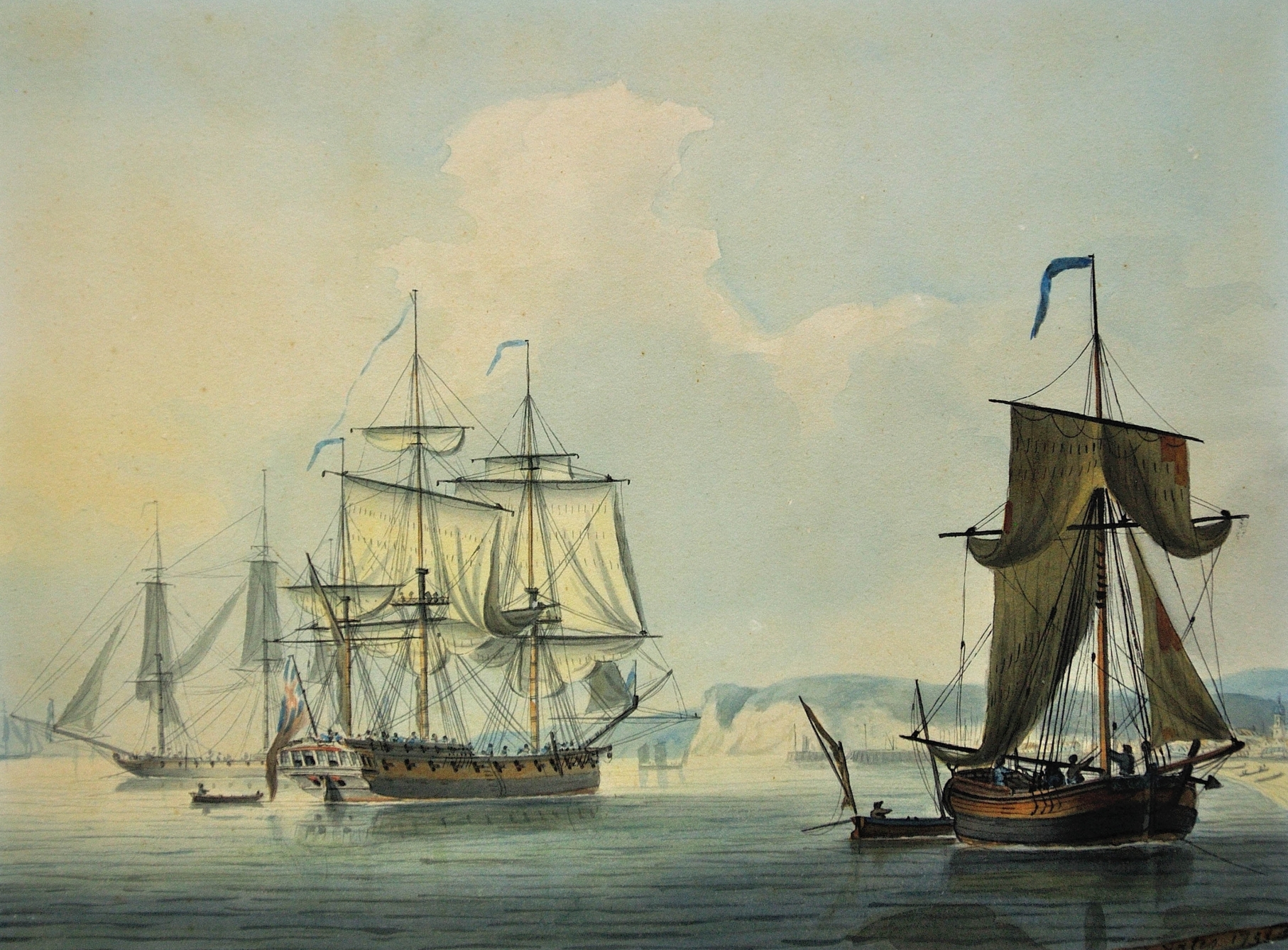 Frigates in a Calm off Dover with a View of the Town and Pierheads. 1791.

Available for sale from Big Sky Fine Art; this original painting by Lieutenant Thomas Yates RN dated 1791.
The watercolour is presented and supplied in a sympathetic frame dating from the 1950s or 1960s (which is shown in these photographs), mounted and behind glass.
This antique painting is in very good condition, commensurate with its age. It wants for nothing and is ready to hang and display.
The watercolour is signed and dated 1791 lower right.

Lt. Thomas Yates was a talented and interesting artist, whose works are stylish and accurate. Unfortunately, his works are relatively rare because of the untimely nature of his death.
This Lieutenant is not to be confused with a Major Yates of later date.

Yates was apprenticed to John Mitchell on 25 November 1774 and became accomplished as both an artist and an engraver. He engraved and published from his own drawings a set of ‘Celebrated Naval Actions’. When the French Revolutionary Wars began, he started to publish pictures of actions from his own drawings.

Yates was appointed to the rank of Lieutenant in the Royal Navy in 1782 and, in common with other officers of the era such as William Elliott, Thomas Luny, Nicholas Pocock and Rear-Admiral George Tobin, he made numerous studies and sketches while travelling the world in the line of his duty. He had an expert’s eye for the technicalities of sailing ships and his portrayal of them is considered extremely good, with meticulous and accurate detail. His experiences of sailing in the navy also meant that he could also capture the sea and sky in all their climatic manifestations. His vessels in stormy seas have a real sense of movement, set under glowering skies, but he was equally adept at the portrayal of calm seas with ships at anchor, which have a luminous quality.

Sometime after attaining the rank of Lieutenant Yates resigned his commission to pursue a career as a painter. He soon exhibited several of his works in London, including 9 at the Royal Academy between 1788 and 1794. His first work there was ‘View of the Bay of Bull, on the coast of Newfoundland’, and he is listed as Lieut. Thomas Yates R.N. Painter (An Honorary Exhibitor).

Yates was married to a famous and beautiful dramatic actress of the time who had appeared in Arthur Murphy’s dramatic play the Grecian Daughter which had opened at Drury Lane in 1772. This play was immensely popular at the time.

Yates also had a famous great uncle, Richard Yates (1706-1796), who was celebrated as a comedian and comic actor and it was this connection that led to his untimely death. When his uncle died Thomas Yates and his wife were living in a London house that belonged to the uncle. The estate was left to the housekeeper, one Elizabeth Jones, but Thomas Yates was to have the right to reside there too. An acrimonious dispute arose as to ownership of the property, as Yates was the nearest living relative. One August afternoon in 1796 Yates took a post-lunch stroll around the garden of the house and Miss Jones locked the doors to prevent him re-entering. She had hired two men to protect herself and when Yates attempted to climb in through a kitchen window one of these men, a Mr Sellers, shot Yates, who subsequently died of his injuries three days later. It was claimed that he was mistaken for a burglar. However, whilst this was happening Yate’s wife was on her way to the house with a police constable, sent for by her husband who believed that the hired men were a threat to him. Mr Sellers was arrested and there was a high- profile court case which caused a great stir in Georgian London. Mr Sellers was found guilty by a jury of manslaughter, fined one shilling and imprisoned for six months. Miss Jones was granted the estate. Whatever the merits of the dispute, a very promising artistic career came to an abrupt end.

Today, examples of Thomas Yates’ works are held by the National Maritime Museum at Greenwich and the British Museum.

This attractive watercolour painting depicts three sizable frigates at anchor in tranquil seas. There are two smaller rowing boats, with figures visible, perhaps providing supplies for the larger vessels. The frigates have tall masts and cream coloured sails, with blue flags flying from the tallest mast. They are shown in great detail and accuracy. In the background are the distinctive white cliffs of Dover, with the English mainland beyond. The palette is muted, and the overall ambiance is one of calm and order. 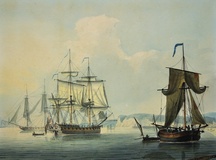 Frigates in a Calm off Dover with a View of the Town and Pierheads. 1791. - Yates, Lieutenant Thomas