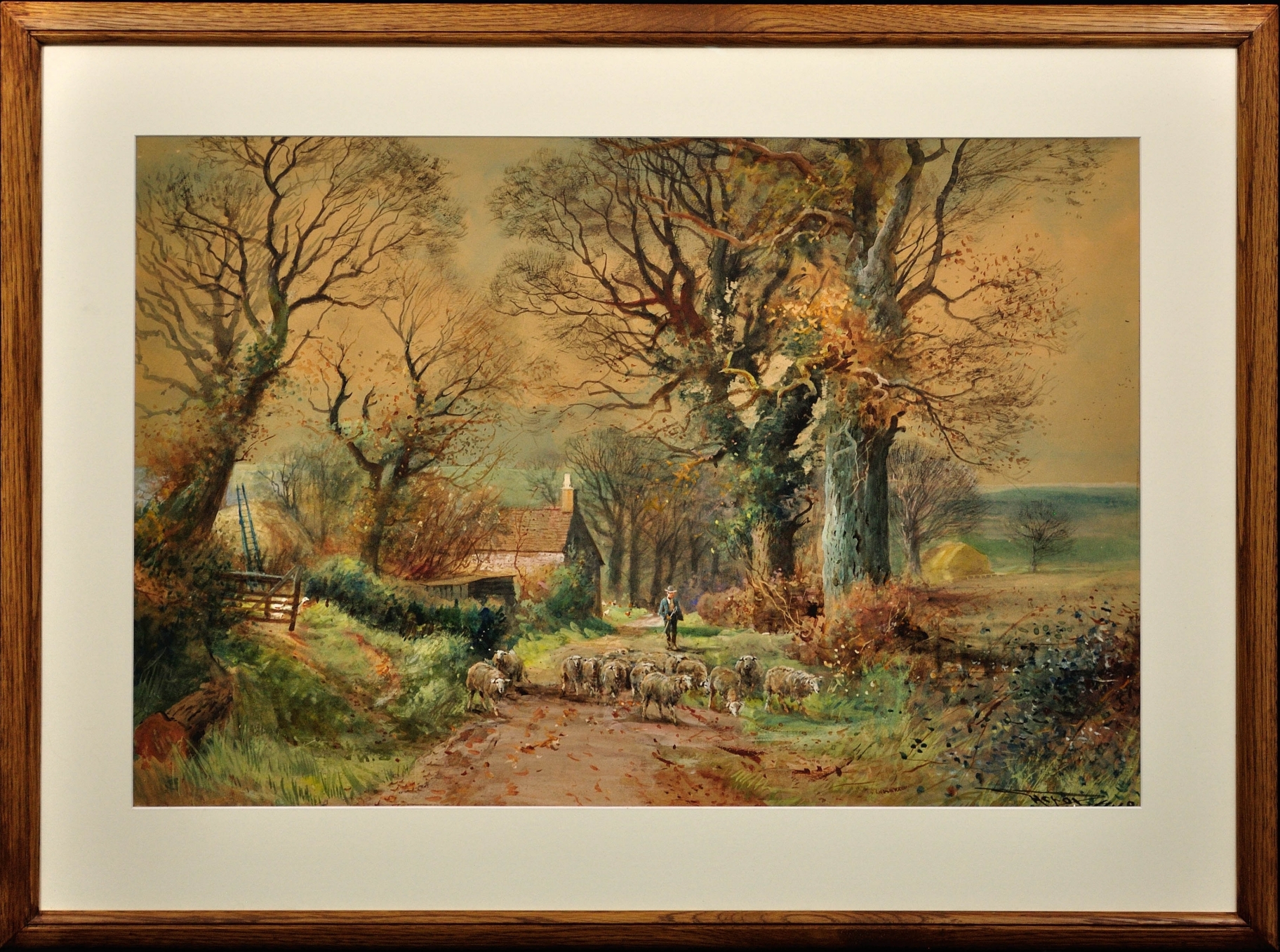 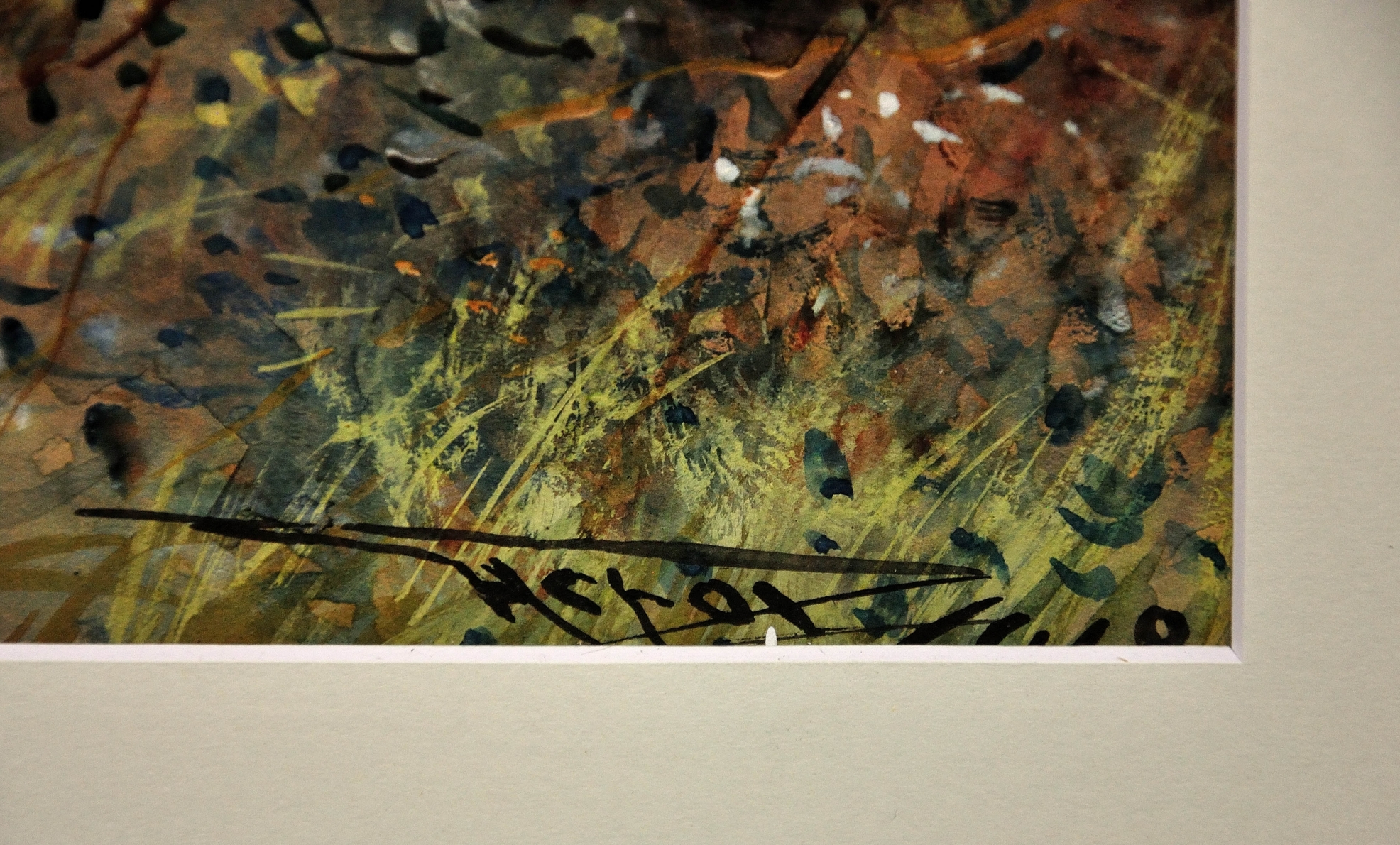 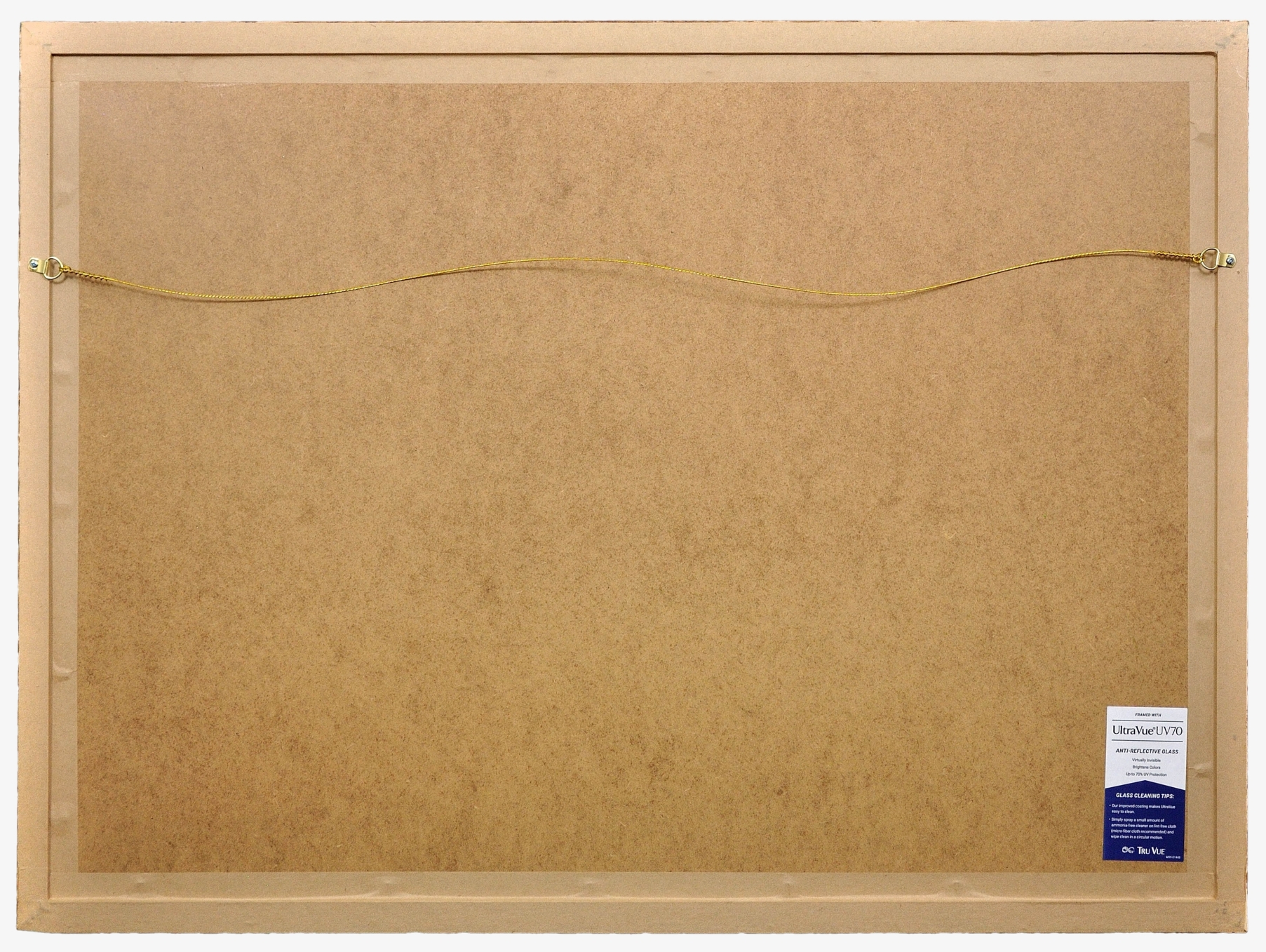 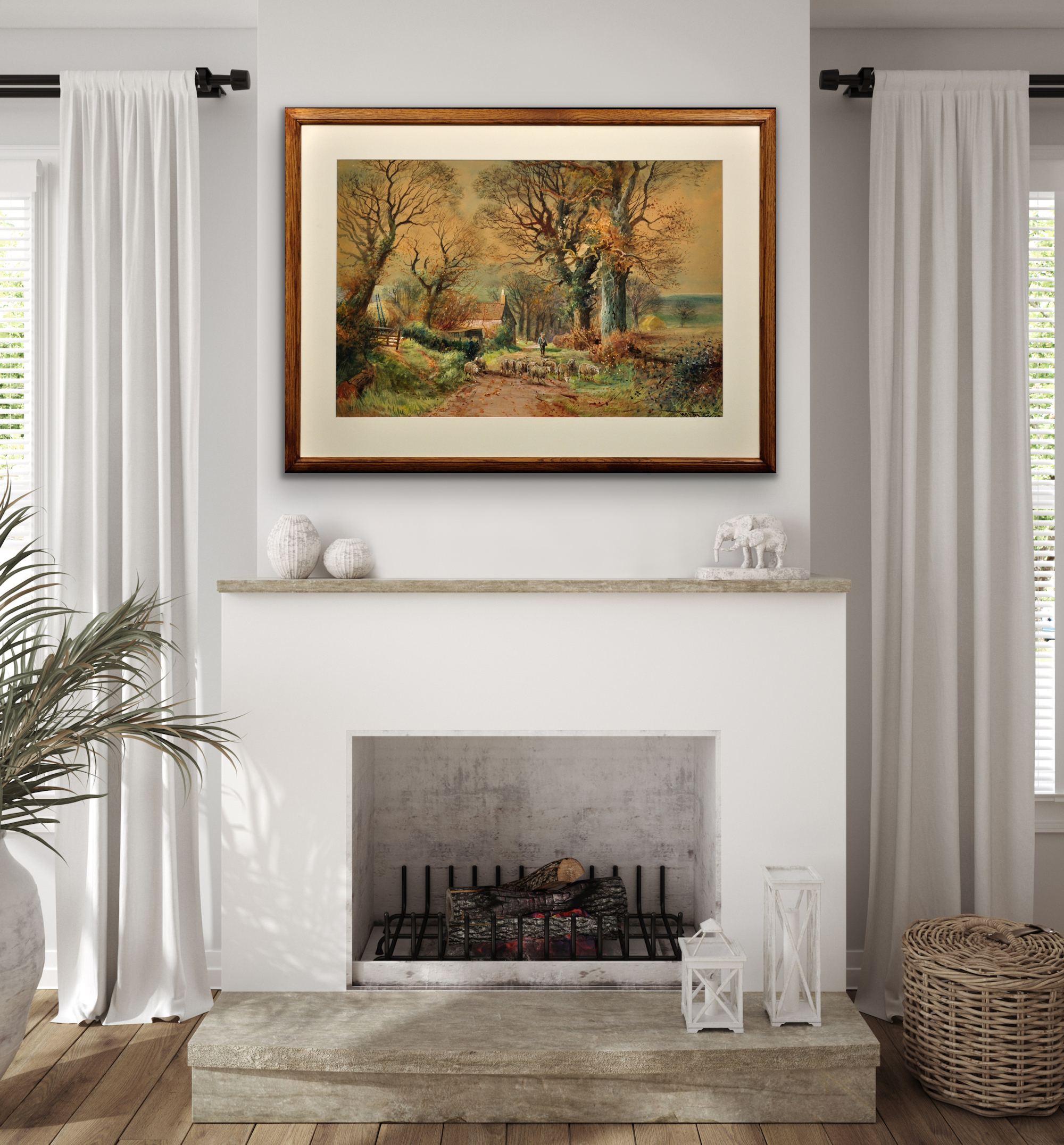 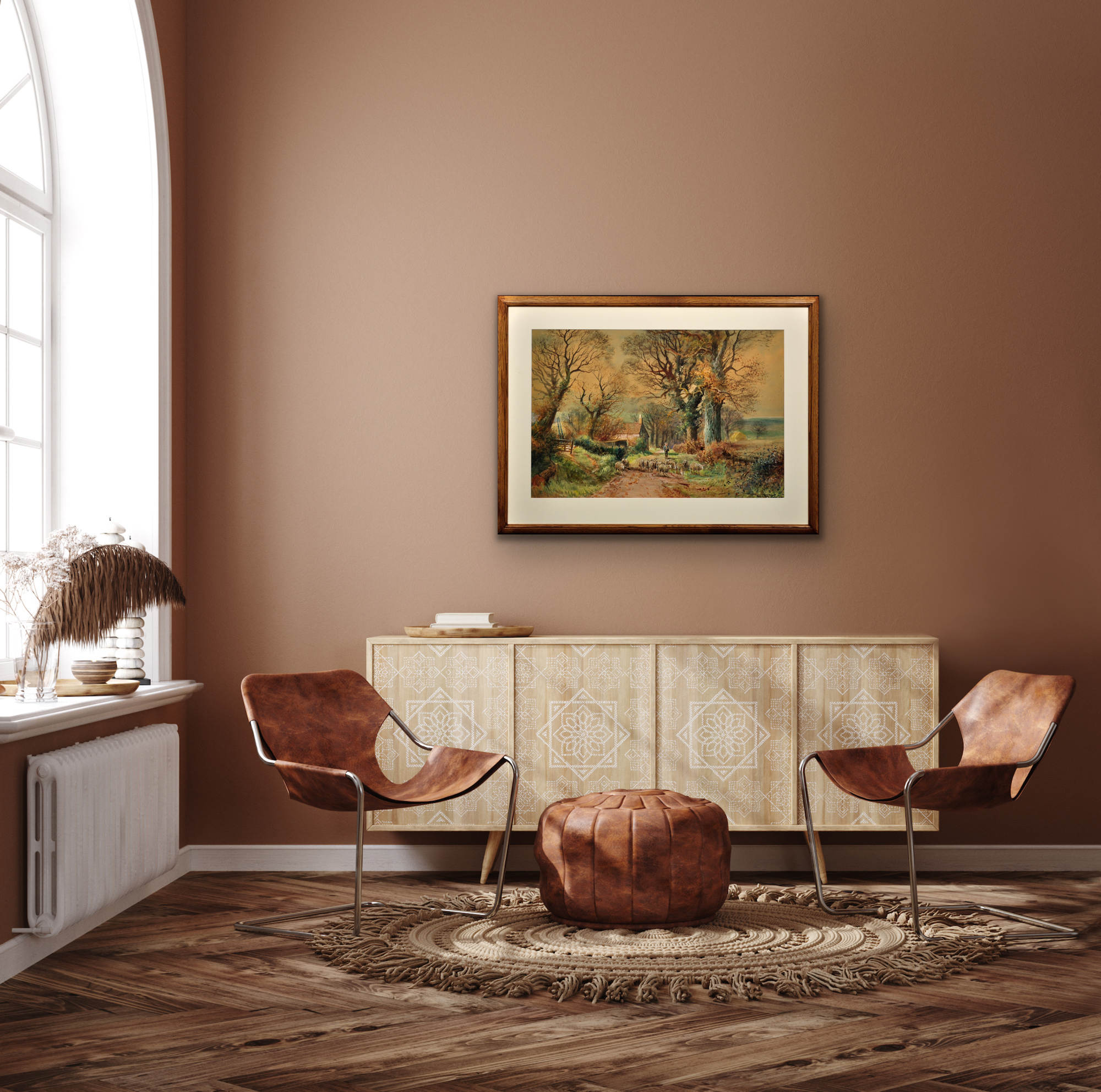 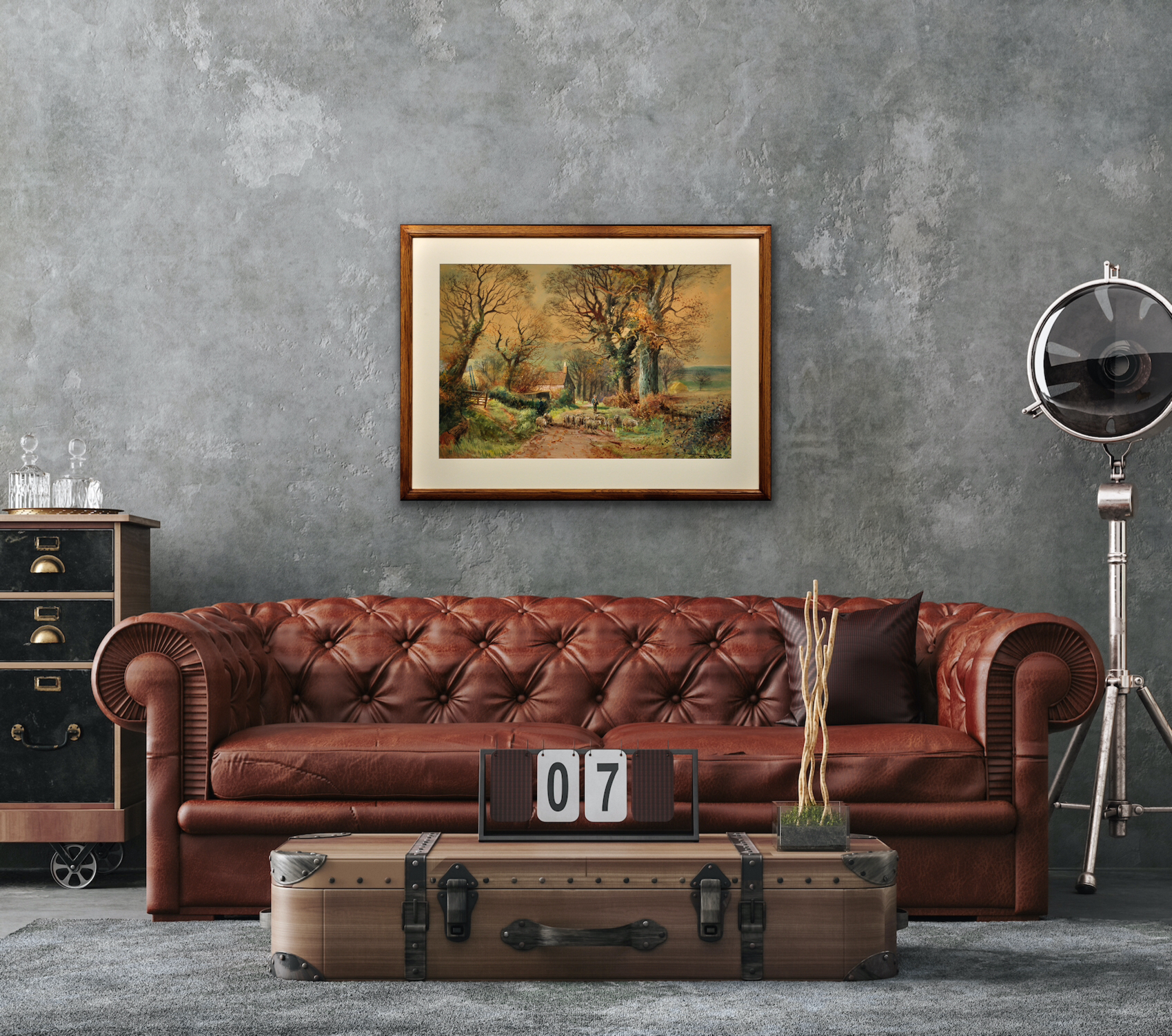 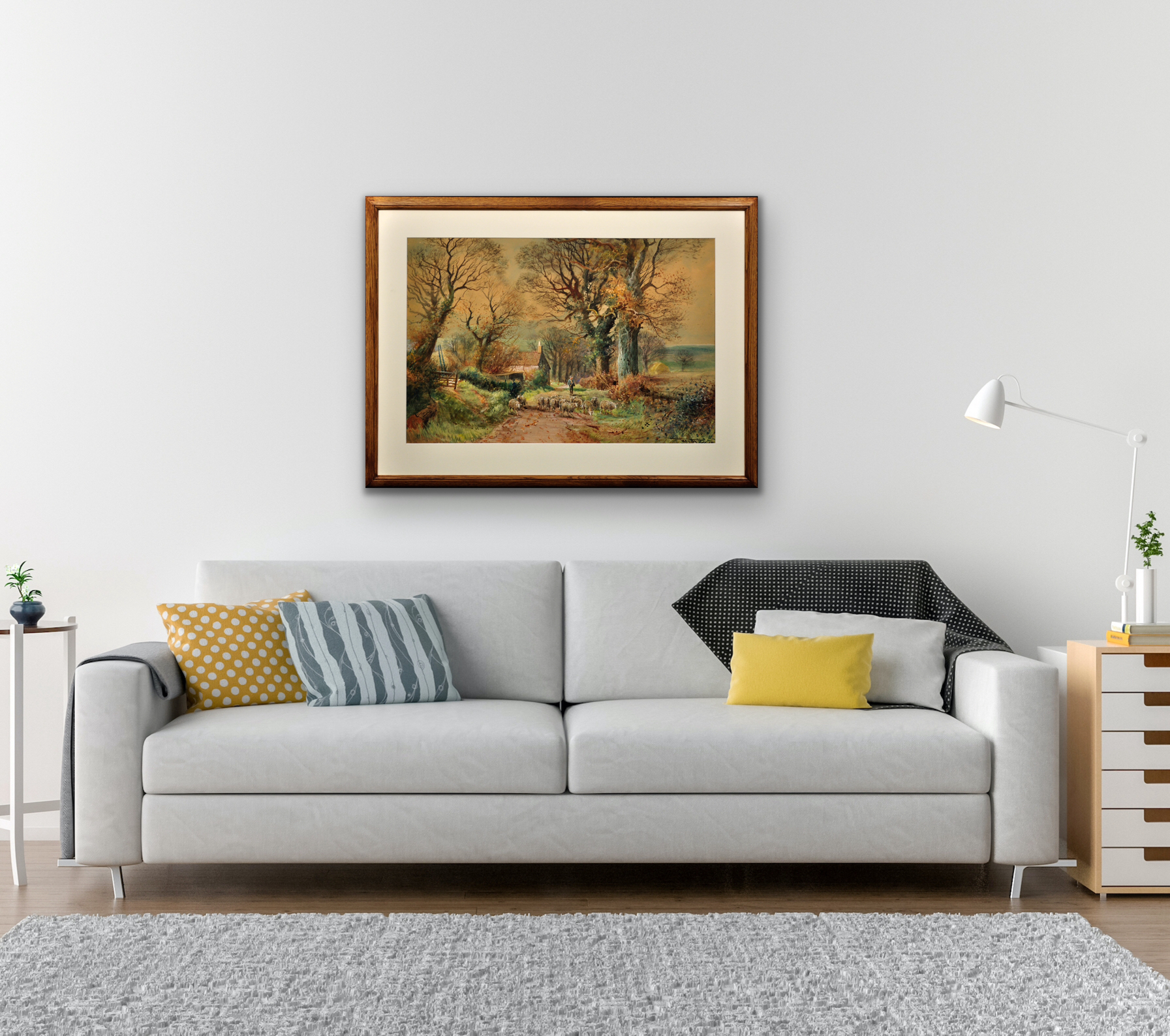 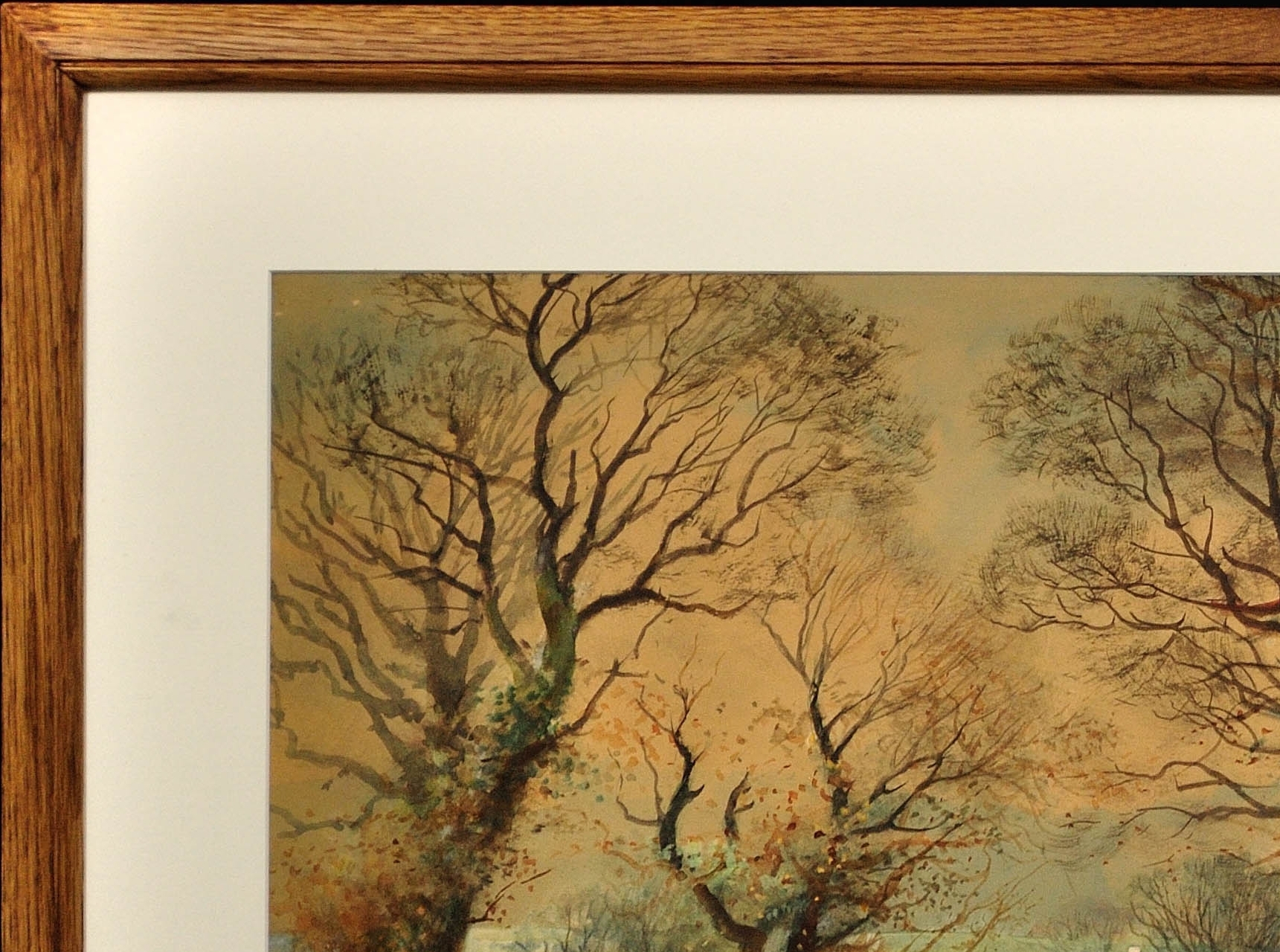 Available for sale from Big Sky Fine Art; this original painting by Henry Charles Fox dated 1918.
The watercolour is presented and supplied in a sympathetic new replacement frame (which is shown in these photographs) that suits the artwork’s colour palette and behind non-reflective Tru Vue UltraVue® UV70 glass.
This antique painting is in very good condition, commensurate with its age. It wants for nothing and is ready to hang and display.
The watercolour is signed and dated 1918 lower right.

Henry Charles Fox was a prolific, popular and well-respected English landscape artist. He was born in London on 1 March 1855. His father was a merchant banker. In 1880, at the age of 25, he had his first picture accepted at the Royal Academy and went on to exhibit another 20 works there up until 1913.

His reputation spread throughout the provinces and he exhibited in such prestigious galleries as Suffolk Street, the Royal Institute, the Royal Scottish Academy, Royal Society of British Artists, Royal Hibernian Academy, Glasgow Institute of Fine Arts, Royal Institute of Painters in Watercolours and Manchester City Art Gallery. He was well-respected as an artist among his peers and was elected a full member of the Royal Society of British Artists (RBA) in 1889. The following year he exhibited a total of 113 paintings there.

After 1913 Charles Fox was a well-established artist and did not feel the need to exhibit any more, although he continued to paint and sell his work to within a couple of years of his death. Fox’s paintings are regarded as well composed and balanced with a skilful use of toning and light. His palette is typically that of the genre artist, with the use of soft reds, earthy browns and rich greens to give his works a warm and peaceful feeling under large skies.

Charles Fox is best known for his rural landscapes in watercolour, but he also painted in oils and had a series of large etchings published by Gladwell Brothers, London, in the 1880s. Gladwells also held an exhibition of his works entitled “Rural London – Sketches and Drawings” in 1885.

Charles Fox is recorded as living at various addresses in the period 1880-1898, but then settled at Oakleigh, Fassett Road, Kington on Thames where he remained until at least 1922. Shortly after this he moved to Billingshurst in Sussex and he died at Horsham on 30 April 1929.

Fox specialised in rural scenes, depicting the farms and ordinary farm workers engaged in their daily toils, much in the tradition of his contemporary Dutch genre painters. Against the backdrop of the industrial revolution, he was aware that during his lifetime English rural life was changing out of all recognition. He tried to capture in his delicate watercolour works the idealised dream of the perfect English countryside as it was during Victorian times. In doing so he travelled widely across the south of England, carefully observing and painting in Surrey, Berkshire, Kent, Sussex and Dorset. His paintings were popular in the early 1900s because of their sense of tradition and tranquillity in a changing world. Today they are highly collectable because they provide us with a beautiful record of rural life as it was at the turn of the twentieth century. His works are held by the Lytham St Annes Collection, Reading Art Gallery and the museums of Montreal and Sydney.

This original watercolour painting depicts a scene on Plaisters Lane in the ancient and picturesque village of Sutton Poyntz in Dorset. It is signed and dated by the artist on the lower left side. Sutton Poyntz nestles below the South Ridgeway, which follows the tops of the hills seen in the background of this painting, mid-way between the seaside town of Weymouth and the market town of Dorchester. Plaisters Lane winds its way from the end of Sutton Poyntz, up the chalk hills towards Dorchester. This scene captures the lane before its steep ascent. It depicts a flock of sheep being walked towards the lower ground, with a shepherd behind them. The figure wears a blue jacket, brown trousers and a hat. He carries a shepherd’s crook in his right hand. Behind the shepherd, on the grassy verge to the left we spy half a dozen hens, wandering free. There is a stone cottage to the left, with a gateway immediately after, through which we glimpse a traditional haystack with a ladder stacked against it. There is the outline of a further modest building set back in the fields to the right. Large aged trees line each side of the lane, which is still a modest earthen track. The palette used by the artist is one of warm ochres, varied greens and amber skies. From the appearance of the foliage and the presence of the haystack we know that this is late summer, early autumn. The overall mood is one of peace and simplicity. It is amazing to think that this idyllic rural scene was captured in 1918 at the end of the Great War and was not untypical of many small villages in southern England at that time. This is a piece of rural history, sympathetically and skilfully captured for prosperity.